Find a store Blog
‹ back
Home
Blog
News
Drama to the Very End!

Drama to the Very End! 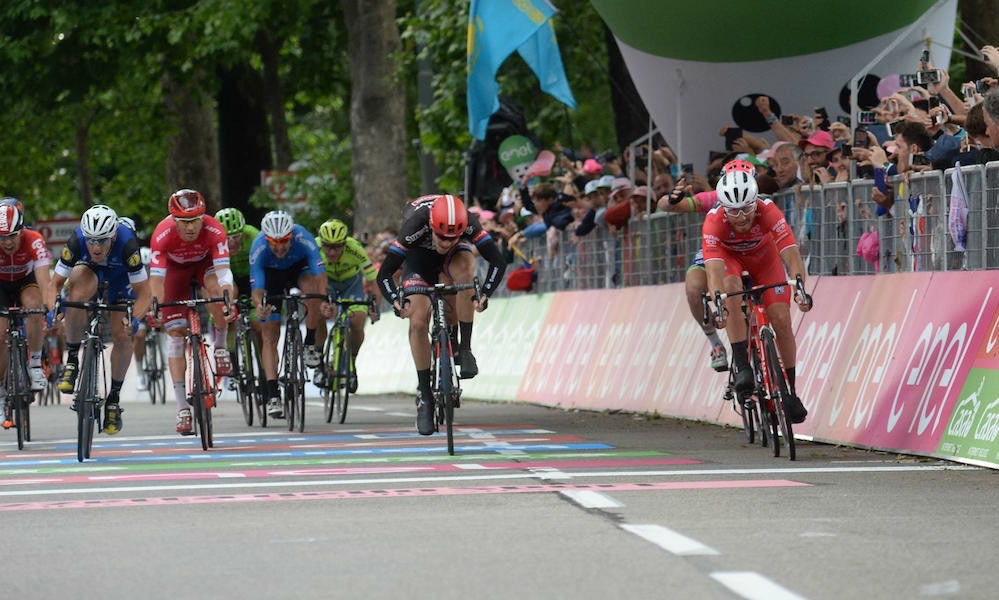 The 2016 Giro d’Italia had been over for 30 minutes, and yet the drama continued.

While one Italian, Vincenzo Nibali (Astana), was celebrating a second career Giro victory, another Italian, Giacomo Nizzolo (Trek-Segafredo) was in anguish after learning that the race jury had relegated him for an irregular sprint, taking away what would have been his first Giro stage win after nine second-place finishes.

Nizzolo was relegated for closing the door on Sacha Modolo (Lampre-Merida), impeding his sprint by veering him toward the barriers. Modolo stopped pedaling, and initially finished fourth in the sprint. German Nikias Arndt (Giant-Alpecin), who had finished second, was awarded the stage victory, with Matteo Trentin (Etixx-Quick-Step) moved up to second, and Modolo third.

“This is not the way I would have wanted to win a stage at the Giro,” Arndt said. “I wish I had won one before today: I’ve been hunting a win for three weeks. But the jury has made its decision and there’s nothing we, as riders, can do about it. I’m happy that I have a Giro stage win under my belt. I did a good sprint today, anyway.”

Making maters worse, Nizzolo, the points leader, had to then go on stage to receive the red points leader’s jersey. He has now won the maglia rossa two years in a row without a stage win.

“For me, nothing in particular has happened,” Nizzolo said after the relegation. “I obviously was on the left, and Modolo was behind me. I do not see the decision as just, but it is the decision. I go home knowing that I am deserving a stage win in the Giro d’Italia.”

Yes, even the 163km “processional” stage, from Cuneo to Torino, brought more crashes and more anguish at pro cycling’s most unpredictable stage race, with rain on the closing circuits provoking the race organization to neutralize the GC once the peloton had reached Torino. Riders could battle for the stage win and sprint points, but there would be no change on the classification, provided all riders crossed the finish line.

Everyone wouldn’t cross the line, however. A crash before the race reached Torino saw Danish rider Lars Bak (Lotto-Soudal) hit the ground hard, and leave the race with a fractured shoulder blade, multiple rib fractures, and a small pneumothorax (collapsed lung). Second-place finisher Esteban Chaves (Orica-GreenEdge) was also tangled up in that crash, but was unharmed and able to continue.

Another crash, with 25km to go saw Johann van Zyl (Dimension Data) leave the race in an ambulance, headed to a local hospital with a broken elbow. That crash also saw seventh-place finisher Rigoberto Uran (Cannondale) on the ground, with Chaves coming to a stop, and then waiting on his Colombian compatriot. After that, Sonny Colbrelli (Bardiani–CSF) hit the deck after clipping a spectator.

The day, however, belonged to Nibali, who crossed the line unscathed, surrounded by teammates with both hands in the air to take a fourth career Grand Tour victory — he won the Giro in 2013, the Tour de France in 2014, and the Vuelta a España in 2010.

“It’s a beautiful emotion,” he said. “Today I’ve won my second Giro d’Italia. I’m speechless. The crowd on the final circuit was enormous, and showed me great affection. My family is here, so I’ve been able to hug everyone. At the beginning of the race we’ve had a bit of rain, but with the nice weather at the end, my joy is complete. I’ve loved that moment.”

The ever-smiling Chaves was graceful in defeat. “I have learnt that dreams can come true,” he said. “If you keep working and never give up then your dreams can come true. That is what myself and Orice-GreenEdge are going to continue doing. I would not be in this position without the magnificent work and support of my teammates and everyone involved with Orica-GreenEdge, I would like to thank all of them. These last few days have been the best of my life. This is just the beginning, that is what I told my teammates and this is what I believe.”

Valverde, who was racing in his first Giro d’Italia, accomplished his goal of winning a stage and reaching the podium, one of only 16 riders, and four active riders — along with Nibali, Alberto Contador, and Joaquim Rodriguez — to have stood on the podium of all three Grand Tours.

“It’s been a great Giro d’Italia for our team,” Valverde said. “We’ve worn pink with Andrey [Amador], won a stage, fought for some more with second and fourth places… and at the end, after so many sacrifices, we took that third spot overall. Personally, I’m really happy with how the season is going for me so far, and also to have claimed that podium finish in my first-ever Giro d’Italia.”

Despite rainy skies greeting the riders in the morning, Nibali was all smiles wearing the coveted maglia rosa.

And though the final day of the Giro is usually a procession, and doesn’t often see attacks from the general classification riders, there still was a stage win up for grabs. The final stage traveled from Cuneo to Torino where the riders would complete eight laps of a 7.5-kilometer circuit around the city for a total distance of 163 kilometers.

As was fitting for this processional final day at the Giro, the start of the stage saw a peloton riding leisurely and talking amongst themselves. The rain put a damper on the goodwill of group, with slick conditions causing multiple crashes, even before the real racing began as the riders entered the finishing circuits.

As mentioned, Bak would not make it to Torino, forced to abandon after being involved in a crash.

Once onto the finishing circuit, the LottoNL-Jumbo duo of Jos van Emdem and Maarten Tjallingii attacked. Tjallingii would finishing the Giro the way he started it — attacking — after spending the second and third stages in the breakaway when the race visited his hometown of Arnhem, Netherlands.

The duo quickly established a gap of 30 seconds on the technical finishing circuit, which included a short climb and a small stretch of cobblestones.

With seven laps to go, five riders attacked out of the peloton, just as the race organization chose to neutralize the clock. All Nibali had to do at that point was finish the stage and he would be the Giro champion; time gaps would no longer affect the general classification.

Rain continued to fall on the riders, and though it was much lighter than it had been, the circuit was quite treacherous.

As the leading duo crossed the finish line with four laps to go, a crash occurred back in the peloton, which brought down Chaves and Uran. Both riders would remount their bikes and finish their remaining laps, but in no hurry at all with the general classification neutralized. Johann van Zyl would not be so lucky.

The chase group, led by Trek-Segafredo and Lampre-Merida, was brought back with 28km to go as the leaders held an advantage of around a minute over the peloton.

With 12 kilometers to the finish, van Emdem left Tjaalingii behind, but his advantage had shrunk to under 20 seconds.

As the bell rang for the final lap, van Emden held an advantage of only 10 seconds over the chasing peloton, which was led by the blue kits of Etixx-QuickStep. At this point the peloton was not much more than 20 riders with most riders easing up due to the slick conditions, leaving the sprinters to fight for the stage win. The maglia rosa of Nibali sat in the second group on the road, surrounded by a few of his teammates.

On a short rise in the road, the white jersey of Jungels brought back the LottoNL-Jumbo rider and Colbrelli (Bardiani) put in a strong counterattack on the left side of the road. Disaster immediately stuck the Italian, as he clipped a spectator and went tumbling to the ground. Colbrelli would get up and finish the stage.

The final kilometers were disorganized with so few riders in the front group. Eugenio Alafaci (Trek-Segafredo) came to the front with 3km to go and restored a bit of order.

Sean de Bie (Lotto-Soudal) attacked in the final 1,500 meters and looked like he might hang on to win the stage as the riders entered the finishing straight. He was swept up in the final couple hundred meters and the sprinters set off for glory.

Nizzolo sprinted from the right to the left side as the road curved right, taking Modolo into the barriers; the Lampre-Merida rider shouted and threw a hand in the air in protest.

The Trek-Segafredo rider was ecstatic at the finish, as friends and family mobbed him. It wasn’t until 30 minutes later that he learned he’d been relegated. The Italian still had to climb onto the podium as winner of the maglia rossa, the points classification. Ardnt was awarded the stage win, with Trentin and Modolo completing the podium.

Nibali smiled and saluted the crowd as he crossed the finish line, winner of the Giro d’Italia for the second time. He will now focus on the Tour de France and the Olympic Games.

Valverde finished third and at 36 years old, the Spaniard still shows little sign of slowing down.

Absent from the podium was former race leader Steven Kruiswijk (LottoNL-Jumbo), who lost his race lead on Friday, after a high-speed crash into a snowbank on the Colle dell’Agnello, and further plummeted from the podium on Saturday, racing with a broken rib.

“I knew that Nibali was going to go strongly on the descent,” Kruijswijk said. “I wanted to follow him, but wasn’t able to look through the turn very well because of the snow. I made a mistake, slipped away and rode into that wall of snow. Before this Giro, I might have been happy with this fourth place, but you have to take the chances you get. I failed at doing that in this race and that’s a shame.”