Jay McCarthy Wins the Stage and Takes the Jersey 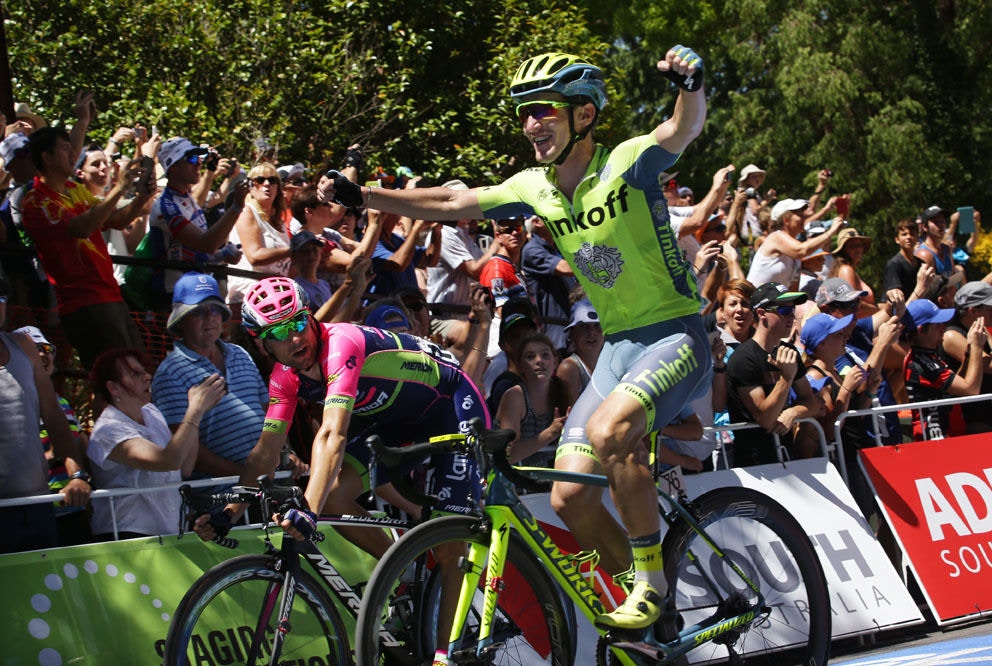 ADELAIDE, Australia (CT) – Jay McCarthy (Tinkoff) has dashed to the biggest win of his young career, winning the uphill sprint into Stirling on stage 2 of the Santos Tour Down Under.

The 23-year-old Australian made his move roughly 600ft from the line and was nearly overhauled by Diego Ulissi (Lampre-Merida), the winner of the corresponding stage in 2014. But McCarthy was able to keep pace with the Italian and managed to win the stage with a bike throw. Defending Tour Down Under champion Rohan Dennis (BMC) finished third.

A crash in the final 1500ft of the stage brought down several riders, not least overall GC favourite Simon Gerrans (Orica-GreenEdge). McCarthy was just ahead of the crash, however, and was unimpeded in his final sprint to victory.

“Coming to this race … I was in really good shape and even before the start I was hoping that I’d get my chance on this stage,” McCarthy said moments after crossing the line. “The team sat down before the race and said they would support me today and I’m glad I could deliver for them.”

McCarthy’s win continues the impressive trajectory he’s been on since joining the pro ranks in 2013. He was third on a stage at the 2014 Giro d’Italia, he finished third overall at the Tour of Turkey in 2015, and just last week he was fifth in the men’s road race at the Australian Road Nationals.

Today’s victory isn’t just McCarthy’s first WorldTour win, it also gives him the overall lead of the Tour Down Under going into tomorrow’s third of six stages. And the Queenslander has no plans of relinquishing the lead.

“I was hoping for a top five overall in this race this year. I knew I’d put some good training leading in and I felt like I had some good form,” McCarthy said. “Coming up with the victory today … I’m not done for the week. Hopefully I can keep working hard and go for my goal and hopefully even be on the top of the podium at the end of the week.” Stage 2 of the 2016 Tour Down Under began in the Adelaide suburb of Unley with 140 riders rolling out to begin the 82 mile race. The final destination would be Stirling, but not before five laps of a challenging circuit starting and finishing in the Adelaide Hills town.

They’d get roughly a minute ahead of the main field on the uphill start to the stage but that lead wouldn’t last long. Manuele Boaro punched out from the breakaway to take the 10 KOM points on offer after 8.6 miles, with Lane taking six points, De Gendt four and Offredo two.

Boaro was soon reabsorbed by the lead group and then, after 13 miles of racing, the early break was over as Orica-GreenEdge brought the race back together ahead of the first intermediate sprint.

Shortly after the intermediate sprint in Heathfield Australian fan favourite Adam Hansen (Lotto Soudal) broke clear of the peloton in a long-range solo move. The Queensland-born Czech resident built a lead that touched 2:30 at one point as he went on to take the second intermediate sprint after 31 miles. Back in the bunch Gerrans took another two bonus seconds (and three sprint points) while Ewan took another two sprint points and one bonus second.

The riders of Orica-GreenEdge continued to stamp their authority on the race after the second sprint point, continuing to ride the front of the peloton and keeping Hansen in check.

The lone leader’s advantage hovered at between one minute and 2:30 as the miles and laps of the finishing circuit ticked away. With 51 miles completed and 31 miles still to race, Hansen’s lead was hovering around the two minute mark and with 18.6 miles left, BMC had taken up the chase and the gap was down to 1:30.

At the start of the final lap, with little more than 13 miles to race, Hansen’s lead had been slashed to 40 seconds as Orica-GreenEdge took up the chase once again. It took just three more miles for Hansen to be reeled in as a sense of urgency swept through the peloton. Orica-GreenEdge, Astana and Tinkoff did much of the pacemaking on the final lap back towards Stirling, until Team Sky took over with 4 miles to go, most of their team on the front of the peloton, stringing out the race on the uphill drag to the line.

Overall leader Caleb Ewan (Orica-GreenEdge) succumbed to the frenetic pace with 3.6 miles left to race as Cannondale, Giant-Alpecin and Lampre-Merida all started to make their presence felt in the closing miles.

British national champion Peter Kennaugh (Sky) launched an impressive attack with a half mile to go, dragging Pim Ligthart (Lotto Soudal) with him. The pair would be caught a few hundred yards up the road just as a crash erupted in the bunch.

Vision of the incident seems to show Astana’s Lieuwe Westra swinging right in the bunch, touching wheels with Daryl Impey (Orica-GreenEdge) and bringing both riders down. The fall caused a chain reaction behind, bringing several others to the ground including Simon Gerrans.

“Coming into the finish we were exactly where we needed to be,” Gerrans said. “We were really well placed and Daryl was just about to go around the group and open up before there was a touch of wheels in front.

“All is not lost — we picked up a valuable five seconds on the road — but I’m obviously bitterly disappointed that we didn’t finish off the teamwork by winning the stage.”

Gerrans and Impey suffered only superficial injuries in the crash and both will be back on the startline tomorrow.

Ahead of the crash Tinkoff and Cannondale were leading the charge, giving Jay McCarthy the perfect platform to launch his sprint. He made his move with 600ft of the long, uphill drag still to go — almost too far out. But while Diego Ulissi was able to get on terms, it was the bike throw from McCarthy that won the day.

The 2016 Santos Tour Down Under continues tomorrow with a 86 mile stage from Glenelg to Campbelltown. The race features the steep, 1.5 mile Corkscrew Road climb less 3.7 mile from the finish, meaning the stage will almost certainly have an impact on the general classification.

Jay McCarthy will wear the leader’s ochre jersey after his victory today and hopes to be in the mix again on stage 3.

“Obviously I have to get delivered into the Corkscrew tomorrow with as fresh legs as possible so I can follow the likes of Richie [Porte], Rohan [Dennis] and Simon Gerrans over the top of it,” McCarthy said. “I hope I’ve got enough shape that I can do that.” Check out all the latest news and updates

Thinking of selling your bike? - Let BikeExchange do it for you