Find a store Blog
‹ back
Home
Blog
News
The Drama Continues on the First Day in the Alps.

The Drama Continues on the First Day in the Alps. 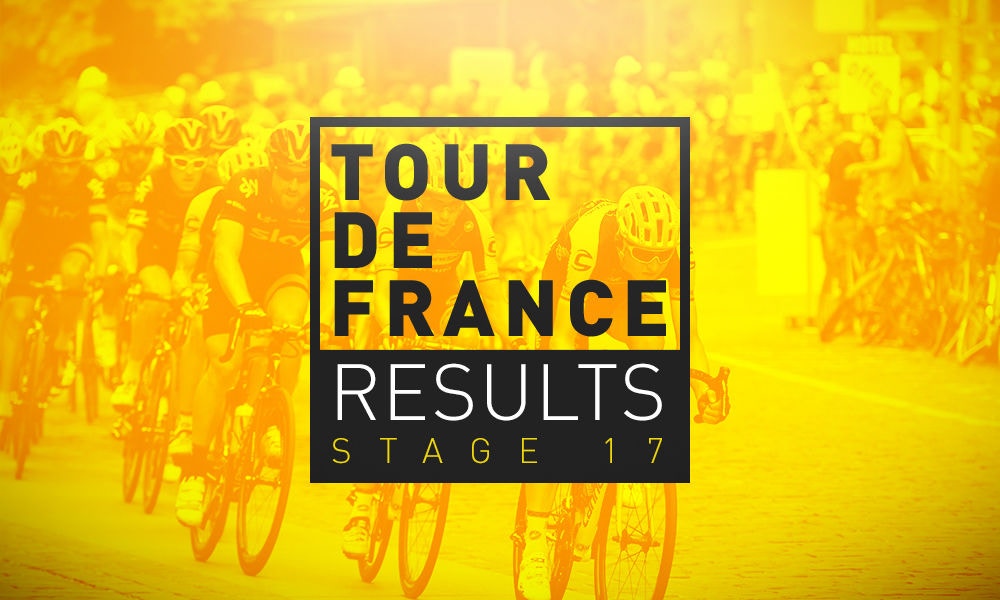 Stage 17 was an emotional day for so many reasons. Simon Geschke was brought to tears following his solo victory, and GC contender Tejay van Garderen was forced to abandon the race through sickness. He was one of five riders to abandon on the stage. The GC contenders duked it out once again, in what is fast becoming a very entertaining war of attrition.

Despite the riders being on the first of four incredibly difficult days in the alps, it was all action from the gun on Stage 17. There were countless breakaway attempts to begin the stage, but the peloton never allowed any of them to establish. It wasn't until the peloton had descended the first mountain of the day, the Col des Leques, that a breakaway was able to create a gap.

As we have seen in previous stages, it was a large group at the front of the race. Riders of note in the breakaway were Andrew Talansky of Cannondale - Garmin, Thibaut Pinot of FDJ, Rigoberto Uran of Etixx - Quick Step, Adam Yates of Orica-GreenEDGE, Rafal Majka of Tinkoff - Saxo, Richie Porte of Team Sky and the boss Peter Sagan, who spends his fourth straight day in the breakaway.

The biggest news at the start of the day was that BMC Racing Team's Tejay van Garderen had picked up a bug on the rest day and was severely ill. The solid pace to begin the stage put Tejay into difficulty and he was forced to ask for medical assistance on more than one occasion. The American was dropped by the peloton and fell behind by as much as two minutes. It looked as though Tejay's tour was over, but the GC contender was able to fight his way back into the peloton with 46 miles remaining in the stage.

Prior to the start of the stage Alberto Contador of Tinkoff Saxo announced he was feeling better than he did in 2013. The previous tour winner said, "I came to the tour for winning, not for making the top 5. There'll be opportunities. I intend to make the best of them". And with 46 miles remaining in the stage he stayed true to his word. He attacked with team mate Michael Rogers on the Col de la Colle Saint-Michel and quickly gapped the group. Surprisingly Movistar were the team to close Contador down, and in doing so obliterated almost every other rider. A group of 18 were all that remained of the peloton.

The move would prove to be the breaking point for van Garderen. Having just got back into the peloton, he was immediately blown of the back and looked in severe distress. His team car pulled along side him and made the heartbreaking decision to abandon the race.

At the front of the race, Serge Pauwels of MTN-Qhubeka p/b Samsung crested the Col de la Colle Saint-Michel in first place, adding to his KOM point tally.

It was then onto the intermediate sprint at Beauvezer. It looked as though Sagan and fellow breakaway compatriot John Degenkolb of Giant - Alpecin would fight it out but it was FDJ rider Benoit Vaugrenard who crossed first, almost by default, hitting a maximum speed of 22mph... that's right, 22mph. Degenkolb was leading into the sprint and Sagan was happy to let him take the points given his huge advantage, but Vaugrenard sensed an opportunity and beat them both. Immediately following the sprint Simon Geschke of Giant - Alpecin launched an attack that quickly gave him a one minute gap over the breakaway.

With 25 miles to go the race was scattered all over the place... one lone rider at the front, two chasers, a large breakaway of 25, a smaller breakaway of five and then the peloton. The first day in the alps was proving to be a thrilling one.

The second last climb of the day was the Col d'Allos. 9 miles in length at an average gradient of 5.5%. Geschke started the climb with a 1:40 advantage over the breakaway and a 10 minute advantage over the peloton. In the breakaway group behind him there were non stop attacks. Talansky, Pinot, Mathias Frank of IAM Cycling, Nicolas Roche of Team Sky, Daniel Teklehaimanot of MTN-Qhubeka p/b Samsung and Adam Yates all tried to separate themselves from the breakaway and ride across to Geschke. With 1.8 miles to go on the climb, Pinot showed what he was capable of, attacking the group with his busy pedaling style and opening up a gap. Geschke managed to maintain an advantage of a minute over Pinot at the top of the climb.

Onto the descent and Geschke was pushing the pace, trying to open up his advantage for the final climb. Pinot was giving chase, but his poor descending skills cost him. He was losing significant time to Geschke, and crashed on a tight left hand corner. Pinot was visibly shaken and his cautious approach following the crash allowed Talansky and Uran to catch up and blow past him.

Geschke started the climb up the Pra Loup with a 1:15 advantage over Talansky, who was eating into his advantage with every mileetre. Try as he might, Talansky simply ran out of road. He was able to half Geschke's advantage but the Giant - Alpecin rider dug deep and was able to hang on for the stage victory, just reward for his brave solo attack. Wins have been few and far between for Geschke, the German rider reduced to tears following the finish.

Back in the peloton the pressure was being applied by Astana Pro Team on the Col d'Allos, setting the race up for Nibali to attack the final descent. Once again, a selection had been made and only the eight strongest riders in the tour remained. As the GC group approached the top of the climb Nibali attacked. All of the GC contenders were able to answer. Chris Froome of Team Sky, Nairo Quintana and Alejandro of Movistar and Contador.

Nibali was quickly brought back which triggered an attack from Quintana. Froome was without team mates and under pressure, but he continued to counter and close everything down. Nibali and Valverde took some big shots at Froome on the descent but he was able to handle them all with poise. The biggest casualty on the descent was Contador, crashing out and having to wait to borrow a bike from a team mate.

At the bottom of the final climb up the Pra Loup there were four riders left in the GC group. Froome, Valverde, Quintana and Nibali. Two Movistar riders that were in the days earlier breakaway had slowed down and were setting the tempo on the front of the GC group for Valverde and Quintana.

The group remained together until the final two miles where Quintana attacked twice. His first attack was neutralized but with 1500 ft to go, his second attack managed to drop Nibali and team mate Valverde. Froome riding a flawless tour so far was wise to it, and jumped straight onto his wheel. The two crossed the finish line together, and will no doubt renew their battle tomorrow.