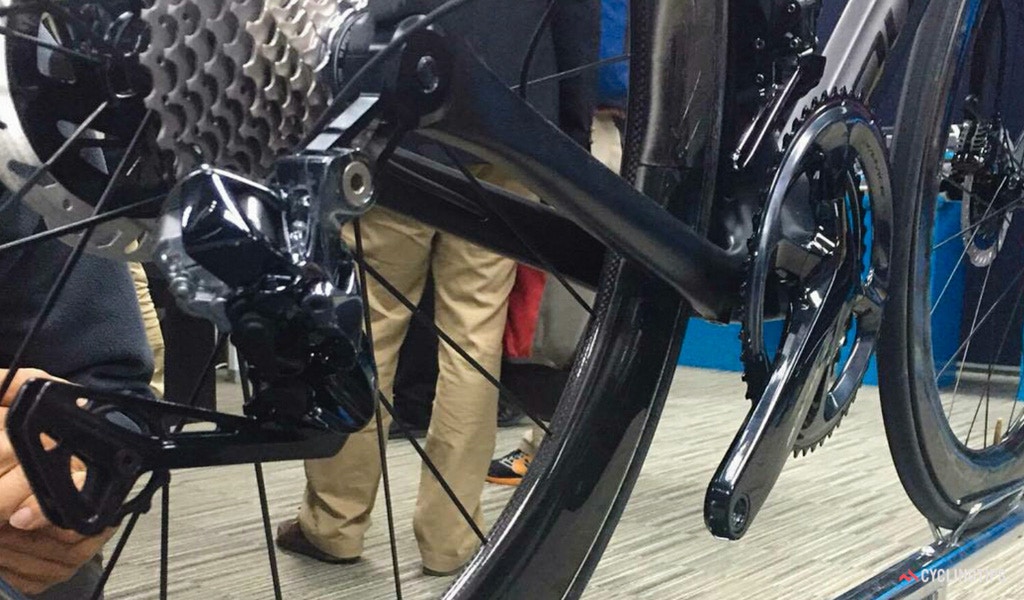 Shimano’s well-known three-year development cycle already had many expecting a revamped 2017 Dura-Ace groupset to be announced some time this year, but until now almost no one outside of Shimano and its business partners knew much about it. A pair of pictures secretly shot by someone at a private preview event at the Taipei Cycle Show has revealed a few key features, as well as a look at the group set’s aesthetic. In typical fashion for Shimano, it’s bound to be polarising.

The images that were posted online (and soon deleted) were unfortunately rather grainy but it’s still possible to extract quite a lot of information. Most important is the fact that the new electronic group — presumably to be called Dura-Ace Di2 R9170 — will stick with an 11-speed format and won’t add a twelfth rear sprocket as some have speculated. So at least for now, there shouldn’t be any compatibility issues.

Assuming the images reflect what we’ll actually see in production (and there’s no reason to believe otherwise), Shimano is moving even further down the path of sinister-looking aesthetics, covering nearly every visible surface in a menacing dark polished finish. This doesn’t exactly convey a sense of lightness, but in fairness to Shimano, it’s well in keeping with the direction road bikes and equipment have been heading in lately.

As before, the new Dura-Ace will be mostly crafted from aluminium, most notably in the new crankset with its broader hollow-forged arms and an outer chainring that’s reinforced more heavily than before. Bench tests have already shown the current Dura-Ace version to be one of the stiffest available and these new, bigger dimensions should only further that advantage. Meanwhile, the hollow outer chainring’s deeper box-section design should provide a boost in shift performance, too, particularly under load.

Sure to carry over is the same asymmetrical four-arm bolt circle pattern so 53/39-tooth, 52/36T, and 50/34T chainrings will all fit on the same spider.

The new Shimano Dura-Ace R9100/R9170 crankset bears much broader arms than before plus an outer chainring that looks incredibly well reinforced.

Given the recent introduction of SRAM’s wireless Red eTap electronic group, one might be surprised to see that Dura-Ace Di2 9170 is still wired. SRAM’s wireless Red eTap system is undoubtedly cool for a number of different reasons, but by its very nature, it also has an inherently greater potential for failure. The fact of the matter is that Shimano’s wired system works well with proven reliability and outstanding battery life, so there was probably little internal motivation to change it.

We don’t have any images of the shifters or front derailleur, but the rear derailleur is depicted pretty clearly. Making its first appearance on the road is the Direct Mount standard for attaching rear derailleurs that Shimano introduced in 2012, with presumably the same claimed benefits: a stiffer foundation for improved shifting performance and less chance of frame damage in a crash, and faster wheel changes since the rear-angled hanger leaves more room for the wheel and cassette to slide down and out.

It should be a straightforward process for bike companies that currently use bolt-on derailleur hangers to adapt to Direct Mount, but as on the mountain side, there will almost certainly be an additional link provided for use with traditional setups for backward compatibility.

The new Dura-Ace Di2 9170 rear derailleur itself bears some major changes, too, such as the longer pulley cage (or at least the option for a longer one) that should be able to handle a larger rear sprocket than the current version — possibly even as big as 30T. Further supporting the increased capacity is what appears to be a more sharply angled slant on the parallelogram.

Not much can be discerned about the cassette construction but at least for the size depicted, Shimano is continuing to use a mix of titanium and steel sprockets, likely on some type of aluminium and carbon composite spider.

Only the disc brake option is shown in the leaked images, but rim brakes are sure to be included. Clearly visible is a new disc rotor design, still with Ice Tech cooling fins and a Center Lock splined interface.

WHAT WE THINK WE KNOW

It’s safe to say that Dura-Ace Di2 R9170 will be lighter than 9070, although at this point there’s no saying by how much. And while we know the crankset is essentially just an oversized version of the current version, we don’t know if the spindle is similarly oversized or if Shimano is sticking with its tried-and-true 24mm Hollowtech II format; our money is on the latter.

What’s perhaps most intriguing is the covered port on the underside of the rear derailleur’s lower knuckle. The natural inclination would be to assume that this covers the adjustment screw for a clutched pulley cage, as is found on XTR Di2. Just as it does off-road, a clutch would greatly stabilise the chain on bumpy surfaces for quieter running and far better chain security — say, on the cobbles of Paris-Roubaix, for example. However, such a thing would not only also add weight but would increase shifting effort on the mechanical Dura-Ace analogue, both of which go directly against two of Shimano’s primary tenets.

That port is still likely covering an adjustment screw but we believe it’s just to tune the spring tension in the otherwise conventional pulley cage. Cobbles aside, road bikes generally aren’t subjected to the same amount of jostling as mountain bikes, so they don’t require quite the same level of chain control. Increasing the spring tension would still help settle down the chain to some degree, but with minimal weight and shift effort penalties.

Lastly, Shimano has yet to release a true Dura-Ace-level hydraulic disc option — but this may finally be the year. Adding further motivation is the UCI’s recent blessing of the technology for professional use. Fairly major weight savings are expected here thanks to more advanced materials.

A close inspection of the image reveals that the rotor’s centre carrier wears a deeper profile than it does now, and while it may be tempting to assume the company has moved to a composite spider, given its recent cassettes, aluminium is still the safer bet. Carbon composite’s more brittle nature likely wouldn’t sit well with Shimano’s notoriously conservative nature, and although the UCI’s decision to spec a 160mm-diameter rotor for pro racing means that Shimano’s hydraulic systems will now have more heat capacity than needed (the system was originally designed around smaller 140mm discs), the folks in Sakai City probably aren’t complaining about the additional safety factor.

So the carrier is likely once again aluminium but what about those deeper recesses in the spider arms? We’re going to go out on a limb here and say that Shimano is perhaps incorporating some aero shaping here, possibly using a lens-shaped cross-section as is commonly done with rear disc wheels. Time will tell.

WHAT WE’RE HOPING FOR

Here’s where things get really interesting. Everything above is based on what has now apparently been verified in photos, but what follows below centres around not only what we’ve heard, but also what we want.

Shimano has been working on a power meter for years, and rumour has it that it’s finally going to be released (or at least announced) this year. Tucked mostly inside the arms (which could help explain their massive size) could be twin strain gage arrays and all the electronics for true dual-sided, independent left/right power data, A high sampling rate could also provide detailed pedal stroke analysis similar to what Shimano already uses in its fitting system.

No major changes are anticipated for the shift/brake levers’ physical shape, but we’re hoping Shimano’s mountain-bike division has finally exerted some influence on the road side, namely with XTR Di2’s two-stage shift button actuation for faster multiple shifts, and the option for sequential shift programming that automatically determines front and rear derailleur operation based on the desired ratio.

A simplified wiring arrangement up front, with possibly a single split line connecting the levers to the junction box, also seems like a logical refinement. A tidier junction box would be nice, too — or at the very least some sort of attachment method that’s more sophisticated than a glorified rubber band around the stem.

Finally, the new Dura-Ace Di2 R9170 transmission may be wired, but we’re hopeful for wireless functionality — via both ANT+ and Bluetooth protocols — built directly into the system instead of the somewhat crude D-Fly add-on unit. This would allow for communication with third-party head units from Garmin, Wahoo, Magellan, and others, potentially revealing a wealth of interesting data such as the relationship between gearing choice/cadence and power, for example, not to mention a visual battery indicator similar to how mobile phones show remaining power on connected wireless accessories.

And yes, we hope the price doesn’t go up much, if at all.

WHAT IT MEANS FOR MECHANICAL DURA-ACE

Electronic and mechanical Dura-Ace groupsets have always shared roughly half of their components, and that obviously isn’t going to change any time soon, which means the cable version will get the same upsized crank, optional power meter, revamped rear derailleur geometry, Dura-Ace branded hydraulic discs, and whatever updates Shimano makes to its rim brake callipers, cassette, and chain.

Otherwise, we anticipate only minor changes to the front derailleur, perhaps doing away with the current version’s dual cable pull options, which can sometimes be tricky to set up but otherwise works well.

As for what the mechanical group will be officially called, our guess is Dura-Ace R9100.

As is usually the case with any leak of upcoming product, Shimano declined to comment, so we’ll have to wait and see exactly how much of all of this ends up coming to pass. Even if we’re only right about half of the things we’ve covered here, the new Dura-Ace sounds like a definite step up from the current version.