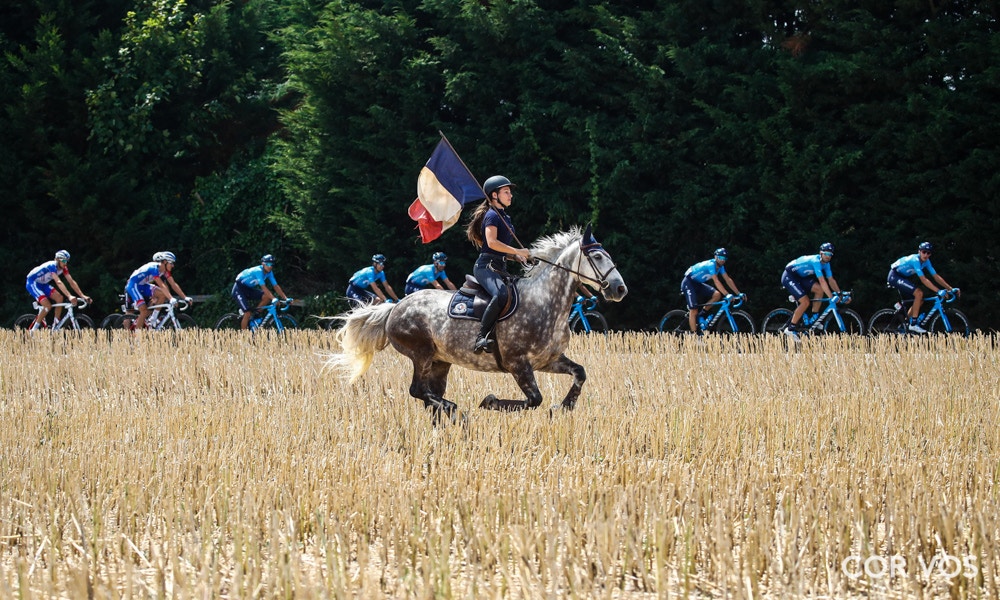 One day after winning the stage in Chartres, Dylan Groenewegen drew on his strong form and burgeoning confidence to clock up his third career victory in the Tour de France.

The LottoNL-Jumbo rider whipped past Andre Greipel (Lotto-Soudal) to grab the stage in Amiens Métropole. Fernando Gaviria (QuickStep Floors) was closed against the barriers by Greipel, used his head to try to push the German out, lost ground but came through to almost nab second. 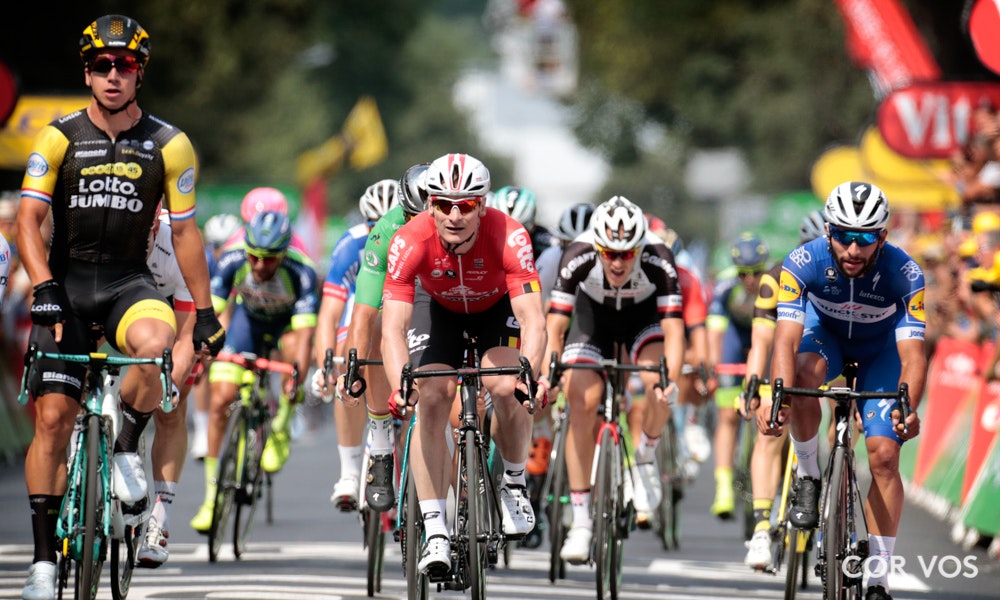 However both were relegated after the stage, with Peter Sagan (Bora-hansgrohe) and John Degenkolb (Trek-Segafredo) completing the revised podium. Alexander Kristoff (UAE Team Emirates), Arnaud Démare (Groupama-FDJ) and Thomas Boudat (Direct Energie) were the others in the top six.

“The last two days were very good,” said Groenewegen. “I am really proud of that. Tomorrow is a hard day, also for the general classification riders, but we will try.”

Race leader Greg Van Avermaet had another solid day, defending his yellow jersey. He boosted his advantage when he took third in the day’s bonus sprint. First and second went to the day’s two breakaway riders Marco Minnaard (Wanty-Groupe Gobert) and Fabien Grellier (Direct Energie); Van Avermaet was led out by his teammates and with his rivals not contesting he, he increased his lead by one second.

He is now seven seconds clear of Geraint Thomas (Team Sky), with Tejay Van Garderen (BMC Racing Team) nine seconds back. The rider who had been in fourth, Julian Alaphilippe (QuickStep Floors) was caught up in a crash and lost over a minute. So too stage six winner Dan Martin, who fell more heavily and sustained cuts to his elbow and back. 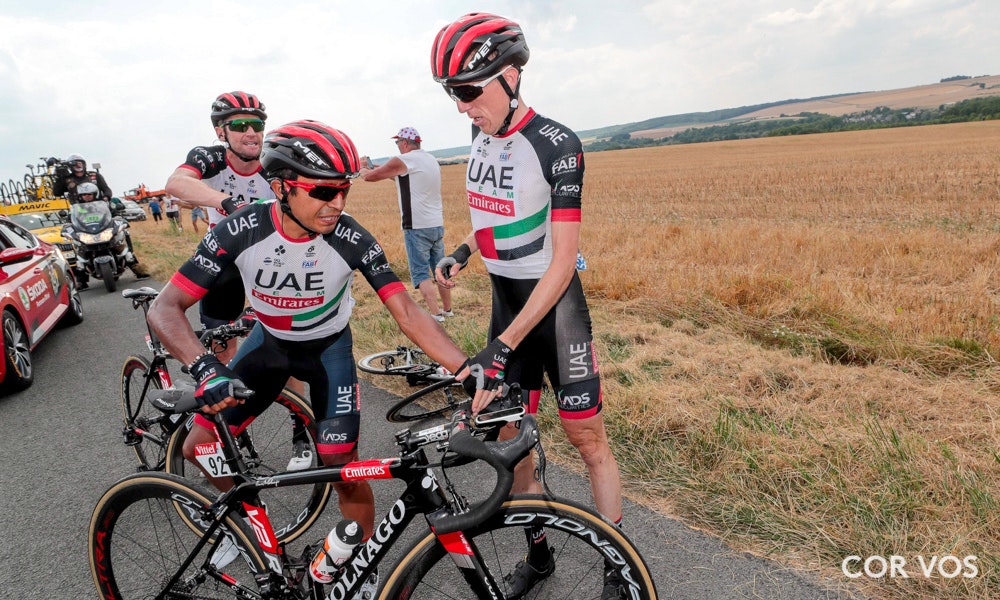 His UAE Team Emirates squad rode hard to try to bring him back and while they cut the deficit right down to under 40 seconds, the increase in pace by the sprinters’ teams inside the final three kilometers saw this grow to one minute 16 seconds by the line.

Martin was in a lot of pain after the stage and struggled to crawl up the steps of his team bus. The UAE Team Emirates doctor Antonio Angelucci gave an update after checks were carried out. “X-rays reported no fractures for Martin, who suffered in the crash a lumbar trauma and superficial wounds and grazes on the lumbar zone, on the left elbow and on the back.”

Martin crashed heavily in last year’s Tour, fracturing bones in his back. He went on to finish sixth overall, and is determined to press on this time. “I’ve felt better, obviously, but nothing is broken,” he said. “I’ve got to try and ride tomorrow now and get over those cobblestones, but it’s going to be sore. My back is a bit of a mess.

“The race seems incredibly nervous this year. I thought after yesterday that people would have realized that it hurts crashing, but obviously not. Hopefully I can survive through tomorrow’s stage now and we will see what the situation is after the rest day. That was the plan all along.”

Namesake Tony Martin also fell in the same crash and was more badly affected. His Katusha-Alpecin team said that he had a vertebral compression fracture in his spine, and that it was impossible for him to continue in the race.

The pileup saw Alaphilippe slip from fourth to 18th overall and Martin from 21st to 31st. They are one minute 26 seconds and two minutes 47 seconds off yellow. Like the other GC riders, they will hope to limit any losses on Sunday’s stage to Roubaix, and then to ride strongly in the mountains next week.

Stage eight of the Tour de France began in Dreux, ran to Amiens Métropole and covered 181 kilometers of undulating roads. There were just two official climbs, both fourth category. The first was the Côte de Pacy-sur-Eure, 35 kilometers after the start, and the second was the Côte de Feuquerolles (km. 71.5). The stage also featured an intermediate sprint at La Neuve Grange (km 86.5) and a time bonus sprint at Loeuilly (km 160.5). 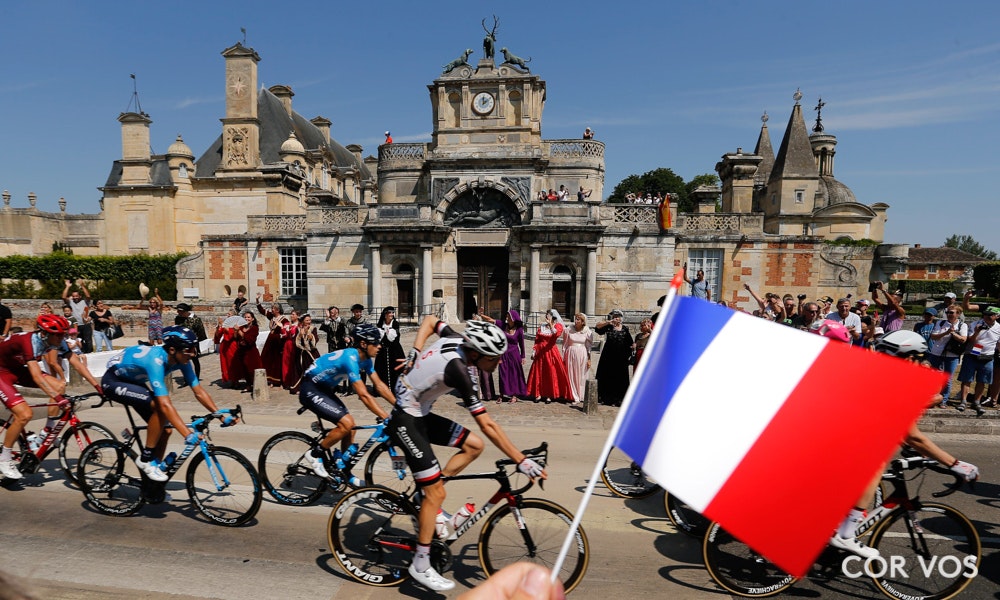 A bunch sprint was expected but, as ever, there was an early attack. Marcus Burghardt (Bora-hansgrohe) gave it a go but left out front and alone, he called off the move several kilometers later. Stefan Kung and Richie Porte (both BMC Racing Team) jumped away but they weren’t taking things too seriously and soon sat up.

After 23 kilometers Laurens ten Dam (Team Sunweb) leaped clear in a more committed fashion. He was joined by Fabien Grellier (Direct Energie) and Marco Minnaard (Wanty-Groupe Gobert), and the trio built a lead of two and a half minutes.

However after 40 kilometers of racing ten Dam sat up, leaving the other two out front. They continued on and built a lead of over six minutes. Back in the bunch, Dan Martin had a bike problem and changed machines. Soon afterwards he swooped back to the original bike which, presumably, had been fixed up.

Out front, Grellier was first to the top of the Côte de Feuquerolles (km. 71.5), and also picked up first at the later intermediate sprint. Arnaud Démare (Groupama-FDJ) was best of the bunch, beating Peter Sagan (Bora-hansgrohe) and Fernando Gaviria (QuickStep Floors).

With 75 kilometers to go, the two leaders were three minutes and 40 seconds back. The bunch continued to close and at the time bonus sprint, 20.5 kilometers from the line, it was down to just one minute 20 seconds. Minnaard took the three second bonus there while back in the bunch, race leader Greg Van Avermaet was lead out by his BMC Racing Team and took an undisputed third place. This gave him an extra second’s buffer in advance of Sunday’s cobblestone-littered stage to Roubaix.

Soon afterwards there was a huge crash in the bunch. Stage six winner Dan Martin was among the fallers, as were Julian Alaphilippe (QuickStep Floors) and Tony Martin (Katusha-Alpecin).

Martin’s UAE Team Emirates squad waited for him and rode hard to try to help him get back up, but these were still almost a minute back heading into the final eight kilometers. With five kilometers left, they were 40 seconds behind.

The break was caught inside the final ten kilometers, leaving the stage win up for grabs. With 3.4 kilometers left Philippe Gilbert (QuickStep Floors) got a small gap but was closed down. He kicked again and dug deep, but Team Dimension Data were chasing hard behind and keeping him close. Lotto-Soudal finally got him back with 1.6 kilometers to go.

The sprint played out and Peter Sagan went early. Andre Greipel (Lotto-Soudal) then launched, but was easily overtaken by Friday’s stage winner Dylan Groenewegen (LottoNL-Jumbo). Fernando Gaviria (QuickStep Floors) tangled with Greipel, using his head to try to push the German to the right and away from the barriers, but crossed the line in third.

Gaviria’s finishing speed after that delay suggested he might have fought for the stage win, but because of their clash, both he and Greipel were disqualified. Sagan and Degenkolb were moved up, while Groenewegen was left celebrating win number two of this year’s Tour and the third of his career.