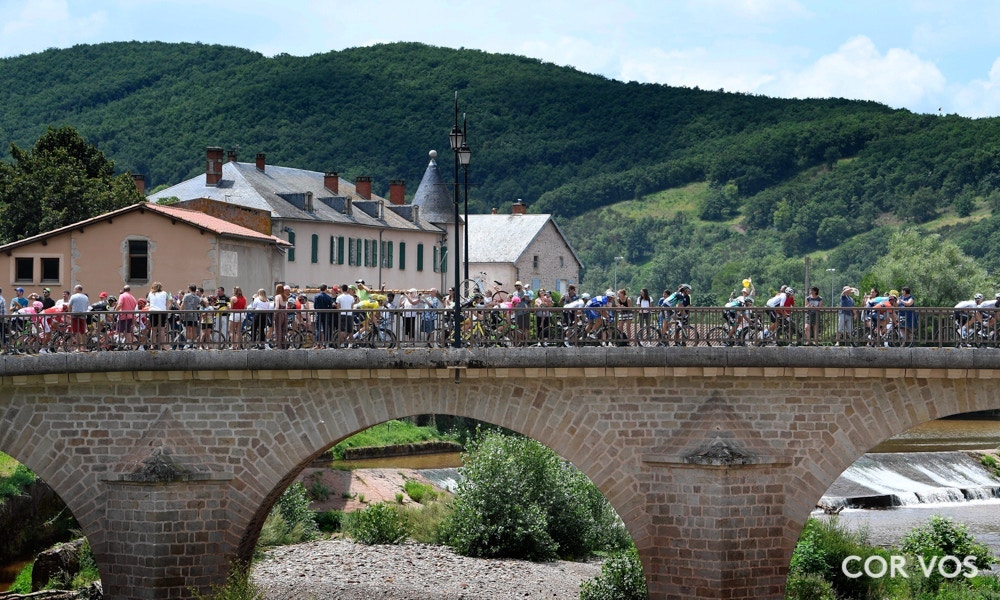 Danish rider Magnus Cort Nielsen grabbed stage victory in his debut Tour on Sunday, winning a three man sprint after being part of the day’s long-distance breakaway. He outsprinted Ion Izagirre (Bahrain-Merida) and Bauke Mollema (Trek-Segafredo) into Carcassone, proving too quick for his rivals in the gallop. The trio were part of a 29 man break which got away after 44 kilometers and which build a maximum lead of over ten minutes. There were various attacks from the group to whittle it down. A rider who started the race with GC hopes but disappointed, Rafal Majka (Bora-hansgrohe), attacked on the day’s final climb.

He went over the summit of the category one Pic de Noire with a solid lead over his chasers, but was caught by seven others with approximately 13 kilometers to go. Cort Nielsen, Izagirre and Mollema then got away with six kilometers left, sprinting it out and finishing in that order.

“It is amazing,” said Cort Nielsen. “It is something I have been dreaming off since I started riding my bike. It is my first year here at the Tour and I am so happy to take a victory. I have to thank my team for believing in me.”

He had teammate Valgren in the move and that gave them two cards to play. “It really was perfect,” Cort Nielsen continued. “My sports director had a lot of belief in me. They were the ones who came with this tactic many days ago. They told me then this was a stage for me and I should go out for it.”

The victory was the second consecutive triumph for the Astana team; it took Saturday’s stage 14 with Omar Fraile. “That really gave me the confidence that it is possible to win here at the Tour,” said Cort Nielsen. “I am very happy for him and also for me as well.” Mollema hoped to be a GC rider at this year’s race, having ridden strongly in the past. However things didn’t work out in that regard, meaning he was trying to salvage something on Sunday’s stage.

Being a non-sprinter against Cort Nielsen was a hurdle too far, though, and he had to accept third.

“He is really fast,” he said. “It was also a tactically final. First we had to get [Rafal] Majka back. We worked well together behind, so that went really well. Then everybody was looking at each other, it was a bit of a game to try to attack in the last ten kilometers. I got away with Izagirre and Nielsen. We knew that Nielsen is fast and it was really difficult to drop him. He deserved the win today.”

It was a day of little action for the general classification contenders. The summit of the final climb was 41.5 kilometers from the finish, making it very unlikely any riders could stay clear from there to the finish. Dan Martin (UAE Team Emirates) drew on his disappointment of puncturing in the finale of Saturday’s stage to Mende to attack on that climb, and build an advantage of a minute. However he was reeled in on the descent by race leader Geraint Thomas’ Sky team.

Michal Kwiatkowski (Team Sky) led in the bunch of GC favorites 13 minutes and 11 seconds behind Cort Nielsen, placing 27th. Thomas finished in this same group and maintains his one minute 39 second advantage over Chris Froome. Tom Dumoulin (Team Sunweb) is still one minute 50 second back, while the rest of the places in the top 13 also remain unchanged. “There was quite a bit of wind and it was quite stressful but the guys controlled it really well,” said Thomas. “It was the right break for us so we were happy with that.

“Then obviously Dan [Martin] went on the last climb of the day. There was 40 kilometers to go from the top with 20 kilometers of flat and a bit of wind, so it was a big ask. [Romain] Bardet tried on the descent but we were always in control. We just made sure we were there in the front.

“There was wind in the last 15km but it wasn’t enough to do anything, but there was a bit of stress anyway. We were always in the right place and it’s a good day to get done.”

Monday is the race’s second rest day, affording the riders a chance to get a breather prior to what will be a tough final week.

Stage 15 of the Tour de France was another hilly one, with three categorized climbs and other tough roads rearing up along the 181.5 kilometers from Millau to Carcassonne. Those climbs were the category three Côte de Luzencon (km 9), the category two Col de Sié (km 64.5) and then, after the intermediate sprint at Mazamet (km 121.5), the category one Pic de Noire (km 140). The latter was located 41.5 kilometers from the finish, somewhat neutralizing the effects of that climb and its possible effects on the general classification.

We’ve unfortunately seen this a lot from the Tour organizers in the past, with tough-looking mountain stages ending up being indecisive because the final peak is too far from the finish.

Early attackers were Thomas de Gendt (Lotto-Soudal) and Tejay van Garderen (BMC Racing Team), plus a solo move by Adam Yates (Mitchelton-Scott). These moves plus a subsequent attack by Warren Barguil (Fortuneo-Samsic) were brought back. Julian Alaphilippe boosted his King of the Mountains lead with a prime win atop the first climb, putting him 22 points ahead of Barguil in that competition.

Yates and Barguil clipped away again on the categorized roads after the summit and were joined by Gregor Muhlberger (Bora-hansgrohe). They had a solid lead after 22 kilometers, but were reeled in approximately 16 kilometers later. The peloton was content to let the move go and it quickly gained three and a half minutes. Once onto the Col de Sié, Calmejane tried to reduce the numbers by attacking and opened a lead of over a minute. He took top points at the summit but was hauled back afterwards. The gap to the peloton was over six and a half minutes at that point.

More attacks followed in the front group, likely because the size of the break made for less cooperation. Terpstra was active, but couldn’t get away. Skujins, Van Avermaet and Grellier got clear but Sagan and others hauled them back. The peloton was over nine minutes back at that point, 76 kilometres from the finish, and soon drifted to over ten minutes back.

Grellier tried again and was joined by Bernard. Bernard took the intermediate sprint, with Sagan netting third out of the chasing group.

The two leaders then raced onto the Pic de Nore, the day’s sole category one climb, and built a lead of over a minute. Behind, Izagirre and Pozzovivo were active in the chase, while Sagan cracked and slipped backwards.

Majka was determined to try to get up to the leaders and attacked on the climb. Further back, Dan Martin (UAE Team Emirates) attacked the general classification riders, seeking to get time back after his puncture late on Saturday’s stage, and to try to improve on his tenth place overall.

Majka was climbing well and caught and passed Bernard, opening a 40 second lead on his chasers. Further back, Martin was the same margin ahead of the yellow jersey bunch, and increased his advantage to one minute before going over the summit. However Team Sky were chasing hard and were reducing the gap.

Majka dropped down the descent trying to stay clear but Mollema, Cort Nielsen, Skujins, Calmejane, Izagirre, Pozzovivo and Valgren were closing in on him. He was caught after the descent, with approximately 13 kilometers left. Martin was also hauled back, the Team Sky riders chasing down a move by Romain Bardet (Ag2r La Mondiale) and then continuing on to reel the Irishman in .

The eight leaders started jumping around inside the final ten kilometers. With six kilometers left Cort Nielsen, Mollema and Izagirre got away from the others and built a decisive 30 second advantage. Mollema and Cort Nielsen tried to work out how to get clear of Cort Nielsen, fearful of his strong sprint, but were unable to stop him taking the gallop to the line. Izagirre finished second, with Mollema third, two seconds back.

Valgren soloed in for fourth while Skujins and Pozzovivo were fifth and sixth. As for the GC riders, they all finished together, with the long distance from the summit to the finish meaning there was no change at all in the overall standings. Next up the rest day, then the final push to Paris.

“I’m just taking each day as it comes,” said Thomas, who is a week away from what could be the biggest win of his career. “I’m looking forward to the rest day and then we’ve got a big block in the Pyrenees.”