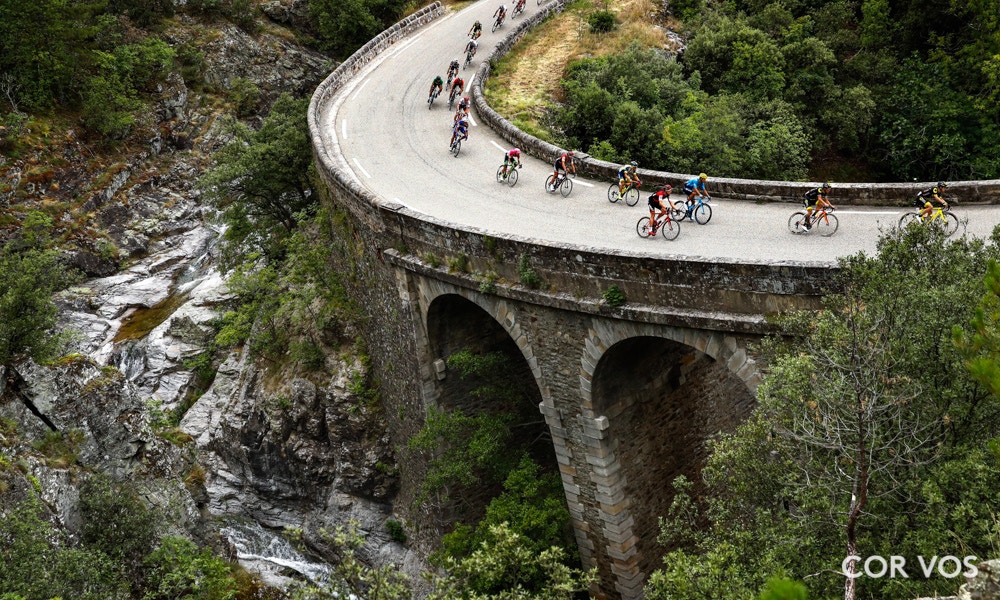 Launching his big move on the day’s short, steep final climb, Omar Fraile (Astana) overhauled lone leader Jasper Stuyven (Trek-Segafredo) and sped to his first Tour de France stage win on Saturday. The Spaniard went over the summit several seconds clear of Stuyven and King of the Mountains Julian Alaphilippe (QuickStep Floors), then plummeted down to the finish and victory in Mende. 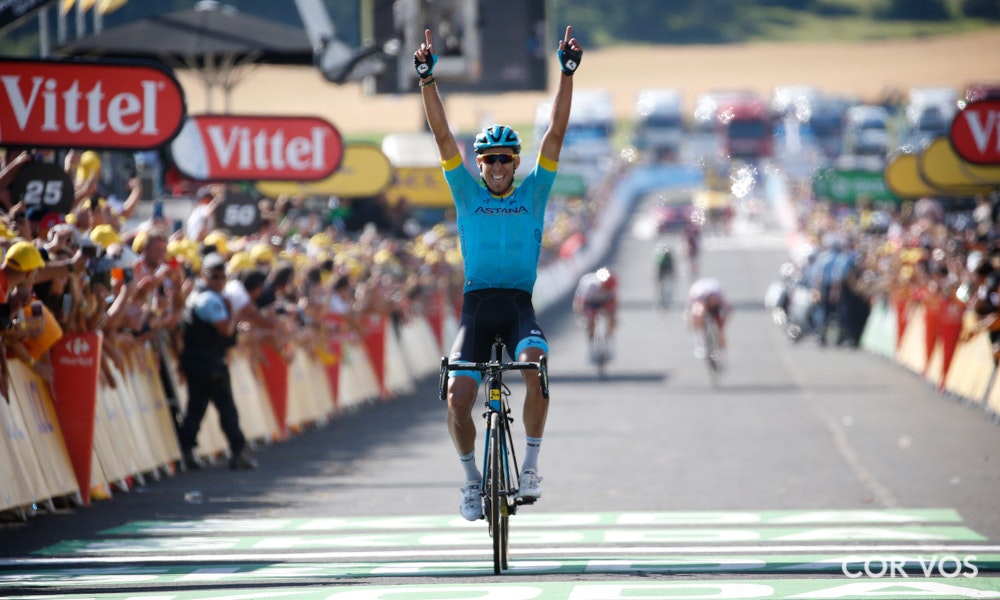 “It is amazing, absolutely incredible,” said 28 year old Fraile “I can’t believe it! For me it was a dream to win a stage at the Tour, and now this dream comes true!

“Last year I won a stage at the Giro and now I repeat my success at the Tour. Already yesterday I felt quite good and today I was motivated to go in a breakaway to try to fight for the stage. I knew it would be difficult, especially because the group was really big. On the final climb there was a head wind, but I found a moment to attack and just did my best to come in front and to hold my advantage until the finish line. This victory is so important for me, but also for my family and my friends.”

Fraile and the rest of the team started out with a special motivation, aiming to commemorate the memory of Kazakh figure skater Denis Ten. Ten was a 25-year-old Olympic bronze medalist who was stabbed to death on Thursday.

“We were wearing black ribbons today to honor Denis Ten,” he said. “It is a very sad story for the whole world of sport and I dedicate this victory to all the people of Kazakhstan.”

The GC riders were a long way behind Fraile, their teams realizing it was a day for the break and switching off midway through the stage. However the race was very much back on when the approached the last climb, with Primoz Roglic (LottoNL-Jumbo) attacked on the early slopes and getting a gap he held all the way over the top and down to the finish. 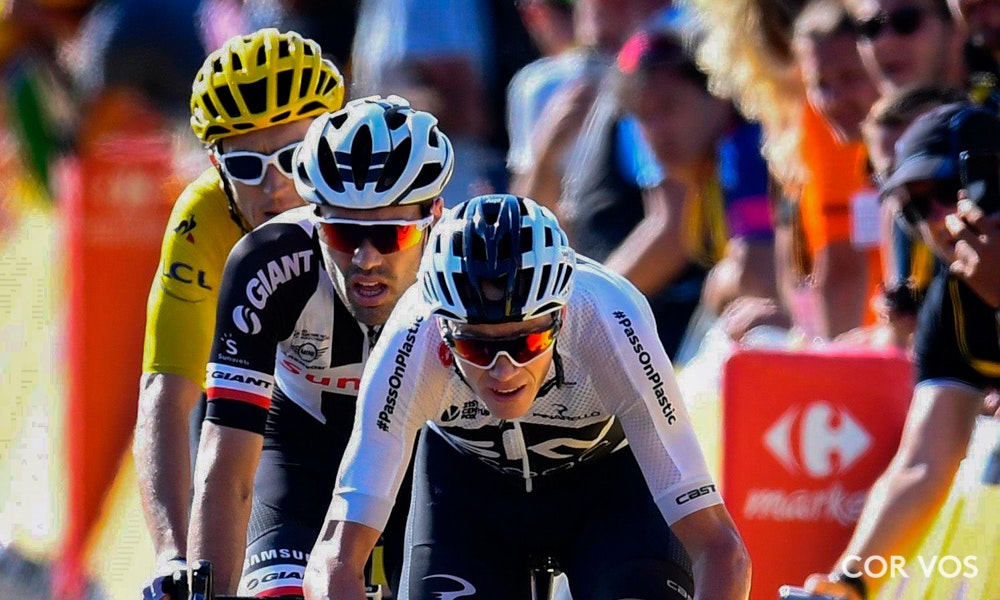 Race leader Geraint Thomas, Chris Froome (both Team Sky) and Tom Dumoulin (Team Sunweb), the first three overall, were strongest of the rest and got a gap on the climb. They raced into the finish eight seconds behind Roglic, and ten seconds ahead of Nairo Quintana (Movistar). Steven Kruijswijk (LottoNL-Jumbo), Egan Bernal (Team Sky) and Romain Bardet (Ag2r La Mondiale) were four seconds behind him, with Ilnur Zakarin (Katusha-Alpecin) a further ten seconds back.

“We tried to attack each other a bit but we were all equally strong,” said Dumoulin, referring to Thomas and Froome. “We were pretty evenly matched, just like when we were in the Alps. We’ll see where that goes in the next week. First we look to the Pyrenees, then to the time trial.

“I attacked first then Thomas was on my wheel, then Froome closed the gap and attacked. Then Thomas closed the gap to Froome. I stayed on the wheel – they also don’t want other guys to get ahead.”

Thomas said that he and Team Sky were happy for the break to stay away. “Obviously we knew it would split up at the finish, and with only two mountaintop (finishes) left, that the guys would try,” he said. “We’re satisfied. Obviously Roglic got a bit of time back but it wasn’t too much of a stress for us. It’s nice to gain a bit of time on everyone else.

“The main thing was just staying with Dumoulin and just trying not to get too carried away and staying with the main guys. It was a good day.”

There was little change to the overall positions, save for Jakob Fuglsang (Astana) leapfrogging Dan Martin (UAE Team Emirates) for ninth due to a puncture suffered by the Irishman with about five kilometers to go. However there were changes in the GC times; Thomas, Froome and Dumoulin remain at the same gaps, namely one minute 39 and one minute 50 apart, but behind them things have changed. 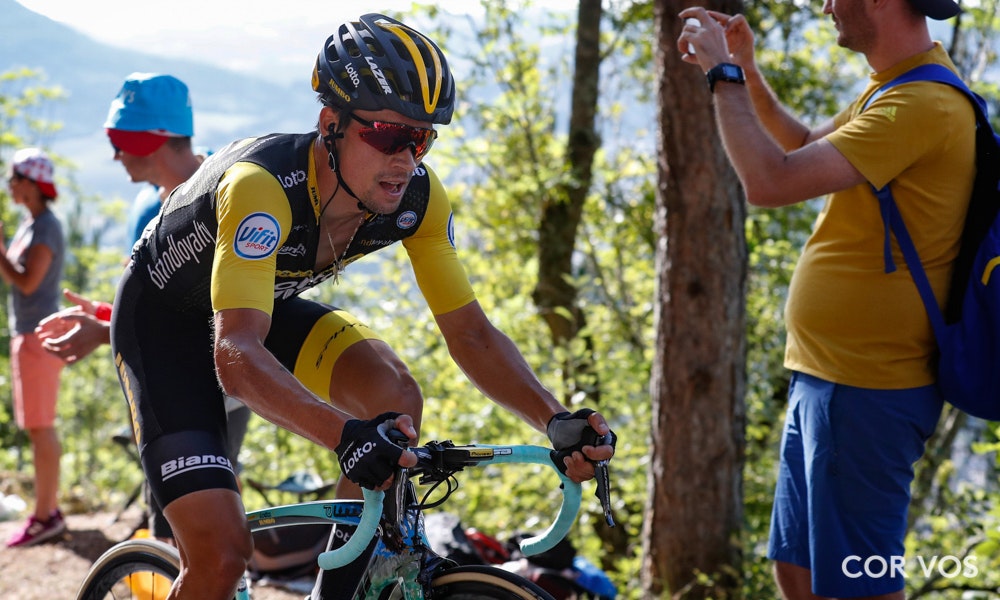 Roglic reduced his deficit by eight seconds and is now two minutes 38 seconds back, while Bardet’s deficit goes from three minutes seven seconds to three minutes 21. Landa is now at three minutes 42 seconds, while Kruijswijk [at 3’57], Quintana [at 4’23], Fuglsang [at 6’14] and Martin [at 6’54] also drift further away from the podium.

Team Sky retains first and second overall for now, but Thomas knows that there is a lot of racing ahead. “A lot can still happen,” he said. “There are three big days in the Pyrenees still to come but obviously we’re in a good position right now.”

After a relatively flat stage 13 which threw a bone to the bunch sprinters, stage 14 of the Tour de France returned to the theme of climbing. The Pyrenees still lie ahead, but the peloton was travelling through the Massif Central and four categorized climbs lurked along the route.

The first of those came 81 kilometers after the start in Saint-Paul-Trois-Châteaux, and was the category four Côte du Grand Châtaignier. This was followed by the day’s intermediate sprint at Bessèges (km 90), then the category two Col de la Croix the Berthel (km 129), the category three Col du Pont sans Eau (km 142) and the day’s final climb, the short, steep Côte de la Croix Neuve. This topped out at kilometer 186.5, just 1.5 kilometers from the finish line in the Mende airfield.

That final ascent was just three kilometers in length but averaged 10.2 % in gradient. It was certain to fragment the peloton and to provide a platform for the general classification riders to attack the race leader Geraint Thomas (Team Sky).

Another Thomas – Thomas De Gendt – was the day’s first attacker, going as soon as the flag dropped. This aggression by the Lotto-Soudal rider and others plus crosswinds led to the bunch splitting into four parts, with Mikel Landa (Movistar) and Warren Barguil (Fortuneo-Samsic) among those stranded in the last group. However after approximately 13 kilometers of racing, the pace settled down and a regrouping happened. At the same time, King of the Mountains leader Julian Alaphilippe (QuickStep Floors), De Gendt and five others got clear in a breakaway move.

Also present were Andrey Amador (Movistar), Anthony Perez (Cofidis), Omar Fraile (Astana) and Direct Energie duo Lilian Calmejane and Jérôme Cousin. They were chased by a group of 25, including points jersey leader Peter Sagan (Bora-hansgrohe), and after 30 kilometers of racing these got across. 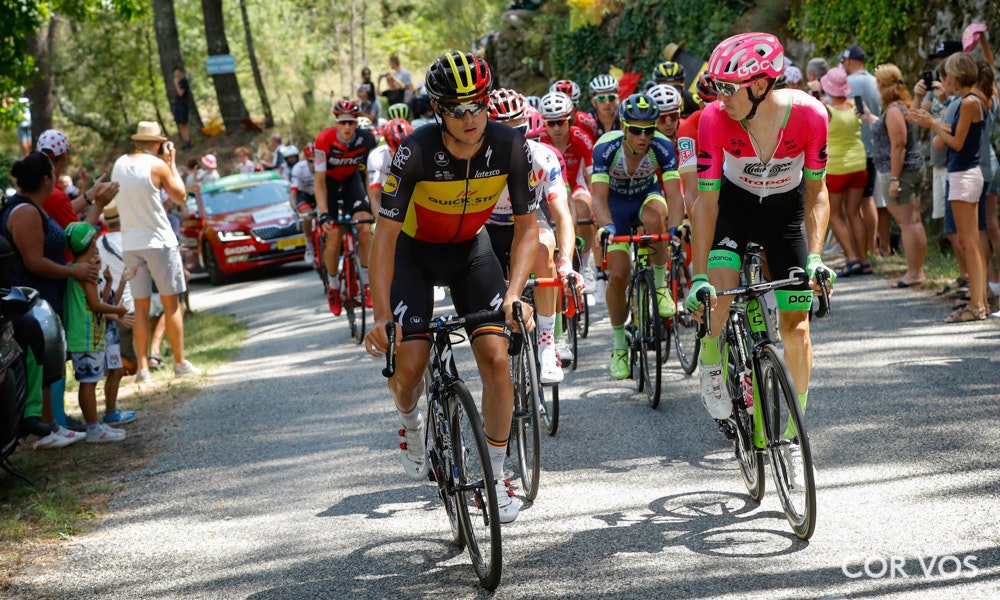 These had five minutes over the bunch after 48 kilometers of racing, and five minutes 50 after 65 kilometers. Alaphilippe took the KOM prime atop the category four Côte du Grand Châtaignier (km 81) and nine kilometers later Sagan bolstered his green jersey lead with first place in the intermediate sprint. The gap there was seven minutes and 10 seconds, and it increased to nine minutes 10 seconds with 70 kilometers left.

Eight kilometers after that Izagirre attacked on the category two Col de la Croix the Berthel, crossing the summit 20 seconds ahead of Slagter, Alaphilippe and Gilbert. The peloton was a huge 11 minutes 10 seconds back then.

Izagirre was riding well and was clear with Stuyven and Slagter with 55 kilometers remaining. Stuyven went over the top of the category three Col du Pont sans Eau (km 142) first, followed by Izagirre and Slagter. Behind, Cousin, Laporte, Gogl, Hepburn, Chavanel, Koren and Vermote all got into difficulty and slipped backwards.

A SOLO MOVE, THEN THE STEEP FINAL CLIMB

The bunch appeared to have decided it was a day for the break to dispute the stage and had switched off. With 40 kilometers left the three leaders were one minute 15 ahead of the next chasers, while the bunch was a huge 15 minutes adrift and out of the picture.

The chasers were Martínez and Rolland, Geschke, Impey, Caruso, Alaphilippe, Gilbert, Fraile, De Gendt, Calmejane, Edet and Degand. De Gendt wasn’t happy with the chase and jumped away with 35 kilometers to go, but was caught. 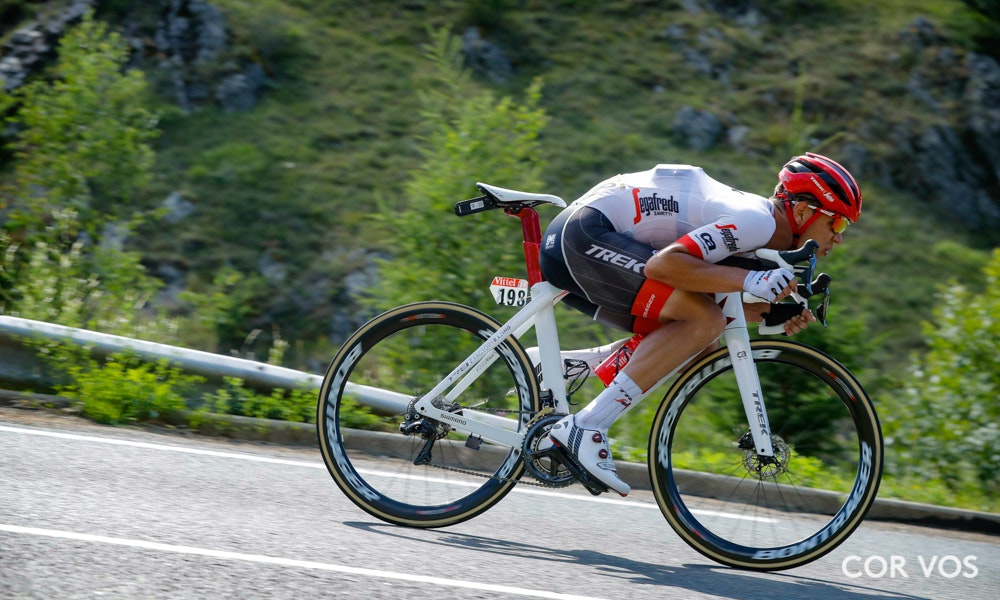 Stuyven was feeling good and dropped Izagirre and Slagter. He committed fully to the solo move, cognizant that he needed a good buffer before the tough final climb. Izagirre and Slagter were joined by Calmejane and De Gendt, but the other riders then got up to them. These were one minute 45 seconds back with 13 kilometers left, and one minute 30 seconds at the bottom of the climb with some four kilometers left.

Fraile jumped away in a bid to get across to Stuyven. With two and a half kilometers left he was 29 seconds back and fighting his bike to eke out as much speed as possible. All eyes were on Alaphilippe, who was waiting for the perfect moment, and who launched and immediately got a gap.

Fraile got across to Suyven, who was immediately dropped. Alaphilippe was trying to get up to Stuyven before the top and did so, but Fraile was still clear and sped down the descent to the finish. He sprinted in for a well-deserved victory, while Stuyven did all the work coming in the road but was jumped by Alaphilippe for second. Peter Sagan took a superb and unexpected fourth, with Caruso fifth and Geschke sixth.

Behind, the peloton raced towards the climb, with the GC riders’ teams trying to put them in the best possible position before the climb. Primoz Roglic (LottoNL-Jumbo) attacked early but was chased by Team Sky, with race leader Geraint Thomas sitting second wheel. He was followed by Nairo Quintana (Movistar), with a slight gap back to Chris Froome (Team Sky) and Steven Kruijswijk (LottoNL-Jumbo), and another gap to Tom Dumoulin (Team Sunweb).

These riders came together with 2.1 kilometers to go, then Dumoulin attacked and tried to bridge to Roglic. Thomas jumped on his wheel with Quintana and Froome behind them. The other GC riders were dropped.

Froome then attacked but Thomas covered him, then went through. Dumoulin was a couple of bike lengths back going over the top but joined them, with the three dropping down and holding a gap over the others. Roglic was still out front, though, and raced on to the finish line, 18 minutes 1 second behind Fraile but eight seconds ahead of Froome, Dumoulin and Thomas. Quintana trailed in a further ten seconds back, while Kruijswijk, Egan Bernal (Team Sky) and Romain Bardet (Ag2r La Mondiale) were four seconds behind him.

The gaps weren’t big, but the psychological effect was considerable. There’s still over a week of racing to go, but a clear pattern seems to be emerging about those who seem most in form.