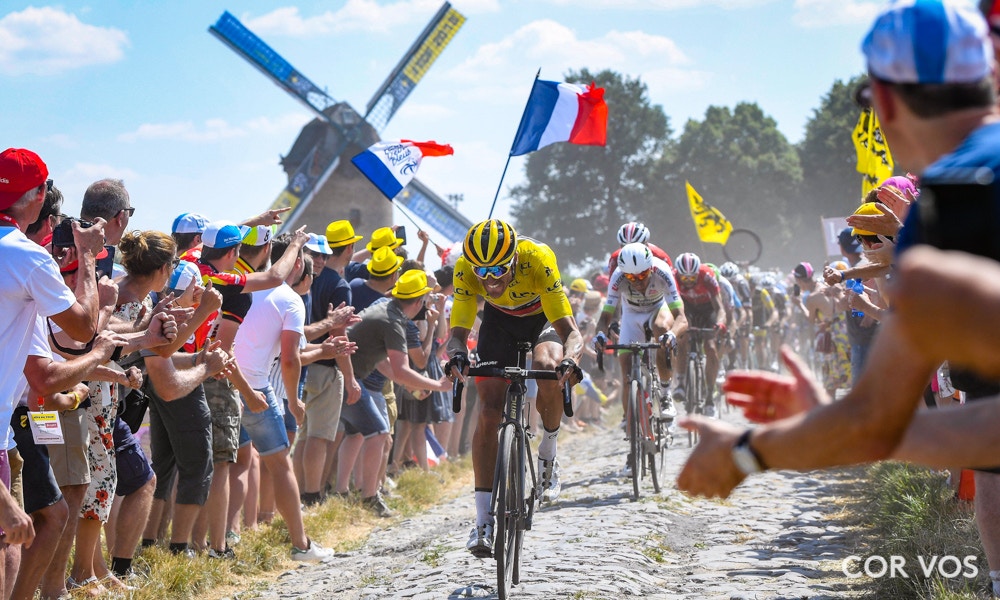 Three years after he won Paris-Roubaix, two after being injured in a big pre-season crash, John Degenkolb finally completed his return to the very top of the sport when he won stage nine of the Tour de France. The Trek-Segafredo rider ended a long and frustrating period in his career by being one of the strongest over the cobbles heading to Roubaix, then outsprinting race leader Greg Van Avermaet (BMC Racing Team) and Yves Lampaert (QuickStep Floors) to the line. 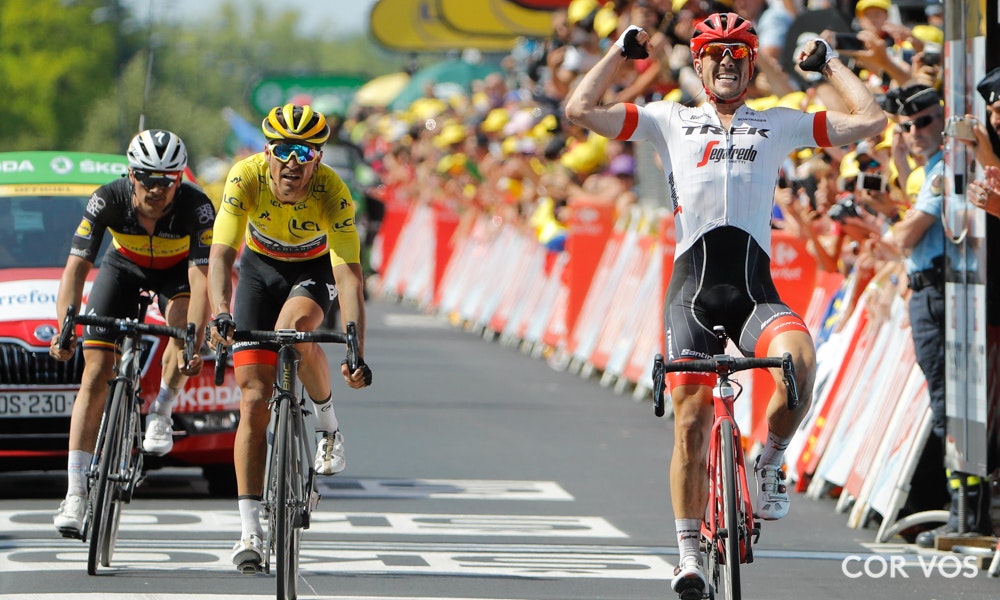 But worse off of the big names was Richie Porte (BMC Racing Team). The Australian fell inside the first ten kilometers of the stage and suffered a shoulder injury which put him out of the race. 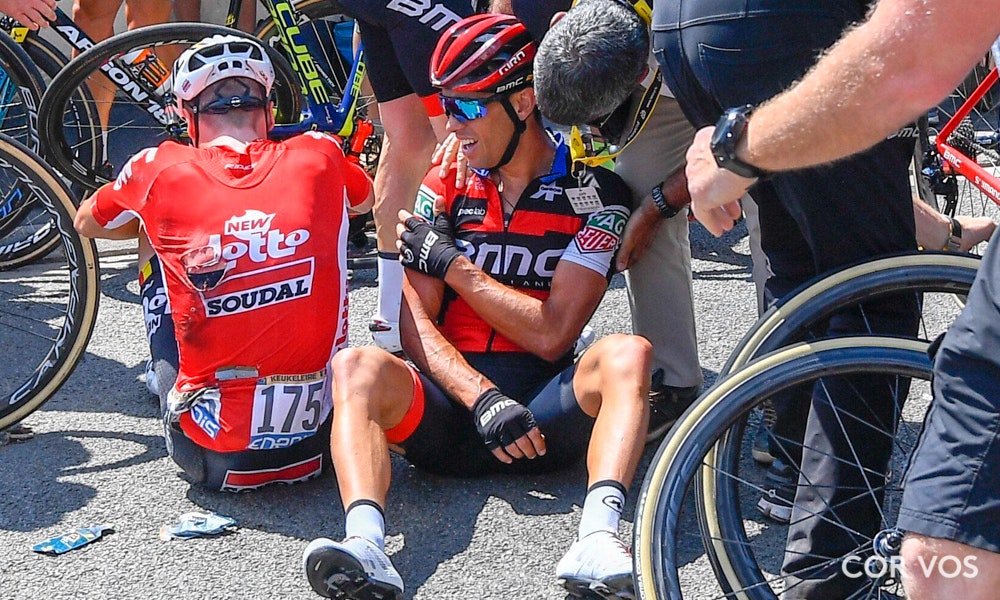 Degenkolb has been through his own battles, being hit by a car near Calpe almost two and a half years ago. He and other teammates suffered a range of injuries, with the German almost losing a finger in the crash. He’s had a long road back since then, and feels like he has finally turned the page.

“In relation to what happened in the last two years, I think this is pretty unbelievable,” said an elated Degenkolb. “So many people said ‘he is done, he is over, he will never come back.’ I am so happy to show these guys who didn’t believe me any more that I am still there, that I am still alive.

“I think that is also what I took out of this accident. That you have to be happy that after such a horrible crash, you are still alive, you are still there. I was fighting my way back and am so proud of that.

Asked what he was thinking in the last ten kilometers, he referred to a tunnel-vision approach. “I was not thinking anything. I was just focusing on the race, trying to stay calm. I felt really good, and then you don’t need to think.”

Aside from the stage win, the day was also all about the GC battle. Dan Martin hit the deck hard on stage eight and lost time. That prompted concerns that he could yield more minutes over the cobbles, but he was actually best of the GC riders on Sunday thanks to a one second time bonus he picked up.

“I just stayed relaxed,” he said, when asked what was the key to his performance. “I knew that from the recon that even if you ride easy on this cobblestones, at the end you are totally cooked. Directly from the start it was crazy. I was at the front and you use so much energy, so I thought ‘what am I doing?’ This is going to get hard enough as it is.

“So I sat back a bit, made sure I ate and drank lots before the first section. That’s why you might have seen me at the back a lot. I was just composing myself. Because I knew that the guys were backing me. They believed me, they stayed with me, they said, ‘we will save you whatever happens and we will close the gaps.’ In the end we just picked our way through all the crashes, all the mechanicals. The bike was faultless. It was one amazing day.”

Van Avermaet boosted his overall lead thanks to his second place behind Degenkolb. He’s now 43 seconds ahead of Geraint Thomas (Team Sky) and 44 up on Gilbert. However although he will hold yellow through Monday’s first rest day, he was somewhat disappointed. That was both due to missing out on the stage win, and also because of the withdrawal of team leader Richie Porte.

“This was not the best day for us. Richie was our main guy for GC,” he said. “That is the way racing goes sometimes. We lost him already last year, so it is two years in a row for him. Okay, the crash is not as hard as last year, I think. So he will recover faster. But after this, you just have to switch [focus]. I just tried to do my race. It is a bike race, it goes on. I will try to do the best for all the team.”

His success in Roubaix came at the end of a much longer race, and one with far more cobbles. He indicated he would have preferred to have something tougher than the 156.5 kilometers he experienced on Sunday.

“[Degenkolb] won, so he was stronger than me. I had the feeling that maybe the race was not long enough for me. It is a big disappointment to me to not win. I was really aiming for a yellow win. I wanted to do this and it didn’t happen. But that is how it goes. Tomorrow is another day.”

Stage nine of the Tour de France was a big one: a rendezvous with the jarring cobblestones of northern France. The riders would battle it out over 156 kilometers from Arras Citadelle to Roubaix, with the Classics specialists dreaming of a prestigious stage win, and the GC riders hoping to make it through unscathed. For the strongest and luckiest of the overall contenders, there was the possibility of time gains, too, but staying out of trouble was the biggest priority.

In all there were 15 sectors, beginning after 47.5 kilometers of racing. The first was a 1.6 kilometer stretch from Escaudoeuvres to Thun, the longest was a 2.7 kilometer sector from Auchy to Bersee, and the last was the 1.4 kilometers between Willems to Hem. Rather than mud, the difficulty came from a thick coating of dust on the stones, which made things equally slippery.

Back in the bunch, there was a big crash inside the first ten kilometers. GC favorite Richie Porte (BMC Racing Team) fell heavily and was forced to retire from the race with a damaged shoulder; also out was JJ Rojas (Movistar), while Andre Greipel (Lotto-Soudal) crashed but was able to continue.

The five chasers soon joined the five out front, producing a ten-man break. Then with 47.5 kilometers remaining Fraile led the break onto the first cobbles. Tolhoek punctured out of the group and gradually slid back towards the peloton, leaving nine out front. Meanwhile back in the bunch, Romain Bardet (Ag2r La Mondiale) punctured and lost a minute. He changed his bike and joined up with teammates, successfully chasing back on.

Following the second sector of cobbles, the break’s advantage was up to slightly over three and a half minutes. De Gendt was first over the line at the intermediate sprint, with Cousin, Edet and the other riders from the break following. Peter Sagan (Bora-hansgrohe) was best out of the bunch, netting 11th. Soon afterwards Bardet had more bike issues, needing another replacement bike. But, once again, he was able to get back to the peloton.

With 85 kilometers to go the break had approximately three and a half minutes. An example of the highs and lows of the sport occurred when the stage seven and eight winner Dylan Groenewegen (LottoNL-Jumbo) crashed out of the bunch, being delayed a long time while waiting for a bike. 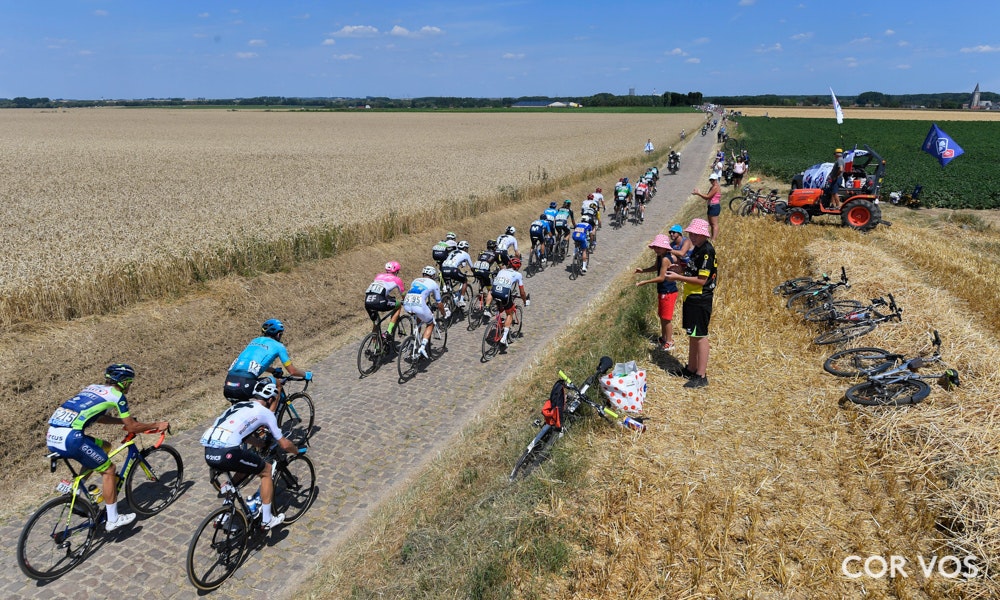 Also on the deck was Egan Bernal (Team Sky), who fell on the approach to sector 12. Soon afterwards a crash in the bunch took Jakob Fuglsang (Astana) down, but he wasn’t badly hurt. Team Sky then hammered the pace and caused a split, with Vincenzo Nibali (Bahrain-Merida), Adam Yates (Mitchelton-Scott) and Rigoberto Uran (EF Education First) among those left 20 seconds behind. However they got back up with 60 kilometers left, with Fuglsang also regaining contact.

The break reached sector ten two minutes ahead of the bunch. Tejay Van Garderen (BMC Racing Team) had been distanced earlier and just before he got back to the peloton, he hit the deck. He got back up but had a puncture soon afterwards.

With 49 kilometers left the break was just under one and half minutes ahead. Yellow jersey Greg Van Avermaet (BMC Racing Team) was feeling good and put in an attack, splintering the peloton. Meanwhile Bardet had further mechanical issues and was once again left chasing with his team.

Fuglsang had regained energy after his crash and chased back on, then ramped up the pace on the next stretch of cobbles. Out front, van Rensberg and Gaudin jumped clear of the peloton, conscious that the gap over the bunch was down to just over 30 seconds with approximately 37 kilometers left.

BATTLE FOR STAGE HONORS RAMPS UP

With Roubaix on the horizon, there was a clear sense that the day’s final battle was unfolding. Kwiatkowski was one of those with the potential to do something big but crashed out with 35 kilometers left. Gilbert was looking good, attacking again, but he too was left on the back foot when he suffered a mechanical issue.

Mikel Landa (Movistar) soon found himself in trouble when he hit the deck, and the 2017 Tour runner-up Rigoberto Uran (EF Education First) also ended up on the ground. That left the latter over a minute back and facing a long chase.

Bardet managed to rejoin with 25 kilometers left. Very soon afterwards Jasper Stuyven (Trek-Segafredo) attacked the peloton, getting up to the two leaders. However they were all reeled in soon afterwards, with Van Avermaet then taking the time bonus sprint ahead of Stefan Küng (BMC Racing Team) and Martin.

The Olympic champion was feeling good and when Yves Lampaert (QuickStep Floors) jumped clear on the Camphin en Pevele sector, he quickly reacted. Also there was Degenkolb, and together they built a 35 second lead with ten kilometers left. 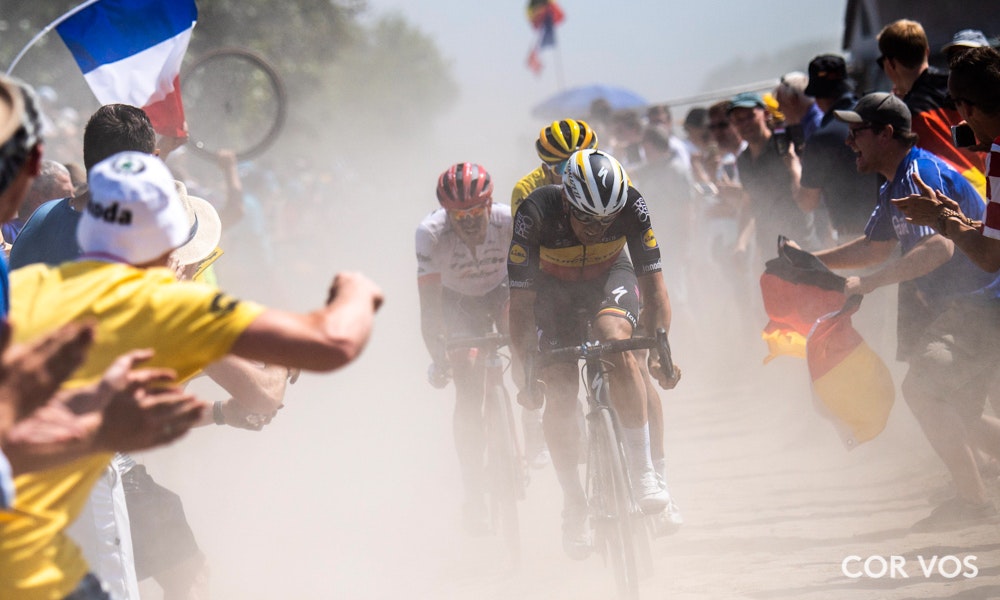 Back in the bunch, attacks were being fired up in a bid to get across. Alejandro Valverde (Movistar), Bardet and Primoz Roglic (LottoNL-Jumbo) were among the aggressors. However nobody was able to stay clear for any length of time.

The three leaders raced through the final sector and were well clear with six kilometers left. Back in the bunch Bardet had yet another mechanical issue and was delayed, continuing his testing day. The other GC riders were where they needed to be and tried to gain time on each other, with Chris Froome (Team Sky) and Tom Dumoulin (Team Sunweb) among those putting in moves but not getting clear.

Sagan surged and got away with Gilbert, Stuyven and Jungels. They had hoped to fight for the win but had too much ground to make up in the limited distance available. Degenkolb was instead the day’s big success, opening up the sprint and being strong enough to hold off a hard-chasing Van Avermaet and Lampaert.

Gilbert led in the chase group 19 seconds back, while the bulk of the GC riders were at 27 seconds. Landa and Bardet lost a further seven seconds, while Uran dropped one minute 28 seconds to his big rivals. Second overall last year, his agonizing day on the cobbles has put a big dent in his chances of another podium in Paris. 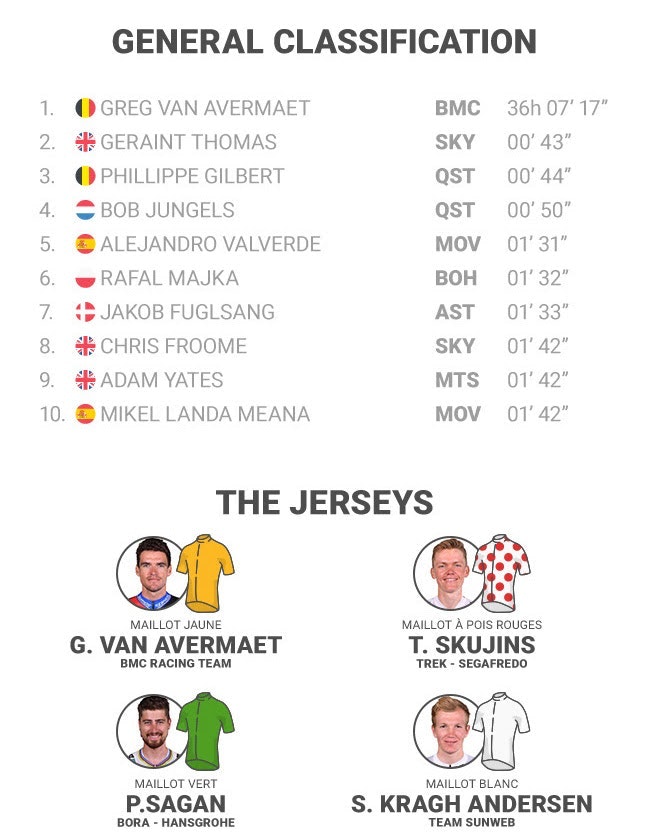