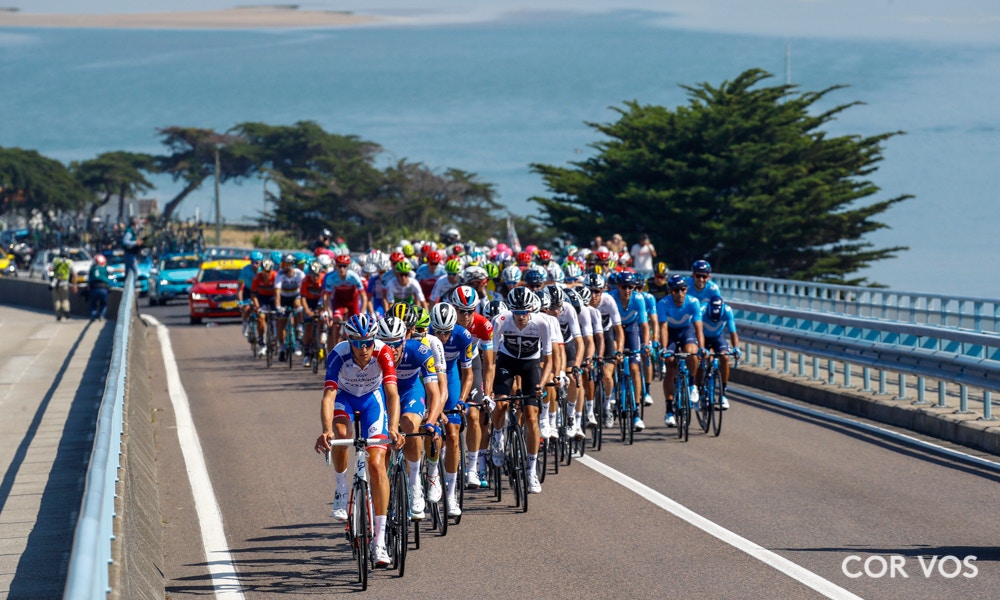 Fernando Gaviria had the perfect start to his first Tour de France, winning stage one into Fontenay-Le-Comte and grabbing the race’s first yellow jersey.

“It’s an incredible day,” said Gaviria. “It’s been a long time since Colombia last had this jersey. Many Colombians have tried to get it and it comes down to me. I dedicate this victory to every single team member, riders and staff, because without them, I wouldn’t be able to sprint.”

He said that the satisfaction of taking yellow was increased by the fact that “the whole world” wants to take it. “To get it leaves me lost for words but I’m surely happy to wear it. We’ll try to retain it as much as we can. It was a complicated finish with a bit of wind. But we always race united. We race as a family. We are a family. We respected the instructions. I’ve won also thanks to the help of all Colombians who support me.” 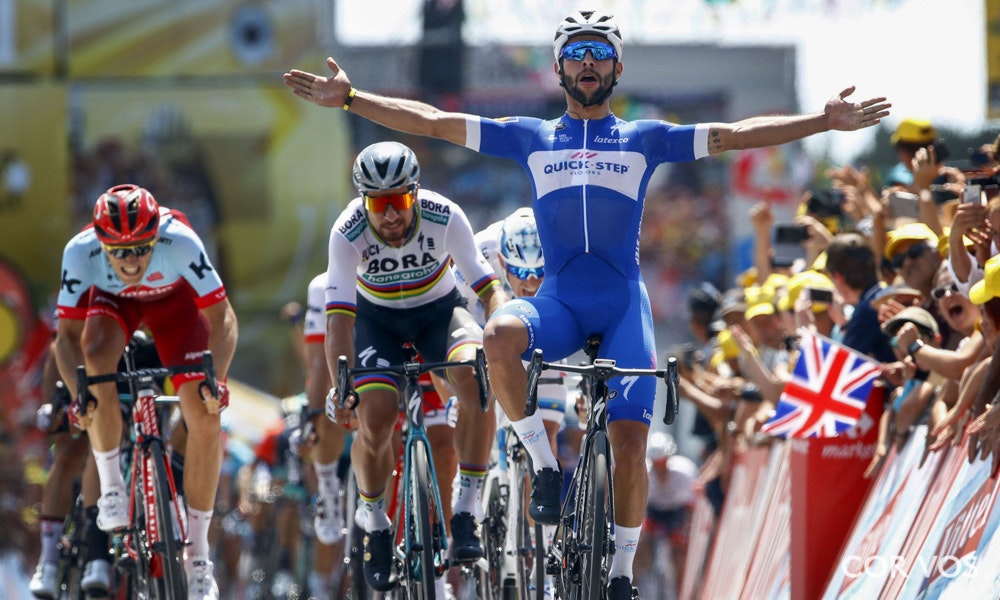 Mark Cavendish (Team Dimension Data) was tipped as a possible stage winner but was delayed close to the finish and left out of position. Worse off were general classification riders Chris Froome (Team Sky) and Richie Porte (BMC Racing Team), both delayed in crashes, and Nairo Quintana (Team Movistar), who suffered a puncture and a slow wheel change.

The general chaos in the final ten kilometers splintered the peloton into several groups, already shaking up the general classification with just over 200 kilometers of this year’s Tour covered.

Things were worse for Quintana, who lost one minute 15 seconds. Frustratingly for his team, he stopped somewhere between 200 and 500 meters before the three kilometer to go banner; if he had simply ridden his rear wheel flat tire until that marker and then pulled over, he would have been given the bunch time.

Froome did his best to shrug off his time loss. “Thankfully I am okay. I just came off in the last ten kilometers,” he said outside the Team Sky bus. “It was just one of those things. We always knew the first few days were going to be tricky, going to be sketchy, and that’s part of the game, unfortunately.”

“We were right at the front part of the peloton, in the top third. There wasn’t too much more the guys could have done. It was getting quite chaotic with the sprinters there, but that’s bike racing. I’m just grateful I’m not injured in any way. I feel fine. There is a lot of road to be covered before we get to Paris…” 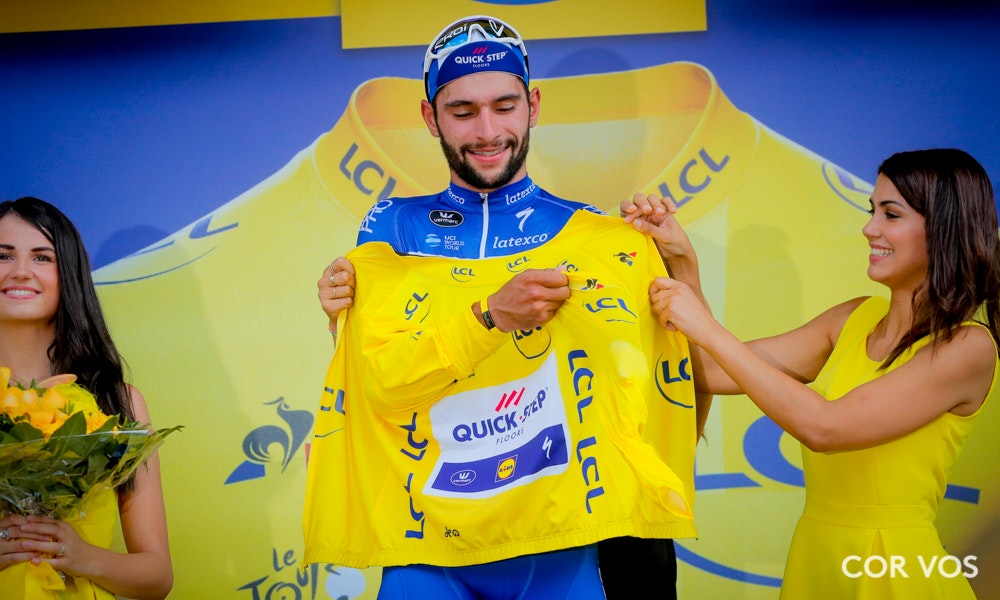 Stage one of the Tour de France ran 201 kilometers from Noirmoutier-En-L’Ïle to Fontenay-Le-Comte. With just one category four climb on the course, 28 kilometers from the finish, it was almost certain to finish in a bunch sprint.

There was also an intermediate sprint at kilometer 119.5, offering bonuses of three, two and one seconds for the first three riders across the line.

Expectations of a big gallop at the finish didn’t deter three breakaway riders, who scampered clear almost immediately after the drop of the flag. Jerome Cousin (Direct Energie), Kevin Ledanois (Fortuneo-Samsic) and Yoann Offredo (Wanty-Groupe Gobert) swiftly opened a gap. The peloton was content to give them some leeway and with the motivated break averaging over 46 kilometers per hour, they had four minutes’ lead after just over 35 kilometers of racing.

Behind, pacesetting was being done by the LottoNL-Jumbo team of 2017 Champs Elysees stage winner Dylan Groenewegen, the Dimension Data team of Mark Cavendish, Groupama FDJ for Arnaud Démare and Fernando Gavira’s QuickStep Floors.

After 100 kilometers of racing, the break was two and a half minutes clear of the peloton. Just under 20 kilometers later Cousin took the intermediate sprint ahead of Ledanois and Offredo, also picking up the top bonus seconds. But with a ten second bonus awaiting the stage winner, the intermediate sprint was unlikely to determine the yellow jersey. 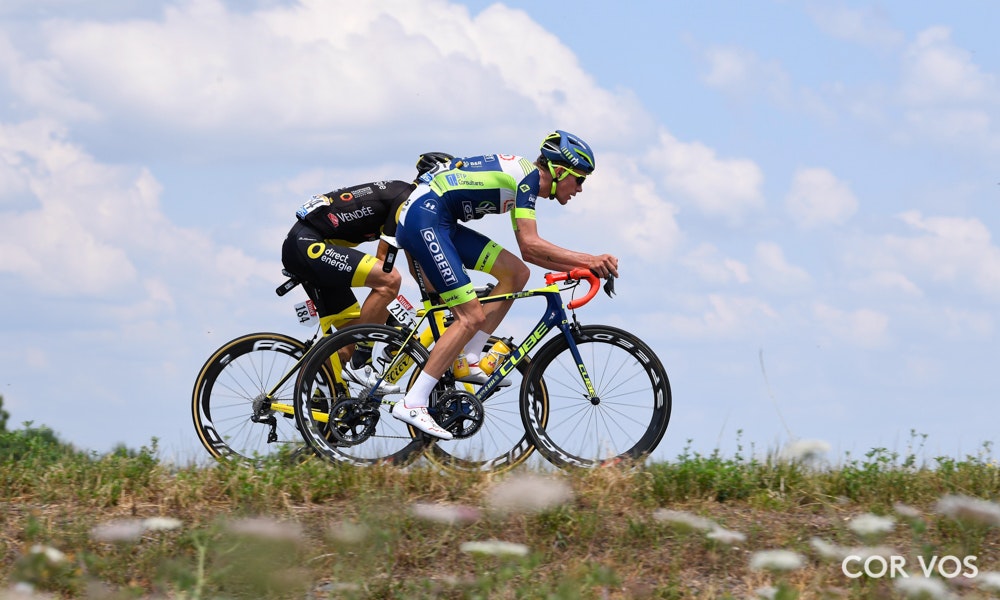 Behind, Gaviria beat Andre Greipel (Lotto-Soudal) and Démare for fourth, taking points towards the green jersey. Maciej Bodnar (Bora-hansgrohe) and Cavendish were next across the line.

With 35 kilometers left the gap between the break and bunch had dropped to one minute 14 seconds. Soon afterwards, Offredo attacked in advance of the day’s sole climb, the Cote de Vix. He made his move with approximately three kilometers to go before the start of that ascent, but the other two were able to get back up to him.

Ledanois then took the sprint atop the climb, thus ensuring a period of time in the polka-dot jersey. Job done, he sat up soon afterwards, leaving two out front.

Heading into the final 20 kilometers, Cousin and Offredo had just half a minute’s lead. There was a bonus sprint with just over 13 kilometers to go and Cousin took the three bonus seconds there. Behind, Oliver Naesen (Ag2r La Mondiale) got clear before the gallop and crossed the line just ahead of the break, taking third and one bonus second. 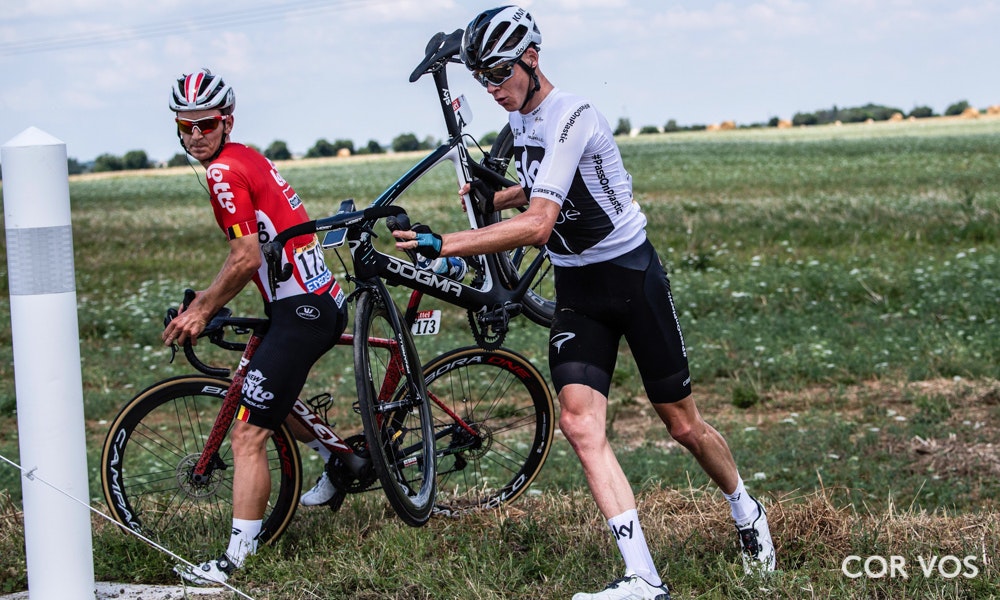 Inside the final ten kilometers a big crash delayed Démare and also Richie Porte (BMC Racing Team). Cousin and Offredo were caught, while Egan Bermal (Team Sky) was delayed in a later crash. Soon afterwards Bernal’s team leader Chris Froome flipped over a barrier and while he had a soft landing, was also delayed.

Also held up was another GC favorite, Nairo Quintana (Movistar), who punctured just outside three kilometers to go. Similarly delayed was Mark Cavendish, who lost his chance of a stage win.

Out front, Peter Sagan’s Bora-hansgrohe team was driving the pace to try to set up the world champion. However the QuickStep Floors team swept through closer to the line, setting up Gaviria perfectly and enabling him to grab the sprint win – and yellow – in his debut Tour.

Sagan had to be happy with second, while last year’s dominant stage victor Kittel settled for third. 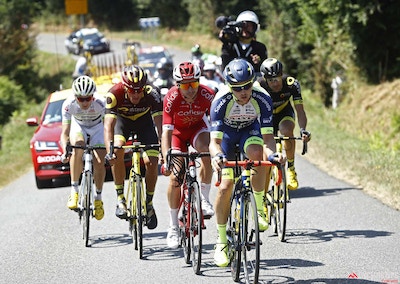 Stage six of the Tour de France featured another lumpy profile. It also included the toughest finish to date in the race....