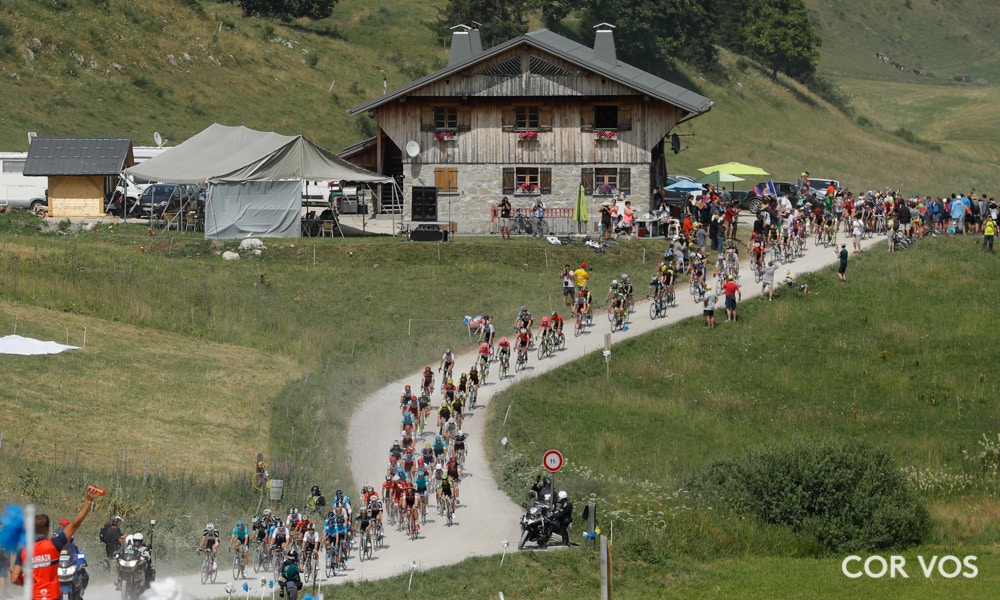 Young Frenchman Julian Alaphilippe took a superb victory at the Tour de France on Tuesday, winning the race’s first big mountain stage at Le Grand Bornand. The QuickStep Floors rider was active right from the start, being part of the day’s big breakaway, picking up big mountain points over the day’s summits and then striking for home on the penultimate climb, the Col de Romme.

He soloed over the top of the subsequent Col de la Colombière and sped down the descent, reaching the finish one minute 34 seconds ahead of Ion Izagirre (Bahrain-Merida) and a further six ahead of Rein Taaramae (Direct Energie). 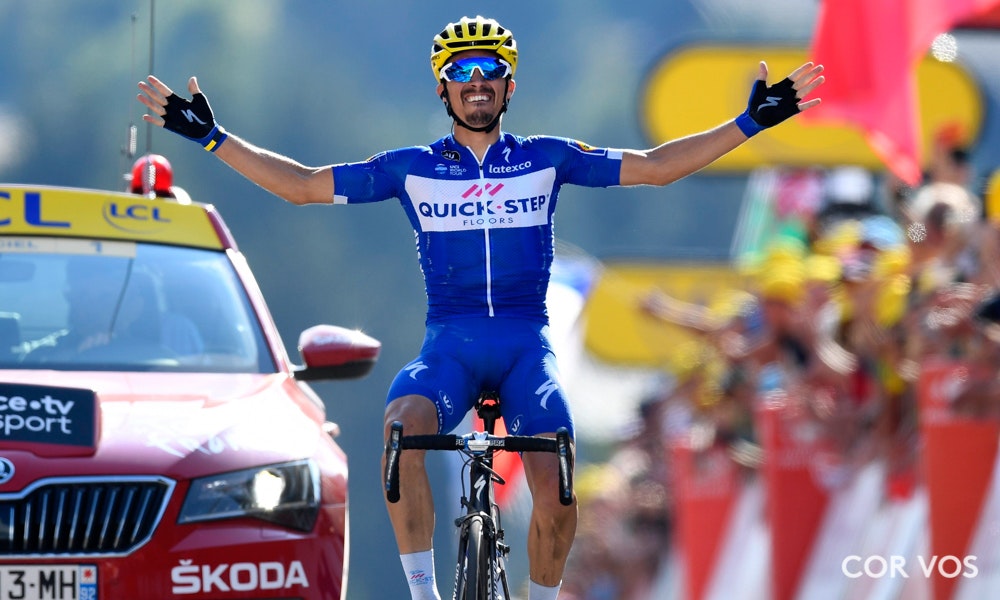 “To win a stage of the Tour is amazing,” he said. “I have no words to describe what I have done. I am thinking about my family and am really happy, really satisfied. Just delighted. I really want to enjoy myself after this victory.

“It was always an aim for me to be involved in the break. It was my goal to win this stage; I made no secret about that. I was a bit disappointed about the stage to the Mur de Bretagne, my legs didn’t feel great. Things just weren’t quite there, but this is the best way to answer the disappointment of that stage.”

His strong ride also saw him end the day as the new leader of the King of the Mountains competition.

Another rider of the day was race leader Greg Van Avermaet (BMC Racing Team), who got into the big break with Alaphilippe, Izagirre, Rein Taaramae and others, and who rode superbly in his defense of the yellow jersey. Performing on far hillier terrain than he normally excels on, he finished fourth, one minute 44 seconds behind Alaphilippe and just ahead of compatriot Serge Pauwels (Team Dimension Data).

“Two years ago I also went in the break with my yellow jersey,” he said. “That was super nice. I had to find the right moment. When the big group on the climb went I decided to go and see how Sky reacted. They didn’t react. We took directly six, seven minutes and I knew then it would be a good day for me.”

Asked if he expected to hold yellow, he said that he didn’t set out with that expectation. “I was not thinking about it but you have to read the race situation a little bit,” he said. “That is what I did. I was waiting for the right moment, then you come in a big group with guys who are going to go for the stage. And then I could keep the yellow jersey for another day.” 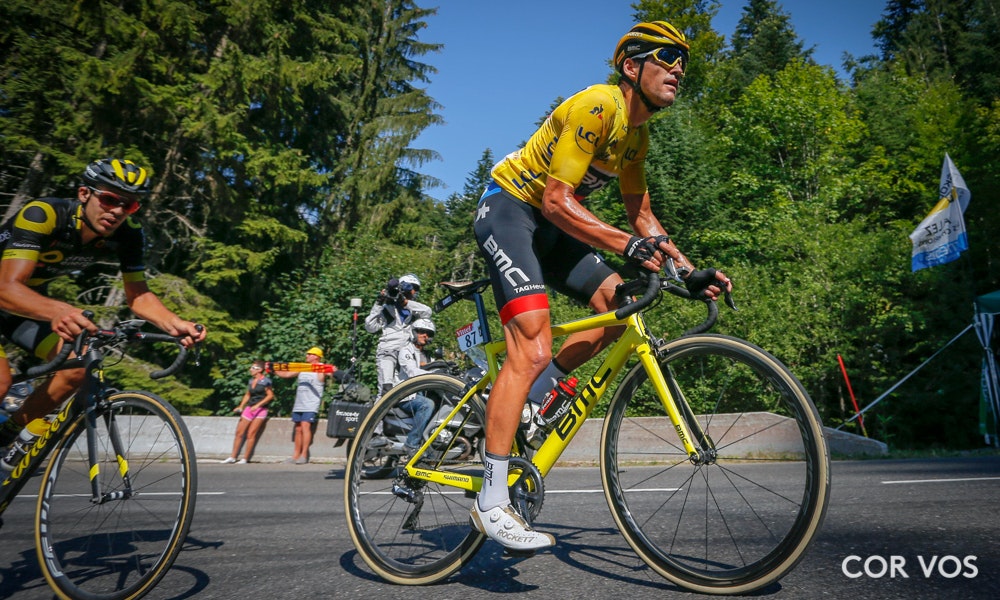 The race returns to the mountains on Wednesday but stage 11 will end with a summit finish. Van Avermaet was asked what he expects from the stage.

“Not much, I think. I think this was the maximum,” he said. “I went really deep today, and tomorrow is really a climber’s stage, super short. It will be super hard to keep it. I have really no intention. This was the day where I could maybe keep it, but tomorrow it will be game over.”

It is likely already game over for Rigoberto Uran, last year’s runner-up. He cracked on the day’s climbs and finished 5 minutes 59 seconds back. Together with his time losses from earlier in the race, he is now seven minutes eight seconds behind Van Avermaet.

Also losing time on Tuesday were Bob Jungels (QuickStep Floors), Ilnur Zakarin (Katusha-Alpecin), Bauke Mollema (Trek-Segafredo) and Rafal Majka (Bora-hansgrohe). They dropped 51 seconds to the other GC contenders, which is discouraging on the first day in the mountains.

Stage ten of the Tour de France was the first after the rest day, and plunged the riders immediately into the high mountains. Stage nine tested skill and power over the cobbles; stage ten would put climbing form under the microscope, and provide opportunity for a major reshuffling of the general classification.

The stage began in Annecy and covered 158.5 kilometres to Le Grand Bornand. The roads undulated for the first 29 kilometers, and were then almost constantly up and down between there and the finish. The course featured five categorized climbs, namely the category four Col de Bluffy (km 19), the category one Col de la Croix Fry (km 43), the hors categorie Montée du plateau des Glières (km 68.5), and then the category one pairing of the Col de Romme (km 130) and the Col de la Colombière (km 144). The latter was followed by a mainly downhill 14.5 kilometers to the finish line, where a new-look general classification was likely.

In the long neutralized section several riders fell, including GC hope Mikel Landa (Movistar) and stage one winner Fernando Gaviria (QuickStep Floors). All the riders concerned were however able to get back to the peloton before the drop of the flag.

The attacks fired off right away, with Flèche Wallonne winner Julian Alaphilippe (QuickStep Floors) particularly active. He got away more than once, with the peloton reeling him and others in. However he pushed forward again on the day’s first climb and was joined by other riders such as points jersey leader Peter Sagan (Bora-hansgrohe), Tome Jelte Slagter (Team Dimension Data) and Elie Gesbert (Fortuneo-Samsic). Alaphilippe was first to the top of the Col de Bluffy, and was clearly intent on targeting the mountains classification.

Other riders also got across, including the race leader Greg Van Avermaet (BMC Racing Team). He was fully aware that he is not as strong as the specialized climbers, and realized that going away early on would both build a buffer before the final climb and also show him defending yellow with panache.

Sagan rode very impressively on the first climb, being motivated by the thoughts of the intermediate sprint between it and the Col de la Croix Fry. He was duly first to the line there, boosting his grip on the green jersey. 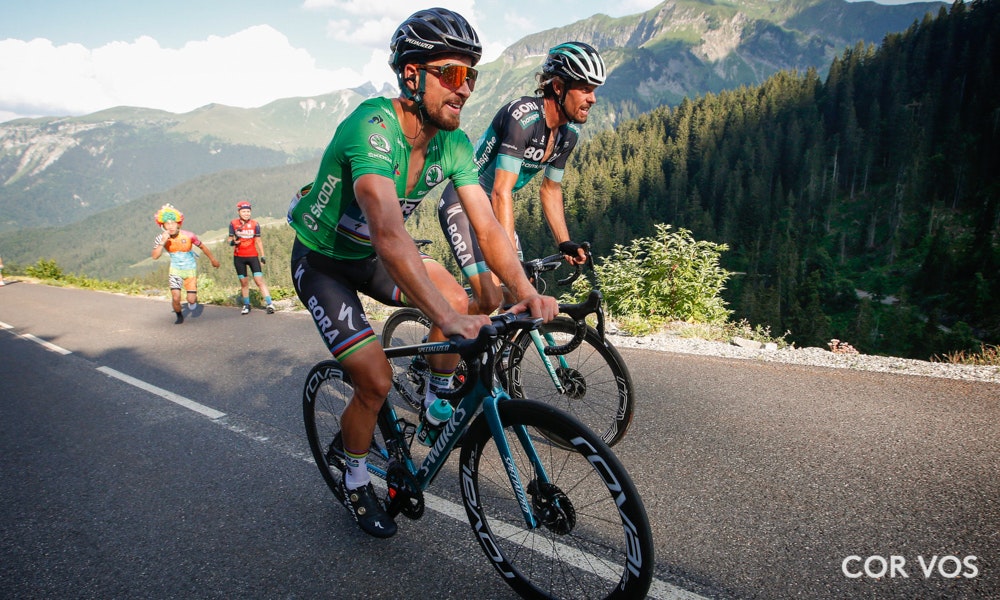 THE BIG CLIMBS REAR UP

The breakaway had almost three minutes starting the Col de la Croix Fry. Inside the final two kilometers of the climb, Molard attacked and was joined by Taaramae, who took the mountain points. Meanwhile Sagan was slipping backwards, satisfied with the gains for the points jersey.

The two leaders were joined by six others after the summit, namely Van Avermaet, Pauwels, Gilbert, Gaudu, Moinard and Postlberger. Four minutes later, the Team Sky-led peloton went over the top.

The eight leaders raced onto the slopes of the hors categorie Montée du plateau des Glières, where Molard and Gaudu drew Van Avermaet, Taaramae and Pauwels away from Gilbert, Postlberger and Moinard.

They were subsequently joined by Calmejane, Gesink, Alaphilippe, Martin, Moinard, Gesbert, Gallopin and Gesink, making it 13 leaders. Just before the summit of the climb Gaudu jumped away for the mountains points, but he was caught and passed by an impressive Alaphilippe.

Soon after the top of the climb the riders reached the gravel roads feature of the stage. Alaphilippe was still out front alone at this point, but waited for the others afterwards. Six minutes back, the peloton hit the same sector and there Chris Froome (Team Sky) punctured. He got a replacement wheel from a teammate, chased back on, but then sat up to get a replacement bike. He then chased back on once more.

Out front, other riders who had been in the original break got back up to the leaders, making it 18 ahead. The gap with 63 kilometers left was seven minutes 40 seconds, and down to six minutes 20 seconds shortly before the start of the category one Col de Romme. 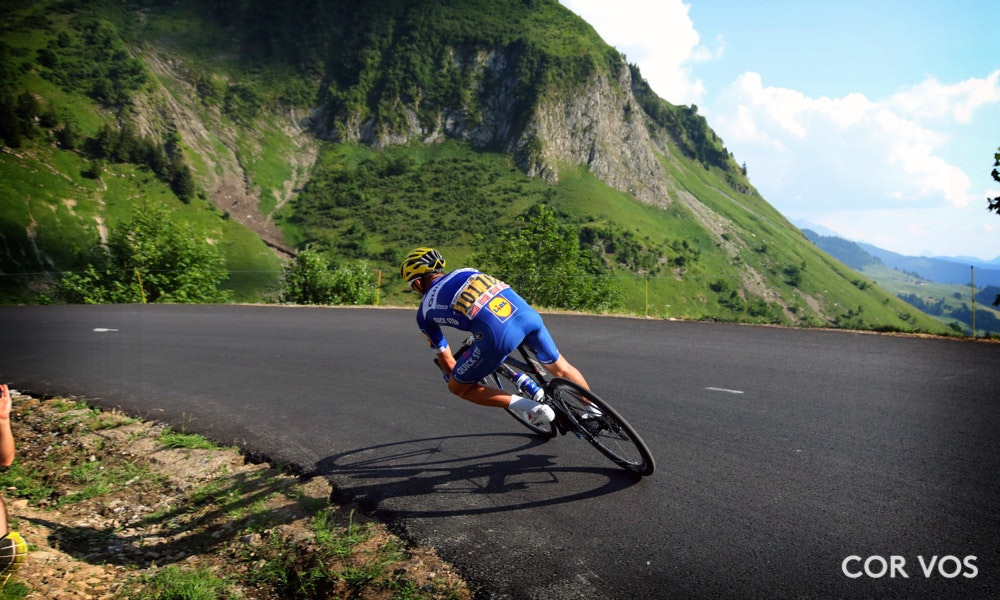 Calmejane attacked the break and got clear, while in what was left of the main bunch, Warren Barguil (Fortuneo-Samsic) surged ahead in what would be a short-lived move.

Calmejane was caught and Taaramae then attacked the break, which was once again shedding riders on the uphill. He opened a half-minute lead, prompting Gaudu and Alaphilippe to set off in pursuit. Alaphilippe dropped Gaudu and blasted past Taaramae to win top mountains points, then opened a growing gap on the descent.

Heading into the final 25 kilometers, he was 15 seconds ahead of Taaramae and over a minute clear of the next chasers. Then, onto the day’s final climb, the Col de la Colombière, he was 45 seconds clear of Taaramae with 20 kilometers to go. Van Avermaet was pushing ahead of the rest with Izaguirre and was one minute 37 seconds back, while the main GC riders were at six minutes and five seconds and out of the picture for the stage win.

Izaguirre dropped Van Avermaet, who still fought on in the knowledge that he could hold yellow or even boost his lead. He had ridden superbly in the mountains for a Classic specialist and remained motivated.

Each passing kilometer made the stage win more and more likely for Alaphilippe. He continued building his lead and with 17 kilometers to go, he was one minute 28 seconds ahead of Taaramae, who was being caught by Izaguirre. Van Avermaet was two minutes one second back, while the peloton was at 5 minutes 54 seconds. The biggest news there were the struggles of last year’s Tour runner-up, Rigoberto Uran (EF Education First-Drapac), who cracked and would finish well back.

Alaphilippe went over the summit and had just 14.5 kilometers of mainly downhill roads remaining. Izaguirre crossed the line second on the road, with Taaramae third. Behind, Van Avermaet and Pauwels were two minutes and 14 seconds back.

Dan Martin (UAE Team Emirates) was feeling aggressive and attacked the Team Sky-led bunch near the summit. He opened a gap, but with a headwind blowing Sky remained close. The peloton was four minutes 20 seconds behind Alaphilippe there, and still two minutes adrift of Van Avermaet.

Martin was caught on the descent by the peloton, while ahead Taaramae reeled in Izaguirre. There was no catching Alaphilippe, though, with the Frenchman racing on to the finish and taking a superb solo stage win.

Izaguirre sprinted in for second, one minute 34 seconds back, while Taaramae was one minute 40 down in third, just ahead of Van Avermaet and Pauwels. Dan Martin led in the GC contenders group, 3 minutes 23 seconds back.

Several key names lost time; Bob Jungels (QuickStep Floors) led in the next group a further 51 seconds back, with Ilnur Zakarin (Katusha-Alpecin), Bauke Mollema (Trek-Segafredo) and Rafal Majka (Bora-hansgrohe) also caught out on the Colombière and losing time. Even worse off was Uran, who trailed in a full 5 minutes 59 seconds behind. He was second overall last year but is out of the frame now for glory in Paris.