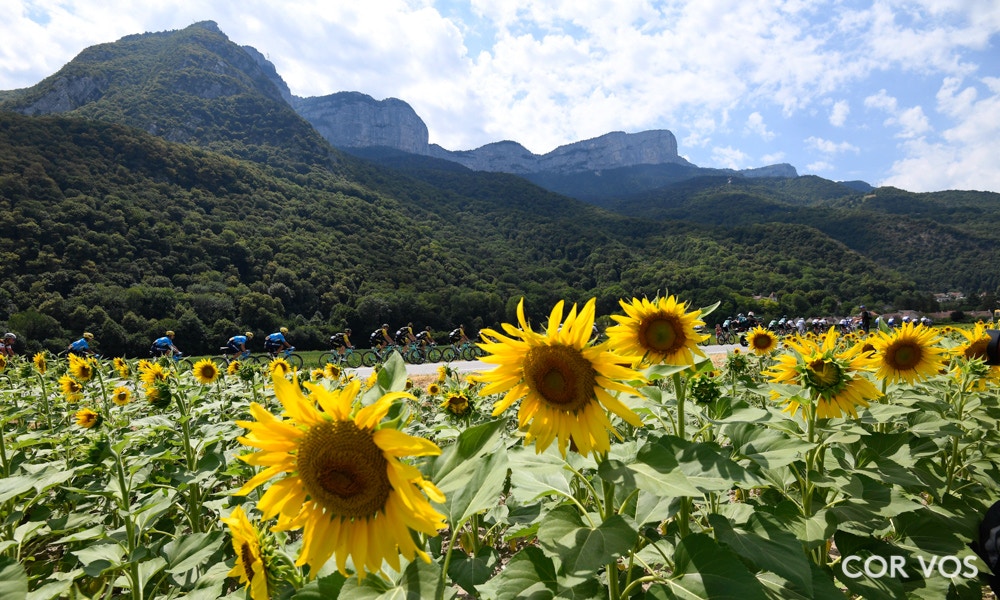 Out of the mountains, back to the sprints. Peter Sagan consolidated his grip on the green jersey by wining stage 13 of the Tour de France, hitting the line first in Valence. The world champion timed his effort perfectly, sweeping past Alexander Kristoff (UAE Team Emirates) and Arnaud Démare (Groupama-FDJ) and lunging for the finish.

The victory was his third of this year’s Tour and the 11th of his career. “This stage was like a piece of gold for us, I think,” he smiled. “It is fantastic. It was a flat stage, everybody could recover a bit in the group. I think everybody was happy in the bunch, they had a bit of a relaxed stage.

“I am very glad to win today, it is very nice for me. Thanks to all my teammates, who again did a perfect job. I was maybe a little bit late, I was a bit behind in the last 600 meters. On the last climb I tried to bring myself to the front and after I just stayed on the wheel of Kristoff. I was very happy to beat them.” 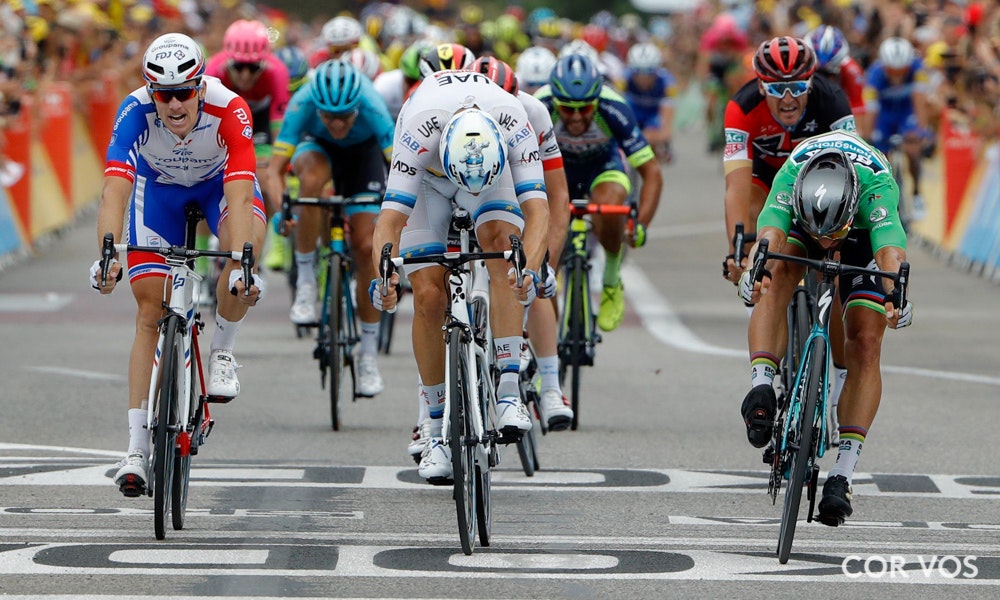 Sagan moves further and further ahead in the green jersey competition. When it was suggested to him that he has it sewn up, he said the job is not yet done. “It looks like [it], but it is still important to come to Paris,” he pointed out.

Kristoff took two Tour stages in 2014 but is yet to stand on that podium again. He went close, but was edged out inside the final ten meters. “Unfortunately he managed to come around me,” he said. “I tried to keep him behind, but he is unbelievable. He beat me like this many times, and again today.

He was adamant that he didn’t get his timing wrong. “I didn’t go too early. I waited until after Démare started and I kept the pace all the way to the finish line, but he was just faster. I was in a good spot, but it was not enough.”

Démare is French and was highly motivated to try to land the second Tour stage win of his career. His team did a huge amount of work to try to help that happen, but it was not to be. “I really thought I was going to make it today,” he said. “I did the sprint exactly as I wanted, but they were just quicker. Maybe I should have gone a bit earlier, maybe that would have helped me beat them, but I don’t know.

“I feel that I am not missing much for the stage victory. I just feel that Sagan is a stronger rider than me. I don’t have any regrets. With 40 kilometres to go I felt exhausted, but just went all in. The sprint was just about mental fortitude, and in the end I just didn’t have it.” 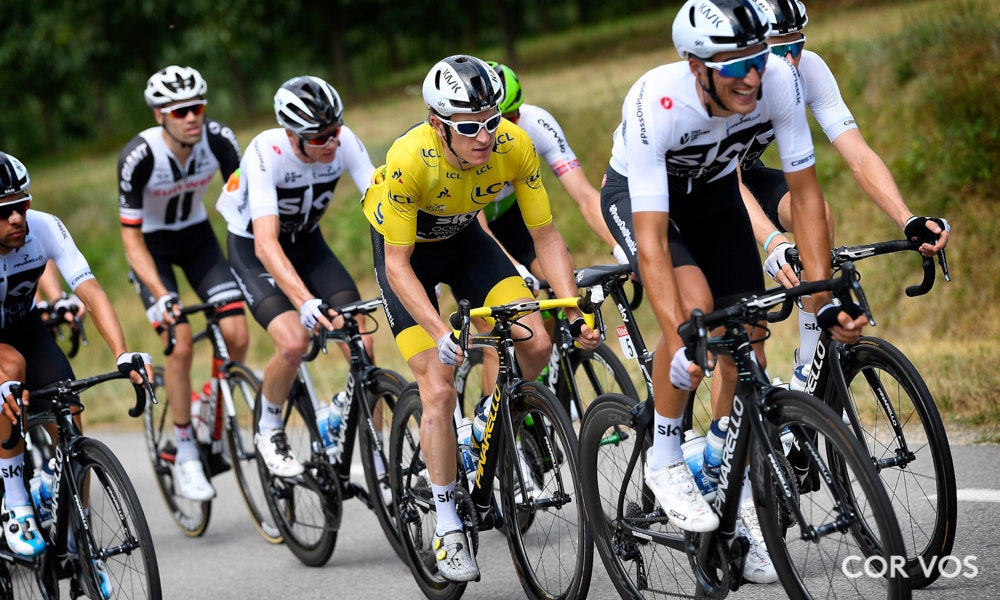 Race leader Geraint Thomas had a relatively stress-free day, being kept out of trouble by Team Sky. He maintained his one minute 39 seconds advantage over teammate Chris Froome, but will come under more of a test on Saturday’s 14th stage. This finishes in Mende and features a steep climb inside the final ten kilometers.

“I think there is a going to be a big fight for the breakaway,” he said. “In the final, even if the break succeeds, I think we will race behind. There could be gaps – we will see.”

He took back-to-back stage wins in the Alps and has surprised many, including Froome, with his performances. Asked if he considered overall victory in the race a possibility, he said that it was too soon to think along those lines.

“I am trying not to think about that at all,” he said. “It [Paris] is next Sunday, which doesn’t seem that far away. But there is a whole lot of racing to do before then. We will just try to keep the gaps we got and go from there.”

Tom Dumoulin remains one minute 50 seconds back in third place overall. He said that Friday’s stage was complicated slightly by sidewinds, but was otherwise fine. He said he wasn’t sure how much difference would be made on Saturday’s stage to Mende, but would look out for possibilities. 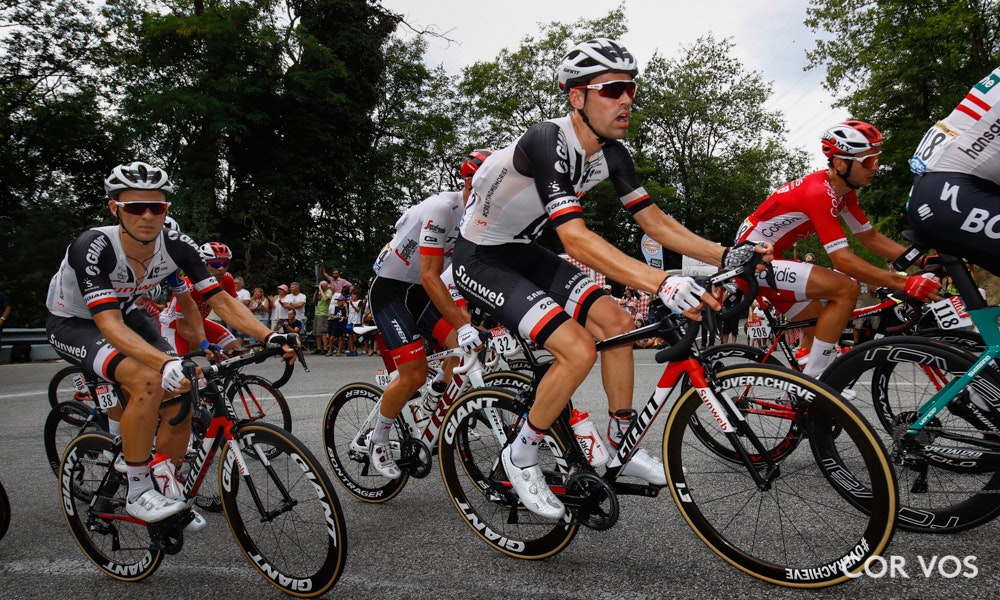 “If I see an opportunity I will always take it,” he promised. “It is just a short climb, but I hope there will be some differences…in my favor, of course.”

Asked if he thought there might be rivalry between Thomas and Froome that he might be able to take advantage of, he said he wasn’t banking on it. “So far I haven’t seen that,” he said. “I don’t know what will happen in the Pyrenees. I just have stay in my position now, hopefully improve that a little bit, and just hope for a bad day of Thomas or Froome or both.”

Like Froome, he also rode the Giro d’Italia. It has traditionally been very difficult to ride well in both it and the Tour, but both riders appear to be in strong form in the French race. In fact, Dumoulin suggests he might be at a new level.

“So far I am really happy with my condition,” he said. “I am even better than in the Giro, I think. But like you could see in the Giro also with some guys, that can change really quick. I just have to stay fresh and healthy.”

Following three days in the Alps, the profile of stage 13 of the Tour de France was much more sprinter-friendly. The 169.5 kilometer stage began in Bourg d’Oisans, the village at the base of Alpe d’Huez, and covered 169.5 kilometers to Valence. It featured some undulating roads, but just two categorized climbs; the category three Côte de Brié (km 32.5) and the category four Côte de Sainte-Eulalie (km 109.5). In between those two was an intermediate sprint at kilometer 71.

The favorable terrain came too late for the big guns who abandoned or were eliminated in the Alps, riders like Mark Cavendish (Team Dimension Data), Marcel Kittel (Katusha-Alpecin), André Greipel (Lotto-Soudal), Fernando Gaviria (QuickStep Floors) and Dylan Groenewegen (LottoNL-Jumbo), but gave encouragement for the other fastmen.

Of course, less sprinters made for more chances for the breakaway riders, making it certain that a group would go clear from a long way out. Right after the drop of the flag Thomas De Gendt (Lotto-Soudal) and Stefan Kung (BMC Racing Team) jumped clear and while this move was quickly reeled in, De Gendt went again.

EF Education First-Drapac rider Tom Scully joined him and Sylvain Chavanel (Direct Energie) set off in pursuit. The Frenchman couldn’t make it up to the two leaders, but a subsequent chase by Michael Schar (BMC Racing Team) and Dimitri Claeys (Cofidis) was more successful. They made the junction just under 30 kilometers from the start, by which time the break had a lead of three minutes and 20 seconds. 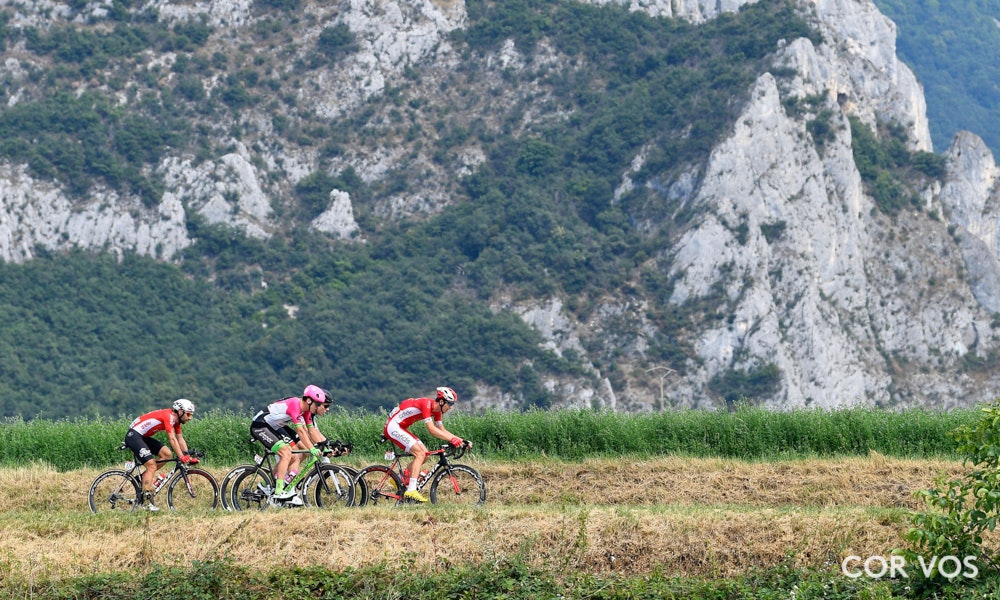 De Gendt led over the top of the Côte de Brié (km 32.5), with the peloton two and a half minutes back at that point. Bora-hansgrohe, Groupama-FDJ and UAE Team Emirates teams started chasing and cut this back by a minute. However by the time the leaders got to the intermediate sprint, the advantage had grown again to two minutes and four seconds.

De Gendt was best there, while back in the bunch Alexander Kristoff (UAE Team Emirates) and John Degenkolb (Trek-Segafredo) took the points ahead of green jersey Peter Sagan (Bora-hansgrohe).

The gap continued to oscillate after that point; it increased to over two minutes and ten seconds by the feed zone, then dropped to one minute and five seconds by the top of the second climb. Scully took top points there.

The peloton was trying to keep the quartet close but not bring them back too soon. With 35 kilometers left the gap was 48 seconds, and this was nibbled back to 30 seconds with 30 kilometers left. The pressure told on the riders in the break and Schar pushed on alone, settling into a low position to try to cleave through the wind.

The sprinters’ teams mopped up the other three riders and continued to set the tempo. Schar’s determined ride saw him hold a 23 second gap with 15 kilometers left, and the same margin with ten kilometers remaining. He continued to pound the pedals but was recaptured with 5.7 kilometers left.

Team Sky drove the bunch to try to keep Geraint Thomas and Chris Froome safe. Trek-Segafredo and Groupama-FDJ swept through to try to set up John Degenkolb and Arnaud Démare respectively. Just inside one kilometer to go Philippe Gilbert (QuickStep Floors) jumped hard and got a big gap. FDJ-Groupama chased hard and got him back with about 300 meters to go. Demare then launched, Kristoff came off his wheel but Sagan went past the two of them, taking the victory with a well-timed lunge to the line.