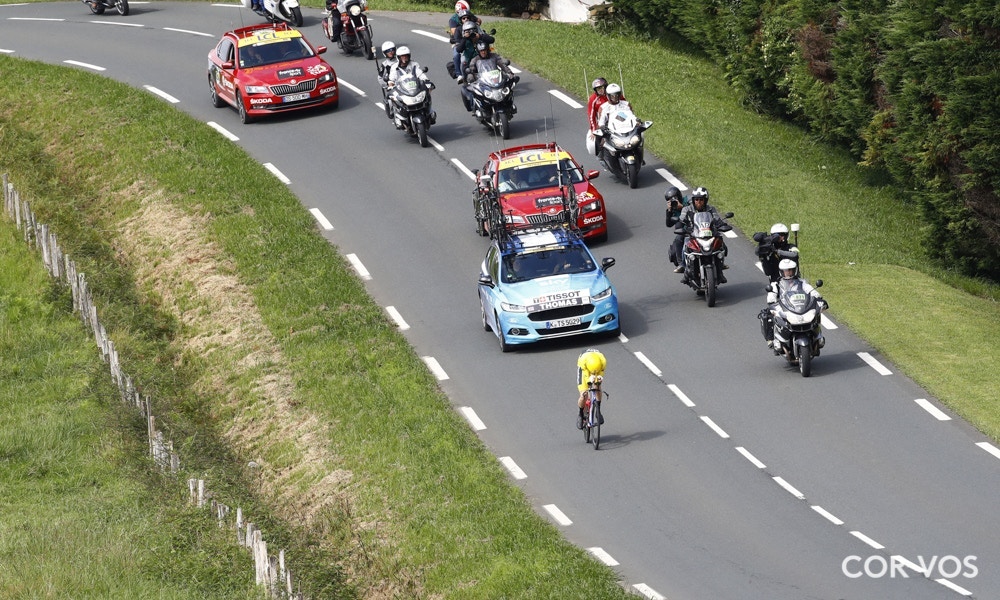 World champion Tom Dumoulin underlined how he earned the rainbow jersey, timing his effort perfectly in the stage 20 time trial to take the third Tour de France stage win of his career. The Team Sunweb rider was behind his rivals Geraint Thomas and Chris Froome (both Team Sky) at the intermediate checkpoints, being 16 seconds behind Thomas at the first and 15 seconds back at the second.

However he blitzed the final part of the tough 31 kilometer TT, beating Froome by one second and Thomas by fourteen.

“That is crazy,” he beamed, giving his reaction. “I didn’t know anything about split times, I never know. I still thought Froome was one second ahead of me when I crossed the line here. Everyone said I was second at one second. That’s crazy, wow…

“It was an amazing last day. I was so nervous. This morning we found out that I lost a skinsuit. So Etxeondo, our clothing supplier, made a new one. They were sewing a new one this morning and I am forever grateful. Otherwise I wouldn’t have been in this beautiful rainbow jersey.” Dumoulin had a tough ride on Friday’s final mountain stage, doing a lot of riding in the finale to try to limit the gains of Primoz Roglic. He was trying to prevent the Slovenian from overtaking him in the general classification, and managed to do so. However it remained to be seen how that would affect him in the time trial.

“I had such a hard time yesterday,” he admitted. “I think all the frustration came out after the finish. Today I can’t believe it. This is amazing…one second.”

Roglic had looked like the rider most in shape and, after he overtook Froome for third overall, many expected him to hold a podium position to Paris. However he was below par in the time trial, finishing only eighth. He lost one minute and 12 seconds to Dumoulin, and one minute 11 to Froome, slipping to fourth overall. There were two other changes in the top ten. Romain Bardet (Ag2r La Mondiale) overtook Mikel Landa (Movistar) for sixth, while Ilnur Zakarin (Katusha-Alpecin) overhauled Nairo Quintana (Movistar) for tenth.

Thomas was jubilant at the finish, with the elation then giving way to tears of emotion. “I don’t know what to say, it’s just overwhelming,” he said. “I didn’t think about it at all but… I’ve won the Tour man! “I felt good, I felt strong, I felt really good actually and I was pushing a bit hard on the corners and [Sport Director] Nico Portal told me to relax, take it easy and just make sure I win the Tour. And that’s what I did – it’s overwhelming.”

He ends the day one minute 51 ahead of Dumoulin and two minutes 24 up on Froome. Roglic and Kruijswijk are next, 3 minutes 22 and six minutes eight seconds behind respectively, with Bardet up to sixth.

“I thought I could beat the guys here,” Thomas continued. “But to do it on the biggest stage of all, over three weeks…that’s insane. Last time I cried was when I got married…I don’t know what’s happened to me.”

The penultimate stage of the Tour de France followed those in the mountains and tested an altogether different skill: that of time trials. The 31 kilometer individual test between Saint Pée sur Nivelle to Espelette was undulating and difficult, making it rather more difficult to predict than flatter TTs earlier in Grand Tours.

One additional factor is freshness: the final time trial in three-week races is often as much down to this as it is to TT strength.

The first rider off was Lawson Craddock (EF Education First-Drapac), who fractured his shoulder on the opening stage of the race but who has nevertheless been able to soldier through. That’s a superb act of courage, and he will complete his first Tour on Sunday.

Of those, two would not wear their national jerseys: race leader Thomas and best young rider Latour.

Craddock recorded a time of 47 minutes 34 seconds, and was then beaten by Jay Thompson with 46 minutes 9 seconds. Marco Marcato (UAE Team Emirates) and Michael Hepburn (Mitcheton-Scott) each went faster. Hepburn’s time was substantially quicker, with the Australian recording 42 minutes 15 seconds. “It’s a really hard course. I hadn’t seen it,” he told LeTour.fr. “I decided to sleep in this morning instead of coming ride the course. It’s up and down, windy, you get a 30 second rest in a descent and it’s up again for one minute. It’s really challenging.”

His teammate Luke Durbridge also performed strongly, slotting into the second-fastest position. He was one minute 13 seconds back. However Nils Politt (Katusha-Alpecin) then went faster than Durbridge, recording a time 29 seconds off that of Hepburn. Jonathan Castroviejo (Team Sky) went even closer, coming in eight seconds short of that fastest mark.

Soon afterwards, though, Marc Soler (Movistar) did beat Hepburn’s time. He went 5/100ths of a second quicker, taking over in the hot seat. However he didn’t last long there, with Soren Kragh (Team Sunweb) smashing his time, averaging 44.6 kilometers to go 31 seconds better.

BATTLE OF THE GC CONTENDERS

The race favorites got their test underway and of those, Chris Froome had a lot to gain. He slipped from third to fourth overall when Primoz Roglic (LottoNL-Jumbo) won Friday’s stage, but wanted to try to get onto the final podium in Paris. Froome also hasn’t won a stage in the race, and had that incentive too.

His teammate Michal Kwiatkowski came through to the finish with the best time, beating Kragh by one second. Meanwhile Froome went quickest at the first intermediate check, improving the time of Ilnur Zakarin by five seconds. Surprisingly, Roglic was 30 seconds behind Froome at this point. As he had started the day just 13 seconds ahead, his third overall was suddenly endangered. Tom Dumoulin (Team Sunweb) is the world champion in the time trials and was one of the big pre-race favorites for the TT. However, he was two seconds behind Froome at the first time check. In contrast, race leader Geraint Thomas went quickest, beating Froome’s time by a full fourteen seconds.

Thomas was psyched to try to land a third stage win. He was pushing hard and almost came a cropper on a right hand corner. His wheels slipped, but he managed to stay upright.

Further ahead, Bob Jungels was going well and recording the second-best time at the second intermediate checkpoint. He thundered in towards the finish, chasing the best mark. However, he ran out of time as the final meters ticked down, netting provisional third. He was two seconds behind Kwiatkowski and one behind Kragh.

Further back, Froome was riding strongly and went through the second intermediate checkpoint quickest, beating Ilnur Zakarin’s time by 28 seconds. In contrast, Roglic was floundering. He went through that point next and was a considerable 50 seconds back, his podium dreams going up in smoke. That will doubtlessly leave him wondering if he went too deep in chasing his stage win on Friday.

Dumoulin was next to the intermediate checkpoint, going through two seconds slower than Froome. Thomas was still flying, though, and was 12 seconds better than his teammate.

The GC riders were coming into the finish one by one, with climbers like Dan Martin (UAE Team Emirates) and Mikel Landa (Movistar) losing time. Steven Kruijswijk (LottoNL-Jumbo) fared better, coming in 54 seconds behind the fastest time. Froome finished very soon afterwards, smashing the previous best pace of Kwiatkowski by 51.98 seconds. That left just three riders out on the course: Roglic, Dumoulin and Thomas. Roglic had hoped to take third overall in the Tour but his hopes were dashed by Froome’s strong ride. He gave it everything coming into the finish but was a provisional sixth on the stage, losing one minute 14 seconds to Froome.

Dumoulin was a different story. He had been accelerating out on the course, picking up speed as the stage went on. He thundered in one second faster than Froome and moving into the hot seat. All eyes were on Thomas, who had been faster out on the course but who faded in the final part and finished 14 seconds back in third.

The Welshman would have liked another stage win but the big priority was holding yellow. He crossed the line and punched the air, celebrating what will almost certainly be a Tour stage win in Paris on Sunday. He ended the day one minute 51 seconds ahead of Dumoulin, with Froome at two minutes 24 seconds. Roglic, who dreamed of being on the podium in Paris, slipped to fourth, three minutes 22 back. 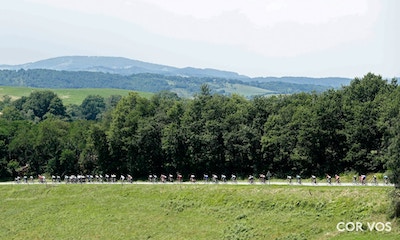 Stage 16 of the Tour de France was a very testing one, with five categorized climbs enlivening the 218 km route between Carcassonne and Bagnères de Luchon....