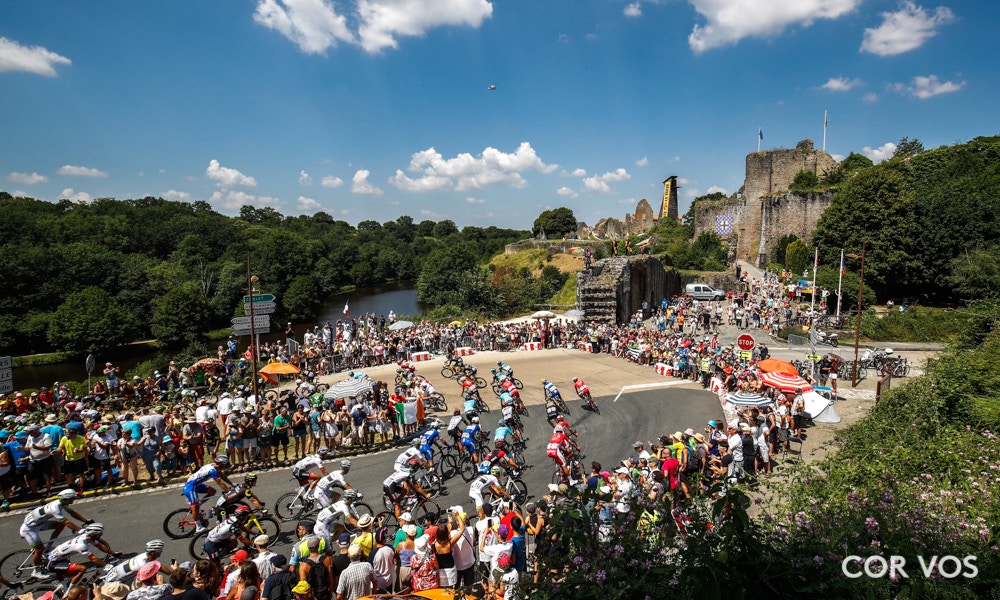 Andre Greipel (Lotto-Soudal) and Alexander Kristoff (UAE Team Emirates) were fourth and fifth, while stage one winner Fernando Gaviria (QuickStep Floors) was brought down in a crash close to the line and lost both his chance of victory and also his Maillot Jaune.

Also deprived of a chance to chase stage success was Michael Matthews (Team Sunweb), who was similarly delayed in the incident.

Sagan’s sprint saw him cross the path of John Degenkolb (Trek-Segafredo), bringing the German rider from the middle of the road to sandwich him against the barriers. He raised his hand in protest, but the stage result was not overturned.

Sagan ended the day six seconds clear of Gaviria, while Sonny Colbrelli (Bahrain-Merida) was at ten seconds in third. 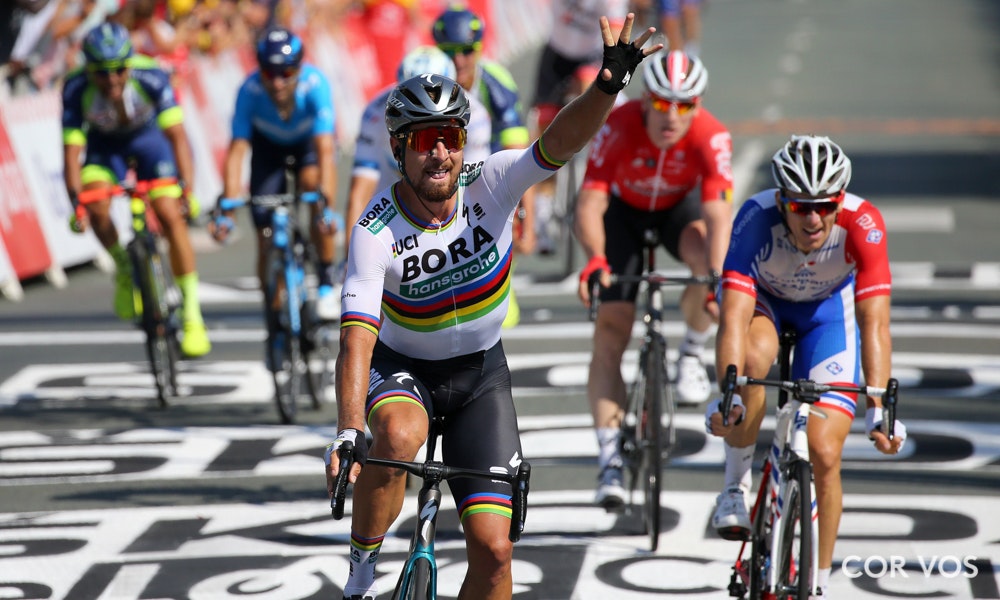 “I am really happy for today,” said a smiling Sagan. “I have to say a big thanks to all my teammates. They were in the front for the last 30 kilometers. In the end I expected something more easy, but it was really tough, up and down, turning right and left, a little bit of descents and then after it started to climb again. I said more later to start [the sprint] was better today.

“Demare started, Degenkolb. After I just overtook them, and I was really lucky that Colbrelli didn’t jump me.”

The Italian said that he lost out by not going soon enough. Had he done so, he wouldn’t have had as much ground to make up.

“I was sitting in the wind trying to stay on Sagan’s wheel,” he said, “and when I did, he anticipated me.

“I recovered a few meters but it was not enough. It was a difficult sprint, everyone is full of energy and they want to stay in front to try to win. The finish was very insidious with several dangerous corners. But this is the Tour.” 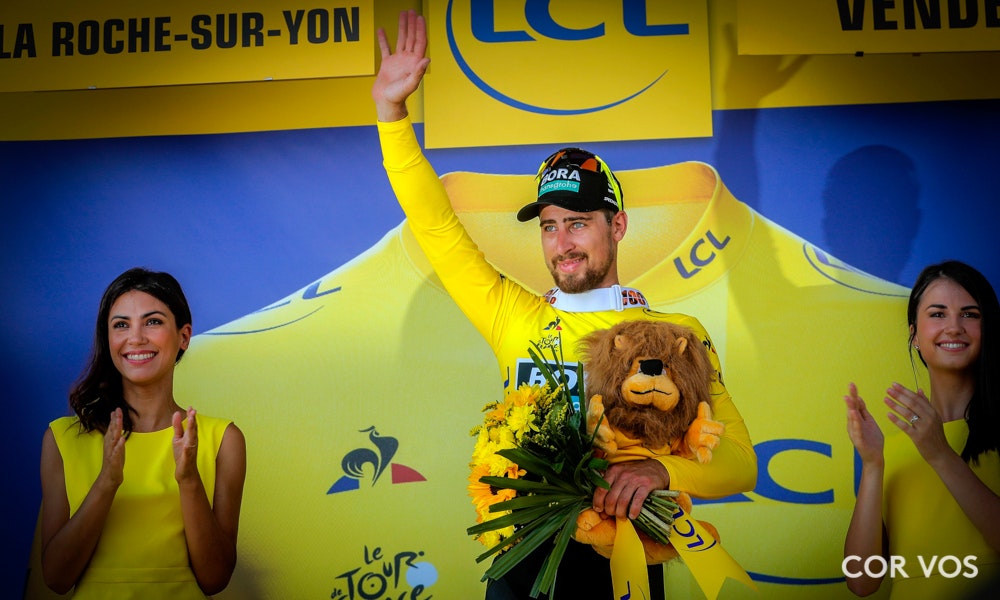 Sagan’s stage win put him back into the yellow jersey, two years after wearing it early on during the 2016 edition. He passed over the chance to wear the green jersey after his runner-up slot on stage one, preferring to be in the world champion’s colors for stage two, but will embrace yellow for Monday’s team time trial.

“I am very happy about that,” he said, speaking about the jersey and also the stage win. “I have a lot of friends here today from my home city, as well as my father. It is very nice to thank them with this victory, which is also for my son Marlon.”

In terms of its profile, stage two of the Tour de France looked very similar to stage one: a long, flat day in the saddle with just one category four climb along the route. This time around, the ascent came early on in the day, with the Côte de Pouzauges coming just 28 kilometers after the drop of the flag.

The attacks began immediately after the drop of the flag, with French veteran Sylvain Chavanel (Direct Energie) scarpering and being joined by Michael Gogl (Trek-Segafredo) and Dion Smith (Wanty-Groupe Gobert). Their gap quickly grew to one and a half minutes, then escalated to almost three minutes just before the start of the day’s climb. 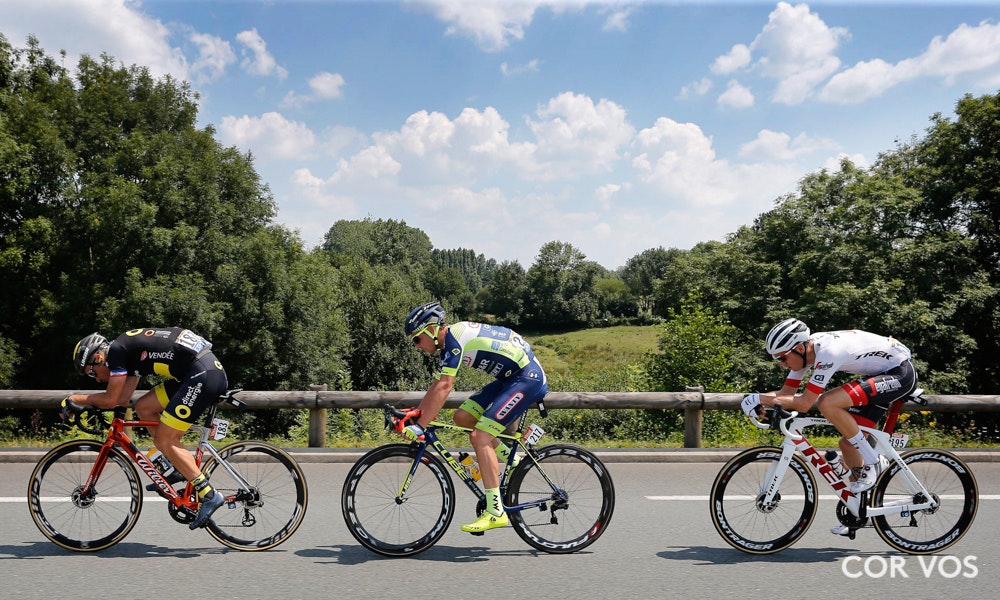 Smith was first to the top, earning himself a likely stint in the King of the Mountains jersey. This satisfied him enough to sit up out of the break and, with Gogl deciding to get some medical treatment from the doctor’s car, Chavanel pushed on alone. The multiple French time trial champion is well used to solo efforts and increased his lead to almost four and a half minutes with 100 kilometers left.

The QuickStep Floors team of stage one winner and race leader Fernando Gaviria was chasing and gradually brought the gap down from this point. However the team sat up later on and Chavanel’s buffer grew once again, increasing to over four minutes with some 60 kilometers remaining.

He took top points at the day’s intermediate sprint, with Peter Sagan (Bora-hansgrohe) beating Gaviria and Alexander Kristoff (UAE Team Emirates) back in the bunch. With 40 kilometers remaining Luis Leon Sanchez (Astana) hit the deck and was forced to withdraw from the race. Just under ten kilometers later Adam Yates (Mitchelton-Scott) crashed, but was fortunately not badly hurt. He was able to rejoin the bunch without too much energy wasted.

With approximately 24 kilometers left, Chavanel’s advantage was down to one minute and ten seconds. This continued to plummet and he had just a handful of seconds at the day’s bonus sprint, 14 kilometers from the finish. Philippe Gilbert (QuickStep Floors) and Geraint Thomas (Team Sky) took second and third, with Chavanel caught very soon afterwards.

Team Sky set the pace inside the final ten kilometers, trying to help their leaders stay out of trouble after Chris Froome’s crash on stage one. With 7.7 kilometers left Marcel Kittel (Katusha-Alpecin) had a puncture and was forced to change his bike, making it impossible for him to dispute the sprint.

Bora-hansgrohe’s riders did what they did on stage one and led the peloton into the final kilometres. Gaviria’s QuickStep Floors took over with 3.5 kilometers left, then Lotto-Soudal pulled ahead with just over two kilometers left. Very soon afterwards a big crash took down several riders, including Gaviria, Michael Matthews (Team Sunweb) and others, and reduced the list of stage contenders to a small group.

Démare went early in the gallop but Sagan was tracking him closely, then blasted through to win. His success earned him another stint in the yellow jersey, and also put him back atop the Tour stage winner’s podium for the first time since being disqualified from last year’s race.

Gaviria was undoubtedly disappointed to lose yellow, but was philosophical after the stage.

“Cycling is just like this: one day you win, the following day you crash,” he said. “My teammates did their best, but on the last corner a rider went straight and caused a crash. I enjoyed this day with the yellow jersey a lot. It felt fantastic. I just hope to get to wear it again in the future.”

He is just six seconds back and his QuickStep Floors team is often powerful in the team time trial. So, in theory at least, he could find himself back in the prized garment. However he’s taking nothing for granted.

“I don’t know about tomorrow. We will try to deliver a good result, but it will be difficult as there are a lot of teams who are great at team time trials,” he said. “Now it’s Peter Sagan the one who wears the yellow jersey, and I am happy for him.”