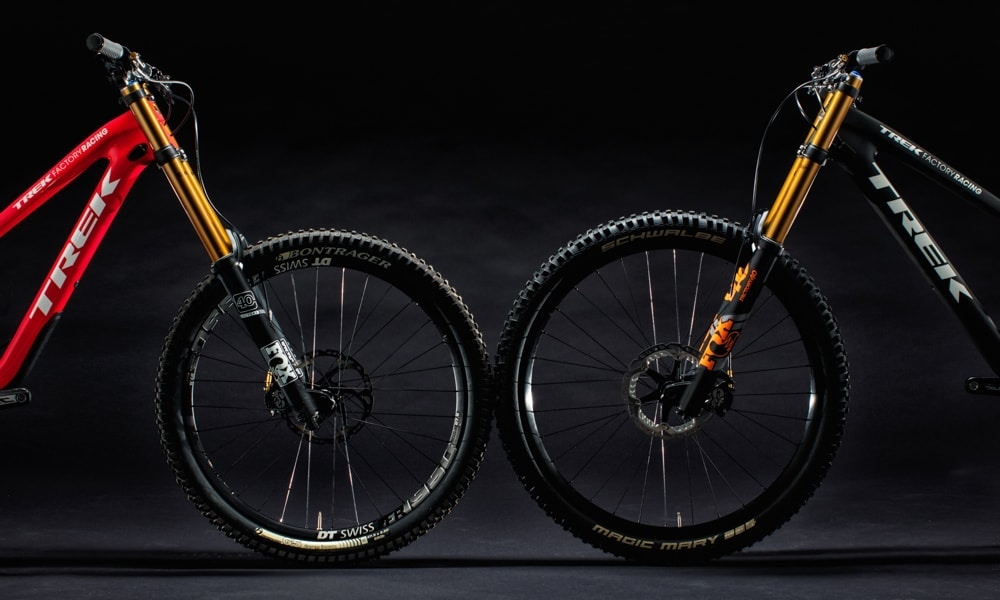 In the minds of those following the sport of downhill mountain biking, the internet just about blew up with news of the Santa Cruz Syndicate team making the move to 29er wheels for the opening UCI Mountain Bike Downhill World Cup round at Lourdes, France. Since then, a number of other brands have been coming out of the woodwork, admitting they too have been trialling the big wheels for an edge in a sport where hundredths of a second often defines the win.

Launching today, and just in time for the second UCI World Cup round at Fort William, Scotland, Trek have announced two new versions of its hugely-successful Session downhill bike. In addition to a new 27.5in option, there’ll be a 29er version too. Since its release in 2004, the Session has its name to the titles of four World Championships, two RedBull Rampages, 16 World Cups and five World Cup overall victories.

Will this new version be the bike to help Rachel Atherton continue her unbeaten 14 winning streak? Or will Australian, and new Trek Factory Racing signing, Graeme Mudd make himself known with the big hoops? Regardless of what happens, it’s pretty obvious that developments in the sport of downhill often have long-lasting effects on other forms of mountain biking. And with that, here are ten things to know about the new Sessions.

The wholly updated 2018 version of the Session 9.9 Carbon will continue with 27.5in wheels. Adding to this, there’s a frame kit option of a Session 29 (more on this later).

Trek state the updated Session Carbon 27.5 is still suited to 90% of the market, especially the usual downhill and park users. While the American brand suggested the 29er is a race-focused machine for experienced racers who are both early adopters and looking for a speed edge against the clock.

To make it clear. It’s only the carbon Session 9.9 and new 29 that get an overhaul here. For those wanting to get on the Session at a lower price, the Session 8 will continue in the line with the previous generation aluminium frame. Looking to the newly updated 27.5in version, the bike’s geometry sees some significant changes from the previous iteration. Most notably, the top tube lengths grow by approximately 20mm across each frame size, a change that’s the result of feedback from team riders, such as the Athertons.

The head angle has been slackened by just over half a degree, with it now sitting at 63-degrees out of the box and the option to go steeper or slacker from there (more on this later too).

Helping with stability, the bottom bracket sits 10mm lower. Notably, the existing 445mm chainstay length carries over, something Trek has decided to keep on the longer side to better balance the increased front center length. The new Session Carbon, much like all of Trek’s full suspension bikes, continues with the adjustable geometry ‘Mino Link’. This is a little flip chip that sits in the frame’s rocker link and allows for the choice of either a ‘High’ or ‘Low’ geometry position.

It’s likely most racers will set and forget the bike to the low setting, while the High settings offer a bottom bracket height that’s 8mm taller and a head angle that’s half a degree steeper. Or in other words, a geometry that’s nearly identical to the previous Session Carbon but with a longer top tube. Adding to the customization of this new bike, both frameset and complete bikes are supplied with CaneCreek fixed angle headset cups. Out of the box, the standard ‘flat’ headset cups are fitted which provide a 63-degree (or 63.5 in the High setting) head angle. However, with the option of the 1-degree cups and the use of the Mino Link, you can adjust the head angle anywhere from 62 to 64.5 degrees.

This isn’t a new concept and has been done in the sport of downhill for many years by riders looking to tweak their bike’s geometry, however, it’s not common for such cups to be included with the bike. And in the past, where angle-adjust headsets have been included, they’ve been the adjustable type which tend to moan and creak - not the fixed type supplied here.

5. Stiffer, but not heavier frame Full suspension frames are forever getting stiffer, but Trek claims to have achieved this without weight gain. This is most due to the removal of the Full Floater lower rear shock linkage, with the new Session moving to a fixed lower shock mount.

Full Floater was originally used to help tune suspension characteristics (extend the effective stroke of the stroke), however just like on Trek’s new Slash Enduro bike, this feature has been done away with as rear shock tuning has come leaps and bounds (more on this next).

While the Full Floater linkage design is no longer, the Session continues with Trek’s Frame ABP ‘Active Braking Pivot’ at the rear dropouts which help to separate braking forces from the suspension. Along with the removal of the Full Floater system, an obvious difference of the new carbon Session is the stock air shock. Trek state that they worked with FOX in the development of the Fox Float X2 rear shock. A shock that allows easy finite adjustment, including air volume customizing.

Handling the 210mm of rear wheel travel, this metric-sized shock has been designed to work well with the Session’s new lower leverage ratio and longer shock stroke. Along with being lighter and more easily tuned, it’s said to offer better mid-stroke support and small bump response.

Both the 9.9 and 29 come equipped with integrated frame protection to further protect the impact-resistant carbon. Most obvious are the Carbon Armour guards on the downtube, chainstays and seatstays.

Additionally, Trek continues with doubling the purpose of its Control Freak internal cable management system at the headtube to also act as a fork bumper. The discussion of 29ers in downhill racing seems to be brand-new to many, but the story goes a long way back. Like a number of other brands, such as Intense, Trek’s Gary Fisher brand experimented with long-travel 29ers back in 2009. Back then Trek’s research showed the bigger wheels were certainly fast, but the availability of suitable parts was a deal breaker.

At that time, and arguably since then, the development of downhill-orientated 29ers has always been held back by the availability of suitable forks, wheels and tyres. The recent uptake of 29ers in Enduro racing has fixed the wheel and tire issues, but only recently have suitable forks become available too – welcome the Session 29. The Session 29 shares just about all the same features as the new Session 9.9, albeit built to accept bigger, faster hoops.

With this, the wheelbase is of course longer (by about 10mm), the head angle is just shy of a degree slacker and the bottom bracket drop is greater to increase stability over the taller wheel. Whereas the 27.5in version offers 210mm of rear wheel travel, the 29 sees a slightly reduced 190mm.

For now, the 29 will be sold as a frame kit only. This frame kit includes the FOX X2 air shock, flat and angle headset cups and the new FOX 49 fork.