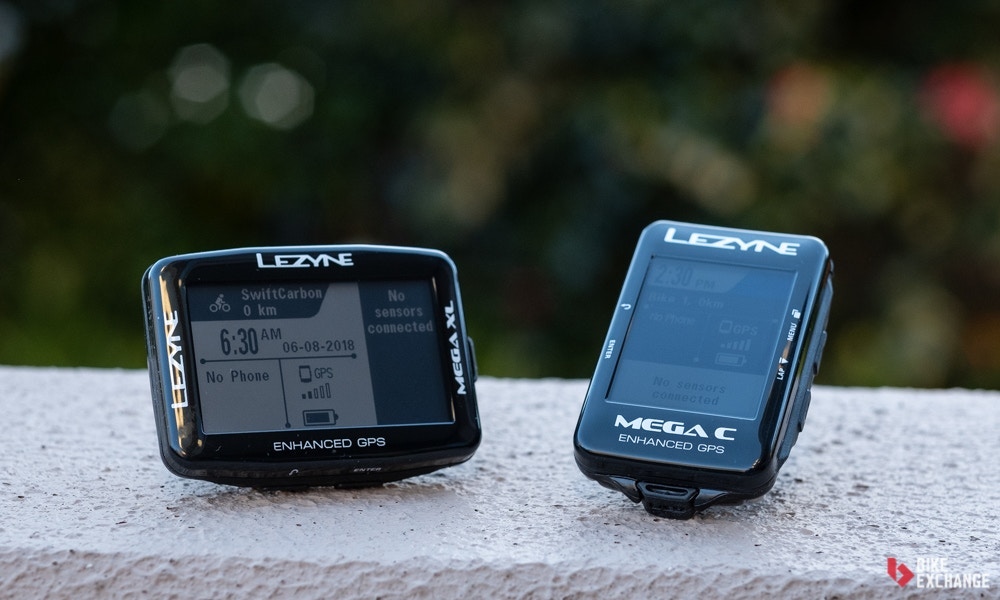 Bike computers have come a long way since the days of a magnet at the wheel and a button to toggle between speed, distance and time. Those basic computers still exist but have all but been replaced by the use of smartphone apps. Now, the modern bike computer aims to be a sleek dashboard for the enthusiast cyclist, providing useful information while saving your phone from the elements.

While Wahoo and Garmin fight for space as the mainstream GPS cycling computer choice, a handful of smaller brands have been jostling in more affordable price points. Bryton, Giant and Lezyne all sit in this latter category, doing an impressive job of mimicking the features and functionality of their more expensive competition. Raising the bar again, Lezyne recently announced two new cycling computers to headline its GPS range - the Mega XL and Mega C, each priced at AU$299. Both computers share a similar form, with the larger Mega XL offering a 2.7in black and white display, while the Mega C features a smaller 2.2in colored display. Interestingly, the larger Mega XL can be used in either a portrait or landscape orientation, while the Mega C is for portrait use only. Both computers feature four buttons, with no touchscreen function. The Mega XL and Mega C weight 81g and 77g respectively.

Perhaps the most notable feature is the extensive battery life. Lezyne claim 48 hours for the Mega XL and 35 for the Mega C. Compare that to 15 hours for the Wahoo Elemnt Bolt or Garmin Edge 520 Plus, and the figure is staggering. Time will tell just how well Lezyne meets its claim.

Each unit offers the same extensive list of connectivity options and features. For example, they’ll connect with both iPhone or Android phones via Bluetooth, and are equally as ready to sync to either Bluetooth or ANT+ accessories (such as heart rate straps, cadence or powermeters). The devices are capable of basic turn by turn directions while in sync with a mobile phone. “It’s also possible to upload maps for offline use, however, it’s a feature I’ve only just begun playing with,” says Rome. In addition to being able to create maps through Lezyne’s browser-based or mobile apps, the device will accept both .gpx and .tcx files manually loaded onto it.

“So far the function is proving intuitive and I’ve been able to set up the units without having to consult a manual. For example, I was getting phone alerts on the device within two minutes of first turning it on. Likewise, my setup with a Stages powermeter went without any hiccups.” The device pairs with Lezyne’s free Ally V2.0 app, allowing easy data field and setting changes with your phone, without the need of fiddling on the device itself. The app also serves as an automated connection to third-party applications, including Strava, Today’s Plan and Training Peaks.

The units ship with a single quarter turn mount and two sizes of o-rings for installation on either a stem or handlebar. A micro-USB cable is provided for computer connection and device charging. Lezyne offers out-in-front mounts separately, as well as sensors such as a heart rate strap or speed/cadence sensor. “It’s still early days for testing these units. As with many new items of technology, there’s likely a new firmware update to come out in near time. Still, early impressions often stick, and so far, it seems Lezyne has produced an extremely competitive and feature-packed computer that’s priced to beat the competition. If these computers prove to offer everything Lezyne claim, then they’ll be the value GPS computer to beat.”

Devices are pictured against a standard iPhone 7 for size comparison. Lezyne’s Direct X-Lock mount is pictured holding the Mega XL, and is available separately for purchase.

Stay tuned for a comprehensive review of the units over on CyclingTips in the coming months. Can't wait for the new units to drop? Check out the wide range of cycling computers available from leading retailers across the country right here, at BikeExchange