7 Talking Points from Week 2 of the Giro d'Italia 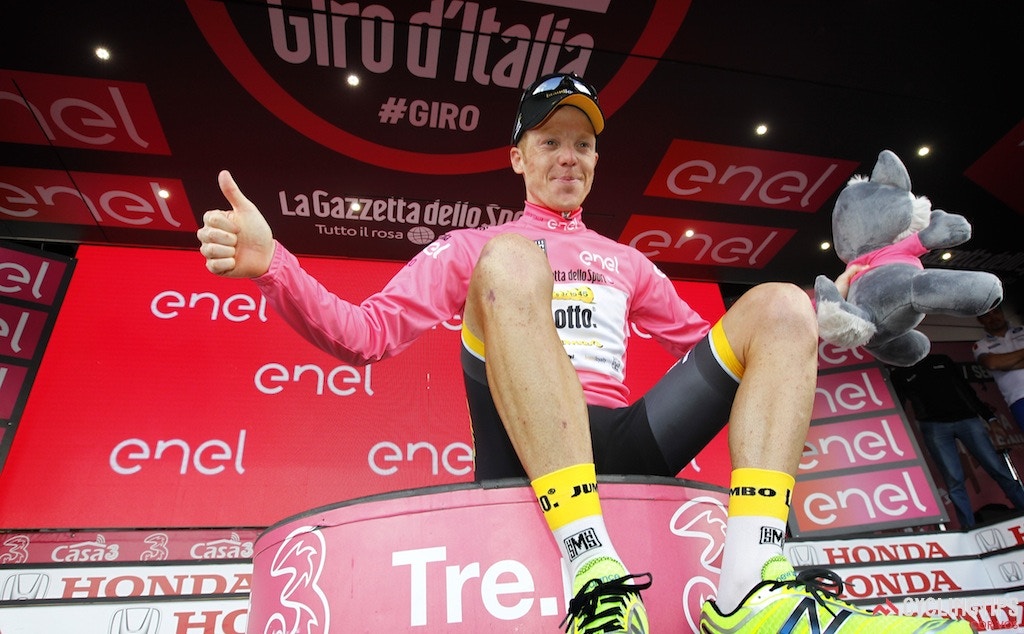 We’re 15 stages into the Giro d’Italia and the final week, like the mountains it features, is looming on the horizon. But before stage 16 begins, join us in a look back at the second ‘week’ of the 2016 Giro, a week in which most of the GC contenders faded and Steven Kruijswijk emerged as the rider to beat.

The 2016 Giro has been a breakout race for Bob Jungels

Bob Jungels (Etixx-QuickStep) was far from an unknown rider going into the Giro d’Italia — he’s won a handful of races in his young career already, not least the opening stage of the Tour of Oman this year. But in the past two weeks the Luxembourg road and time trial champion has gone from being a solid, well-respected rider into one of the most exciting and promising riders in the pro peloton.

A seventh place in the stage 1 time trial was a great start in a discipline he’s well suited to, and his fourth place in the stage 5 bunch sprint was even more impressive. Jungels again impressed in the stage 9 ITT, finishing sixth and moving himself into second place overall. And then a solid 15th in the following day’s uphill finish was enough to earn Jungels a stint in the maglia rosa.

Jungels would go on to lead the Giro for three days. Now, as the race moves deep in the mountains, the 23-year-old is still inside the top 10. Jungels currently leads the best young rider classification by a staggering 11:34 and, barring a major crash, will finish the race in white next Sunday. But the Etixx-QuickStep rider will be setting his sights higher than that.

Could Bob Jungels be a Grand Tour contender in the years to come, just like his compatriots Andy and Frank Schleck were? Given his performance in the past two weeks there’s no reason not to think so. He’s certainly got the time trialling ability, and with a few more years working on his climbing, we could see him spend a little longer than three days in pink.

More importantly though, Jungels is a sure thing to win the Best Hair Classification at this year’s Giro (see above).

Caleb Ewan might have left the Giro after 12 stages — like most of the sprinters — but he did so having learned a lot about his craft. As we wrote a week ago, Ewan would love to have won a stage, but the fact he didn’t certainly doesn’t mean his Giro campaign wasn’t a success. After solid performances in the first week, Ewan put in his best ride yet on stage 12, finishing second behind Andre Greipel.

As Andre Greipel noted in his post-race press conference, Ewan probably made a mistake by trying to pass the German on the right, a decision which meant Ewan was trapped against the barriers and had to stop pedalling briefly.

Whether Ewan would have won it had he gone left is unclear, but again, it’s all about experience for the 21-year-old. As Greipel said of Ewan: “His time will come.”

The Giro, more so than the other Grand Tours, seems to favour unpredictable results. Last year it was Cannondale-Garmin youngster Davide Formolo who took a stunning solo victory on stage 4 having attacked from the breakaway and managing to hold on for his first professional victory.

Earlier this week it was Formolo’s compatriot Giulio Ciccone who achieved a similar feat when he won solo on stage 10, also after attacking from the breakaway. It was a big win for Ciccone’s wildcard Bardiani-CSF team (they won stage 10 last year too, with Nicola Boem’s unlikely breakaway win) and an even bigger win for Ciccone himself. In hindsight we can see he’s had some good form this season. The 21-year-old came into the Giro with three top-five places this year, including fourth on a tough stage of the Giro del Trentino. But winning at the Giro d’Italia is the perfect way to step things up and the ultimate way for an Italian to chalk up their first professional victory.

Sure, Ciccone had a little bit of help in escaping from the breakaway thanks to this (deliberate?) blocking manoeuvre from teammate Stefano Pirazzi. But Ciccone rode very strongly to be in the break, to be in position to go when he did, and to hold off the chasers in the closing kilometres.

It is unpredictable victories like these that keep the sport so interesting.

The time trials have also delivered their fair share of surprises

And speaking of unpredictable results at this year’s Giro, how good have the time trials been? Sure, Tom Dumoulin (Giant-Alpecin) was the favourite for stage 1 and he won it, but even that stage delivered its own measure of surprise.

As we wrote last week, Primoz Roglic’s second-place on that opening day was an exciting result; his win on stage 9 even more so. And the third and final individual time trial, Sunday’s stage 15 all-uphill effort, delivered an even more surprising result again. Few, if any, would have picked Alexander Foliforov (Gazprom-RusVelo) to beat the likes of Vincenzo Nibali (Astana) and Alejandro Valverde (Movistar) in an uphill time trial, and yet that’s just what he did.

It’s fair to say the result has raised some eyebrows, given past indiscretions from those within the RusVelo setup, but for now Foliforov’s win should be taken on face value: as an impressive ride that made Sunday’s time trial even more exciting than it already would have been.

When the wildcard teams were announced for this year’s Giro d’Italia, more than a few people expressed surprise at the inclusion of Gazprom-RusVelo. The Russian team’s invitation came at the expense of other Pro Continental teams — not least the Italian Androni-Sidermec squad — and on paper, the team’s performances hadn’t warranted the invite.

In the end though, Gazprom-Rusvelo has done enough to justify its inclusion in the race. The team’s blue-clad riders have been a common sight in the Giro’s breakaways and then, of course, there was the team’s stage 15 performance. Not only did Foliforov win the stage, but Sergey Firsanov was fourth, beating many of the big-name time trialists and GC threats, even after being blocked by the Tinkoff teamcar during his effort.

Going into the race, we suggested that the winner of the 2016 Giro d’Italia would be one of four riders: Vincenzo Nibali, Alejandro Valverde, Mikel Landa (Sky) or Rigoberto Uran (Cannondale). While that could still happen, it’s looking less and less likely.

Mikel Landa went home sick on stage 10; Rigoberto Uran is now more than eight minutes down; Valverde, while ‘only’ 3:29 off the pace, hasn’t been able to match it with the frontrunners; and Vincenzo Nibali seems a little off his best too, and currently sits 2:51 off the lead.

Instead, the 2016 Giro d’Italia has belonged to the second-tier GC threats. More specifically, it’s belonged to Esteban Chaves (Orica-GreenEdge) and Steven Kruijswijk (LottoNL-Jumbo). Chaves showed in the Vuelta a Espana last year (where he was fifth and won two stages) that he’ll be a genuine Grand Tour contender in the next few years, but that progression seems to have happened even quicker than most expected. He’s improved his time-trialling and is outclimbing just about everyone in the race. He also has a stage win to his name.

And as for Steven Kruijswijk, he’s improved considerably as well. He was Mr Breakaway at last year’s Giro, taking two second places, seven top-six finishes, and seventh overall. This year’s he has stepped up in a big way and, after 15 days of racing, he looks to be the rider to beat …

Steven Kruijswijk could be on his way to making Giro history

While most of the GC threats rocked and rolled their way up the Alpe de Suisi in Sunday’s time trial, Steven Kruijswijk, clad in pink, was another sight entirely. He looked comfortable, composed and in control, and was less than a second off winning the stage. The 28-year-old also seems unperturbed by the weight of expectation — “There’s no extra pressure, there’s only pressure from myself”, he said after defending his overall lead on stage 15. For Kruijswijk not to win, based on current form, Chaves and/or Nibali will have to ride out of their skin in the next five stages and the Dutchman will either have to crash or fade dramatically.

Of course, such a turnaround certainly isn’t out of the question. On the final rest day of the 2014 Giro d’Italia, Rigoberto Uran was leading the race, 2:40 ahead of Nairo Quintana (with Cadel Evans, Rafal Majka and Fabio Aru in between). Quintana went on to win the race by almost three minutes ahead of Uran — a nearly six-minute turnaround in five stages.

Just about anything can happen in the last week of a Grand Tour.