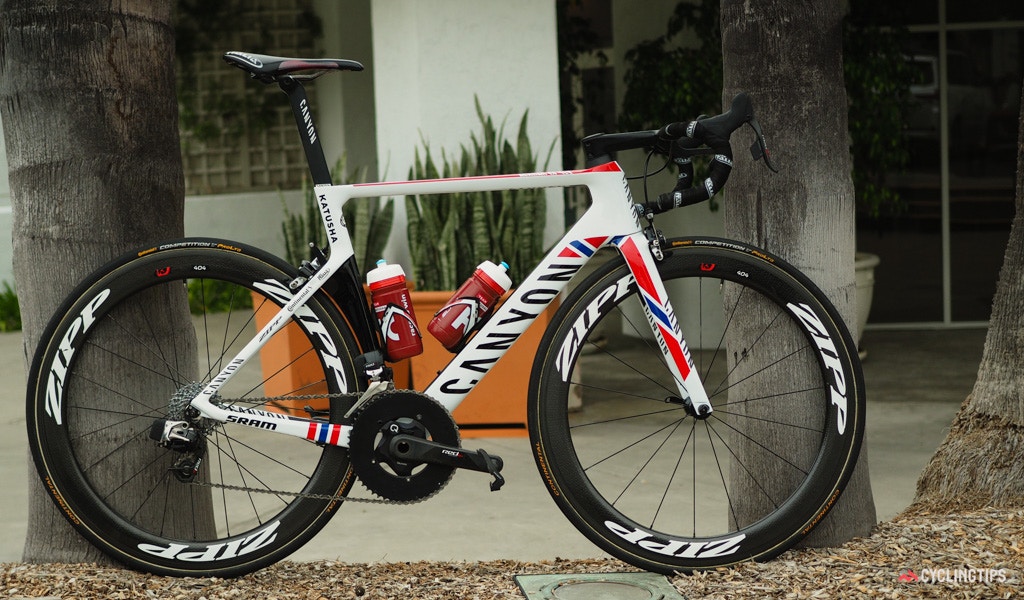 Team Katusha sprinter and one-day specialist Alexander Kristoff stormed to victory in stage 7 of this year’s Amgen Tour of California, just edging out Peter Sagan as the race arrived in Santa Rosa. US tech editor James Huang took a look at the Canyon Aeroad CF SLX that took him to the line.

Canyon has a long history of providing its top sponsored WorldTour riders with national-themed rides and it’s gotten quite good at doing so with both style and grace. You could be forgiven for thinking that’s a Union Jack painted on Kristoff’s custom painted Canyon but that red, white, and blue are actually the colors of the Norwegian flag just turned at an angle — and although fellow Scandinavian Edvald Boasson Hagen is that country’s current national champion, Kristoff has held the title twice (2011 and 2007).

It’s little surprise that Kristoff has chosen Canyon’s aero-minded Aeroad CF SLX option over the more all-purpose Ultimate CF SLX. The truncated-airfoil tube shapes’ additional surface area may be heavier than the Ultimate but at the higher speeds that are so critical to Kristoff’s success, the reduced drag likely pays bigger dividends on the results sheet.

Nevertheless, the current-generation Aeroad is stouter than its predecessor, and certainly well suited to sprint duties. The U-shaped down tube is deep but broad, the chainstays are reassuringly stout, and the compact rear end is less apt to wag than before. Naturally, Canyon says Kristoff’s Aeroad CF SLX records lower drag figures in the wind tunnel than the original version, too — especially when combined with the sleek new Canyon H11 Aerocockpit integrated front end.

Canyon makes its own Garmin computer mount for the Aerocockpit integrated bars.

Further cleaning things up is the SRAM Red eTap electronic group, whose wireless design leaves no cabling dangling out in the wind. Kristoff has his levers mounted high on the traditional-bend, deep-drop bars, but since you can actuate the shift paddles with your knuckles, there’s no need for supplemental ‘sprint’ shifters as are often found on Shimano Di2-equipped bikes. A matching SRAM Red Quarq crankset records Kristoff’s power numbers while the standard outer chainring has been swapped for a solid, non-cutout version to better resist flex under load.

Other SRAM-supplied bits include the standard PressFit GXP bottom bracket, a conventional stamped steel PG-1170 cassette instead of the machined Red unit, and Zipp 404 Firecrest carbon tubular wheels — which were replaced during the race with ones that were finished to match the frame and fork. SRAM may be Katusha’s official component sponsor but the Aeroad uses direct-mount rim brake calipers — and as yet, the Chicago company doesn’t make anything to suit. Katusha mechanics leave the stock Shimano Dura-Ace calipers in place but strip them of their identifying badges. Alexander Kristoff stormed to victory at stage 7 of the 2016 Amgen Tour of California aboard this custom painted Canyon Aeroad CF SLX.