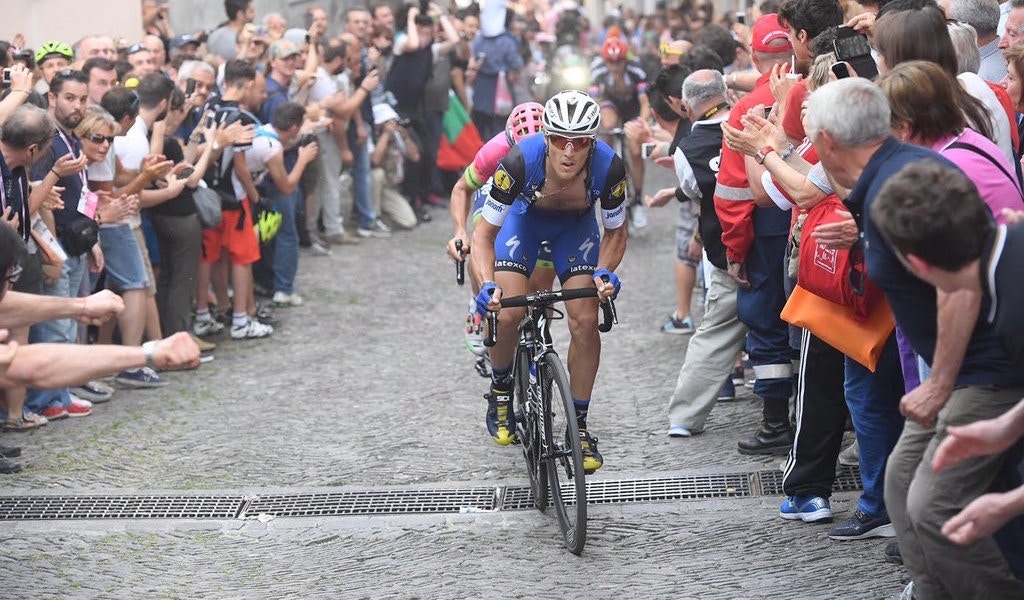 It was a battle among the Italians at the Giro d’Italia Thursday, as Matteo Trentin (Etixx-QuickStep) sprinted to victory over Moreno Moser (Cannondale) and Etixx teammate Gianluca Brambilla, with an early breakaway finally making it all the way to the finish at this year’s race.

Race leader Steven Kruijswijk (LottoNL-Jumbo) finished safely in the peloton 13:24 behind and kept hold of the maglia rosa as the stage completed without any changes in the general classification.

A tough Category 2 climb on the final circuit around Pinerolo split up the breakaway with Moser and Brambilla riding over the top together followed by Nikias Arndt (Giant-Alpecin) and Ivan Rovny (Tinkoff) 28 seconds behind.

Sacha Modolo and Trentin joined Rovny and Arndt on the descent with Trentin not helping in the chase due to having a teammate in the lead.

Inside the final kilometer, Trentin attacked the chase group, as Moser led Brambilla with the former maglia rosa refusing to pull. When Moser slowed the pace, Trentin was suddenly upon the leaders as the riders entered the 350-metre finishing straight.

Trentin launched his sprint immediately upon making the junction, and comfortably won the stage. It was the fourth stage win of this Giro for Etixx, following two from Marcel Kittel, and one from Brambilla, at a race that has seen Kittel, Brambilla, and Bob Jungels all spend time in the leader’s jersey.

“It’s beautiful! Really beautiful!” Trentin said. “In the classics I was in great shape but I had some back luck, so I came to the Giro with the goal of winning at least a stage. I started off working for Marcel [Kittel], and then for Gianluca Brambilla and Bob Jungels. Today it all went perfectly. Brambilla is a climber so he went away uphill and I was behind with three guys pulling for me, until I came across by myself at the very end.”

The sun shone on the riders at the early start in Muggio, as the peloton set off for Pinerolo a staggering 244 kilometers away. The longest stage of the 99th Giro d’Italia looked to be a chance for the breakaway.

After a quick start, the breakaway escaped 16 kilometers into the stage and the thoughts of many were confirmed, this one would be going the distance. 15 teams among 24 riders were represented in the lead group.

With Brambilla the best-placed rider on the general classification at nearly an hour behind, the peloton was content to let the leaders gain a hefty advantage. The gap went out to nearly 14 minutes before the team of the maglia rosa, LottoNL-Jumbo, came to the front to keep the gap sensible.

Kung hit the deck with around 50 kilometers to the finish, but got back up and was able to rejoin his breakaway companions.

As the breakaway entered Pinerolo for the first time, they brought back Pavel who had chose to go alone, but the Tinkoff rider never gained an advantage of more than 20 seconds. The group was able to get glimpse of the run-in to the finish and the cobbled San Maurizio climb, which at only 450 meters is quite short, but has a maximum gradient of 20%.

Across the finish line for the first time with less than 30 kilometers to go the breakaway still held a double-digit lead over the peloton, which was still being lead by LottoNL-Jumbo.

The Category 2 Pramartino climb wasn’t particularly long, at only 4.6 kilometers, but was steep with over a 10% average gradient. Navadauskas drove on the front of the group in an attempt to set up Moser. His high pace quickly began to whittle down the group.

Rovny was the first to attack with Brambilla and Moser the only ones to follow his wheel. He was soon dropped as the gradient steepened ever more.

Over the top of the climb the duo held nearly a half-minute over Ardnt, who had joined Rovny in chasing the leaders.

The technical twisting decent favored riders with good bike handling skills of which both the leaders possess, judging by their performances at the Italian classic Strade Bianche, held on the white roads of Tuscany. Brambilla finished third this year, and Moser is a former winner.

Modolo and Trentin joined Rovny and Ardnt on the decent, with the Etixx-QuickStep rider refusing to participate in the chasing with a teammate up the road.

Back into town the leading duo were together as they tackled the San Maurizio climb for the second and final time. Moser accelerated at the bottom, but was unable to detach Brambilla who then himself attacked, but Moser followed looking calm and collected.

Moser was forced to lead the final kilometer, as Trentin attacked the break. Remarkably the Italian made the junction to the leaders in the finishing and blew right past to take the win. Brambilla finished third, but raised his hands in the air celebrating his teammate’s win.

While the peloton thinned on the Pramartino climb, the attacks from the contenders that were expected never came, and the general classification riders finished all together, 13:24 behind the winner, led over the line by Alejandro Valverde (Movistar).

“I felt really good today,” Kruijswijk said. “It was a long stage but I didn’t see much of the rest of the peloton because my team kept me protected and safe all the time. Only the last climb did I have to do it by myself, although I was never in trouble. I’m getting closer every day to winning the Giro. Tomorrow it looks like a good stage for me. I like long climbs. Maybe I can do something. After finishing second three times, I’d like a stage win as well, but firstly I’ll defend the maglia rosa”.

Fireworks are expected Friday with the peloton tackling the Cima Coppi, the highest point of this year’s Giro d’Italia before a finish in France at the ski resort in Risoul.