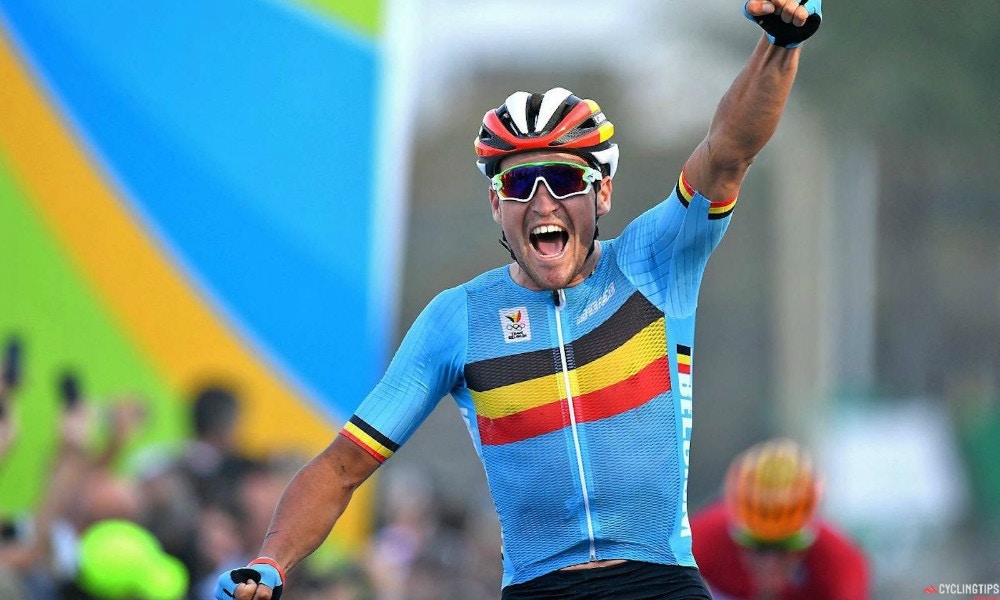 Belgian Greg Van Avermaet is the 2016 Olympic road champion, winning a three-up sprint after a dramatic race marred by several crashes on the technical descent of the Vista Chinesa climb.

The day’s biggest losers were Vincenzo Nibali (Italy) and Sergio Henao (Colombia), who crashed out of a lead group of three on the final descent that saw Majka go clear. What had looked to be sure medals for all three turned into bronze for Majka, and injuries for Nibali and Henao.

Australia’s Richie Porte also found himself on the deck, crashing one lap earlier in the same place. This destroyed his own chances of a medal.

The final result was a dream scenario for Van Avermaet, who won a stage and spent three days in the maillot jaune at the Tour de France last month; redeeming his season after crashing out of the Tour of Flanders in April with a broken collarbone.

“It was a pretty crazy race, a hard one; and the descent was pretty technical,” he said afterwards. “All the guys took risks. I was in good position and never really went over my limit. On the descent I saw a lot of guys lying on the ground. I was counting them.

“I was a little confused how many were left on the front. Me and Fulsang went for it and tried to catch him. For me the last five to six kilometres everything went perfect.”

Prior to the race he was seen very much as an outsider, with the tough climbs appearing to pitch the race at those more at home in the high mountains. He admitted that he was also skeptical.

“I didn’t think it either,” he said, talking about his chances. “I just went early to anticipate the others and felt really strong. I knew I just had to hang on and hope for a sprint, and that’s how it went.

“For me, winning an Olympic title is something really big! I never expected this.” A total of 144 riders from 61 nations rolled out at the start at Fort Copacabana in hot and humid conditions, with temperatures soaring above 33°C (91°F).

The finish line was located 8.6km from the bottom of the Vista Chinesa descent.

Like a world championship event, the Olympic road race was competed by national teams, rather than trade teams, and without race radios.

Unlike a world championship event, team sizes varied, from a maximum of five riders per team, for top nations like Great Britain, Belgium, Italy, Colombia, and Spain, to just one rider per nation for many other nations.

Some nations, but not all, were supported by follow vehicles; other nations shared a support vehicle.

The first rider to abandon was Dutch rider Tom Dumoulin, who broke his wrist in the final week of the Tour de France. A favorite for a medal in Wednesday’s time trial, Dumoulin — like all time-trial riders — was required to start the road race to compete in the time trial, but abandoned inside the first 14km.

Pantano, a stage winner at the Tour de France, was a late call up into Colombian team after Nairo Quintana decided to rest after the Tour and focus on the Vuelta a España.

With 200km to go, the breakaway’s lead had opened to eight minutes as the leaders hit the Grumari circuit for the first time.

A crash on a rough cobblestone section with 195km remaining saw Turkey’s Ahmet Örken hit the ground, while several riders were forced to go off road to avoid the fallen rider. The rough cobblestones also appeared to cause a mechanical issue for Richie Porte (Australia).

As the race completed its first lap of the difficult Grumari circuit, the gap had come down to 5:30 with 175km to go.

On the second of four laps of the Grumari circuit, several riders in the main peloton had mechanical issues on the cobbled section through the Grumari Nature Park, as bottles and chains dropped. Among them were Bauke Mollema (Netherlands), Greg Van Avermaet (Belgium), and Nicolas Roche (Ireland).

Up ahead in the breakaway, Bystrom was forced to take a bike change due to a slipping seat post while Mollema worked out his bike issues, first taking a new wheel, and then a bike swap.

With 158km to go, Fabian Cancellara was also spotted riding through the caravan, having taken on new water bottles. Shortly after, Mollema pulled over to swap back onto his original bike.

With 152km remaining, the gap from the leaders to the main peloton had stabilized to five minutes as riders from Spain, Italy, Great Britain, and Australia manned the front of the pack.

At 130km to go, the gap had steadied at 4:30. Fabio Aru (Italy) punctured and took a quick wheel change as the race entered the fourth and final lap of the Grumari circuit.

Across the cobblestones one last time, Porte again dropped his chain, with teammate Simon Clarke dropping back to help him chase back. With Zdenek Stybar (Czech Republic) hammering on the front, the bunch split into several groups across the cobbles.

Some of the names in the front group: Cancellara; Froome, Geraint Thomas, and Steve Cummings (Great Britain); Rafal Majka (Poland); and Taylor Phinney and Brent Bookwalter (USA). However the main peloton would reform before completing the final Grumari circuit with a last ascent of the Grota Funda climb, where Poels and Tim Wellens (Belgium) were put into difficulty.

As the race exited the Grumari circuits, the gap to the six leaders had dropped to under two minutes with 100km to go, and Froome took what looked to be a planned bike change, with Thomas dropping back to aid him.

ON TO THE VISTA CHINESA CIRCUIT

With 90km to go, Kwiatkowski, Pantano, Geschke, Albasini, Bystrom and Kochetkov held a lead of just over two minutes as the race approached the first of three Vista Chinesa circuits, with its 8.9 km climb at an average gradient of 6.2%.

At 77km to go, the gap held at 2:10,and Bystrom was first to drop off the breakaway. Shortly after, Albasini lost contact, and the front group was down to four.

Behind, Great Britain, Spain, and Italy rode at the front of the peloton, and again Poels was in difficulty. With Steve Cummings setting a hard tempo on the front, Warren Barguil (France) was also dropped.

At the front, Pantano was next from the breakaway to struggle on the Vista Chinesa climb, while Cummings swung off, his work for the day done. With Italy taking over the chase, Phinney was dropped, followed by Edvald Boasson Hagen (Norway) and Philippe Gilbert (Belgium).

With 73km left, Geschke was next to drop out of the breakaway, leaving just Kwiatkowski and Kochetkov at about a minute to the bunch.

Italy’s Damiano Caruso jumped away from the bunch, and was followed by Van Avaermaet and Thomas. Missing the move, Spain led the chase, while Rein Taaramae (Estonia), and then Sergio Henao (Colombia) bridged up to the chasing trio.

With 69km remaining, Kwiatkowski and Kochetkov held a 47-second lead over Henao, Taaramae, Geschke, Caruso, Van Avermaet and Thomas, and 1:01 over the main peloton as the leaders made their way down the technical descent of the Vista Chinesa climb.

Meanwhile, at the finish line, a bomb quad exploded a suspicious bag, causing a bit of commotion and concern.

Then, inside 50km to go, Kwiatkowski and Kochetkov hit the Canoas climb, the first of two climbs on the Vista Chinesa circuit, holding a scant 25-second lead over the five-man chase group.

Kwiatkowski went solo on the second time over the Vista Chinesa climb, while Andrey Zeits (Kazakhstan) bridged across the first chase group, which caught Kwiatkowski and became the leaders on the road.

With Taaramae dropped, the lead group of Caruso, Henao, Kwiatkowski, Thomas, Van Avermaet, and Zeits held a 30-second lead over a dwindling peloton with three British riders — Froome, Adam Yates, and Ian Stannard — on the front. The pace was such at Colombia’s Rigoberto Uran abandoned.

The next move on the second trip over the Vista Chinesa climb came from Jakob Fuglsang (Denmark), drawing out Aru.

On the technical descent, Portugal’s Nelson Oliviera crashed, and though he wasn’t seriously hurt, his race was over.

Next to crash was Porte, and his crash was much heavier, as the Australian held his shoulder, his race also over.

Nibali and Aru came to the front on the descent, as the breakaway group was caught. It would all come down to the final circuit.

Missing the split: Valverde and Rodriguez (Spain), plus Froome.

The 11 leaders held a 50-second lead with 32km to go, with Cancellara and Valverde driving the chase. However with only Caruso committed, the gap came down, and was just 38 seconds at 23km to go.

Behind, Tanel Kangert (Estonia) attempted to bridge across with Rodriguez and Louis Meintjes (South Africa).

Further Valverde was put into difficulty in the second chase group as Froome jumped, hoping to bridge to the three chasers, and then the front group.

Rodriguez and Meintjes chased, and further back, Yates, Froome, and Julian Alaphilippe (France) worked to get across.

Over the top of the final ascent of the Vista Chinesa climb, Nibali attacked again, bringing Henao and Majka with him; one last descent remained, followed by a 9km flat run-in to the finsh. While all three riders were guaranteed a medal if they stayed clear, Majka refused to work. On the descent, their advantage was just 13 seconds ahead of a chase group.

On the descent, Nibali and Henao crashed heavily, hitting the ground on the same hairpin where Porte crashed one lap earlier.

A few moments later, Thomas also crashed out of the chase group. Van Avermaet, Alaphilippe, Rodriguez, Fuglsang, Meintjes, Aru, and Zeits were also in that group but stayed upright.

Majka continued to pummel the pedals, trying to hold on for gold. With seven kilometres remaining he held a 25-second lead as the chase group failed to cooperate; the Polish rider looked to have the win wrapped up.

But with 5km to go and the gap down to 13 seconds, Van Avermaet and Fuglsang jumped, and agreed to work together, knowing they would medal if they stayed clear.

The chasing duo then caught Majka with 1400 metres remaining, and as Van Avermaet opened up the sprint, Majka sat up, knowing he could not compete in the sprint. The Belgian powered in to win, with Fuglsang taking second and a shattered Majka netting third.

“We were three so everyone has a medal,” said Van Avermaet afterwards. “But for me I was the fastest guy. It’s still a little bit stressful because you have to still finish it off but I was pretty sure I could make it good in a sprint.”

He did, and that earned him his biggest-ever career victory.