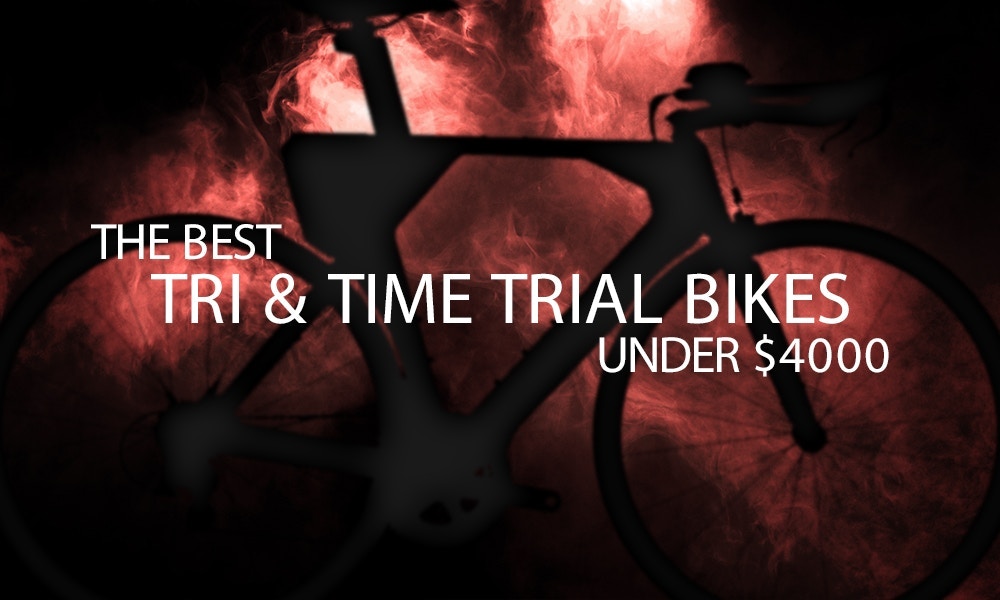 Built for speed and efficiency, we’ve scoured the current crop of triathlon and time trial bikes to come up with what we deem the best for $4,000 or thereabouts.

Triathlon and time trial bikes are all about aerodynamics and integration with many boasting impressive wind tunnel test numbers to back up their aerodynamic claims. The aim of a triathlon bike is to reduce the bike and its rider’s drag, making you more effective against the wind and the clock. This is done by manipulating tube profiles, integrating storage, cables and brakes, and looking at the bike from a bigger picture, keeping the rider and functionality in mind at all times.

This is where traditional time trial (TT) bikes differ from triathlon bikes. Time trial bikes place the rider in a more aggressive, long and low position. As the distance covered is generally shorter than triathlon distances, there's no need to consider storage and riders don't need to concern themselves with running long distances off the bike. Triathlete's on the other hand, often spend long periods of time on the bike, feeding constantly and endeavoring to save as much energy as possible for the impending run.

So whether you’re looking to race against the clock for an hour or be first to the run, consider this a short-list of the bikes we’d put our own money on (in no particular order).

Time trial and triathlon bikes are generally far heavier than their traditional road racing brothers. With a focus on maximizing aerodynamics over weight savings, it's common for top-tier triathlon bikes to weigh upwards of 8kg, with most of the bikes we've listed here being heavier again.

At $4,000, Shimano 11-speed 105 componentry should be expected as a minimum, more than likely outfitted with a 'mid-compact' 52/36 crankset to keep speeds higher. Wheelsets are a key point of consideration for time trial and triathlon bikes, with many of the bikes at this price point coming equipped with a more basic training wheelset. The general expectation is to buy a higher-end race wheelset to get the most out of the bike on race day.

If you are considering spending more and curious as to what you'll get, greater integration for hydration and storage is a feature of top-tier bikes, as is electronic shifting that enables you to shift from the bar extensions as well as the handlebars, and of course, upgraded deep profile wheelsets that reduce drag and improve aerodynamics.

All the bikes listed below are great value options and provide everything you could want for short or long distance triathlons and club-based time trials. 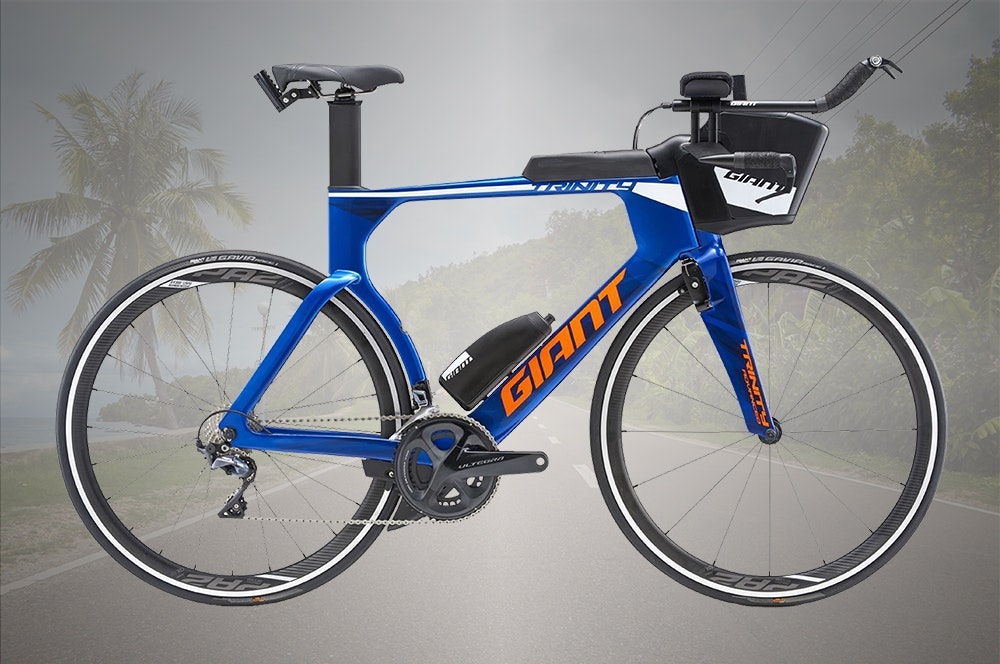 The Trinity Advanced Pro 2 has all the hallmark features of what to expect from a triathlon bike, featuring integrated storage and hydration, hidden brakes and aerodynamic tube profiles. The Advanced Pro 2 provides much of the same technology and features of the top Advanced Pro 0 and 1, without the upgraded groupset.

Giant have been able to offer a remarkable package by fitting this bike with an in-house tubeless wheelset, 11-speed Shimano Ultegra and almost equal levels of integration as the higher models. Giant's 'AeroVault' system, for hydration and storage, is immediately evident with one look at the front of the bike. The system was engineered with the frame to act as a complete unit and is said to improve aerodynamic performance compared to a standard set-up. 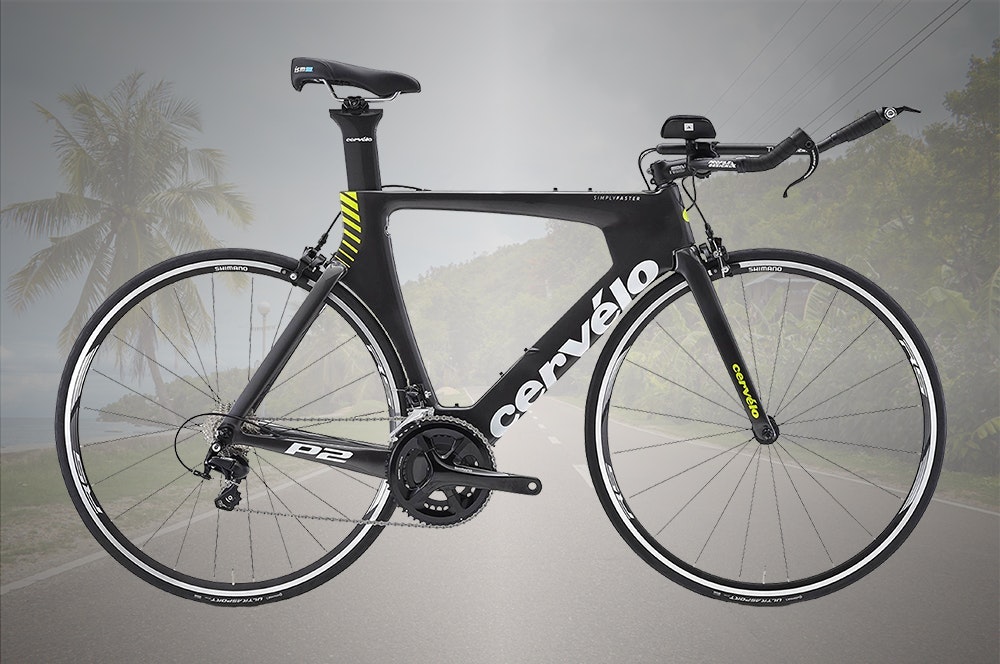 Cervelo is the King of Kona. You couldn't ask for a better endorsement for a triathlon bike than the bike count at the Ironman World Championships in Kona. In 2017, Cervelo won the Kona bike count for a record 13th consecutive year. Perhaps even more amazing, Cervelo's total count nearly matched that of the next three brands combined.

The Cervelo P2 shares the same frame and fork as the P3 and is exceptionally functional. The design is rider friendly and is one of the few bikes on this list to have the rear brake above the seatstays and not underneath the bike. The front brake is also in a standard road bike position making mechanical adjustments easy, as well as swapping over brake pads for those race-day carbon wheels. The seatstays are designed to improve airflow over the brake calipers without compromising functionality, the seat tube has a partial cut-out and the downtube is dropped slightly to improve aerodynamics and reduce drag.

The finishing of the bike is equal to that of other bikes on this list with an 11-speed Shimano 105 drivetrain and basic wheels, but it does stand above many others with a huge size range comprising of seven options from 45cm to 61cm. 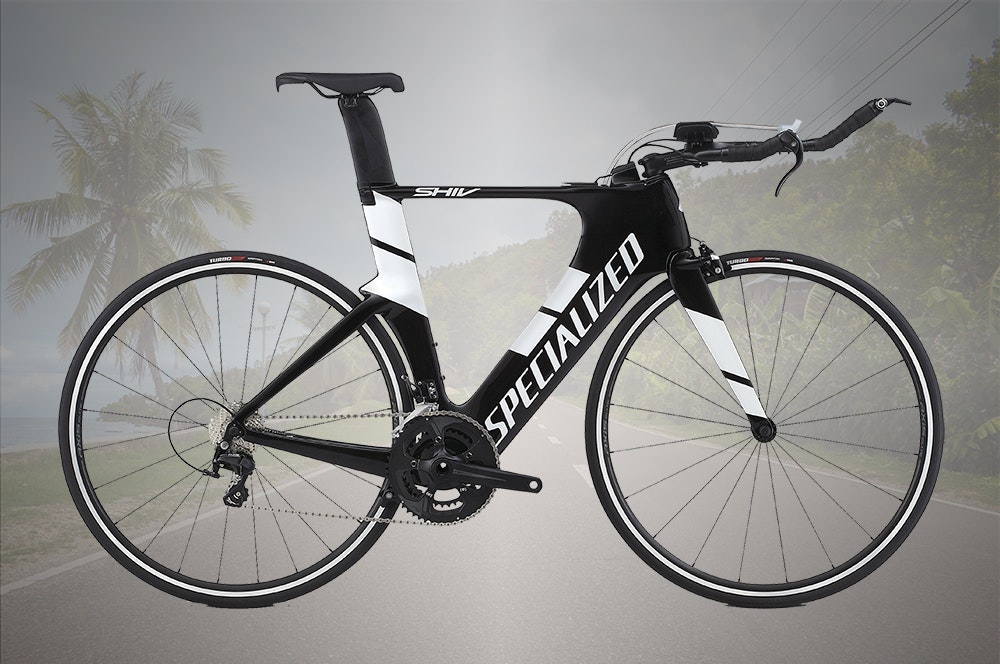 Specialized is one of the few brands to separate it's time trial and triathlon bikes, creating the Shiv Elite specifically for triathlon with integrated storage and hydration systems. The triathlon version of the Specialized Shiv is distinctive by its massive downtube that houses the 'Fuelselage Integrated Hydration System', a bladder that slides into the downtube and carries 500ml of fluid, depending on frame size. Not only is it a neat storage solution, it's hidden from the wind.

The drivetrain is 11-speed Shimano 105 with the exception of a Praxis Works crankset in a mid-compact (52/36T) ratio.

For Specialized fans wanting to know about other options, there are a number of complete bike model available, with the Specialized Shiv Expert and S-Works Shiv frameset available separately. Opting for the S-Works frame provides an upgraded carbon lay-up, ceramic bottom bracket bearings, and additional storage between the downtube and seat tube as standard.

BMC have created an all-new dedicated triathlon bike following "four years of studying the needs of multi-sport athletes" that incorporates aerodynamic tube profiles, multiple storage options and an easily adjustable cockpit set-up. The frame features BMC's 'SubA' aerodynamic tube profile design but the real winner is the additional integrated storage with a rear-mount equipment storage box that seamlessly integrates to the frame and mounts on the toptube for fuel boxes.

Shimano provides all the componentry for the Timemachine 02; 11-speed 105 Shimano is the drivetrain with a mid-compact ratio, direct mount 105 brakes front and rear and a basic Shimano RS010 wheelset. Beyond the heavy training wheels, the other potential drawback from this great package is the limited size range of only four options; small, medium-small, medium-large and a large. 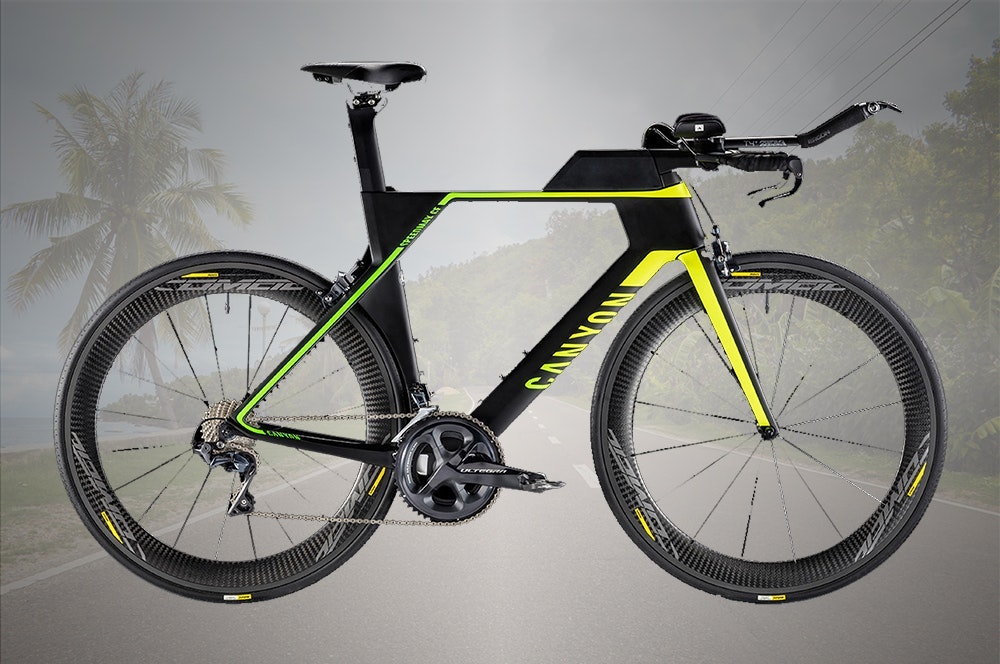 Direct-to-consumer brand Canyon are no strangers to producing race-ready bikes packed with value. The Speedmax CF 8.0 is equipped with arguably the most impressive component specification of all the bikes on this list. Shifting comes courtesy of a full Shimano Ultegra mechanical groupset, Mavic provides the wheelset with its Comete Pro Carbon Exalith hoops shod with tubeless ready Mavic tyres. A TT specific Fizik Mistica saddle and Profile Design extension bars finish off this value-packed, wind-cheating steed.

However, it is worth noting that time trial bikes are some of the most technically demanding, and having a professional fit is extremely valuable. Be sure to factor both of these elements into your buying decision. 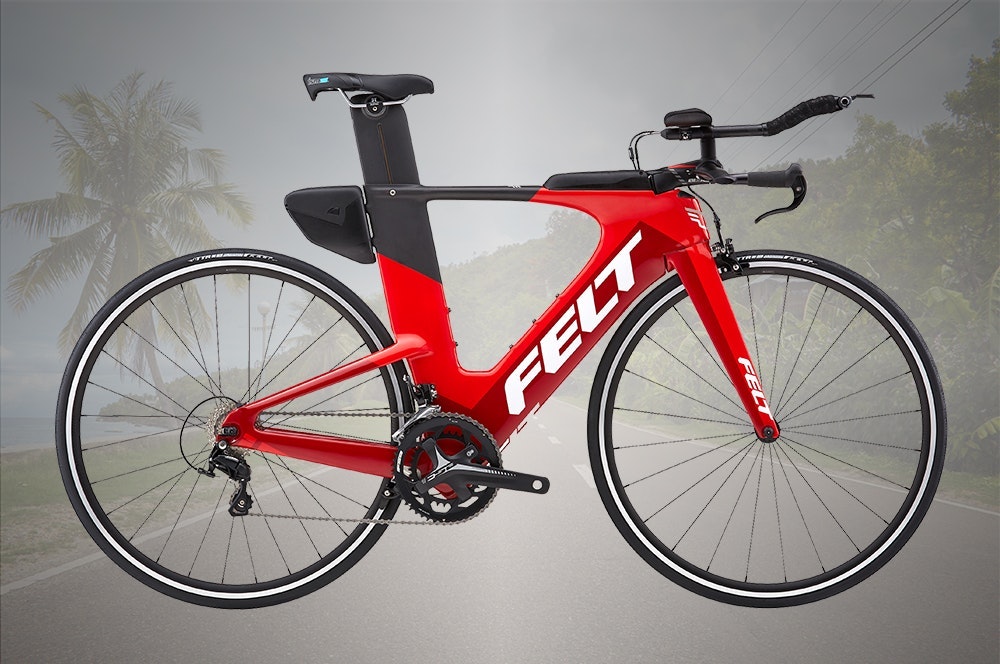 American company Felt continue to push the boundaries of what's possible for a triathlon specific bike with the 'IA' series. Featuring a frame profile that’s unashamedly aero, the enormous downtube slices through the wind whilst the seatstays have also been aggressively dropped, reducing the amount of surface area that touches the wind and improving overall aerodynamics.

The IA '16' features much of the same technology of the top-tier options, mirroring the unique frame shape albeit without the front end integration which means the front brake is exposed to the wind. As we've mentioned previously, this could be seen as a positive in terms of functionality and ease of use by riders. The drivetrain is Shimano's 11-speed 105 with a traditional compact crankset of 50/34 paired with an 11-28 cassette that should provide plenty of range to conquer hillier courses. 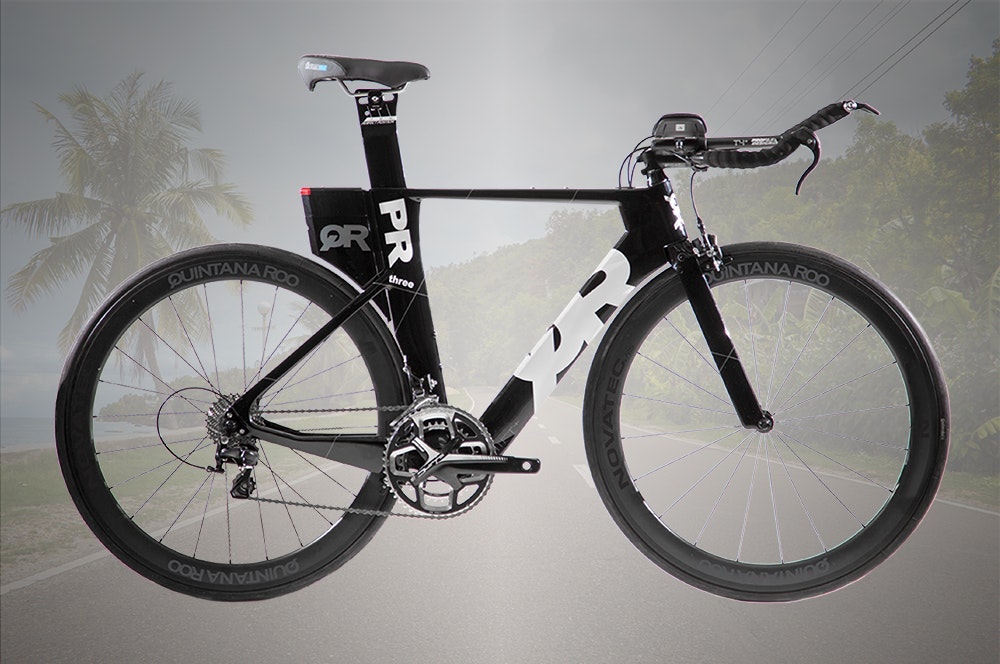 American company Quintana Roo has been specializing in triathlon-specific bikes since its inception in 1987. The PRThree represents the company’s entry level offering and is available in two different build kits. The front brake sits in the wind, however, is much more adjustable than integrated options featured on more premium bikes in the American company’s line up. The rear brake is tucked away underneath the chainstays (at the rear), and the only cables in sight are seen only briefly at the front of the bike before entering the toptube. The frame moulds around the rear wheel that further adds to the stylish and slippery design.

The drivetrain comes courtesy of Shimano in the form if its 105 group with a pretty standard mid-compact 52/36 crankset and 11-28 cassette on the rear. Buyers have their choice of wheelset, with Shimano’s robust RS010 alloy clinchers fitted as standard whilst a Novatec 50mm deep carbon clincher wheelset can be optioned for an additional fee.

Seeking some more clarification on the differences between a triathlon and a time trial bike? Our ultimate guide to buying a triathlon bike has all you need to know to differentiate the two 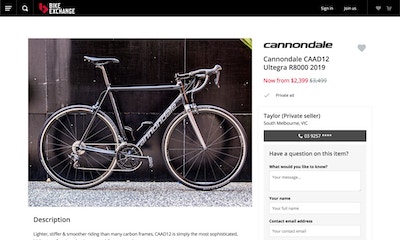 Selling a Used Bike Online: What to Know

We walk you through the process of selling your bike online including some tips and tricks to maximise the value of your pre-loved bicycle...