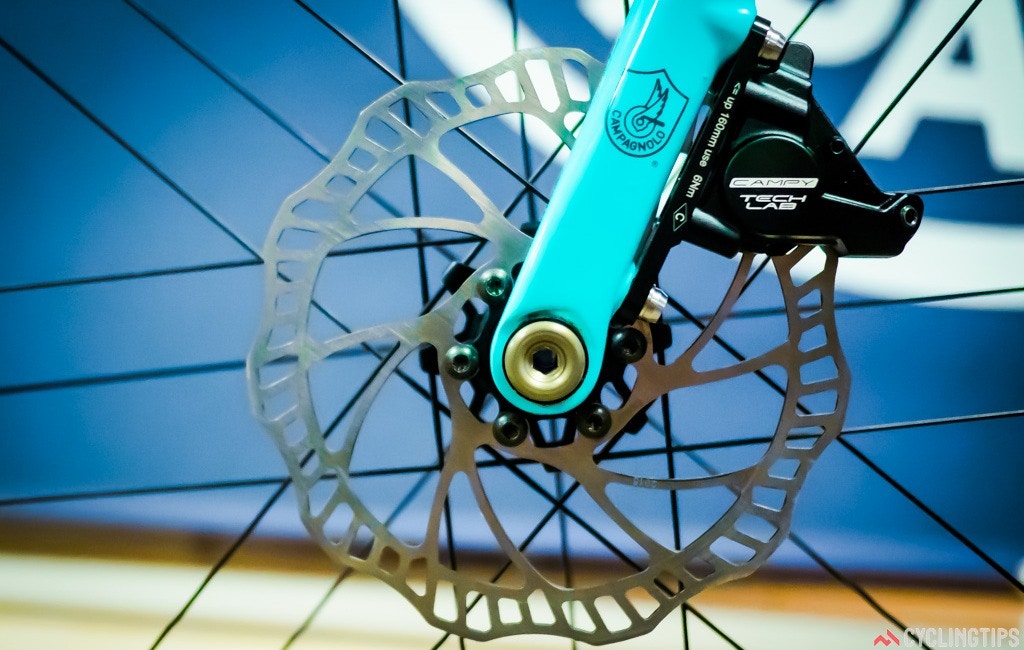 As representatives from the cycling media gathered in Gran Canaria for Campagnolo’s recent press camp, many were anticipating an announcement about a disc brake system. It came, but only on the last day with a brief peek at the prototypes that will be used by Movistar, Lotto-Soudal, and Astana for the upcoming Spring Classics.

Campagnolo was prepared to put its prototypes on display but the company refused to share any details on the project. Instead, Joshua Riddle, Campagnolo’s press manager, led the audience through the company’s prototype development process, which is largely handled by Campy Tech Lab.

Comprising some 50 staff, Campy Tech Lab is a special task force that exists within the company’s R&D department. The team works directly with Campagnolo’s sponsored teams and uses professional racing as its “most extreme testing ground” for its prototypes.

All of Campagnolo’s disc brake prototypes will wear the Campy Tech Lab logo during the coming season, just like the EPS prototypes that started appearing in the peloton in 2011. According to Riddle, it’s an important distinction because the company is not prepared to put its name to any product until it is satisfied with its performance and safety.

While Riddle refused to provide any details on the disc brake project, Lorenzo Taxis, Campagnolo’s director of marketing and communications, was happy to admit that the company was a latecomer to disc brake development. He explained that the company was in no hurry to launch a product and will devote the coming year to rigorously testing the safety and reliability of its prototypes. Campagnolo may be trailing SRAM and Shimano at this stage but its prototypes already cater for every hydraulic road disc option. Thus, the bikes on display — a Specialized Tarmac, Ridley Fenix and a custom Sarto — sported hydraulic post- or flat-mount callipers in conjunction with mechanical and electronic groupsets.

Campagnolo is also well on its way to developing disc-equipped racing wheelsets. All of the bikes on display were fitted with 50mm carbon clinchers bearing Campy Test Lab’s logo. In every instance, the wheelsets had composite front hubs and alloy rear hubs and were fitted with 140mm or 160mm rotors with standard quick-release axles or thru-axles.

A closer look at the callipers showed that the company is using a two-piston design at this stage with no special measures for increasing heat dissipation. The pronounced protuberance at the points of the hoods suggests that the master cylinder is housed in the lever while the rotors all appeared to be cut from steel. Campagnolo is ready with hydraulic disc brake callipers to suit post- and flat-mounts fittings. This Sarto frameset favours the latter, front and rear.

Questions on the nature of the brake fluid were met with silence and we weren’t allowed to peel back the hoods to examine the lever more closely. As such, it’s too early to say whether Campagnolo has developed any innovations for its road disc system.

The company wasn’t offering test rides on the bikes but flicking the levers revealed that the action was as light as can be expected for a hydraulic system. Campagnolo has managed to preserve the ergonomics of the lever body though it’s unclear what kind of impact the extra protuberance at the points will have on comfort.

The disc brake project will remain in the hands of the Campy Tech Lab for the duration of race testing, then all prototypes (including wheels) will be returned for inspection, further testing and then destruction. From there, Campagnolo will continue with internal testing and validation as it slowly works towards signing off on the project for production, assigning it “Campagnolo Corretto” in readiness for final branding. The extra length at the points of the hoods suggests that Campagnolo has elected to house the master cylinder in the lever body. The bikes on display were fitted with both mechanical and electronic groupsets with the new disc brakes. Shown here is the disc-ready EPS ergolever. Campagnolo has embraced both mounting formats for its early disc brake calliper prototypes. This is the flat-mount version. All of Campagnolo’s rotors appeared to be cut from steel with no special measures for heat dissipation. Post-mount calliper fitted to the forks of a Specialised Tarmac. It’s clear that Campagnolo is using a two-piston design for their disc callipers. All of the prototype wheelsets had composite front hubs. Campagnolo is using its G3 lacing pattern front and rear for its prototype disc-equipped wheels. All of Campagnolo’s prototypes are supplied to the teams under contract and are destined to be destroyed at the end of the testing phase. Campagnolo made use of a Sarto carbon frameset for one its demo models.

Disclosure statement: Campagnolo paid for all of the author’s travel and accommodation expenses. In addition, Campagnolo has advertised on CyclingTips in the past however we were not paid to prepare this article.