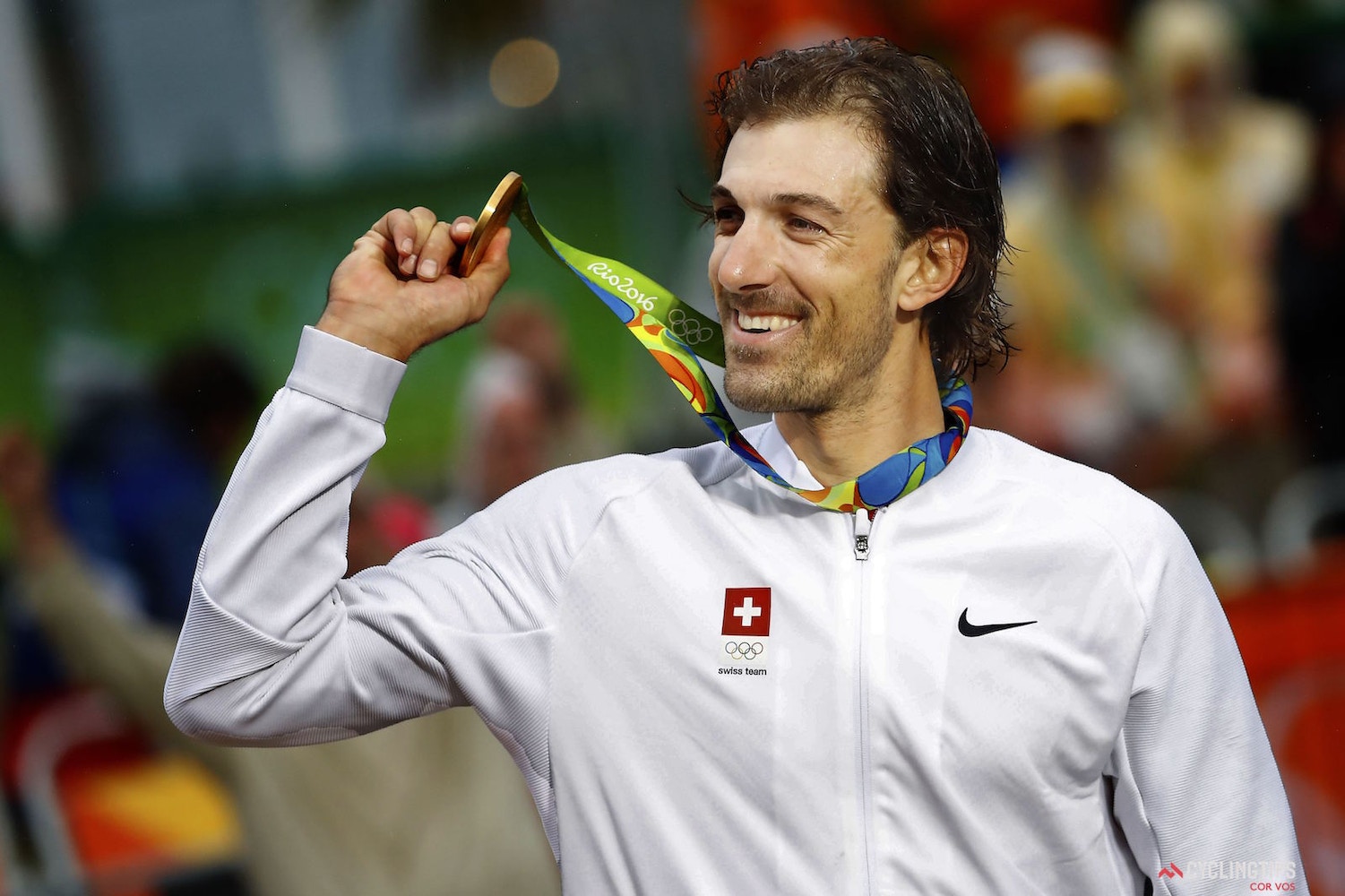 On a hilly Olympic time trial course that appeared to favor lighter — and younger — riders, Fabian Cancellara turned back the clock, and defied all expectations, to smash the competition and win a second Olympic gold medal Wednesday in Pontal, just west of Rio de Janeiro.

The medal bookends his Olympic time-trial victory in Beijing in 2008, as well as his four world TT titles earned between 2006 and 2010.

The Trek-Segafredo rider executed a flawless performance on the wet, challenging Grumari circuit that was also used in the men’s and women’s road races over the weekend. The men’s time trial course covered two laps of the 29.8km Grumari circuit.

“It means a lot to participate in sport’s highest event that the world presents, and to win the gold medal in my retirement year,” Cancellara said. “I’m just super proud.”

While the battle for silver and bronze was tight, Cancellara blasted the 54.5km (33.9-mile) course in a time of 1:12:15; 47 seconds faster than Tom Dumoulin (Netherlands), and 1:02 faster than bronze medalist Chris Froome (Great Britain). Spain’s Jonathan Castroviejo put in a solid ride, missing the bronze medal by just five seconds, to finish fourth.

It was an emotional victory for Cancellara; the three-time winner of both the Tour of Flanders and Paris-Roubaix is riding in the final season of his storied 16-year career. Cancellara was the quickest rider at the 10km mark, clocking in 0.67 seconds faster than Australia’s Rohan Dennis. Though the Swiss strongman dropped off the pace, placing behind Dennis and Dumoulin at the second time check, Cancellara was 18 seconds faster than Dennis at the top of the Grumari climb on the second lap. From there, his advantage only widened to the finish line.

Cancellara sat in the hot seat — a beach chair — while Dumoulin and Froome finished their rides.

Upon realizing he’d won, the 35-year-old Cancellara first jumped up and down, celebrating in a group hug with Swiss national team staff, before he sat down, put his head into his hands, and broke into sobs.

As reported by NBC, Cancellara was overheard saying “today was my last one” after the race was over. Whether that was referring to his last race, or last time trial, was unclear. A Trek-Segafedo team spokesman said, via email, that the team had no news that Cancellara was retiring immediately: “As it stands, he’s still a rider for us until the end of the season. Things may change, but that’s the way it stands now.”

And while Cancellara cried tears of joy, Dennis was left wondering what might have been. Though it didn’t cost him gold medal — no rider was superior to Cancellara — what appeared to be slipping aerobar extensions forced the Australian to take a bike change, losing precious time and momentum. Dennis would finish fifth on the day, eight seconds behind Froome, and nine seconds away from a bronze medal. It was Froome’s second bronze medal in the Olympic time trial, a disappointing result for the Tour de France champion, who finished second and first in two time trials in July and had targeted the hilly Rio course as a major 2016 season objective.