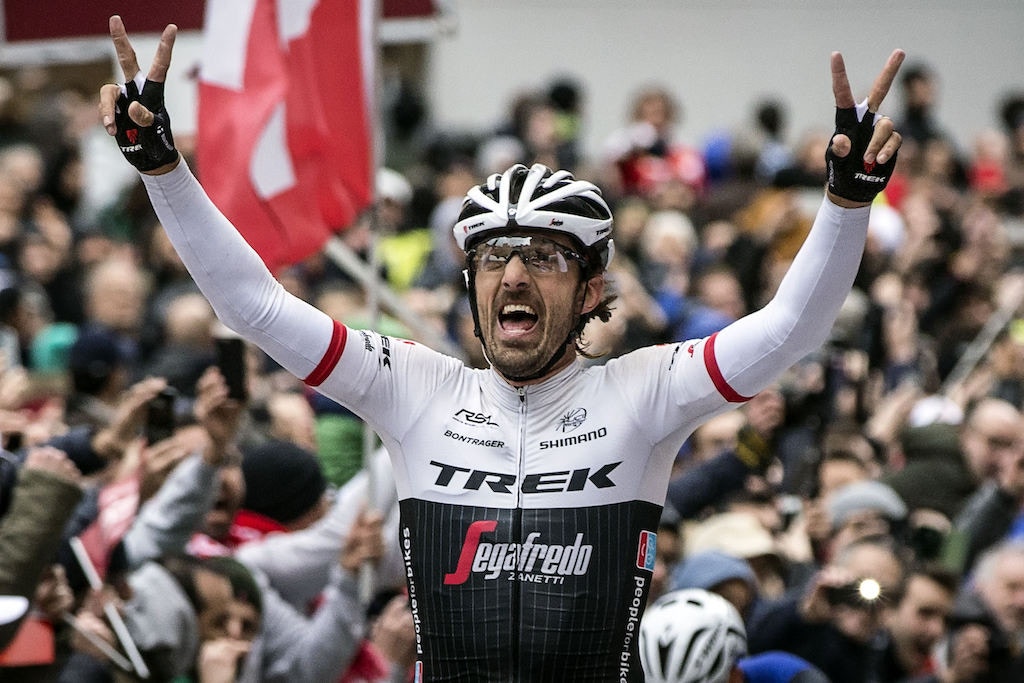 The roar of the tifosi was numbing as Fabian Cancellara descended into Piazza del Campo, three fingers in the air to signify the three times he has conquered the white roads of Tuscany.

Spartacus, as he is known, coasted to a stop shortly after the finish line, the bowl-shaped piazza allowing him to stand above the crowd. He hoisted his bike in the air and yelled, with raw emotion reminiscent of a neo-pro claiming his first win. He jumped up and down with his Trek-Segafredo team staff, sharing the celebration, before finally walking back down to the podium, soaking up the warmth of the crowd despite the chill in the air.

“Everything I did after the finish was spontaneous,” Cancellara said of his victory celebration. “There were so many people that I couldn’t go anywhere with my bike, so I walked towards my staff and teammates. I felt as proud as a kid.”

Before the start of the season Cancellara confirmed rumors that 2016 would be his last as a professional. Any thoughts of him quietly fading into retirement were quickly shot down when he won the Trofeo Serra de Tramuntana, the third day of the Challenge Mallorca. The four-time world time trial champion confirmed his form ahead of Strade Bianche by besting Tony Martin (Etixx-Quick-Step) in the race against the clock at Volta ao Algarve.

On the steep gravel climbs of the Chianti region near Siena, Cancellara put his renowned time trial power to good use, bridging to the attacking duo of world champion Peter Sagan (Tinkoff-Saxo) and last year’s winner Zdenek Stybar (Etixx-Quick-Step). He attacked multiple times on the run-in to the finish, clearly worried about Stybar’s punchy ability on the steep final climb into the heart of Siena.

“Only on the finishing line I knew I had won,” Cancellara said. “Stybar is a tough guy who can perform well on the last climb. I also had to pay attention to Peter [Sagan], because with him you never know. I tried to drop them twice but couldn’t. Brambilla went and I tried to not leave him too many seconds, though I knew the uphill would be hard for him. Thankfully my experience paid off today. Taking a risk, you can win or lose, but at the end I won. It’s a good sign for the races to come, starting with Milan-San Remo.”

The sixth sector of Strade Bianche will now don Fabian Cancellara’s name, though he joked the seventh sector may suit him better. “Today it’s special because I won and I’ll have my name on a ‘sterrato’ forever,” Cancellara said. “It’s a huge honor to have my name on a traveled road, coming off the back of a bridge being honored in my recognition in my home town, though maybe sector seven would fit better with my lucky number.”

Cancellara has achieved all three of his wins in the Italian semi-classic during an Olympic year, previously winning the 2008 and 2012 editions. He clearly has a connection with the roads of Tuscany, as no other rider has been able to win multiple times.

In its tenth edition, Strade Bianche has slowly morphed from a tune-up race to one that many teams target and has garnered the respect of spring classics legend. “We can see how the race is growing in stature, especially with the big names racing,” Cancellara said. “Many teams arrived on Thursday instead of Friday, too, showing its importance. A race can’t become a WorldTour event just like that, but this race has to go up to the next level. Siena carries a lot of history. On the road, the gravel makes it unique.”

When questioned about whether he might hold off retirement, given his success this year, Cancellara stated a firm “no,” and after a moment’s pause made clear that, despite all the fanfare, cycling is not the end all, be all.

“For sure I could easily ride more years, but that is not what I want. I have 16 years in my pocket and I said this is my last year. Whatever may come, there will not be another position to come. For now there will be no Hour Record, no world championship. I know I could still win a lot, but winning is not everything in life. I said life, cycling is a part of my life, but it is not part of my life every day.”

“I am enjoying racing my bike. I know every race I will do. Everything I am doing I know it is my last time, but that is what I can enjoy now. I have my freedom. I just go on like I am doing now because even like tough last year it doesn’t mean I can go on and on. I have other ambitions for what comes after and I am 100% sure I will not put any numbers on my jersey to compete with these riders down in the bunch.”

With that Cancellara got up and strode out into the rain that had begun to fall in the streets of Siena. As the rain began to fall harder, he coaxed his fellow red-jacket clad posse of team staff into a run. Despite the brutal race, Cancellara’s body still flowed with the adrenaline that comes with winning — and though he’s done it so many times, on so many big stages, the significance was lost on no one.