Find a store Blog
‹ back
Home
Blog
News
King of the Breakaway: Cannondale on Top at Amgen Tour of California

King of the Breakaway: Cannondale on Top at Amgen Tour of California 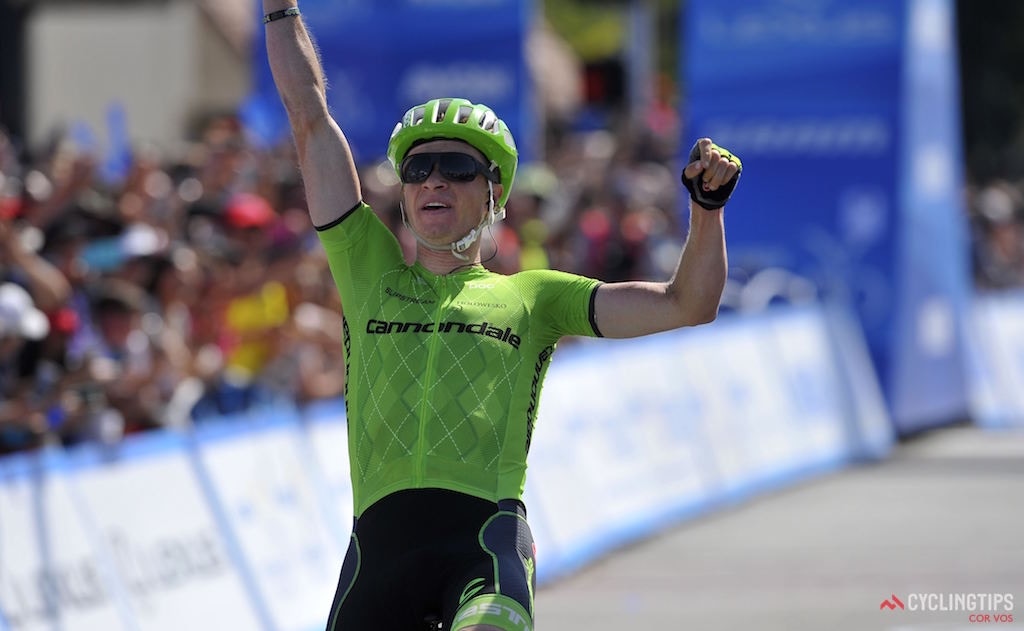 American Ben King (Cannondale) took a thrilling victory in stage 2 of the Amgen Tour of California into Santa Clarita, as the remnants of the stage’s breakaway narrowly survived the fast-closing peloton.

The win had a much deeper meaning for King after he had to battle back from a broken leg in January suffered during a crash while out training.

It was yet another victory from a daylong breakaway for the Virginian, to go along with his win at the 2015 Criterium International, as well as his 2010 national road championship.

“Every result in my career has come from the breakaway, when the peloton kind of underestimated the break.” King said. “It’s really special. It’s a big surprise.”

American Evan Huffman (Rally Cycling) was the only of four to stick with King all the way to the finish, and though he was forced to lead out the sprint from the front, he had still gotten into King’s head.

“I knew Evan is a pretty quick sprinter, he smoked me in the KOM sprints,” King said. “I was hesitant to let it come down to a sprint, but I couldn’t drop him on the climbs. So we were committed to make the breakaway stick. In the end, Evan led out the sprint, and I was able to come around.”

Huffman was disappointed to come so close to victory, but took home the King of the Mountains jersey as a consolation.

“The team plan was to race for the breakaways, to try to get the KOM points,” said Huffman. “Once I was out there, I was trying to win those sprints, but Ben gave me a run for the money. I got the first two, and he let me have the last one. We worked well together, but it was touch and go. We had the chance to make it to the finish. It was a hard sprint. It sucks to be that close. Ben was just a little bit stronger than me. There’s not too much more I could have done.”

Alexander Kristoff (Katusha) beat out Peter Sagan (Tinkoff) in the battle for best of the rest, eight seconds behind the American duo. For the second day in a row the California sunshine was absent as the peloton rolled out — this time from South Pasadena. The 148km trek to Santa Clarita included over 3,400 metres of climbing, including the Category 1 climb up the Angeles Crest Highway right from the gun. Riders were seen warming up on trainers prior to the start, a sign that many expected a tough first hour of racing.

Attacks flew left and right from the drop of the flag and soon a dangerous 22-rider group, which included King, had slipped off the front of the peloton on the climb up the highway.

French Pro Continental outfit Direct Energie, racing at the Amgen Tour for the first time, missed the move and chased hard at the front of the peloton.

The bunch reformed in sight of the first KOM line, and surprisingly, a few of the GC heavyweights showed their cards by sprinting for the points. Most notably were last year’s Amgen Tour runner-up Julian Alaphilippe (Etixx-QuickStep) and 2014 runner-up Rohan Dennis (BMC Racing)

“I wanted to get into the breakaway, that was the team plan,” King said. “I think I knew a week ago that on Stage 2, I would be in the break. I followed a lot of moves early on, until it was finally just four guys, which is usually kind of suicidal. At the same time, it’s going to be hard for the guys in the back to control, which takes the pressure off my team.”

Over the tough Category 2 climb of Upper Big Tujunga Canyon Road, the quartet continued to build its advantage, while the Tinkoff team of race leader Peter Sagan set tempo on the front of the peloton.

The leaders built up a maximum advantage of seven and a half minutes with 80km to the finish before Tinkoff began to chase in earnest down the long wide-open canyon descent. Trek-Segafredo put a rider in the chase, followed by Direct Energie, and the gap to the leaders began tumbling down.

By the time the leaders rode through the first intermediate sprint of the day with 55km left to race their lead was down to five minutes. King claimed the sprint point and with it a three-second time bonus, pulling him to within seven seconds of Sagan’s lead.

The back-to-back Category 2 accents on Little Tujunga Canyon Road allowed the peloton to inch that little bit closer, while Lunke dropped off from the break, unable to hold the pace.

At the top of the final categorized climb of the day, with 30 kilometres to go, Tinkoff had disappeared all together from the front of the race, while BMC Racing came to the fore with strongman Michael Schar driving the pace.

On the descent Barta punctured, forcing him to change bikes. With only 25 kilometres to go, and clinging to a three-minute advantage, King and Huffman appeared to opt out of waiting for the young Axeon rider.

The 20-year-old didn’t quit, however, and chased hard to regroup with King and Huffman a few kilometres later; soon thereafter the leaders went through the final sprint of the day with King picking up maximum bonus seconds again.

Meanwhile, world time trial champion Vasil Kiryienka (Team Sky) had crashed on the fast descent out of the canyon. The Sky rider was shaken up, with dirt caking his jersey on the left side. He would remount his bike after several minutes and finish the stage, albeit far behind the peloton.

Heading into the final 10km, the gap hovered around the one-minute mark. Barta soon dropped off the pace, the effort of having chased after a puncture not doing his legs any favors. BMC continued to lead the peloton, as race leader Sagan was down to one teammate, his brother Juraj.

Under the red kite, the leading duo of King and Huffman continued to lead by a minute. King slotted in behind Huffman and forced the Rally rider to pull most the entire final kilometer.

Huffman opened up his sprint from the front, and initially opened a slight gap, but with a crosswind blowing down the finishing straight King was able to catch his wheel and come around at the line, throwing his hands in the air and pounding his chest. Kristoff won the field sprint for third.

“Yesterday we worked hard to bring it to a sprint. I was in good position in the end, but I didn’t have the legs, and I was disappointed,” Kristoff said. “Today was harder. It was difficult to control it. We didn’t want to pull until after the last climb. Then we put our guys on the front to help the others. But they were strong, and it was too big a gap, so we were only sprinting for third place.”

King now leads the general classification by eight seconds over Huffman, with former leader Sagan in third, 14 seconds behind.

Stage 3 begins in Thousand Oaks, but a brutal finish awaits the riders, as they will tackle the Hors Categorie climb of Gibraltar Road, meaning it’s almost certain the yellow jersey will again change hands as the pure climbers battle for the stage win on this year’s only mountaintop finish.

“Every result in my career has come from the breakaway, when the peloton kind of underestimated the break ,” King said. “That’s what happened when I won the stage in Criterium International, last year, when I snagged the jersey. If I had won this stage after a few days, if this had come after Gilbraltar, it wouldn’t have put me into the jersey. It’s just timing, but this doesn’t change the team’s objectives.

“I’ll still be supporting Lawson [Craddock] tomorrow. The best-case scenario tomorrow is that the jersey shifts over to Lawson’s shoulders.”