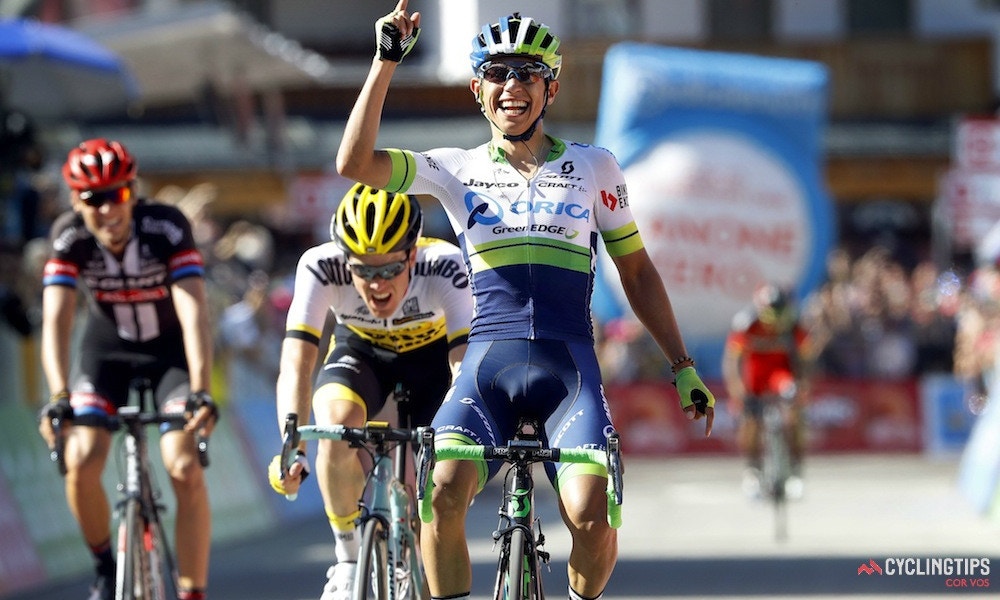 Esteban Chaves (Orica-GreenEdge) has won the queen stage of the 2016 Giro d’Italia, taking victory from a three-rider group after 210 grueling kilometers and six categorized climbs.

The charismatic Colombian outsprinted fellow GC contender Steven Kruijswijk (LottoNL-Jumbo) and breakaway rider Georg Preidler (Giant-Alpecin) in the uphill dash to the line as Kruijswijk moved into the overall lead.

Chaves and Kruijswijk had been in a group of the overall favorites more than nine minutes behind the breakaway with 60km to go, before the pace increased in that group and the leaders were slowly reeled in.

A move from Vincenzo Nibali (Astana) on the day’s final climb, with 27km to go, sparked a series of attacks that saw only Chaves and Kruijswijk get clear, with Nibali left to chase solo and the other GC contenders caught out.

In the lead group, Darwin Atapuma (BMC) made a promising late attack of his own, jumping clear of the remnants of the breakaway, also on the day’s final classified climb. He was only caught with 1.8km to go in the stage, as Chaves, Kruijswijk and Preidler made contact ahead of the uphill finish.

Nibali would go on to finish 37 seconds behind the leading trio, while Alejandro Valverde (Movistar) was the worst off of the GC contenders, dropping more than three minutes.

Kruijswijk now leads the Giro d’Italia by 41 seconds ahead of Vincenzo Nibali with Esteban Chaves in third, another 49 seconds behind.

It was a beautiful day in the Dolomites of north-eastern Italy as the riders set off to begin stage 14 of the 2016 Giro d’Italia. But while the weather was pleasant, the race ahead was anything but — six categorized ascents and more than 5,000m of climbing made for the hardest day of racing at this year’s Giro.

With many riders keen to get in the day’s big breakaway there were plenty of early attacks, but it took roughly 45km for a move to finally stick.

Back in the peloton, Movistar took responsibility for the pacemaking, riding in support of new race leader Andrey Amador. For more than 100km, Australia’s Rory Sutherland sat on the front of the bunch, controlling proceedings for his Costa Rican teammate (and for Alejandro Valverde).

After 75km of the 210km stage the gap from breakaway to peloton was out to 4:20 and on the first of the six climbs, it had grown to more than six minutes. Cunego extended his lead in the KOM classification over the first climb, the first-category Passo Pordoi, as the lead grew to beyond seven minutes on the descent that followed.

A short time after Lopez was caught, Ruben Plaza set off on a solo jaunt of his own, hoping to replicate his victories from last year’s Tour de France and Vuelta a Espana. Atapuma, Lopez and De la Cruz would form a chase group that was 23 seconds behind the lone leader with 82km and three climbs still to go.

Two chase groups would soon come back together as Plaza, working hard, managed to extend his lead to 1:30 with 60km to race. At that stage the ever-thinning peloton was some 9:20 behind.

A lack of cohesion in the chase group saw Plaza move to more than two minutes clear but with Siutsou in the virtual race lead, the Belarusian soon took charge in the chase and started to make up ground on the day’s hardest climb: the Passo Giau.

The high tempo being set by Siutsou ensured he had only Atapuma for company as he powered up the stage’s penultimate climb. The pair would catch a flagging Plaza with 46km to go, more than 5km from the top of the Passo Giau, with Plaza soon being dropped.

At this stage just 12 riders remained in the group of the GC favorites, 6:30 behind the leaders, the peloton having been split by a fierce tempo from the Astana team.

Andrey Amador’s time in pink came to an end with 43km to go when he was dropped from the group of the GC favorites. At that point the group he had just left was less than five minutes from the front of the race.

Atapuma and Siutsou crested the snow-covered Passo Giau with 4:10 between them and the Astana-lead GC group before plunging into the valley below and on toward the day’s final climb. By the time the two leaders had started the final climb, they’d been rejoined by fellow breakaway rider Georg Preidler. The group of the GC leaders, too, was about to swell, with Andrey Amador among the riders to catch back on, despite having been roughly a minute behind at the top of the Passo Giau. With 30km to go, the three leaders were just inside four minutes ahead of the maglia rosa group.

Vincenzo Nibali attacked with 27km to go, on the final climb, with only Steven Kruijswijk (LottoNL-Jumbo) and Esteban Chaves (Orica-GreenEdge) able to follow. Rafal Majka (Tinkoff), Ilnur Zakarin (Katusha) and Rigoberto Uran (Cannondale) would soon bridge across, while Alejandro Valverde (Movistar) was unable to make contact and started sliding backwards.

Further up the road, Atapuma was putting in a move of his own, leaving Preidler and Siutsou behind and deciding to go it alone.

With 24km to go, and still 2km to the top of the final climb, Chaves attacked in the GC group, followed by Kruijswijk. The group of the favorites splintered again as a result, leaving Nibali to chase the Colombian and the Dutchman on his own. At this point just 1:30 separated Chaves and Kruijswijk from the lone leader in Darwin Atapuma.

At the summit of the Passo Valparola, 19.4km from the finish, Atapuma was 36 seconds in the clear, with Chaves and Kruijswijk joining Siutsou and Preidler just as they crested the climb. Nibali was the next over the top, another 30 seconds behind.

With 10km to go, and most of the final descent completed, Atapuma was 30 seconds ahead of the four-rider chase group. Nibali was another 30 seconds behind and still riding solo.

Siutsou was dropped from the chase group with a touch over 5km to go, the gap to Atapuma inside 25 seconds. Nibali would catch Siutsou with 3.8km to go, the Belarusian jumping on the Italian’s wheel. And then, with 1.8km to go, Atapuma’s impressive solo venture was at an end, as Kruijswijk, Chaves and Preidler made contact.

Preidler hit the front with more than 500m to go, as Atapuma dropped from the lead group. When it came to the final sprint it was Esteban Chaves that powered ahead of Preidler and Kruijswijk to win the stage by several bike lengths.

Nibali powered in to the finish 37 seconds later, with Siutsou on his wheel, minimizing his losses. The 2016 Giro d’Italia continues tomorrow with the race’s third and final individual time trial: an all-uphill, 10.8km effort on the steep Alpe di Siusi that is sure to further shape the general classification. The riders will then enjoy a third and final rest day before the final week of the race.