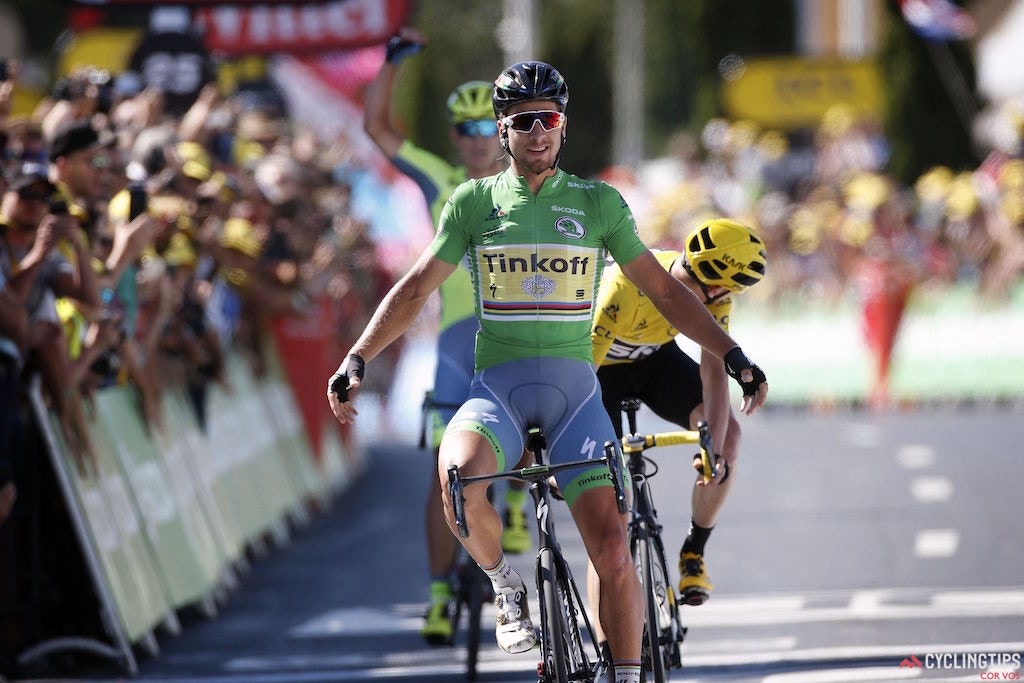 Peter Sagan (Tinkoff) took his second stage win at the 2016 Tour de France in Montpellier on Wednesday with the maillot jaune of Chris Froome (Team Sky) finishing second, as the peloton shattered in the crosswinds in the finale of the stage.

Sagan won the stage from a group of four; he was joined by teammate Maciej Bodnar, while Froome was supported by teammate Geraint Thomas. The four riders jumped clear from a splintered peloton with 10km remaining, and opened a maximum gap of 23 seconds. They finished six seconds ahead of the peloton, with Froome taking six seconds in time bonus for finishing second on the stage.

“To go in a breakaway with the yellow jersey, the green jersey, and guys like Bodnar and Thomas, you cannot plan that,” Sagan said. “It just happens. Crazy.”

The stage was marked by strong crosswinds. With 15km to go, Fabian Cancellara (Trek-Segafredo) put his significant power to use on the front of the peloton. Bodnar then took over with Sagan and the duo opened up a gap. Froome was attentive at the front and quickly sprinted up to Sagan and Bodnar. Geraint Thomas (Team Sky) was the last rider to make the split.

The quartet opened up a significant advantage, and panic ensued behind. BMC Racing tried to bring Van Garderen and Richie Porte back to the front, with Etixx-QuickStep also contributing in the chase. Nairo Quintana’s Movistar team was not to be seen near the front.

With 5km to go the leading four containing the malliot jaune of Froome and the maillot vert of Sagan held a 23-second advantage over the chasing peloton. Meanwhile, Mark Cavendish (Dimension Data) was dropped from the group with a mechanical problem. Team Katusha also came to the front of the peloton to assist Etixx-QuickStep in the chase.

Sagan easily sprinted to victory with Froome capturing second, and six bonus seconds. Alexander Kristoff (Katusha) brought home the main peloton 11 seconds behind, along with all of the other GC contenders.

Froome extended his lead on a day that was supposed to be for the sprinters. Adam Yates (Orica-BikeExchange) trails Froome by 28 seconds in the overall with Dan Martin in third, 31 seconds behind. Quintana sits fourth overall, 35 seconds back.

“It was a difficult day for me,” Quintana said. “There was a lot of wind and it was all flat. And the sprinters were favoured. Froome took a few seconds by taking advantage of the moment, but I want to remain positive. We didn’t crash, while it was very nervous. Organisers are thinking about the show, but we take chances with our lives every day and especially in stages like this.”

The 2016 Tour de France traveled from Carcassonne to Montpellier on stage 11. The flattish 162.5km (101mi) route included two Category 4 climbs early in the stage, lending itself to a likely day for the sprinters. However, traversing the coast, many in the peloton expected crosswinds. “It’s going to be a hectic day with crosswinds,” said BMC rider Greg Van Avermaet before the start. “The team who can take advantage of it? BMC! We have a bunch of strong guys who know how to race in these conditions. I believe there will be a split and a few big guys could be surprised. It’s not only us. Lotto or Etixx-QuickStep also love to race in these conditions.” The high winds at the start of the stage saw a nervous peloton and fast speeds. Arthur Vichot (FDJ) and Leigh Howard (IAM) escaped off the front and began building an advantage, as riders were hitting the pavement in the bunch. George Bennett (LottoNL-Jumbo) went tumbling into a ditch about 25km into the race along with the polka-dot jersey of Thibaut Pinot (FDJ). FDJ performed a massive chase to get the Frenchman back. The riders were flying along, with 47.4km covered in the opening hour of racing.

Alex Howes and Lawson Craddock of Cannondale-Drapac both also went down in separate crashes, adding to what has been a taxing past few days of racing for the American team. Cannondale team leader Pierre Rolland hit a wall on the descent of the Col du Pyresourde on Stage 8 and suffered significant road rash. Sebastian Langeveld abandoned the race on stage 10. And on Wednesday, Craddock spent a considerable time in the caravan trying to rejoin the peloton. He finished last on the stage, 17:01 down, but within the time cut.

With 100km to go, the peloton settled down and the leading duo held an advantage of 4:15. The riders were slowly moving closer and closer to the coast, which meant crosswinds would be coming again. Team Sky, Lotto-Soudal, and BMC Racing were seen being attentive at the front of the peloton.

The Belgian team of Etixx-QuickStep came to the fore 10 kilometres later and split the peloton. Dutch rider Wilco Kelderman (LottoNL-Jumbo) was caught out, along with Pinot and Tuesday’s stage winner Michael Matthews (Orica-BikeExchange).

The speed of the riders did not let up, and Trek-Segafredo further split the peloton into multiple echelons. Riders were spread all over the course. Howes was behind with a small group containing Matthews, but Craddock was in trouble, off the back, alone.

Team Sky used Classics strongmen Ian Stannard and Luke Rowe to bring the splintered peloton onto the back of the breakaway with 61Km still to go. Marcel Kittel (Etixx-QuickStep) took the intermediate sprint point followed by Sagan and Cavendish with 48km to go. The second group on the road, containing Pinot, Matthews, and Majka, was 43 seconds behind. A lull in the wind helped Pinot’s group to rejoin the main peloton with 35km to go.

Tinkoff punched the pace with 25km to go, making sure they were at the front of the peloton as the race made a left-hand turn into a crosswind. The riders were touching speeds of 75kph, as teams fought to position their team leaders at the front. With 15km to go, the race split to pieces in the crosswinds. Cancellara put many riders in the gutter, as he drove the pace. The neon yellow jerseys of Tinkoff quickly hit the front of the peloton and caused even more damage. Bodnar took a massive pull, which only Sagan could follow. Froome was attentive at the front and quickly jumped on the Tinkoff train that was leaving the station. Thomas joined the group and quartet began driving away from the peloton.

Sagan took the stage victory with Froome second, extending his advantage in the overall classification. The defending champ has shown a nifty hand of tactics this year by attacking and gaining time on a descent, and now gaining time on a flat stage, in the crosswinds.

Yates kept his white jersey of Best Young Rider of the Tour for another day and Pinot kept his King of the Mountains jersey. Sagan extended his lead in the points classification to 90 points over Cavendish, 309 to 219.

“Physically, I have no consequence from that crash,” Pinot said. “It happened early but everything after has been difficult. It was very risky. On those roads there wasn’t space for everyone. After I crashed, there was no reason to take risks. Peter Sagan is the world’s best rider at the moment, far ahead of any of us because he goes well on all the terrains! So he deserves to win today.”

Cavendish was in the leading group, but suffered a mechanical at the wrong moment.”When the group went, I got by alright,” he said. “But then someone touched my crank and I got blocked on a gear. It’s really a shame but it’s the way it is. We knew it was going to happen. The green jersey was not my objective anyway. There are not lots of riders who can beat Sagan. He’s a rider like no other.”

On Thursday, the Tour de France tackles the “Giant of Provence,” Mount Ventoux. The 184km (114mi) stage 12 travels from Montpellier to atop the feared mountain. The Tour last visited the famous climb in 2013, where Froome dispatched Quintana with vicious accelerations. The stage victory helped cement the Britain’s first overall victory in the Grande Boucle. Being Bastille Day, the French are sure to be on the attack. One who is riding well at the moment is Pinot. The FDJ rider also has a victory atop L’Alpe d’Huez and winning atop Ventoux would further strengthen his palmares.