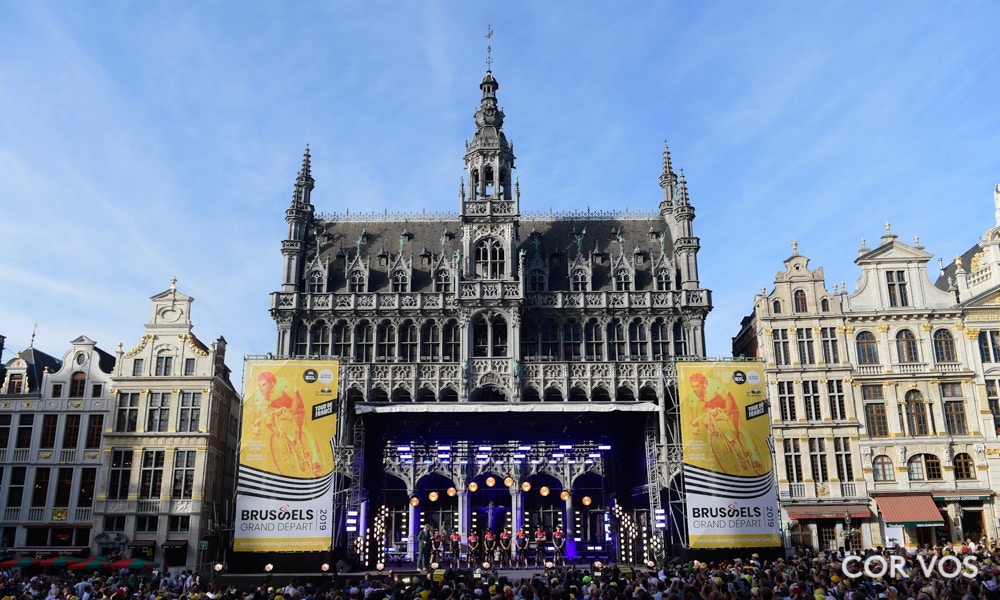 Brussels is pumping, and the word around town is that a young Australian could be the first man in yellow on Saturday.

I can't remember a tour where the journos have been so divided on who's going to win overall, but there was a definite favorite for the first stage and the first Yellow jersey – Caleb Ewan.

One day in the Maillot Jaune can change a cyclists career such is the prestige of the yellow jersey, and this year the jersey celebrates its centenary. Only Eight Australians have had the honor since Phil Anderson sensationally rode up the Pyrenees battling head to head with French Legend Bernard Hinault in 1981. Plus we're in the birthplace of its most famous wearer - the legendary Belgian Eddy Merckx who wore it a record 96 times and won a record 34 stages. Second, on that list of stage victories is the Manx Missile Mark Cavendish with 30 wins but he has been controversially omitted from the Dimension Data team.

Most years Le Tour starts with a prologue, a short individual time trial, but on Saturday we have a 194.5 km road stage, and Ewan has a genuine chance to take the first yellow jersey in his first Tour. But all the best sprinters are here, and they're lining up for this first stage in cycle crazy Belgium. I reckon the biggest threats to the super quick young Aussie are Dutchman Dylan Groenewegen and Italian Elia Viviani who both have powerful lead-out trains.

Day two is a 27.6 km team time trial, and it could see the leaders jersey change teams. The Favorites here are Jumbo-Visma, Mitchelton Scott, Deceunick-Quickstep, Ineos and Astana. The stage is also crucial for all the GC contenders as, even though it's a team time trial, the times also count for the individual honors and a lousy team performance here could lose a rider up to a minute in the individual overall classification. Check out the latest episode of the de Tour Podcast below, or scroll down for more on the contenders; Team Ineos (formerly Team Sky) may have lost their biggest rider in Chris Froome with a broken femur and many other injuries, but they are still the strongest team on paper by a country mile. Defending champion Geraint Thomas certainly deserves the tag of pre-race favorite, but he hasn't come into this race completely unscathed himself, crashing out of the Tour of Switzerland and missing the crucial tough days needed for his preparation. The fact that his teammate Egan Bernal went on to win that Tour makes him a co-favorite and the 22-year-old Colombian superstar looks in brilliant form.

With Dutchman Tom Dumoulin also a late scratching there is no doubt that this is the most open Tour in a decade and the contenders are lining up. At the front of that cue is Australia's only contender for final honors, Richie Porte. The diminutive Tasmanian climber has had a challenging season with illness but seems to be hitting his straps just in the nick of time.

Australian Team Mitchelton Scott is now a genuine contender for top honors although it will be a couple of Englishmen who will be at the front when the race heads into the rare air of the high mountains. Adam Yates has been given the honor of leading the team but twin brother Simon, winner of last year's Vuelta, will provide brilliant support and I'm told he has recovered from the Giro amazingly well.

So here is my list of riders who, baring bad luck, will make the top 10 in Paris: Richie Porte – This is his last chance, and he will need to grab everyone on offer. But Porte is my pick because I believe he has the ability. Stage 9 has knocked him out for the past two years, so I'm sure he will be nervous this year on the stage to Briorde. Richie is never going to get a better chance than this.

Adam Yates – supported by his twin brother Simon, this dynamic duo could go all the way. A super strong team with Jack Haig climbing superbly will be crucial.

Geraint Thomas – Simply put, he's the defending champ with the strongest team. But if he makes one mistake, it will be his Colombian teammate that will take charge.

Jakob Fuglsang – In sensational form and with a strong Astana team, he will be a serious challenger.

Thibaut Pinot – A Frenchman hasn't won since Hinault in 1985. Pinot is the great French hope and is capable of getting on the podium.

Vincenzo Nibali – Very few have managed to podium on the Tour after doing that at the Giro. Dumoulin did it last year and Nibali, who finished 2nd in the Giro, has the class to repeat it. Romain Bardet – The other French hope who can climb with the best, can't time trial but there's only one ITT this year.

Egan Bernal – In the end will probably have to support Thomas. But one slip from the Welshman and Bernal has all the class to grab the chance.

Alejandro Valverde – Movistar claim to have a three-pronged attack, but I've lost faith in Quintana, and I don't reckon Landa is up to it either. The oldest of all the contenders Valverde is current world champion and hits this year's race in hot form winning last week in La Route d'Occitane and the Spanish national title.

Roberto Uran – An excellent second overall in 2017 shows what the talented Colombian is capable of. Hasn't shown that sparkling form this season but can't be ruled out.

Dan Martin – The Irishman is one of my favorite riders in the peloton. He will be the most aggressive of all the contenders – Expect a top five. I do like the course this year – it's a ripper. The Tour always takes in the two major mountain ranges, the Pyrenees and the Alps but this year they have added the challenging climbs of the Vosges and the Massif Central. Although the overall contenders have to be very alert right from day one, the race for the GC men starts on stage 6 with the super steep finale to La Planche des Belles Fille. The next week down through the Massif Central through to the Pyrenees is filled with opportunities for the most aggressive and full of danger for the big name contenders. The final three stages in the Alps before we head to Paris are brutal with the penultimate stage offering a 30 km climb to the summit at Val Thorens.

King of the Mountains, Sprinter's, and Young Riders Classifications The race for the maillot vert or green jersey has been Peter Sagan's to lose over the past seven years. In 2017 he was controversially disqualified from the Tour for rough riding, and Aussie Michael Matthews went on to win. Last year Sagan won his sixth green jersey but had to battle through severe pain after a crash in the final week. This year Matthews looks to be a more serious threat. His form is solid, and his team leader Tom Dumoulin is out because of a knee injury so he will have the powerful Sunweb team at his disposal.

The King of the Mountains polka-dot jersey is probably the most conspicuous in the peloton, but I don't rate it as high as the Green Jersey. Perhaps because the best climbers in the race are usually racing to try and win the actual Tour and not the jersey, it is typically won by an opportunist who consistently gets in the early breakaways and gains points on the smaller climbs. That being said, it takes an outstanding rider to win it, and It looks to have a very French Connection this year. Defending KoM champ Julian Alaphilippe will be targeting the jersey, and his primary challenger looks like Warren Barguil who dominated the category in 2017 before going missing last year. But he's back now after a broken pelvis in March. And wearing his new jersey of National French champion should inspire him even more.

The other jersey is the White one – The Young Riders classification is for riders 25 and under. It is very prestigious as most experts believe the winner is a Tour champion of the future. I reckon you put Egan Bernal's name on it now.

Only eight Aussies are facing the starter's gun on Saturday, which is a bit down on the expectation of 12 or more, but it's real quality. We've already sung the praises of Richie Porte, and Caleb Ewan so here is some background on the other six. Michael Matthews - He's in brilliant form and the only real challenger to Sagan for the green jersey. Expect at least one stage win and probably more. This year he crashed out of Paris-Nice, but returned to take two stage wins at the Volta a Catalunya, an impressive sixth at the Tour of Flanders, fourth at De Brabantse Pijl, eighth at La Flèche Wallonne and two podiums in Tour of Switzerland.

Luke Durbridge and Michael Hepburn - Both will be crucial to the success of Mitchelton Scott. They will be pivotal to a great Team Time Trial and have a significant role in containing breakaways on the flat. If Yates gets in the yellow at any stage, they will be critical in keeping the pace of the peloton high.

Jack Haig - A youngster from Bendigo riding his first Tour. A fantastic climber, he was in great form, but then a knee problem kept him out of the Giro. He seems to be fully recovered and will be a vital cog in the Mitchelton-Scott's ambitions in the mountains.

Simon Clarke - captain on the Road for EF Education, Simon has blossomed late in life and had his best year ever. If Uran is to podium, he will need "Clarkey" directing traffic. Rohan Dennis - Currently the best time triallist in the world, he will have his sights set on stage 13. His recent climbing form in Switzerland showed what many have felt for years that Rohan can meet one day challenge to win this race.

So I'm excited about the next three weeks, especially from an Australian perspective. A definite challenger for overall victory, a big chance for multiple stage victories, a realistic opportunity for the green jersey and an Australian registered team at the pointy end. Now that seems like a pretty positive way to start.

BikeExchange is the place where the world buys, sells, learns and rides. Connect with us today on social media, or sign-up to our weekly newsletters for the latest deals, buying advice, guides and more.