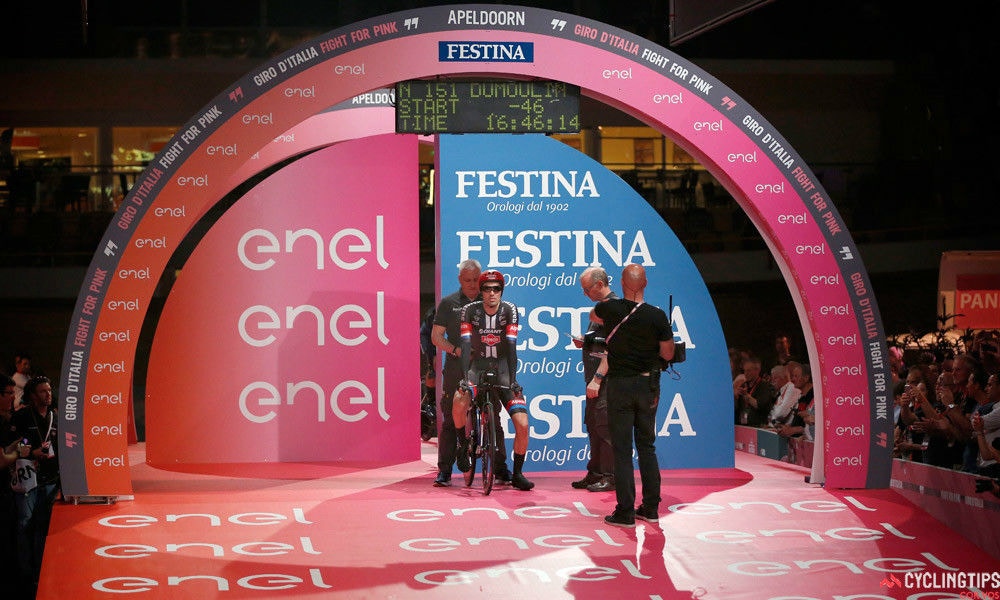 Achieving goal number one in this Giro d’Italia, Tom Dumoulin scorched to an opening day win in the race and secured the pink jersey of overall leader.

The Dutchman took a cherished victory on home soil, covering the 6 mile course in Apeldoorn in 11 minutes 3 seconds. This was fractionally better than Primoz Roglic (LottoNL-Jumbo), with Andrey Amador (Movistar Team) and Tobias Ludvigsson (Giant-Alpecin) six and eight seconds back respectively in third and fourth place.

Dumoulin’s victory has a special significance for two reasons. In addition to coming in the Netherlands, it is also the team’s first win of the season. Giant-Alpecin was badly affected by a training camp crash which injured six riders, amongst them John Degenkolb.

That likely put paid to early victories, increasing the pressure on Dumoulin at the Giro.

“It is a relief,” he admitted. “I am feeling a bit sick in my stomach, but also very happy.”

Dumoulin finished second in two races against the clock in the Tour de Romandie and was determined to step things up. He acknowledged that prior to the pink jersey presentation.

“The luck I didn’t have in Romandie paid back here. Being in the Netherlands, it is very special.

“I think I didn’t do my best TT, but also not my worst. I didn’t do a mistake, but I would have liked to have been a bit faster. But in the end the result is what counts and I enjoyed it.”

Another of the pre-race favorites, Fabian Cancellara, came up short. He had been sick in the days leading up to the start and appeared to be lacking a little spark.

The Trek-Segafredo rider covered the course 14 seconds slower than Dumoulin, and had to settle for eighth on the day. He has said taking the Maglia Rosa in his final season is a major target, and will try to make up the lost time in the days ahead.

However Cancellara may find a rider three places ahead of him to be a barrier to that. Marcel Kittel finished a fine fifth and, with sprint stages coming up, has a good chance of overcoming the 11 second gap between himself and Dumoulin.

Behind this battle, a bigger one is brewing. The overall contenders crossed swords for the first time and in this early skirmish, former race winner and 2014 Tour de France champion Vincenzo Nibali drew first blood. He fared well on the flat course, posting a time just 19 seconds off that of Dumoulin and showing that his form has picked up.

His effort was good enough for 16th on the stage and saw him gain time on his rivals.

“It was a very explosive time trial,” he said. “I had to make a very difficult effort. Of course the first part was like one for the sprinters, but then you had the technical section with the turns.

“It is one stage finished now. I think I can be more than satisfied with how things have gone. But let’s just keep our feet on the ground.”

Nibali won the race in 2013 and is bidding for a second title. He seemed far off form in the recent Giro del Trentino and Liège-Bastogne-Liège, placing 21st and 51st respectively, but is now much closer to where he needs to be.

“You can be nervous, there is a lot of pressure,” he admitted. “It is just nice to get things underway. It is a long day, it is out of the way and now we can look forward to the rest of the race.”

Early on, former hour record holder Mathias Brandle (IAM Cycling) set a strong mark, covering the distance in a time of 11 minutes 17 seconds. However he wasn’t in the hot seat for long: Dumoulin’s team-mate Tobias Ludvigsson hurtled around the course and bettered Brandle’s effort by six seconds.

Tim Wellens (Lotto-Soudal) was one of the riders who threatened that time but he faded in the second half of the race.

LottoNL-Jumbo’s Primoz Roglic fared better and went eight seconds faster, setting a pace that looked like it could be the day’s best. Just over 17 minutes later Andrey Amador (Movistar Team) hurtled in but had to make do with a provisional second place.

He was six seconds adrift and eventually slipped to third when Dumoulin nudged in just ahead of Roglic’s time. All eyes were then on Cancellara, who started second-last, but the Swiss rider came up short and had to be content with eighth.

Dumoulin and Nibali were the day’s main beneficiaries, one winning the stage and the other getting his campaign off to a strong start. Still, despite Nibali’s time gain, Sky’s Mikel Landa was satisfied with his 67th place in the TT.

“I think it was difficult but the time I did is quite good,” the Spaniard said. “It is exactly what we expected. This was short, flat, difficult and I thought that I could have lost more time.”

He gave up 21 seconds to Nibali but isn’t too worried. “I felt quite good. It wasn’t the best day. At the end I am quite tired but I am pretty happy with the result.”

Ludvigsson was also satisfied, despite being beaten by three riders and missing out on the stage win by just eight seconds.

“It is a really good day for the whole team, and also for myself to have the young jersey,” he said, clad in the white jersey after the podium ceremony. “I surprised myself. To be sitting in the hot seat made for a long day.

“With the race starting here in Holland, it is really special for the team and us to be part of the pink jersey. It is really good.”

The race continues Saturday with a 190 kilometre stage from Arnhem to Nijmegen. A bunch sprint is the most likely outcome and Kittel will aim to start getting closer to pink. Roglic will have the same thought in mind and will hunt time bonuses when possible. 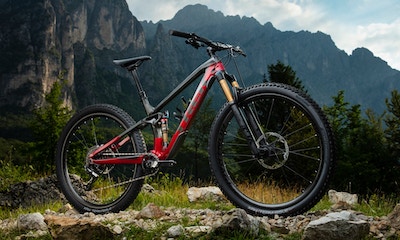