The Greatest e-Bike Tour Ever 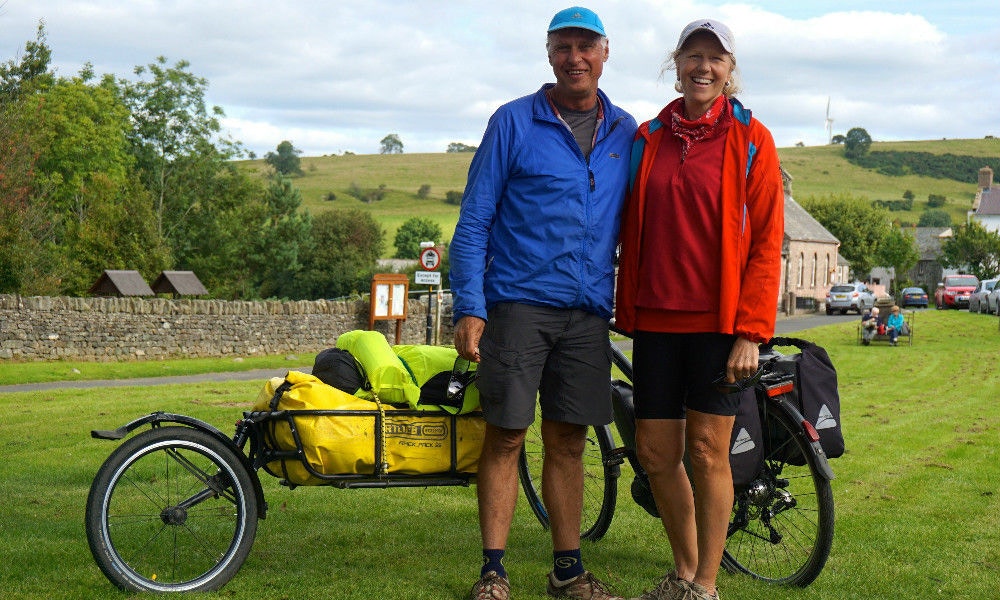 It’s getting dark, the batteries are nearly flat, and we’ll meet someone who will ask us, 'what are you doing?' and we’ll say, 'oh we’re cycle touring on e-bikes, but we’re looking somewhere to stay for the night right now,' — and they’ll say, 'oh, no worries, come and camp in my back yard.'

It’s not so sunny in Ireland when Skype connects us. Gary is wrapped up to the nines and looks ready to hit the road for another day of cycling.

“It was really cold last night,” he mentions “we both shivered in our sleeping bags.”

At this stage in their journey, Rachel and Gary Corbett have experienced their fair share of weather, winding roads and long days in the saddle. When we spoke to them, the two were nearly 10,000km and five months into their world record attempt for the most kilometres travelled on e-bikes.

E-bikes: without doubt one of the fastest-moving trends in the world of cycling, with riders like Rachel and Gary Corbett at the forefront of that upward trajectory.

“I started looking around and discovered that the world record for e-bike riding was only just over 16,000km which was set by a German who circumnavigated Australia in 2012.”

It seems Rachel and Gary couldn’t have chosen a better time to showcase the capabilities of power-assisted bikes. Many said they couldn’t do it; many said they specifically couldn’t do it riding e-bikes, but the idea was to not only prove people it could be done, but to show that e-bikes have the potential to open up a whole new world to a group of riders who otherwise might not turn the pedal again.

Gary Corbett, 60, is an experienced cycle tourer, having ridden around Europe a number of times. He’s even penned two guides about cycle touring, combining his passion for riding with nearly 40 years of expertise working as a career journo.

Ready for another adventure, Gary’s research into e-bike technology led him to the conclusion that they were not only a viable way of touring long distance, but that they were the key to enabling himself and his wife Rachel to experience the road together — and to smash a world record along the way.

And strangely enough (for Gary) Rachel took no convincing at all. Rachel, 57, is a primary school teacher. Together the Corbetts had been living in Thailand for some time but Rachel wasn’t enjoying her job, and Gary thought he had a solution.

“So one day when Rachel was on a very low ebb after she’d come home from work I said, 'come over and sit down and lets have a talk'. And I put it to her, 'why don’t we just throw it all in and go cycle touring on e-bikes for a year or more?'"

“And she didn’t even think about it, she just said 'yes!'"

Getting prepared for such a journey is a challenge in itself. They were always going to cycle in Europe though, partly because the infrastructure allowed them to, and because Gary had ridden the Loire Valley twice previously and had always wanted Rachel to see it, too. Securing sponsors in London, the e-bike world tourers got ready to embark. They would ride 2015 Haibike xDuro Trekking RX models equipped with the Bosch performance drive systems and 400Wh batteries. They would take two batteries each and switch over when one ran dry. The added assistance from their Bosch motors has allowed them to climb hills and push their luggage laden rides across terrain that would normally prove incredibly difficult on regular bikes, and in some cases impossible.

“It’s continuous. I find that a lot of people go 'oh look you’re cheating!' But you’re not because you can’t go anywhere unless you pedal,” Rachel exclaimed.

E-bikes do all the work for you.

It’s a statement we’ve all heard someone make, and largely it is due to the mainstream lack of understanding around the way that e-bikes work.

In actual fact e-bikes still require a lot of effort, especially when you are towing your entire life behind you and are averaging between 75 and 90kms a day. Bosch performance drive systems really prove their worth on the hills. Four modes allow Gary and Rachel to switch from Turbo mode – which effectively takes their effort and multiplies it up to 275% their own power – to Eco mode in an instant, which provides just 50% more power.

“It’s a real juggle between using the power that the e-Bike can provide and conserving power", said Gary. "The reality is that if we want to do the distance that we have set for the day, we have to put it in Eco and just grind it out.” It’s the potential problems that a lot of people seemed to focus on when the Corbetts first proposed the idea to others.

How will you charge the batteries?

What if you can’t find somewhere to camp?

What if you break down?

But rather than focus on what is difficult about something, the pair has developed ways to handle difficulties as they arise, and spend more time worrying about missing things as they speed through the countryside.

“We get to a situation and we look at each other and we say, ‘It is what it is.’ It’s amazing, when you take that attitude: everything does work out." See also: Tackling the heights together on a tandem bike

Covering over 9,700km in just five months, you would imagine that sometimes, things really don’t just work out. But on the whole they’ve been incredibly fortunate when it comes to tech issues and punctures.

“We rode for 7000km without a flat tyre and then one day we had three,” Gary said. That’s the way it goes sometimes, but a bit of know-how gets you a long way. Any major mechanicals they have faced, Gary has either managed to solve himself, or has been able to salvage parts from Rachel’s bike so that he can go on day rides and make up potential lost km – it’s only Gary’s bike that is doing the record after all.

For Rachel, this has been a bigger challenge than for Gary – well, perhaps at first it was. Rachel has travelled a lot, but hasn’t spent so much time in the saddle; riding is something she has warmed to over the last 9,000 plus km.

One of the big challenges, but also one of the greatest rewards, is being completely self-sufficient. The Corbetts stay in a range of accommodation, but they’ve become expert campers along the road, with their Haibikes towing Tout Terrain cycle trailers complete with everything from their tent to their laptops; spare batteries and camp cooker – in Rachel’s own words, “all we need is a patch of grass and a power point and we are set.” See also: Why you should ride with your partner

That kind of self-reliance goes along way, but occasionally even two people need a bit of help. Fortunately, help isn’t too far away in European countries — let’s just say that they stick out a bit from the bunch.

An Englishmen answering “yeah, mate!” to Gary’s school-French calls of “parlez-vous anglais?”... A bunch flying by waving and commending their “great kit!”... A young man helping them with their bikes and trailers down a precarious set of stairs...The countless local shop and home owners who let them charge their batteries while they shared a hot cup of tea....

Rachel and Gary Corbett’s experiences are testament to the unconditional kindness of curious people. They said it was about more than the world record attempt...

“Personally, I love setting out every morning and not knowing what’s going to happen that day…” began Gary.

Rachel cut in, “…And I’m happy when I know there is somewhere to put the tent up.”