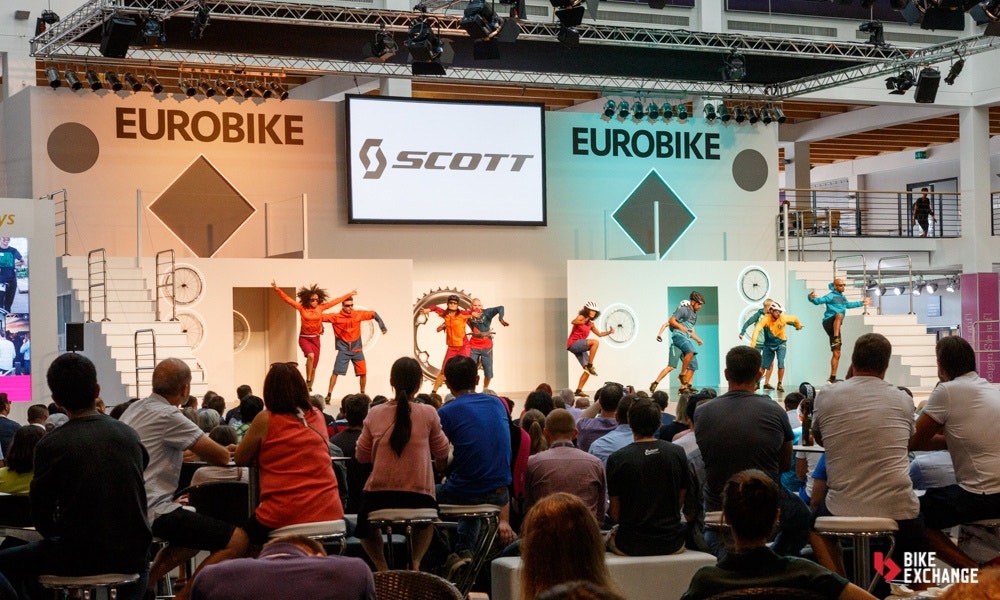 Eurobike is the mecca for everything that is new and cool in the cycling world. The annual trade show draws people from all over the world to see the latest and greatest technology and innovations from almost every cycling brand in the industry. Brands will typically launch new products and even display concept creations to an adoring audience of bike lovers.

If you weren't lucky enough to travel across to Friedrichshafen, Germany to see the show for yourself, we've got the next best thing. CyclingTips were at Eurobike covering the show live for three days, and we've compiled the best bits for you here. Eurobike is first and foremost a show for German dealers, one of the strongest cycling markets in the world. E-Bikes are a big thing, accounting for about 40% of new bikes sold in Germany, and so just about every major brand has a huge range of e-bikes to show. Cannondale was no different, showcasing its new E-mountain bikes. For those frequent travellers that need an easier solution to packing your bike, 'Bop Worx' have it. The green material you can see covering key aspects of the bike is designed for easy packaging of a bike for travel or storage without going over board on the foam or plastic. It provides a universal fit for any type of bike so regardless of your chosen discipline, your bike will be protected. Fair to say it looks a lot better than cardboard and plastic too! How do you make a V10 Santa Cruz even better? Add a splash of custom of course. The cow-painted bike was imagined by Steve Peat himself and certainly stands out from the crowd. There were many athletes scattered around Eurobike for demonstrations, signings and chats. Here Scott-Odlo riders Jenny Rissveds and Nino Schurter happily signed autographs and chatted to fans. Both riders had just won gold at the Rio Olympic Games, and Jenny's gold medal winning steed was on display for us to check out. Full Speed Ahead (FSA) have been producing groupset componentary for a number of years without having a groupset to call their own, but that all changed at Eurobike. FSA launched their new wireless groupset known as 'K-Force WE'. No points for guessing 'WE' stands for 'Wireless Electronic', and refers to the groupset being electronic and wireless, although only partial wireless as there as still cables connecting a battery to the front and rear derailleurs. The 'wireless' part of the groupset is the ANT+ encrypted communication between the shifters and the front derailleur which then acts like a hub to send a message to the rear derailleur via a cable.

No word yet on exact pricing or whether there will be additional groupsets to follow but this technology will certainly provide another option to the three main players. Parlee is going all-in with disc brakes. Its new TTR Disc triathlon bike has no provisions for rim brakes whatsoever. Triathlon isn’t regulated by the UCI, so it’s basically open season as far as technical innovation is concerned. Parlee has sheathed the disc brakes on its new TTR Disc with carbon fiber fairings in the ceaseless quest for decreased drag. The disc fairings on Parlee’s new TTR Disc look trick, but the company admits that it hasn’t done a specific wind tunnel study just on those parts to determine their effectiveness. While at the NorthWave booth CT spotted the new ‘Extreme RR’. Sitting at a 15/15 for sole stiffness, the top-tier NorthWave shoe uses a single ratchet mechanism to wrap the shoe around the foot. The mechanism actually pulls the wire from both directions for even tightening, while the material loops are subtly reinforced along the soft upper. Two foot beds are included to change the volume of the shoe, while the wrap-around nature of the upper is said solve the need for width choices. They’re claimed at 220g a shoe (EU42) and will retail for €369. Bar Fly had a number of new computer mounts at Eurobike, including this aero-minded model aimed specifically at riders using Cervélo’s aero road bar. Bar Fly modular system allows for a wide range of computers to fit, too. Unlike most other computer mount companies that force you to choose which interface you need, Bar Fly just includes all of them right in the box – meaning you also don’t have to switch mounts if you change to a different computer someday. Bar Fly will soon be adding an insert for Lezyne computers, too. Silca continues to expand, now with a more complete range of bags that includes a waterproof phone wallet (using a rolltop dry bag insert), a tyre repair case, a Boa-equipped seat pack, and a case for its new T-Ratchet compact torque wrench. Silca launched its T-Ratchet torque wrench via Kickstarter. The compact design uses a torque tube concept with graduated markings to indicate the applied loads. The handle can be configured in T and L setups to suit the desired task, too. Also coming from Silca are two new multi-tools, one with nine bits and the other with 13. Both feature stainless steel bits, aluminium side plates, and a handy magnetic dock for spare chain links. Argon-18 are deep down the path of rideable data-acquisition bikes and this concept bike is a look into what road bikes may be like. To explain it in this caption would be impossible, but that straw seen sticking out the head tube measures wind speed and the disc brake calipers are fully integrated. The future may not be as far away as you think.

Colnago joins the aero road game with the ‘Concept’. Sleek lines, and deep tube profiles are seen at every corner. Direct-mount brakes, sleek cable routing, stealthy seat post retention and more show the Italians are right on trend. Framesets are quoted at €3400. The Concept will offer an integrated aero bar and stem too. Unique is that the combo isn’t one-piece and so handlebar width/shape and stem length can be chosen independently. The stem uses a wedge system to hold the bar in place. Fi’zi:k is getting into clothing. The Link bib short range brings in the Italian brand’s saddle philosophy of matching a rider’s flexibility with saddle design. The men’s-only shorts are available in Snake (bad name for shorts…), Chameleon and Bull fits. The chamois and cut varies between the three based on how well you can touch your toes. The R1 model also happens to be extremely light, claimed at just 155g a pair. Giro previewed a new ultralight shoe at Eurobike called the Prolight Techlace. It uses the same Techlace closure concept as on the Factor Techlace that was launched last week, but in a dramatically pared-down form that weighs just 137g per shoe. The design still isn’t completely finalised, though, and Giro estimates the production version will be more like 150g per size 42 shoe. Stages Cycling’s new GPS-enabled Dash computer head is a surprise entry from the power meter specialist. The black-and-white screen is big and crisp, and the display is highly customisable. It can even be set up in portrait or landscape modes, with multiple on-board profiles to keep all your display settings at the ready. Prescribed workouts are clearly laid out on the new Stages Cycling Dash computer, and the display will guide you through as you go based on your power outputs. The whole process is designed to be very user friendly.

Stages Cycling’s new Dash computer is but one part of the puzzle, however. The company’s new Link software makes for a complete power ecosystem, including impressively easy-to-use training and analysis functionality, a full suite of diagnostic info for your Stages power meter, and cross-compatibility with other major apps such as Strava. Reynolds has updated its aero profile for 2017, claiming the new 28mm width design saves 3-4W compared to the previous iterations (conditions tested unknown). All the rims are tubeless-ready and with a 19mm internal width. The wheels are rolling on US-Made Industry Nine hubs with a fast 6-degree freehub pickup. The 46mm depth is Disc only. The 65 is available in both rim and disc. While the deep 80 is rim brake only. Plenty of work has gone into that rim brake surface too. All options should be available by January. Canyon were teasing what the pros have been testing. First was the Ultimate CF SLX Disc as tested by Katusha. Next was the Canyon Aeroad CF SLX Disc (pictured) as tested by Movistar. Note the Campagnolo Disc brakes! Markus Storck has entered into an exclusive partnership with fabled British car company Aston Martin to produce a limited run of the new Fascenario.3. Just 77 of these “One of Seven” special editions will be produced, each with a premium build kit and unique paint. The third generation of Storck’s flagship Fascenario frame now sports a more aerodynamically tuned shape with truncated airfoil profiles that supposedly maintain the label’s storied stiffness characteristics. The fork blades on Storck’s new Fascenario.3 are spaced extremely far apart, which Markus Storck says yields huge aerodynamic benefits, especially with the modern crop of ultra-fat rims. The huge chainstays on the new Storck Fascenario.3 loop cleanly around at the dropouts into the seatstays. The rear-entry dropouts are typical for Storck road frames. Enve has a new wheel for the modern disc brake road bike. The SES 4.5 AR Disc is designed to be aerodynamically optimised with 28c tyres. The rims are truly disc-specific and are said to be about 50g a piece lighter than an equivalent rim brake model. Tubeless ready, these rims will be equally at home on high performance gravel bikes, although the key focus is wide-rolling road. Wheelsets using Chris King hubs are said to weight around the 1,550g mark. Seems the age of compromise-free disc setups is upon us. New Enve SES 4.5 AR Disc rims measure a massive 25mm internal! Enve have done its research here, 28’s are the fastest choice for these rims.

Pricing wasn’t available at time of publishing. All photos courtesy of David Rome and James Huang

This article is a modified version of that originally published on cyclingtips.com Check out the best of Eurobike from Day 1, Day 2 and Day 3.