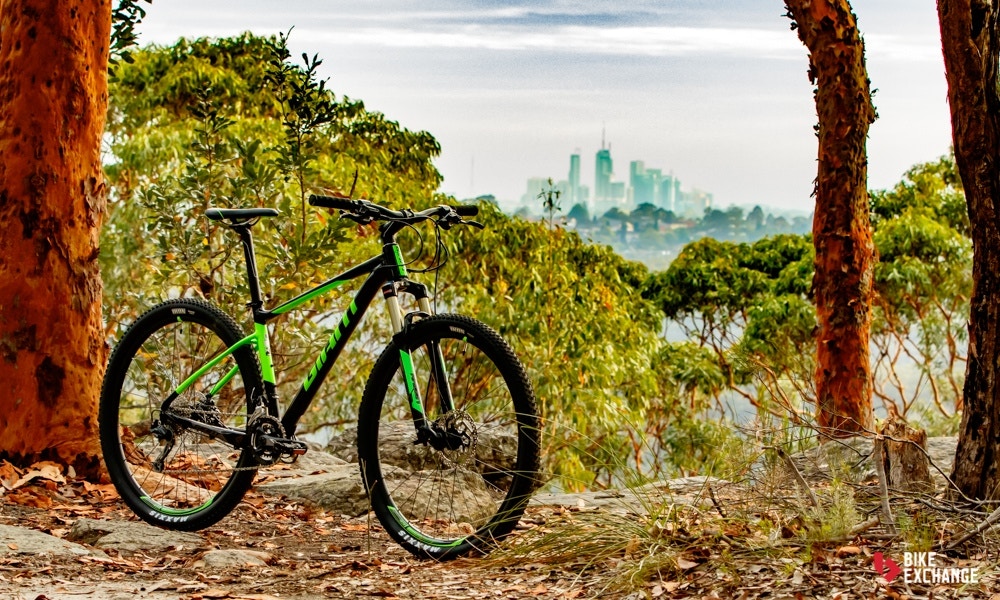 New model for 2017, the Fathom sees Giant return to the 29er wheel. Big hoops and big value, see what we think of this intermediate hardtail.

It was 2013 when Giant made a big announcement that it believed 27.5in wheels, the middle choice, was the goldilocks of mountain biking. In a time where the big 29er hoops were winning in sales, it was a move that was tough to fathom (intended).

Since then, the world’s largest bike manufacturer has stood firm with its choice of 27.5in wheels for all disciplines of mountain biking – until now. 2017 sees a number of cross-country bikes being offered in the larger, 29er wheel, and such an example is the all-new intermediate hardtail, the Fathom 29er.

The Fathom takes off from what the long-standing XTC alloy platform left, it’s a bike priced for the beginner to intermediate rider and designed for cross country-type mountain biking. It’s the type of riding that most of us do, and the Fathom is built to get you on the trails, get your heart rate up, ride some stuff that makes you smile and return you home safely.

We tested the new Fathom 29er 2 on some local cross country loops to see if Giant’s previous withdrawal from the big wheels has meant a loss in experience, or just a chance to re-consider things. The Frame and Build

Sitting at the center of the Fathom is a new aluminium frame platform using Giant’s ALUXX SL alloy. The frame borrows a number of design cues from the company’s more expensive carbon fiber options, with tube profiles that were once thought impossible in metal.

Such changes have all happened in the past ten years, with Giant one of the leaders in advanced aluminium bicycle manufacturing. They use a technology known as ‘fluid forming’ to manipulate tube shapes under immense liquid pressure. This results in a frame that’s better able to withstand twist, be more compliant, offer improved strength and save weight all at the same time when compared to the use of standard round tubes.

Further to this, the frame is using butted tubes, with the wall thickness changing along its length. We explained tube butting in more detail previously, but effectively it helps to create a frame that’s both stronger and lighter. The Fathom’s frame is packed full of features, with such premium additions as an Overdrive2 headset (aka tapered head-tube), Powercore bottom bracket (aka press-fit), internal cable routing and a rear brake mount that’s neatly tucked within the rear triangle. Further to this, enormously tall, yet narrow, chainstays swoop spaciously around the 29er tire, and are offset to each other (asymmetrical) to best handle to different forces that a frame experiences from the chain being on the right. It’s all a very clean setup that’s then nicely coated in a glossy green and black paint.

One small tidbit of the frame is that the internal cable routing spits out the front derailleur cable at the perfect place to then receive crud from the rear tyre. If you ride in mud or wet sand, you’ll certainly want to factor in the occasional cable replacement to keep things working right. Looking past the frame and it’s the front suspension fork that follows in importance. Here, Giant has gone with a brand that offers less desire, but amazing value. The 100mm-travel SR-Suntour Raidon fork is packed to the brim with features, including an adjustable air spring (BYO shock pump), external rebound control and a firm lockout. The air spring, which allows finite and simple tuning of how firm or soft the suspension is specifically to you, is impressive on a bike with the Fathom’s price and is surely a stand-out feature. To give you an idea of how unexpected air suspension is on a bike of this price, it was a noted feature on the recently reviewed, and more expensive, Norco Charger 9.2 too.

Even more impressive is that the fork makes use of the frame’s tapered steerer tube, whereas other bikes of this price often sneakily use a heavier and less-stiff fork with a straight steerer tube in an effort to save cost.

One sign of the price, however, is the quick release wheel axle at the base of the fork. The system works, but more premium models use large diameter thru-axles in order to improve stiffness, and therefore steering at the front wheel. Thankfully the fork’s 32mm diameter stanchion construction is otherwise a stiff one, and the lack of a thru-axle is far from a deal breaker on this bike. Third in line of what matters most is the rolling stock. Here the large 29er wheels are expectably basic and without premium features. These feature aluminium double-wall rims that sit at a fair 25mm external width.

The hubs are similarly basic, yet fully functional. They carry a fair bit of weight but should prove durable with occasional servicing. These are laced with 32 stainless steel double-butted spokes to the rims. The wheels are shod in confidently wide Maxxis Ikon 2.20in wire-bead tires.

Looking to what most base their bike buying decision on, the drivetrain and brakes are a solid mix of known brands.

With nine-gears at the back, and two at the front, the Fathom 2 offers a modern mountain bike gear range. With a 24/38T front chainring combination matched to a 12-36T cassette, it’s one that’s best suited to off-road use and is ready to tackle the steepest of climbs.

The mix of Shimano Alivio and Deore drivetrain and brake components are all perfectly suited to regular off-road use and a nice improvement over what many cheaper bikes come equipped with. The FSA crankset is a quality item that features a modular chainring system that allows plenty of future gearing options, including clean 1x setup. It’s closely comparable to a Shimano Deore crankset in weight.

The angles and measurements of a frame often define how a bike rides more than its features or components. Here, the Fathom errs on the side of recreational riding that pushes you into an upright position.

While many will find the relaxed position extremely comfortable, it’s not as favorable for fast-charging cross-country riding, where you ideally want your center of gravity centered, low and not floating high. Dropping and even flipping the stem to a lower position goes a long way to fixing this for confident descending, but the bike can still feel slightly cramped and upright when looking to tackle steep ascents. With this, the front wheel tends to wander a little on the steepest of climbs and so you must drop your elbows and pull your upper body low to keep the steering on track. The main cause of this twitchy and cramped feel is due to the narrow 680mm-width handlebar. A few years ago these bars would have been suitably wide, but they feel nervously narrow by today’s standards. A bar just 30mm wider would help with leverage of the bigger wheel and to stabilize the handling somewhat. If you’re going to change to a wider handlebar (you should), then you might as well also swap to a flat or low-rise bar that helps to keep your weight closer to the front wheel.

Looking past the somewhat changeable upright position, the handling is otherwise a huge improvement to the last Giant 29ers we rode. Here, the head tube angle has been slackened, and the rear end shortened (now 442mm). Both changes result in a bike that feels more natural on the trail, easier to maneuver through tight singletrack and with more confidence in tackling technical obstacles. Where Giant’s previous 29ers felt dated with being overly long, making it feel cumbersome, and yet with twitchy front steering, the Fathom is modern and competitive in its nature.

Performing without-fuss on rough terrain, the SR-Suntour Raidon is an impressive fork for a bike of this money. Even with its limited 100mm travel, it soaks up both big and small bumps with a smooth action and well-mannered control, and the lockout is great for when the terrain turns smooth. The fork’s air-spring is also a helping factor toward the bike’s 12.95kg (without pedals) complete weight, something that helps the Fathom to feel nimble when compared to cheaper 29ers. However, getting the fork to perform at its best takes patience, as no suggested setup guide is given. This forces you to set the spring’s air pressure based on how much the fork depresses under your body weight (sag). Typically an O-ring is given to help measure this, but there’s no such luck here. We overcame this by using a zip tie around the fork leg and measuring 20mm of sag under our weight, but it’s a lacking solution compared to the provided setup guides and sag O-Rings given by brands such as RockShox.

Stiff under power without sign of flex, the frame gave us little to complain of. And while it’s not a smooth ride, the low placement of the curved and flattened seatstays stops it from transmitting every deviation in the trail. Its comfort is a subtle improvement over the previous generation of Giant’s aluminium hardtails.

Beyond the capable suspension and quality frame, the big wheels and generous-width rubber do plenty to soothe the ride and make for a ride that holds its momentum well. The Maxxis Ikon tires offer a fast rolling tread that’s well behaved in a mixture of conditions. Though those that ride overly wet or loose trails may want to upgrade the front tire to something with a more aggressive tread. Shifting is smooth and consistent, while the Alivio shifters offer numbered gear indicators to easily see which the 18 gears you’re in. The Deore Shadow rear derailleur offers decent spring tension for chain control, however, a clutch-equipped version would provide additional chain security and less noise over rough terrain. At the very least, you’ll want to fit either a neoprene or rubber chainstay protector to soften the noise of the chain slapping the frame. The Shimano M315 hydraulic disc brakes do far more than their price suggests. They offer a level of control backed by power that is often only found in more premium brakes. A larger 180mm rotor is fitted to the front wheel for additional stopping power and heat management.

Basic alloy-caged pedals are included, but they’re certainly better suited to casual cycling than mountain biking. Swapping these out for a wider platform pedal or even clipless pedals (special shoes needed) would be a great upgrade before taking the Fathom off-road. The other contact points, Giant’s own saddle and grips, should prove nicely comfortable and up to the task of long rides exploring trail networks.

While we maintain that more experienced riders may want to seek out a bike that’s less upright, the Fathom 2 remains an impressive pick for anyone looking to join the booming sport of mountain biking and do it in comfort. With its narrow handlebar it’s not perfect, but its remarkable value should leave money spare to make whatever changes you feel necessary. **The 2017 Giant Fathom 29er 2 is available in sizes Small, Medium (tested), Large and Extra-large. Our sample read 12.95kg on the scales (without pedals and bottle cages). The MSRP $920. The Fathom 29er 1 shares the same frame and has a MSRP of $1240 – it improves on the Fathom 2 with a SRAM 1x11 drivetrain, improved fork with thru-axle, lighter wheels and a better brakeset.

For in-depth help of where to start in your mountain bike research, read our complete guide to buying a mountain bike.**