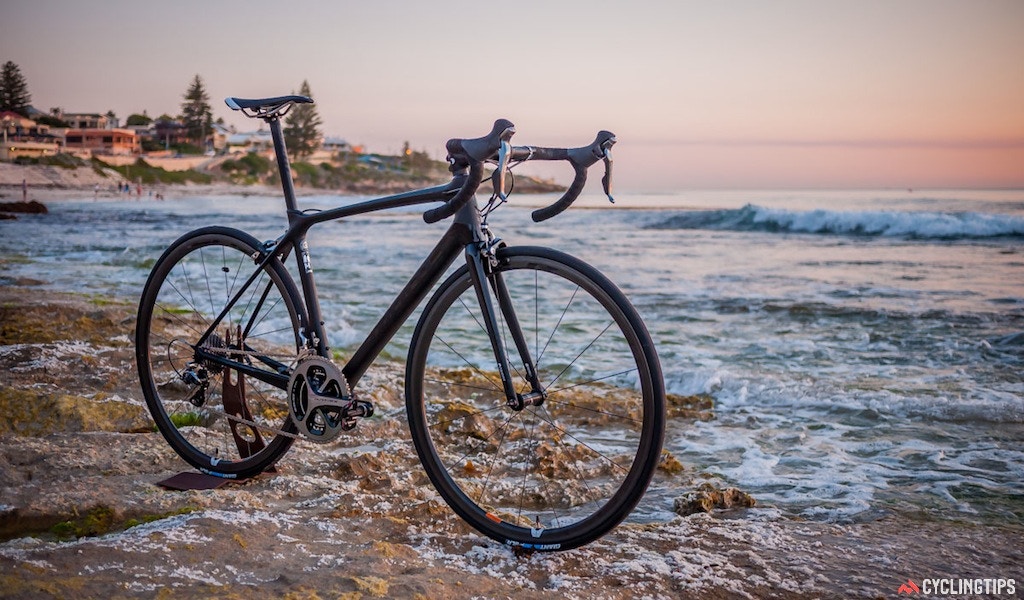 A decade has passed since Giant produced its first TCR Advanced road bike. Conceived as an all-carbon frameset built around the company’s TCR (Total Compact Road) concept, it was manufactured entirely within Giant’s Taiwanese factory. Giant went so far as to start weaving its own carbon fibre cloth to ensure the consistency of its starting materials.

Giant continues to undertake every step of construction of its carbon bikes and they have redesigned the TCR Advanced platform for 2016. The frameset has been slimmed down for a significant weight reduction however the starting materials, layup, and stiffness remain unchanged. In this way, Giant was able to increase the stiffness to weight ratio of the TCR Advanced for 2016.

One other major refinement was the introduction of a new carbon clincher wheelset to TCR Advanced Pro and SL bikes. Dubbed the DBL (Dynamic Balanced Lacing) WheelSystem, there are four different models: two “Climbing” wheelsets (SLR 0 and SLR 1) with a 30mm full carbon rim, and two “Aero” wheelsets (SLR 0 Aero and SLR 1 Aero) with a 50mm carbon rim.

Some of the features of the DBL WheelSystem include the lacing strategy for the rear wheel that anticipates a difference in dynamic load for pushing and pulling spokes. Four wheelsets served as benchmarks for the DBL WheelSystem—Zipp Firecrest 202, Bontrager Aeolus 3 D3, Roval Rapide CLX 40, and ENVE Smart 3.4—and Giant set out to best them all on the basis of weight, stiffness, aerodynamics, and braking performance. And according to their testing, they did. For this review, I spent a few weeks riding the TCR Advanced Pro 0 that retails for $5,500, courtesy of Giant.

Giant’s TCR Advanced frameset retains all of the features of the previous iteration, including Giant’s “Advanced Grade Composite” that employs T-700 carbon fiber, an OverDrive 2 head tube and fork steerer, and a PressFit BB86 bottom bracket.

The ongoing presence of OverDrive 2 signals Giant’s faith in 1.25 inch fork steerers but it does limit aftermarket stem choices for the buyer. Giant continues to offer its own stem range to suit at a few different pricepoints, but there is only one option for the stem angle (±8 degrees). The latter is an important consideration since the TCR Advanced continues to offer a reasonably aggressive race-oriented fit, as shown in the table below:

The geometry of the new TCR Advanced is essentially identical to previous versions, with a 5mm reduction for the top tube length of size M the most significant variation.

The TCR Advanced has pleasing lines and a fine sense of proportion. The tubing is rounder and smoother than the previous version, so now it looks like it was poured rather than carved. It is also visibly lighter, however the shadowy black-on-black finish robs the bike of some of its identity.

The TCR Advanced Pro 0 is equipped with Shimano’s 11-speed mechanical Dura Ace 9000 groupset and a KMC chain, while Giant supplies the rest of the build with its SLR 0 DBL WheelSystem, 23mm P-SLR1 tyres, and Contact SL handlebars, stem and saddle. It is worth noting that the SLR 0 wheelset has a full carbon clincher rim that is 30mm tall and 23mm wide with a 17mm bed. The rim is tubeless compatible with a brake track that is rated to withstand 245°C. The hubs carry Giant’s branding but the rear hub uses DT’s star ratchet mechanism. DT also supplies its Aerolite and Aerocomp spokes for the build with internal nipples.

For those buyers that want to make a greater concession to price, there is the TCR Advanced Pro 1, which retails for $3,200. This model is supplied with an Ultegra 6800 11-speed mechanical groupset, KMC chain, and the same Contact SL handlebars, stem and saddle as the Pro 0. Surprisingly, this bike also has a carbon wheelset, the SLR 1 DBL WheelSystem, which shares the same rim as the SLR 0 wheelset on the Pro 0 but uses cheaper hubs and spokes for a small weight penalty (<100g based on claimed weights). The TCR Advanced Pro 0 is available in one colour only (black) and is backed by lifetime warranty for the frame, 10 years for the forks, and 1 year for the components and paint. For more information, visit Giant. From the moment I wheeled the TCR Advanced Pro 0 out of Giant’s warehouse, I could tell it was light and stiff. The question was, how much, and did it come at the expense of comfort and ride quality? After all, the previous version offered a very smooth ride with a ‘Goldilocks’ blend of traits for broad appeal.

The new TCR Advanced casts aside any consideration for Goldilocks. Giant’s claims of improving the stiffness to weight ratio of the bike are well founded and the result is a bike that is more responsive and race-oriented than the previous version. Indeed, the new TCR Advanced defies its branding (and all of the expectations that normally go with it) to challenge the best efforts of race-bred brands with much stronger pedigrees.

That doesn’t mean the bike goes beyond what has been achieved by those other brands. At best, Giant has managed to match them, but the new bike trumps the rest on the basis of affordability. As for current owners, the temptation may be too great: the bike is at once new and familiar; that it actually delivers a tangible improvement in performance will no doubt seal the deal for many. To explain: the new bike is easy to accelerate because it is so stiff and light. The low-profile carbon wheelset delivers on expectations with more of the same, adding to bike’s agility, especially on the slopes. I found the bike was especially lively when I was out of the saddle, inspiring me to attack the climb with extra aggression.

The new TCR Advanced gives up some of the comfort and smoothness that defined the last version, but it’s only a small amount. There was some vibration and chatter on rough roads, but overall, I had to marvel at how mild it was compared to how responsive the bike was elsewhere. It’s a trade-off that I expect most riders (excluding novices) will be willing to make.

The TCR Advanced was stable and sure-footed under most circumstances. There was some oversteer at low speed but it disappeared at higher speeds. This bike wouldn’t be my first pick for a technical criterium, but if there was nothing else in the shed, I would still be able to contest the event. I can’t predict what this bike will be like under a heavier and/or more powerful rider, but it was stiff enough for my sprinting efforts.

Giant’s SLR 0 carbon wheelset provides the clearest indication of Giant’s intentions for the TCR Advanced Pro 0. The low profile keeps the weight down while ensuring versatility, so the bike is well suited to long, hilly rides in any weather. I found that braking in the wet and dry was comparable to other carbon wheelsets, but buyers should consider whether they are prepared to make extra allowances for the carbon rims (ie. take extra care when braking on long descents). Overall, the TCR Advanced Pro 0 exudes class, thanks in part to the quality of the wheels and the Dura Ace groupset. The tyres, saddle and handlebars served their purpose without fail or complaint but none could rival my personal favorites. These are obvious points for personalization, and do nothing to detract from the quality of this bike.

It is clear that Giant’s overhaul of the TCR Advanced has produced more than just a few cosmetic changes. Yes, the frameset is rounder and skinnier but the bike has attained a new quality, evolving from an everyman’s kind of bike into a lightweight and responsive race bike.

Giant’s new TCR Advanced Pro and SL bikes are all equipped with carbon wheelsets, a sure sign that the technology is trickling down from the upper end of the market. Now buyers that are prepared to spend at least $4,000 on a new bike can get an all carbon clincher for everyday use as a stock option. While it is difficult to predict what kind of effect this will have on the market, it will no doubt influence the expectations of consumers.