Review of the Kestrel Legend 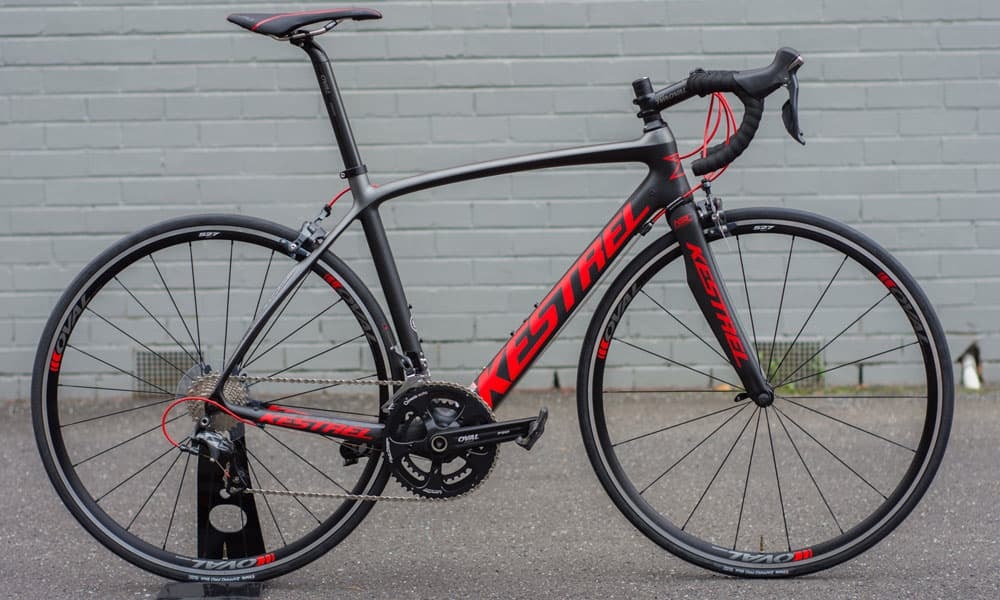 The Kestrel Legend provides the decerning buyer with an aggressive fit, 22-speed Shimano Ultegra drivetrain, a lightweight frame and pleasing aesthetics at a price point well below what you might think. There's a lot of bike here for the price tag, but is it right for you? Read on to find out.

Who’s it for: The athletic all-rounder, someone that rides hard and races occasionally but doesn't want to break the bank.

What we like: Aesthetics, race feel orientated machine without the price tag, climbing out of the saddle.

What we don’t: Very tight geometry, handling not as polished as we had hoped for, careful of the sizing.

The Legend from Kestrel comes in two frame options, the 'Legend SL' and the 'Legend'. The Legend SL (SL stands for 'Super Light' ) is the super lightweight performance road bike, the frame weighs 780grams and is made up of 800K High Modulus carbon fiber. The Legend SL is the lightest bike Kestrel has ever made and raised a few eyebrows when it was first released in 2013.

The Legend is not too far removed from the Legend SL, constructed from Kestrel's 'Enhanced Modulus Hybrid (EMH)', a combination of 800K and 700k carbon fibers which adds a little to the frame weight and reduces the stiffness ever so slightly. Most people would be hard-pressed to notice the difference between the two frames, the Legend is still considered a lightweight road option at a much more affordable cost. As well as being a lightweight bike, the Legend frame is designed to offer something in the way of stiffness and comfort. The thick downtube and large bottom bracket aim to improve power transfer, while the 'uniquely, asymmetrically shaped seat stays and chainstays' along with the rear 'proprietary Kestrel H-stays are designed to improve lateral stiffness and thus power transfer, while also supplying vibration dampening.'

The Legend comes in a wide range of sizes from the diminutive 48cm frame right up to the gigantic 62cm frame. Rather than simply scale the size of each frame, Kestrel says each frame 'has unique tube lengths, diameters, shapes, and carbon layups to produce the best possible ride quality for every size rider.' The carbon lay-up of the Legend is also said to be very similar to the Specialized Tarmac whereby the top tube and down tube are wrapped around the head tube. As mentioned above, the Legend's headtube is relatively short and tapered which Kestrel say 'enhances lateral stiffness for excellent steering precision.' The Tarmac is widely considered one of the best handling road bikes on the market which suggests the Legend may handle equally as well. The Legend fork is created via a slightly different process to the frame. The fork is also made of Kestrel's 'Enhanced Modulus Hybrid (EMH)'' carbon but uses a foam mold instead of a bladder 'to reduce weight yet increase rigidity, particularly in the fork crown.' It's clear to see Kestrel have placed a high priority on getting the handling and aggressive feel of the bike right.

The total weight for the Legend with Ultegra mechanical is 7.73kg, but it could easily get down to 7kg (or perhaps below) with a different set of wheels, tyres and carbon handlebars instead of the Oval Concepts 310 ergo alloy ones that come standard. Not bad for a bike that retails for around AU$2,500. The drivetrain for the Legend Ultegra is, as the name suggests, mechanical 22-speed Shimano Ultegra in the modern day ratio. At the front is a 'pro-compact' or 'mid-compact' set up 52/36T, and on the back an 11-28T cassette. The gear ratio is a brilliant set-up for almost any kind of terrain or profile, and Shimano Ultegra is a resilient drivetrain with high-performing pedigree. There wouldn't be many bikes with a Shimano Ultegra drivetrain at this price, most would be equipped with Shimano 105 or at best a mix of 105 and Ultegra.

Kestrel's sister company Oval Concepts provide the crankset, handlebar, stem, bottom bracket, seat post and wheelset. The benefit of having a partnership like Oval and Kestrel is the components look like they are meant to be on the bike, not just retrofitted pieces from a build kit. The nice red decals from the frame follow through on the wheelset, cables and handlebars, and the dark grey finish of the crankset and seat post match in with the 'Satin Carbon' frame colour.

The wheelset is Oval Concepts entry level 527 clincher. The 527 clinchers weigh approximately 1,720 grams and come with an aluminium rim, 2.5mm-butted aero spokes with aluminum nipples and sealed cartridge bearing hubs. Paired with Vittoria Zaffiro Pro Slick 25mm tyres, it's clear to see where some immediate weight savings could be made. The Legend looks very clean and the matte carbon finish gives off an instant impression of class. As mentioned above, flashings of red are visible throughout the components, right down to the smallest decal on the Oval Concepts 527 wheelset. The colour choice is well considered as it's not going to age or look tired when next season's model is released. And we all know that red makes it go faster.

Glancing at the Legend from the side, the tight geometry is obvious and it looks like a nice little package. The wheelset gives away that it isn't the top shelf offering from Kestrel, but put a deepish set of carbon wheels on and you could convince the vast majority of onlookers. What Kestrel says about the Legend

The Rider: The Legend is for those seeking a top-level race bike who crave speed, but who don’t want to sacrifice ride quality to get it; it’s perfect for stage racers, climbers, and riders who include winning in their idea of a good ride — whether it be a PR at the top of the climb or the final throw at the line of the National Road Championships.

The Bike: What makes a Legend? The lightest frame ever produced by Kestrel at a mere 780 grams and one of the lightest carbon road bikes on the market. It’s designed to be stiff and efficient, yet not an ironing board — compliance in just the right places to produce an agile, aggressive, while still comfortable ride.

As mentioned the fit is very aggressive. I normally ride a 54.5cm frame and for the test I was on a 55cm frame, but could definitely have done with going up a size to a 57cm. I certainly wasn't stretched out, but the front is low thanks to the short headtube, and being on the slopping drop handlebars gets you even lower. As mentioned, I normally ride a 54.5cm frame along with a 110mm stem. With the handlebar height and seat position the same as my bike, I would need a 140mm stem to achieve the same position on the Kestrel. The 55cm Kestrel Legend frame comes as standard with a 100mm stem but might be worth putting some money aside just in case you run into the same issue. Obviously that's an easy aftermarket fix, but going a size up would have required less tinkering.

My regular ride is an aero bike so I did notice the Legend doesn't carry speed all that well. By comparison it took a lot of work to keep the speed high when sitting above 40kph. Accelerating and getting up to speed was no issue at all but maintaining it felt like more work than it should have been. Having said that, the Legend is not built to be an aero bike so this is no surprise.

Standing up out of the saddle and climbing was a delight. The bike felt so nimble and light riding up steeper grades, it really was the highlight of the test. This was somewhat surprising given the bike weighs approximately 7.7kg, but certainly felt much lighter than that. It makes me wonder how good the Legend SL would be on a steep mountain pass?!

If the climbing was the highlight of the test, the handling would have to be the low light. The handling wasn't as sharp as I thought or hoped it would be. I dropped it tight into a few corners and it was a real struggle to hold an aggressive line and I felt myself drifting. I'm not sure if this was in part because my expectations were so high, but it was certainly an element I thought the Legend would excel in given the short headtube and aggressive geometry.

Speaking of the aggressive geometry and short head tube, I think a more compact set of handlebars would be appropriate. The trailing end of the handlebar continues to slope downwards which put me into a super aggressive position. Some will absolutely love this, but it was just a little too much for my back and hamstrings to handle. Maybe on a larger frame size this could have been a positive to be able to get so low and aero.

Despite the narrower 23mm tyres, the rear of the bike felt good and I didn't notice any excess vibration coming through the seat stays. The proprietary Kestrel H-stays performed very well in this regard, I'd be very happy to put in many long km's with the Legend's rear triangle configuration. Add this to the highlights list of the bike.

In the front I did notice a fair amount of road buzz. With clearance for wider tyres, I can't help but feel such a change would greatly help here.

With an Oval crankset, the normally quiet and reliable Shimano Ultegra drivetrain was a little slow to respond to gear changes at front. Obviously groupsets are built to work as a complete unit, so whenever they are broken up or have components switched out in favour of another, it's no surprise the performance isn't as flawless as it might be. The drivetrain did perform well enough and I am a fan of the straight Oval crank arms.

All in all, the Kestrel Legend performed very well and bats well above what its price tag would suggest.