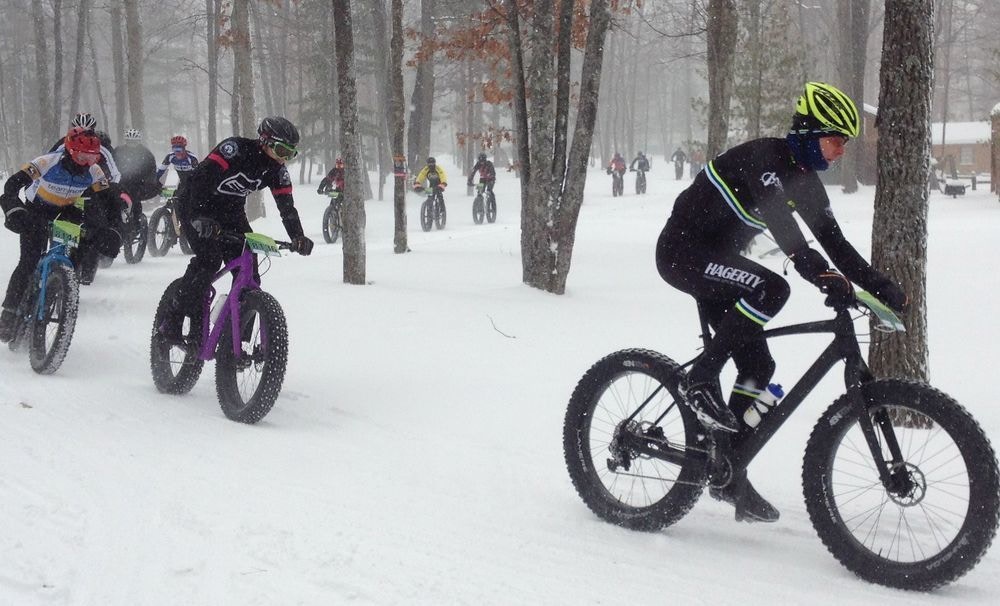 Normally an 18km bike race completed in just under 90 minutes wouldn’t raise many eyebrows… But when you consider this race was done at minus 22 degrees (minus 37 with the wind chill) then it starts to get interesting. Add to that a blizzard and a FAT bike and it becomes epic!

Oh, and did I mention the winner of this bike race has Type 1 diabetes…?

Justin Morris, who at the age of 10 was diagnosed with Type 1 diabetes, has never let that obstacle prevent him from accomplishing his goals. Overcoming challenges is something to which Justin has become accustomed; “in life you have to try things and see what happens.”

Justin has recently returned from Michigan US, fresh off his victory in the King Vasa Fat Bike Race, up against some of the most brutal racing conditions imaginable. To give you an idea of what Justin was dealing with:

His feet were covered with two pairs of socks, plastic bags, MTB shoes and neoprene shoe covers – but when the paramedics took off his shoes at the end of the race his toes had been replaced with blue icy poles. It was a warning that any more time out there, and the finish would have resulted in a trip to the hospital to cut off a few frostbitten appendages.

Suffering is nothing new to the former Pro-cyclist, who would regularly clock up 30 hours a week on his bike and has undertaken some of the more extreme events available to bike racers.

In complete contrast to his victory in the snow, in 2011 Justin competed in the Croc Trophy, a 10-day MTB event held in Far North Queensland with hot and humid conditions. One memorable stage measuring 202km was completed in 43 degrees and 100 per cent humidity.

Such was the harshness that Justin began to hallucinate towards the ‘end’. Having been on the bike for almost seven hours, he thought he could see one of the final trail markers up ahead, surely the 5km sign… But as he got closer, that oasis disappeared only to reveal a sign indicating 35km to go! At that point Justin jumped off his bike, threw it to the ground, sat down and almost cried…! It was beyond the level of suffering. True to form though, he got back on his bike and finished the race. So how did this former pro-cyclist, native to Australia end up riding in Michigan through a blizzard on a FAT bike?

A love story, of course.

Justin’s now fiancé, very soon-to-be wife Morgan lived in Michigan, so Justin moved there to be with her. Luckily for him the town has a largish cycling presence despite their questionable weather, not normally considered conducive to cycling. The solution… Summer is spent on the MTB and winter, the FAT bike!

Imagine if you will – your normal weekend bunch rolling out on Fat Bikes in minus temperatures with snow a-foot. The regular “Friday Night Lights” ride a staple for the locals.

But let's get back to the race.

Justin was apprehensive given the forecast, so he called the organisers asking if it was still going ahead, to which they responded in an upbeat tone, “starts at 2pm”. A small concession was made to shorten the race from 36km to 18km, but going full-gas at a little over 12kph through deep, soft snow hardly seemed like much of a short-cut. At the start of the race the intention was to hold onto the first handful of guys and ride in their wheels, as that compacted the snow and made it much easier.

Approaching a hill Justin hit it hard to break away from the group, but now he was riding solo and having to churn through the soft snow, slowing him down to the point of having to get off the bike and push it along! This trail he was now creating for his pursuers meant the race was quickly brought back together. The unrelenting conditions caused Justin to crash near the finish, opening a gap to the leaders. Shaking it off, Justin was forced to go full-gas to catch back up with the lead group, blowing straight past them, soloing to the finish line and taking the victory.

The sense of relief to finish the race was overwhelmed by the intensity of the pain Justin was now experiencing in all of his extremities. Apparently the pain was a ‘good’ thing according to the paramedics – it meant you could feel the blood warming up. If you weren’t in pain… then there would be a problem. Justin has officially retired from racing now and is looking forward to finishing his BA of Psychology and Education, which was put on hold in the early days to pursue his professional cycling career. He is now a mentor to student athletes at Macquarie University and later this year will marry his other long time love Morgan back in Michigan. He is still involved in cycling with the NRS team GPM and through the years his love of the sport has not wavered.

According to Justin, the best stories come from events that at the time involve suffering or hardship of some kind – something that you can look back on and be proud of the way you got through it. Retrospectively the greatest happiness comes from overcoming the greatest pain.

Justin has some great advice for others faced with challenges. Find something or someone to believe in and that will keep you going in the darkest of times… Justin works through tough times by repeating the mantra from a well known children’s book his parents used to read him about a little engine that could – “I think I can, I think I can”…

“In life we have to try things and we will face many challenges, but they are always just that; challenges NOT barriers”.

Cycling is a great metaphor for life and no one embodies this more so then Justin Morris.

Check out more great reads on Everything Bike here