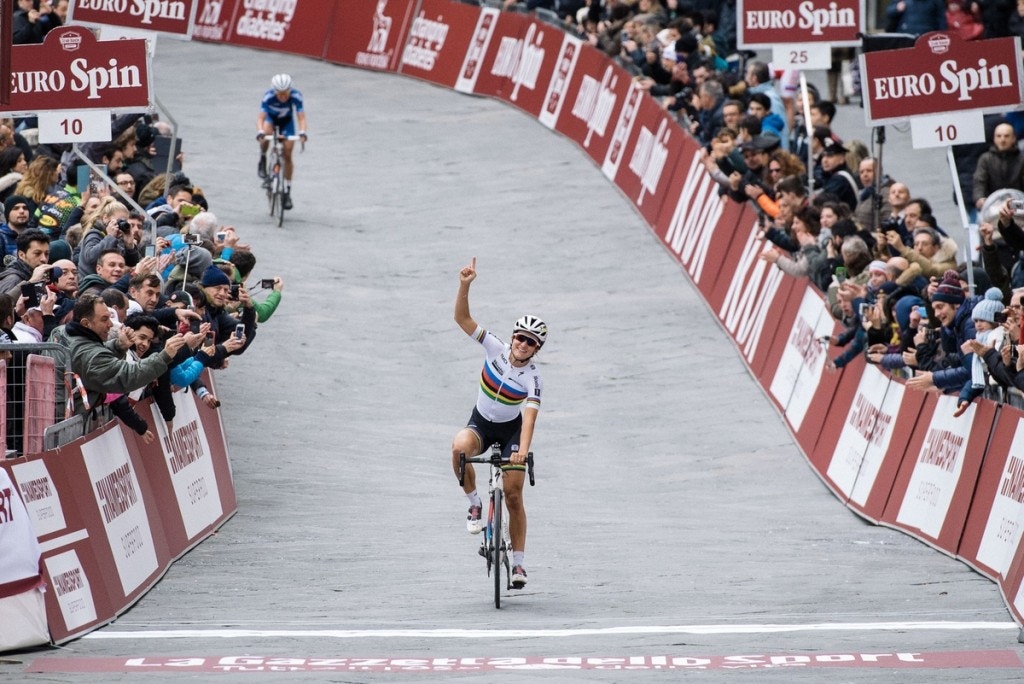 The Strade Bianche doesn’t need exceptional weather circumstances to be an heroïc race as last year’s sunny edition proved, but with the predictions calling for showers, wind and possible thunderstorms for today, cycling fans across the world looked forward to the gravel road race turning into something epic. Plus with this year’s Strade Bianche being the first event in the inaugural Women’s WorldTour, the excitement and tension in the peloton rose to considerable heights before the start.

Twenty-three UCI teams sent their riders to Tuscany, forming a peloton of 136 riders in total. Boels-Dolmans were in Siena as the team to beat with among them Lizzie Armitstead, who showed pure dominance at the Omloop het Nieuwsblad last weekend, Strade Bianche’s 2015 winner Megan Guarnier and dark horse Nikki Harris in the line up. Harris, of course, is well accustomed to off road racing as she’s predominantly a cyclocross racer. All of the top five UCI teams brought a top favourite for this race, including Elisa Longo Borghini (Wiggle High5), Annemiek van Vleuten (Orica-AIS), Ashleigh Moolman (Cervélo-Bigla) and Rabo-Liv’s Anna van der Breggen, who was supported by a strong team consisting of potential winners Kasia Niewiadoma and Pauline Ferrand-Prevot. It promised to become a thrilling, action packed race.

Twenty minutes into the race, rain drops did start to come down gradually, and the nervousness in the peloton was apparent with a small crash happening early in the race. Some riders were still chasing back to the peloton when it reached the first gravel section. A bigger crash occurred just as the peloton left that gravel section, with Cylance Pro Cycling rider Kristabel Doebel-Hickok as the biggest victim. She had to leave the race for a check-up in hospital.

Several riders tried to form a breakaway but couldn’t force a gap. The longest climb of the day came at around 30 kilometers and caused the peloton to break into two. The Murlo climb is 5.7 kilometers long with an average incline of 5 percent, and 35 riders were able to distance the rest of the peloton. With the second gravel section coming up just behind the climb, slightly going downhill throughout, riders outside that first peloton were no longer in for a chance of the win.

Riders continued to attack but the peloton kept everything together until Harris stepped up to her cyclocross reputation and put in a solo attack, building a lead up to 22 seconds when she reached the third gravel section of the day. Lucinda Brand (Rabo-Liv) decided to get in on the action and went on the counter-attack, reaching Harris by the time she was about to enter the fourth gravel section. Together, they built their lead to around a minute. Both among the best bike handlers in the peloton, the break looked promising.

The toughness of the race continued to split the chase group apart, but eight riders were able to get across to Harris and Brand.

Boels-Dolmans was there with a numerical advantage, having Armitstead, Harris and Guarnier in this group. The remainder of the lead group consisted of Brand and Van der Breggen (Rabo-Liv), Malgorzta Jasinska (Alé Cipollini), Gracie Elvin (Orica-AIS), Greta Richioud (Poitou-Charentes Futuroscope.86) and WiggleHigh5’s Emma Johansson and Elisa Longo Borghini.

It seemed likely that the winner would come from this lead group, but with 20 kilometers to go, all 35 riders at the front were back together, with some of the toughest parts of the race yet to come.

On a steep gravel section in the final 15 kilometers, Kasia Niewieadoma (Rabo-Liv) made a move for it and quickly got company of Armitstead and Johansson. The lead trio left the final gravel section with an advantage of 58 seconds to seven chasers and around 1’45” to the rest of the group.

With 10 kilometers to go, it was far from certain the podium places would go to these three women. The final part of the race is really tricky, with steep climbs and narrow passages, the climb into Siena in the final kilometer adding to the spectacular finish of this race. The chasers brought the gap back down to 30 seconds with 5 kilometers to go, but when the three reached the bottom of the climb well ahead of the first chase group, it was clear they were going to battle for victory among them. The breakaway three make their way back to Siena to contest the podium spots at the 2016 Strade Bianche.

At the steep 500 meter to go mark, Armitstead and Niewiadoma had distanced Johansson a couple of meters, so it was back to Boels-Dolmans versus Rabo-Liv.

Armitstead didn’t have any difficulty in beating Niewiadoma in the final hundred meters though and arrived at the finish line well ahead of the European U23 champion, proving the curse of the rainbow stripes wrong once again and continuing her dominant winning streak, having won both races she started in this year.

Just seconds after the finish, she told race organisers RCS: “It’s amazing to win the first UCI Women’s WorldTour event and this race is absolutely special. After winning in Belgium last week, thankfully I’m not affected by the curse of the rainbow jersey. I managed to honour it again today. We’ve shared the work in the last 10 kilometers with my two breakaway companions and I pulled away on the climb. It worked out really well.”

Armitstead told VoxWomen her legs were better today than she had expected: “Training has been going good, but not this good.” See highlights from the race and Armitstead putting on the stylish Women’s WorldTour leader’s jersey in the VoxWomen video.

While Armitstead put on a different white and striped jersey from the one she was already wearing, Niewiadoma swapped her bright blue European U23 champion jersey for the also blue Women’s WorldTour jersey of the young rider classification. With her second place, she provided her team Rabo-Liv with the first podium place of the season.

Johansson once again settled for an almost-win, having reached so many podiums over the last couple of years. An incredible performance by the Swedish Wiggle High5 rider, but she, like the rest of the peloton, once again had to bow her head to a Boels-Dolmans rider, after losing to Chantal Blaak in Le Samyn des Dames last Wednesday.

Johansson did enjoy the race, stating, “It’s such a nice race, a hard race. It’s a bit disappointing that there was no live coverage, but at least we were in it!”

“I think we did a good race,” Johansson continued. “Elisa was up there – she was fourth – and Dani [King] was also there. So the whole team has been racing strong today. It was a really good race from us, and I think we definitely did everything we could.”

As Johansson pointed out, there was no livestream of this race, which does need the images to show exactly how extraordinary it really is. Photographers Sean Robinson and Balint Hamvas provided us with these photo’s and be sure to come back tomorrow for an extensive photo gallery by the Vélofocus guys. Any highlight video’s we will come across we’ll share on our Ella Twitter and Facebook accounts.