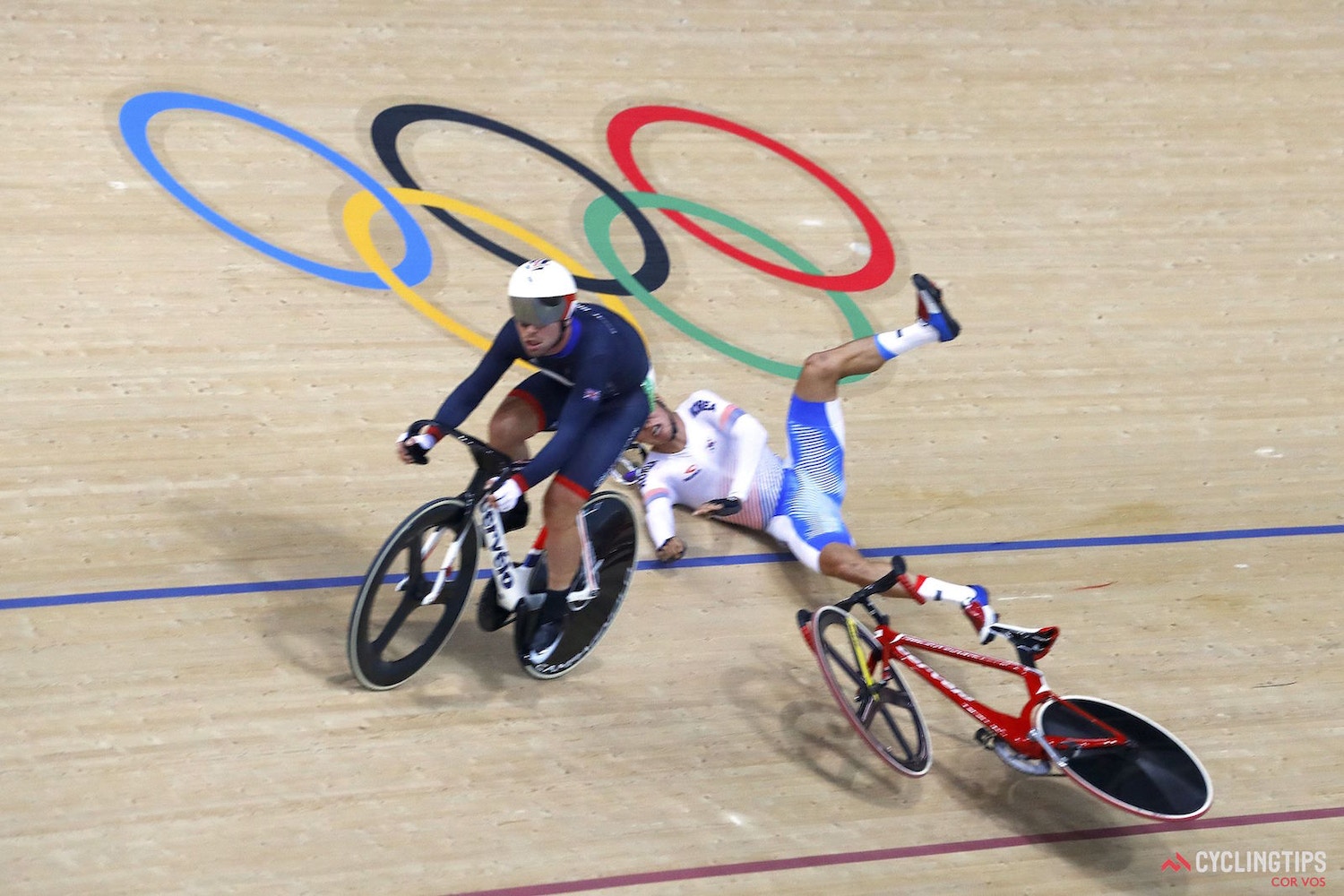 Mark Cavendish’s long quest for an Olympic medal was just 25 minutes away from a happy ending when, once again, the British rider was at the center of controversy regarding a high-speed crash that left several riders on the ground behind him.

This time, however, it wasn’t a field sprint at the end of a road race, but rather jockeying for position midway through the 40km points race, the final event of the two-day, six-event Olympic omnium in Rio de Janeiro.

Entering the points race, Cavendish sat second on the omnium standings, behind Italy’s Elia Viviani, with Lasse Norman Hansen of Denmark in third.

Halfway into the 160-lap race — and after looking back over his left shoulder twice — Cavendish swerved sharply down the banking, bringing his rear wheel into contact with the front wheel of South Korea’s Sanghoon Park.

The crash also brought Viviani and Australia’s Glenn O’Shea tumbling to the boards. The race was neutralized for 10 laps as Park, who lost consciousness, was carried off the track on a stretcher.

After the crash, Twitter lit up with those who felt Cavendish should have been immediately disqualified.

Some said that Cavendish intentionally caused Park to crash; other said it didn’t matter whether it was intentional or accidental, his dangerous riding merited a disqualification.

And while there’s no question that Cavendish had deviated from his line, it was not as clear a violation as in a field sprint; using the banking is part of track racing, just as using a draft is part of road racing.

After reviewing footage of the crash during the neutralization, race officials ultimately did not penalize the Manxman.

Former road pro Michael Rasmussen, who has admitted to having doped during his career, wrote that Cavendish’s dangerous riding was worse than doping. “What Cavendish just did is worse than what any Russian lab could possible come up with!” Rasmussen tweeted. “Absolute BS. Should be DQ.”

And while some felt Cavendish should have been given the benefit of the doubt — that the crash was his fault, if not intentional — others pointed to a history of crashes the Dimension Data rider has caused during his career, such as the massive pileup at the 2010 Tour de Suisse that caused both Heinrich Haussler and Tom Boonen to miss the Tour de France.

More recently, Cavendish caused a crash at the end of Stage 1 of the 2014 Tour de France that also took Australian Simon Gerrans. Cavendish later apologized for that incident.

After the points race in Rio de Janeiro, Cavendish owned his mistake.

“It was my fault,” He said. “I should’ve looked where I was going a bit more. I hope [Park] is all right. I apologized to Elia, who went down.”

Yet the Manxman wasn’t interested in having a conversation about what had happened. British Broadcasting Corporation (BBC) did not ask Cavendish about his dangerous move.

Dutch journalist Thijs Zonneveld, a former professional racer who writes for Algemeen Dagblad, posted on Twitter that Cavendish should have been disqualified. After the race, he showed Cavendish a replay of the incident on his laptop, and asked Cavendish if he cared to comment.

Cavendish’s reply, according to Zonneveld, was to first suggest that it must have been a Dutch rider who crashed, and then to say, “I could sue you for [asking] that, do you know that?”

It wasn’t the first time Cavendish went after a reporter who questioned whether he was to blame for causing a crash. Rather, Cavendish’s response was reminiscent of his reaction during the 2013 Tour, to being asked if he was to blame for a crash involving Tom Veelers — prompting Cavendish to snatch the reporter’s recorder.

However Viviani — who also went down in the crash — didn’t lay all the blame on Cavendish.

“It’s not his fault,” Viviani said. “The Korean guy was halfway on his wheel to the right, normally you stay on the wheel. Cav was in the front and changed direction, so it’s all normal. It’s a normal crash on the track. For sure it was a bad moment in the race.”

Likewise, O’Shea, another victim of the crash, chalked it up to “a bit of bad luck.”

In the end, Cavendish — who bitterly missed out on Olympic medals in 2008, in the Madison, and in 2012, in the road race — would get his Olympic medal. But after three attempts, it was from a joyous affair.