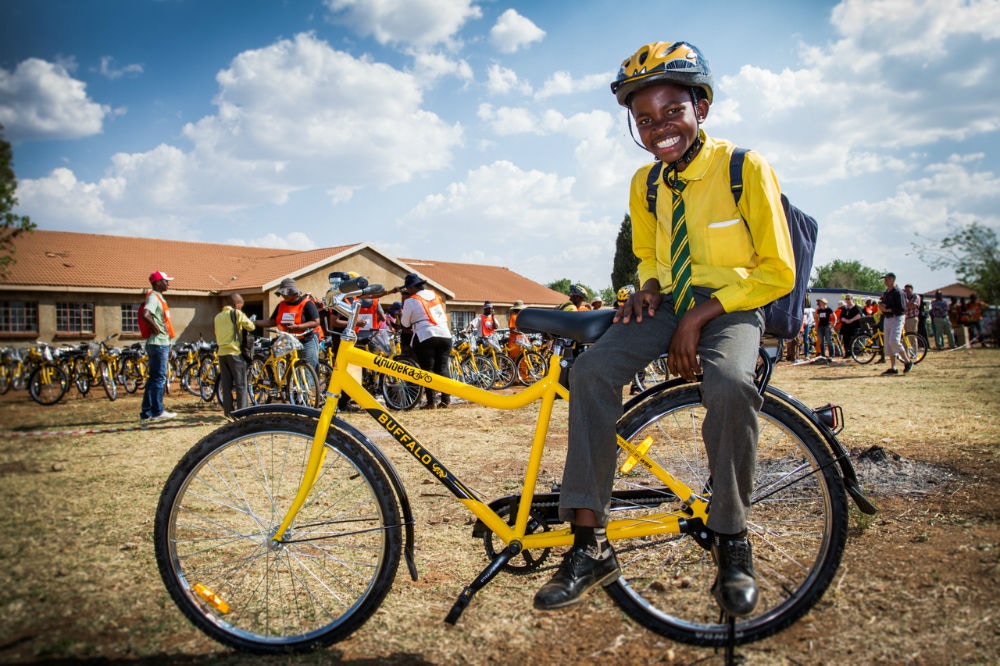 When they line up in Utrecht on July 4th they will create history as the first African registered team to compete at the event.

But making history will no doubt follow this team for some time to come – rider Daniel Teklehaimanot collected the team’s first ever World Tour jersey at last month’s Critérium du Dauphiné with the KOM title on the eighth and final stage of the event. What already sets them team apart from the pack is their unique relationship with one particular sponsor. Whereas for other pro teams, naming rights titles are coveted and costly, Qhubeka has not paid a rand towards sponsorship of the team. In fact, MTN-Qhubeka p/b Samsung not only doesn’t charge Qhubeka for naming rights, but helps Qhubeka raise funds for bicycles that go to school children through campaigns like bicycleschangelives.com.

Why? Because Qhubeka is a nonprofit South African programme that needs the team’s support to help raise its profile and global awareness of its cause. We caught up with Qhubeka’s Wendy van Eyck to find out more.

It all came about when Anthony Fitzhenry set out to help South African students advance themselves and their communities through education. A tremendously successful IT entrepreneur himself, Mr. Fitzhenry was somewhat disillusioned by the high numbers of children either regularly missing school, or avoiding it entirely. He thought improving internet connection and quality to schools might help retain some students. He soon discovered how wrong that was.

It wasn’t a case of improving conditions for students in school, but moreso a case of getting them there in the first place. For many, the distances and dangers made commuting to school unsavory at best, potentially fatal at worse. Research indicates half a million South African children who walk to school do so for up to an hour each way. So Mr. Fitzhenry began to meet students and their families, visit them in their homes and learn first-hand the grievances and challenges that faced them and their path to a better education.

One simple, humble item presented as a possible solution. A bike. If these kids had a bike they could circumvent potential threats on their journey and just get from A to B so much faster. A one-hour walk might well be a 15-minute ride.

And so the idea of Qhubeka (meaning ‘to carry on’, ‘to progress’ or ‘to move forward’ in Zulu, Xhosa) was formed, and children were given bikes not only to commute to school, but also in return for work done to improve their local community or environment. A win-win for all. Since then, 57,000 bikes have been distributed and commute times to school have been reduced by 75%. In 2013 Qhubeka became World Bicycle Relief’s program in South Africa. The program provides support by way of logistics, program development, fundraising and more.

World Bicycle Relief for instance designed the ‘Qhubeka Buffalo’ bike, a machine developed specifically for African conditions and rider load requirements. It’s made to haul heavy loads across long distances. It’s a sensational cause and we are particularly keen to see how this team fares on Tour.

Some of the Riders with MTN-Qhubeka p/b Samsung You haven't even scratched the surface! Jump to our blog for everything bike