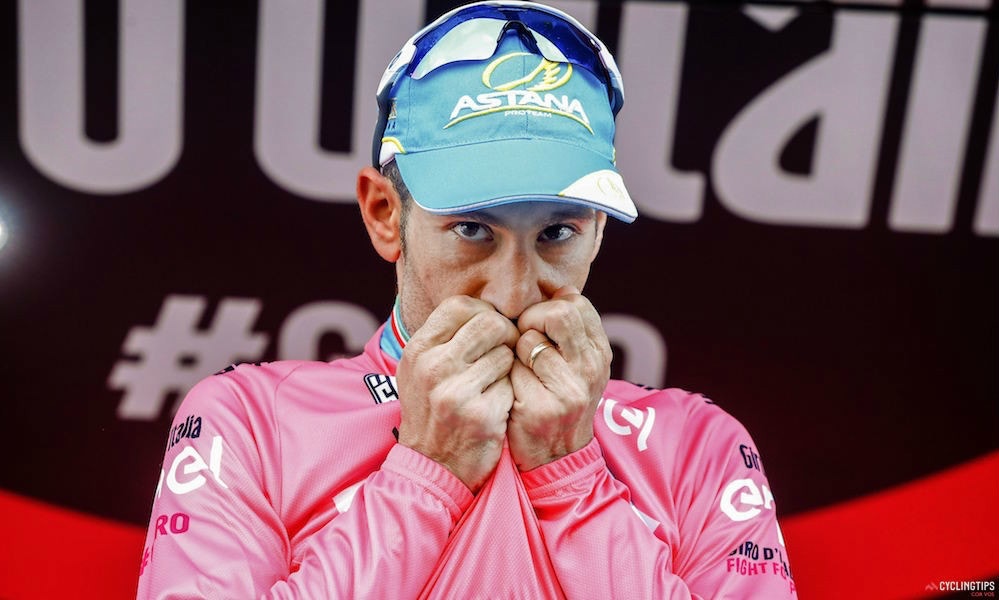 The 2016 Giro d’Italia was one summit finish too many for Colombian Esteban Chaves — and ended in the best possible scenario for Italian Vincenzo Nibali.

The Orica-GreenEdge rider, who had taken the maglia rosa on Friday for the first time in his career, ceded the race lead on the final climb of the race, La Lombarda, on Stage 20, unable to follow Nibali (Astana), who attacked his way to a second career Giro title.

Nibali became the third race leader in three days at the Giro, after former maglia rosa Steven Kruijswijk (LottoNL-Jumbo) lost time due to a high-speed crash into a snow bank on the Colle dell’Agnello Friday.

“It’s amazing,” Nibali said. “I didn’t believe I could win the Giro. It’s been a spectacular day really. I’ve benefited from an enormous amount of work by my team. I rode without the fear of losing anything, but after yesterday, I understood that I was able to win the Giro. I attacked when I saw the others suffering. It’s wonderful.”

Nibali holds a 52-second advantage over Chaves, with Alejandro Valverde (Movistar) riding into third overall, at 1:17, bumping Kruijswijk off the podium. Barring injury or accident, this be the podium on Sunday in Torino, as the final stage of the Giro is often a procession, ending in a sprint finish.

“I’m extremely happy about today’s result,” Valverde said. “I think everyone could see it when I punched the air so hard after the finish, standing there, waiting for the overall podium to be confirmed. It seemed as if I had won the race myself. It wasn’t easy at all, but we got that third place and we came so close to the second spot. And at the end, after struggling so much in altitude, it seemed like I got used to it, because my legs during the final climbs were fantastic.”

Overshadowed by the drama of the GC battle was the stage win for Estonia’s Rein Taaramae (Katusha), who rode away from breakaway companions Darwin Atapuma (BMC Racing) and Joe Dombrowski (Cannondale) on La Lombarda.

Crossing the finish line, Taaramae drew the figure of the letter Z, dedicating the win to Katusha teammate Ilnur Zakarin, who crashed out of the race Friday on the Colle dell’Agnello.

“Ilnur Zakarin’s crash yesterday scared me a lot,” Taaramae said. “I was close to him. I saw everything. The thought crossed my mind that something very serious could have occurred, but when I saw him sitting up, I was relieved. It was hard to go and race again today after that but I also wanted to win this stage for Zakarin. I didn’t feel good at the beginning of the stage. I was the last rider to catch the breakaway. On La Bonette, above 2000 meters, I started feeling good, so I rode away on La Lombarda at the highest possible altitude. I had six weeks of altitude training, and it paid off.” The penultimate stage of the 99th Giro d’Italia had the profile of a shark’s tooth, with three Category 1 climbs coming before a final Category 3 ramp to the finish, all packed into 134 kilometers.

With the top four on the general classification only separated by 1:48, the stage was destined to be aggressive.

The fight up the first climb, the 18 kilometer Col de Vars, was immense, with some teams trying salvage their Giro performances with a stage win, and the GC teams trying to send riders up the road to assist when their leaders attack later in the day.

Denifl crested the Col de Vars first, followed by Nieve, who was within striking distance of the lead in the King of the Mountains competition, held by Damiano Cunego (Nippo-Vini Fantini).

Onto the next climb, Col de la Bonette, Nieve attacked his breakaway companions on the lower slopes. In the peloton Orica-GreenEdge continued to set the pace for the maglia rosa.

Nieve built an advantage of one minute over his former breakaway partners, while Atapuma continued to accelerate and attack the chase, with Dombrowski and Visconti quick to react every time. These accelerations dropped Brambill and Rybalkin from the group

With 70 kilometers to go Nieve rode over the top of the Col de Bonette alone and gained maximum points, taking the lead of the King of the Mountains competition.

Rafal Majka (Tinkoff), fifth on the general classification, put in a dig as the peloton neared the top of the Bonette, but he gained little advantage and put none of the other GC contenders into difficulty. Most of the contenders were now down to only one or two teammates.

The average speed of the leaders over the Bonette was under 30kph.

The 40-kilometer descent off the Col du Bonette to Isola at the base of the Col du Lombarda was fast and twisting. Nieve opted to sit up and wait, having gained maximum KOM points.

Brambilla put in a brilliant descent to rejoin the leaders with 37 kilometers to the finish. But the former maglia rosa would pay for the effort and was soon dropped as the 20km, 7.5% climb of the Lombarda began.

Dombrowski, who trains frequently on the climb due to his European base in Nice, attacked on the lower slopes, drawing out Atapuma and Visconti.

Taaramae, Nieve, and Kangert chased to reach the leaders, but Nieve was unable to hold the pace and dropped off as the other two made the junction.

As the peloton hit the climb more than 10 minutes behind the leaders, Tinkoff moved to the front with Manuele Boaro doing a big turn for his leader Majka. Boaro’s turn thinned the group to the contenders, as Astana took over the pace making with Jakob Fuglsang. Nibali was at an advantage, the only rider with teammates alongside him.

Michele Scarponi (Astana) soon took over, but shortly thereafter accelerated off the front of the group. Nibali, who had been sitting a few wheels behind, bridged up to his teammate and the race was on. Only Chaves, Valverde, and Kruijswijk were able to latch on.

Meanwhile the breakaway was at 15km to go, and about 5km from the summit of the Lombarda when Dombrowski put in a big attack. Unable to follow, Kangert was instructed by his team car to wait for his attacking leader, who was still over eight minutes behind.

Taaramae was slow to bridge to Dombrowki, Atapuma, and Visconti, but once he made the junction he counter-attacked and set about chasing the stage win alone.

Just as the GC favourites came through the 15km to go marker, Nibali put in a vicious attack, ridding himself of Chaves and Valverde. Kruijswijk had been dropped earlier, suffering from a broken rib in Friday’s dramatic crash into a snowbank.

Nibali soon teamed up with Kangert, as his advantage over Chaves crept toward 30 seconds. He needed only 45 seconds to take the maglia rosa.

Valverde shared the chasing effort with Chaves, with the Spaniard hoping to move ahead Kruijswijk for the final podium spot. Unable to follow Vincenzo Nibali’s attack, Esteban Chaves was flanked by Michele Scarponi and Steven Kruijswijk as he struggled to defend his race lead on Stage 20 of the 2016 Giro d’Italia. Photo DB/RB/Cor Vos.

Chaves’ shoulders rocked back and forth as the Colombian suffered up the climb. Rigoberto Uran (Cannondale), who has had a solid final week of racing at the Giro, suddenly latched on to Valverde and Chaves. The Colombian had openly said he would help his friend and compatriot defend the maglia rosa, if the situation arose.

Taaramae led over the Lombarda with Atapuma and Dombrowski chasing behind. All that was left for the Estonian was a short technical descent before a final 2km ramp to the finish.

Nibali was alone over the top, as Valverde and Uran had ridden away from a fading Chaves. Chaves crested the climb 55 seconds behind Nibali, but he was still in with a chance of saving his race as a chase group consisting of Bob Jungels (Ettixx-QuickStep) and Kruijswijk had picked him up.

Taaramae powered across the line and pumped his fist in the air in victory. Atapuma managed to drop Dombrowski on the final climb to finish second, with the American finishing his Giro off with a podium finish on the final mountain stage.

“It was not easy at all to go in the break,” Taaramae said. “Honestly, I suffered a lot in the beginning. I even dropped a few times from the break, but everytime I was able to come back. I did everything to go on on a regular pace and that worked. I know these climbs very well since I did a lot altitude training camps here. From those camps I also learned that I become better the higher we go in the mountains.

“I found my moment to attack and I went away. I took my rhythm and was able to create a gap. The last two kilometers were really hard, I had strong cramps, but I went until the finish and won. This victory is very important for me but also for the team. I am super happy and I still can’t believe it.” The 2016 Giro d’Italia ended in heartbreak for Steven Kruijswijk (LottoNL-Jumbo), who began Stage 19 with a three-minute lead on the general classification, but ended Stage 20 off the podium, in fourth overall. Photo Miwa IIjima/Cor Vos.

Nibali finished the stage 6:44 behind the winner, waiting for the time gaps that mattered most. Valverde came across the line with Uran; the Spaniard had opened up a big enough gap on Kruijswijk and would be moving up to third overall in his first Giro appearance.

“I did the best I could,” Kruijswijk said. “I barely slept last night after my crash and I felt a lot of pain. I tried to ignore that pain. I wanted to forget everything and go to the finish line. I did. This was it.”

Chaves crossed the line and hung his head; he’d lost the maglia rosa. Opposite him, Scarponi pumped the air as he crossed the line. His Astana teammate would be the Giro champion for a second time in his career.

“Today was really hard,” said Chaves. “I don’t want to make any excuses because we gave it everything today. I didn’t have the legs and that’s how it happened when I got dropped. I am very proud of my teammates and how they were fighting, it has been an incredible Giro d’Italia and tomorrow we will have the last stage. After that we can celebrate everything we have achieved.”

Nibali will ride into Torino on Sunday for the final stage of this year’s Giro d’Italia with a 52-second advantage over Chaves. Valverde will complete the podium at 1:17 behind the Italian.

Jungels, a sensation at this year’s Giro, sits seventh, but will also bring home the white jersey of Best Young Rider.

Sunday’s final stage is 163 kilometres and will finish with circuits around the city of Torino. The few sprinters that have made it over the tough climbs should have one last chance at a stage victory.