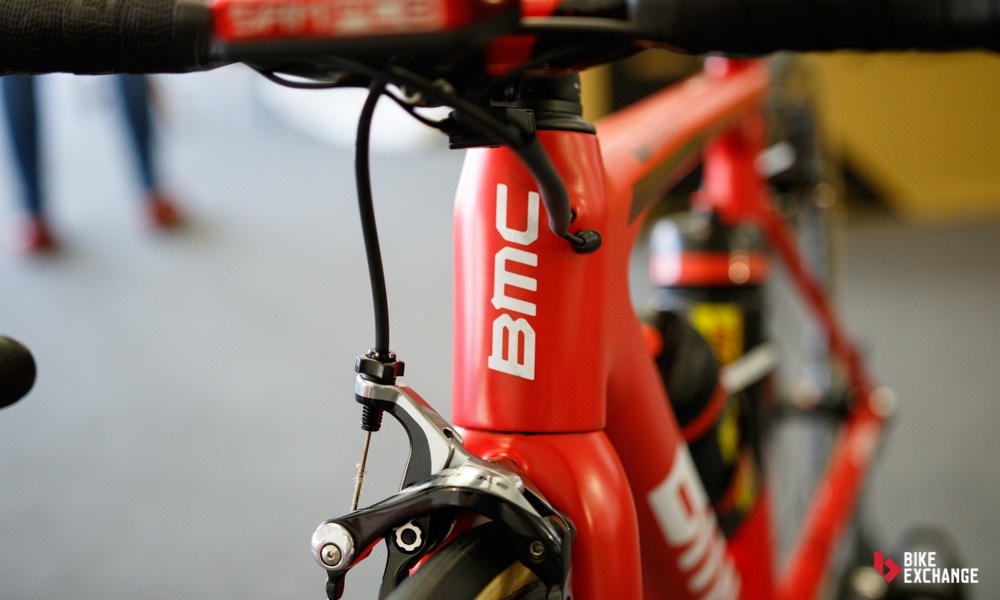 Richie Porte is Australia's latest GC hope looking to follow in Cadel Evans' footsteps, not only because he too is riding for BMC, but with a bit of luck, the Tasmanian holds the form to win Tour de France. He certainly fits the mold of a general classification rider: small in stature, without any unnecessary weight to drag up the high mountains. He can climb and he's also won the Australian Individual Time Trial title, so he has all the tools to be successful in a grand tour.

Richie kicks off his 2017 campaign at the Tour Down Under with an eye to France in July. Carrying him all the way will be his versatile BMC Teammachine SLR 01. We were at the TDU Village and able to get a hold of Richie's bike to get a closer look and take you through all the important facts. As it was in 2016, the BMC team will be riding the Teammachine SLR01 in 2017 with the same basic set-up and a new lick of paint. The bike is a versatile all-rounder from the Swiss brand that riders will use in all races except for the roughest of Classics. Richie rides a diminutive 48cm frame, which is considered small even for his 1.72m and 62kg frame, and has him right down on the UCI's 6.8kg weight limit. The groupset is 'old' Shimano Dura-Ace Di2, which will be replaced with the new Dura-Ace R9150 when the team heads over to Europe. Richie runs a typical 53/39 chainring ratio (with 170mm cranks), paired with an 11-28 cassette at the rear that provides plenty of range for flat roads and mountains alike. Power data is collected by an SRM power meter and displayed via the PC8 head unit. Shimano also provides the wheels for the team, Richie opting for Shimano C35 Tubulars at the Village, but he may well switch to the shallower C24 wheelset for the hilly stages given the reduction in rotating weight. A change for the team in 2017 is the switch from Continental to Vittoria tyres. In this case, the 25c Graphene Corsa tubular tyre gets the nod. Like Shimano, 3T are back for 2017 and providing the cockpit components. As you would expect with such a small frame and rider, the handlebars are a narrow 40cm in width, while the stem is a pretty normal 110mm in length with a 6-degree angle. Certainly nothing like the negative drop and extended stem length that we are conditioned to seeing on other pro bikes. A subtle change for Richie in 2017 is the saddle choice. The Fizik K1 triathlon saddle used in 2016 has been replaced with the Fizik Arione, which is a little longer with less padding at the nose than the K1. Richie's bike is finished off with Elite bottle cages, custom number holder, and interestingly, because of the UCI's 6.8kg minimum for bikes, weights are added to the SRM crank’s spindle to get the bike to make weight.