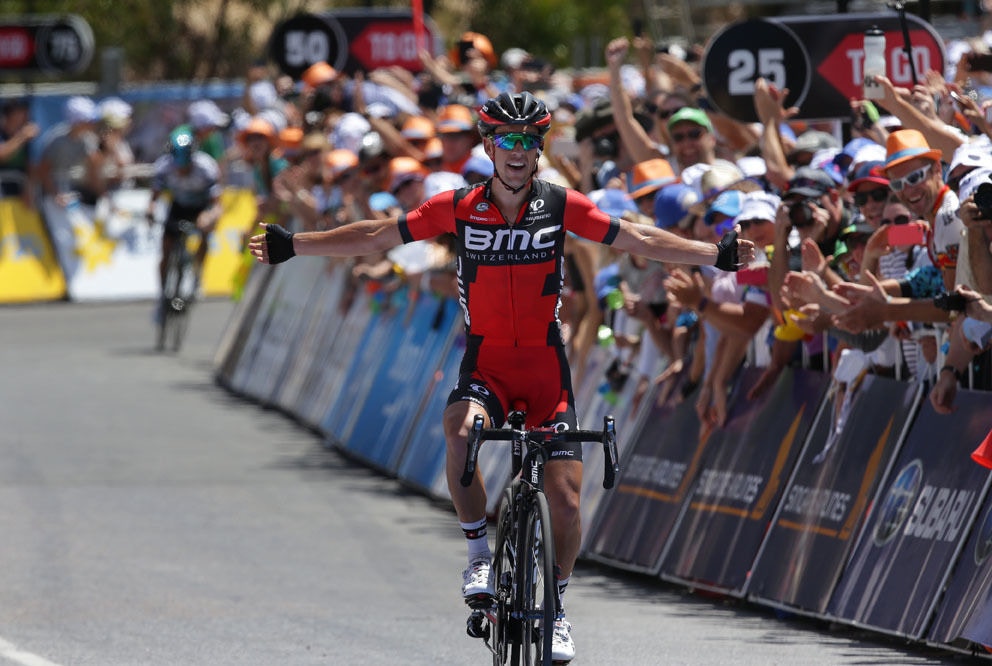 WILLUNGA, Australia (CT) – Richie Porte (BMC) has won stage 5 of the 2016 Santos Tour Down Under, dashing to a third victory on Willunga Hill in as many editions of the race.

Porte made his move with a little more than 3/4 mile to go on the stage-ending 1.8 mile climb, shredding an elite lead group and prompting Michael Woods (Cannondale) and former teammate Sergio Henao (Sky) to chase after him.

Henao managed to bridge the gap to Porte while Woods dangled off the back. Porte soon rode his former teammate off his wheel before bolting away to victory in front of a vocal Willunga Hill crowd. Henao finished second, six seconds behind, while Woods completed the podium, a further three seconds behind Henao.

Porte came into this year’s Tour Down Under with claims that his form wasn’t what it had been in previous editions of the race. As a result, he said, today’s win came as something as a surprise.

“To be honest I never expected that one,” Porte said after the stage. “I definitely came in here underdone. I stayed in Europe until Christmas Eve so I’m really happy with how it’s gone — I’m not in fantastic shape just yet.”

Porte spent the early part of this year’s Tour Down Under riding for his teammate and defending champion Rohan Dennis (BMC). That plan changed overnight.

“Full credit to Rohan. He said yesterday that he didn’t have great legs and he was willing to sacrifice [his own chances],” Porte said. “Him being a South Australian, it’s his home race… He’s been a brilliant teammate this week.”

Race leader Simon Gerrans (Orica-GreenEdge) crossed the line 17 seconds behind Porte as part of an eight-rider chase group. Unable to match the pace of Porte, Gerrans focused on riding his own climb.

“I knew if I blew there on that last climb I was going to put my jersey in jeopardy,” Gerrans said after the stage. “I thought if I just kept my cool and rode my own pace even when they attacked me in the final, it should be enough to hold on, and I was just right.”

With Porte having started the day 36 seconds behind Gerrans on GC, Gerrans maintains his overall lead and now leads Porte on GC by nine seconds. Sergio Henao moves up into third overall with one stage remaining in the race. Stage 5 of the 2016 Tour Down Under began in the town of McLaren Vale in the heart of the famous wine region of the same name. At 94 mile, stage 5 would be the longest of the race, incorporating three laps of a 25 mile coastal circuit before two laps of Willunga Hill to conclude the stage.

The opening miles were fast and aggressive as many riders vied for a chance of getting in the day’s breakaway. It took more than 6.2 miles of failed attempts until a group of four was allowed to sneak away: Pim Ligthart (Lotto Soudal), Lars Boom (Astana), Nelson Oliveira (Movistar) and Reinardt Janse van Rensburg (Dimension Data).

A crash in the peloton saw LottoNL-Jumbo’s former ski-jumper Primoz Roglic abandon the race as Orica-GreenEdge allowed the break to build its lead. The gap was 2:00 after 14.7 miles, 4:00 after 28 miles and out beyond five minutes when the four leaders hit the first intermediate sprint at 38 miles. Ligthart took the maximum points there in Snapper Point ahead of Janse van Rensburg and Boom. Little changed over the next 37 miles as Michael Hepburn (Orica-GreenEdge) did the majority of the pacemaking with some assistance from teammate Caleb Ewan and cameo appearances from Drapac, Lampre-Merida and Ag2r La Mondiale.

By the time 63 miles had been completed and 31 miles remained, the four leaders’ advantage was beyond six minutes, prompting an increased sense of urgency in the bunch. Ligthart again took the maximum prize at the second intermediate sprint with 29 miles to go, with Janse van Rensburg second and Oliveira third.

Back in the peloton, Orica-GreenEdge was getting some assistance from Tinkoff in chasing down the leaders, the pace well and truly on. With 21.75 miles remaining the gap had dropped inside five minutes but the four leaders were continuing to work well together.

When the peloton started the first of two ascents of Willunga Hill, 16 miles from the finish, the leaders were 3:20 up the road. But that advantage would soon be slashed.

Peter Kennaugh (Sky) drove the pace on the climb while up ahead, Reinardt Janse van Rensburg was attacking his breakaway companions and going solo. He would go over the top of Willunga Hill with just a few seconds between him and the rest of the break. The peloton reached the summit 2:25 later with BMC having done much of the pacemaking up the hill.

On the short loop back to the base of Willunga Hill, Janse van Rensburg would be caught by his former breakaway companions, BMC and Sky would set a blistering tempo on the front of the peloton, and the lead group’s advantage would steadily be eroded.

With 8.5 miles to go the gap was inside a minute as the breakaway riders traded blows in an attempt to steal a march on the swiftly approaching peloton. Ultimately the breakaway would be caught just as the peloton reached the bottom of the final Willunga Hill ascent with 2.2 miles to go.

Simon Clarke (Cannondale) launched an attack with 1.4 miles to go and was followed by defending champion Rohan Dennis (BMC). They would soon be caught as the youngest rider in the race, Lucas Hamilton (UniSA-Australia) burst off the front, Dennis being dropped from the lead group.

Hamilton was soon joined by George Bennett (LottoNL-Jumbo) but 2/3rd miles from the summit it was Richie Porte that tore the race apart. He dashed past the two leaders with only Michael Woods and Sergio Henao about to follow.

Henao got on to Porte’s wheel while Woods struggle to get on terms. It wasn’t long until Henao wasn’t able to handle to pace of his former teammate and with a quick look-back, Porte realized he was on his own.

The Tasmanian bolted away to a thrilling solo victory, just as he’s done the past two years on the same climb. Behind him Henao and Woods crossed the line in that order, followed by an eight-rider group containing Gerrans, Domenico Pozzovivo (Ag2r La Mondiale) and Patrick Bevin (Cannondale).

THE RACE FROM HERE

The 2016 Tour Down Under concludes tomorrow with a 56 miles circuit race around the streets of Adelaide. Barring any major mishap, Simon Gerrans will wear the leader’s jersey through tomorrow’s stage to take out his fourth Tour Down Under title.

Gerrans also leads the points classification but the red jersey will be worn by Rohan Dennis as both Gerrans and second-placed Jay McCarthy (Tinkoff – best young rider) will be in different jerseys. Sergio Henao retains his lead in the KOM classification.