Six Breakthrough Riders to Watch at the Giro 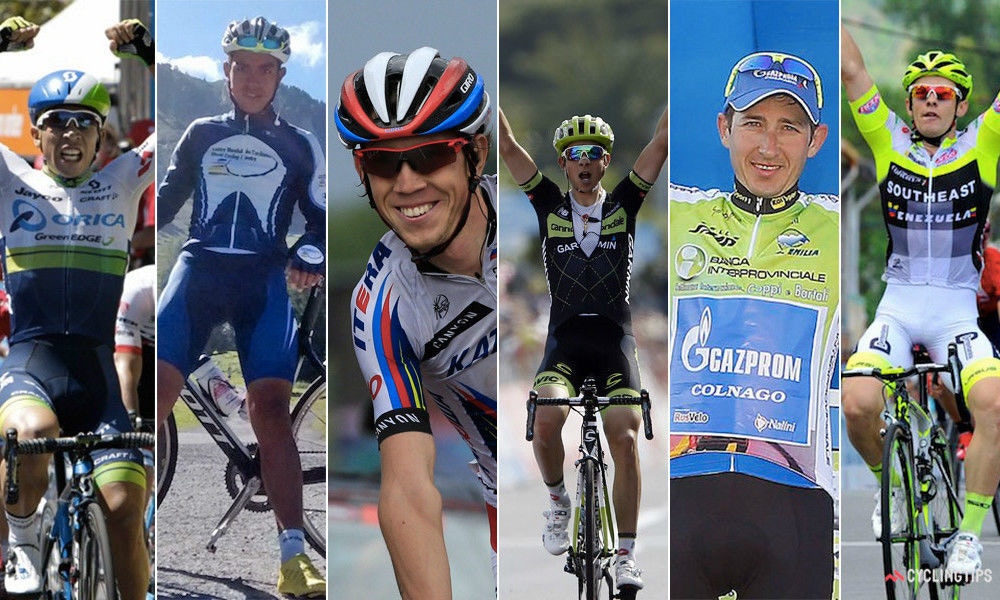 The 2016 Giro d’Italia begins on Friday, and as expected the main focus is on the big names. Whether it’s Vincenzo Nibali, Alejandro Valverde or Mikel Landa, debates are raging about who will hold the Trofeo Senza Fine aloft in Turin in three weeks time.

It’s unsurprising then, that with 198 riders doing battle over 21 stages there is a lot more to talk about than the main GC favourites. Aside from the daily battles for stage wins, there will be the three-week long contests to be crowned best climber, fastest sprinter, best young rider, and more.

Here, we look at six riders who may be poised for breakthrough rides at this year’s Giro.

These riders are something of a mixture of the different jersey competitions, but there is one thing they have in common — each will be looking to announce themselves on the big stage of the Corsa Rosa.

The battle for sprint supremacy will be a fierce one at this year’s Giro, with Marcel Kittel, Arnaud Démare, André Greipel and Elia Viviani among the big names that will be fighting it out at the sharp end of up to eight stages that could come down to a sprint finish.

Destined to be among them is a newer name — Orica-GreenEdge’s Caleb Ewan. Just 21, the Australian will be racing the Giro for the first time, having turned pro just last season.

Ewan is already a grand tour stage winner, having won stage 5 of last year’s Vuelta a España after racking up a series of impressive victories earlier in the season, including multiple stage wins at the Herald Sun Tour, Tour de Langkawi and Tour de Korea.

With a stocky build, below-average height (he’s 5-foot-4) and a highly aerodynamic sprint style, Ewan has drawn comparisons to Mark Cavendish, and it seems as though it won’t be long before he is racking up wins in the big races. He comes to the Giro off the back of a challenging Tour de Yorkshire, where he narrowly missed out on a stage win to LottoNL-Jumbo’s Dylan Groenewegen, but sounded confident about his chances in Italy.

“It would be nice to get a stage win, and that’s the goal, so hopefully everything goes to plan,” he said this week. “It’s obviously going to be hard to challenge [the likes of Kittel and Greipel] but I think if I feel good, my form is good, and everything goes right, I can challenge them.” Another young sprinter looking to make an impact at the Giro is Jakub Mareczko of the newly rebranded Wilier-Southeast.

The Polish-born Italian, who celebrated his 22nd birthday on Saturday, is another second-year professional who comes with a fair amount of hype.

Last season saw him win numerous stages at lower-level races — the Vuelta al Tachira, Vuelta a Venezuela, and the Tour du Hainan, capping his first year in the peloton with a shocking seven victories at the nine-stage Tour of Taihu Lake.

The races have been bigger in 2016, but the wins are still coming. He’s crossed the finish line first at San Luis, Langkawi, Coppi e Bartal, and most recently, on two stages of the Tour of Turkey. There, he beat two of the men he’ll be up against at the Giro — André Greipel and Sacha Modolo.

“Turkey gave me something that I was missing in order to be in top condition,” he said. “I’m very excited and proud to race the Giro, and my goal is to try and win a stage. Success there would be the icing on the cake of this first year and a half of professionalism. I’m not there just to learn. We’re a very young team and we want to try and surprise everyone.” Part of the young Wilier-Southeast team lining up at the Grande Partenza in Apeldoorn will be Daniel Martinez, a climber from Colombia who is just out of his teens. having turned 20 on April 25th.

Like his fellow Colombian in Italy, Egan Bernal, Martinez skipped the U23 ranks entirely to turn pro with Colombia-Coldeportes last season. He admits the year was a learning experience for him, but he picked up some impressive results along the way, including the mountains jersey at the Route du Sud and the best young rider’s jersey at the Larry H. Miller Tour of Utah.

In 2016 Martinez has perhaps been outshone by Bernal, finishing behind his countryman at the Settimana Coppi e Bartali and Giro del Trentino, but finishing around the top 20 of these races as a teenager is some feat in itself.

The three weeks of the Giro d’Italia is another big step up for Martinez, and he freely admits that it’s more about learning than anything else.

“It will be a learning experience, but also part of my dream,” he says. “It will be a challenge for me to deal with the three weeks since I’ve never been in a race that lasted longer than nine days. Racing the Giro is something new for me, but I hope to try my best and show myself in some of the stages, if I can.” While Martinez may have impressed at Coppi e Bartali and Trentino, Firsanov was on another level entirely. The 33-year-old Russian from Velikiye Luki near the Latvian border has had a long wait to reach the top level of the sport but now that he’s here, he’s grabbing it with both hands.

Firsanov, who moved to Rusvelo in 2012, has spent the bulk of his career racing in events that aren’t exactly familiar to many cycling fans, taking wins in the Norwegian Ringerike GP and the Five Rings of Moscow. His first year with the squad saw his biggest victory until this season, beating Nairo Quintana at the Vuelta a Madrid.

For Firsanov, 2016 has been something else, with big wins at the Settimana Coppi e Bartali and the Giro dell’Appennino, followed up by fourth overall at the Giro del Trentino. He has proven that he can mix it up with marquee riders like Mikel Landa, Jakob Fuglsang, and Romain Bardet.

And now Firsanov will get a chance to show what he can do at a grand tour, in no small part thanks to the rebranding of his team. The big-name gas giant sponsor Gazprom came on board this year, while the team’s ties to Italy — they are based in the country and ride Colnagos equipped with Campagnolo gear — have also helped secure a surprise wildcard invitation.

Firsanov is something of a wildcard himself. Going by his spring results he certainly looks capable of stage wins, but a GC performance over three weeks is something else. So what does he expect?

“It’s a big challenge, but I try not to think about it,” he said. “My team and I want to make a good account of ourselves. If we manage to win a stage then that will be a great achivement for us.” Firsanov isn’t the only Russian looking to show himself at the Giro, as Katusha’s gangly climber Ilnur Zakarin will be testing himself as a GC contender at a grand tour for the first time in his career.

A stage winner in Imola last May, many have tipped the 26-year-old as a possible podium challenger, but Zakarin is guarded about his goals.

“I want to fight for a high place in the general classification — that is my Plan A,” he said. “I can’t tell you which exact place I want to reach, but I’ll do my best and see where I can go. We’ll see.”

For many, the first time they’d heard of Zakarin was last spring, as he rode to top 10 at the Vuelta al Pais Vasco before winning the Tour de Romandie on his way to the Giro. They were surprise results, not just for cycling fans but for Zakarin himself.

“When I first came to the WorldTour with Katusha I saw immediately that the level was higher and it took some time to adapt,” he says. “I did not expect those big results. That was a big surprise for me.”

For some his rise has been tainted by a positive test for methandienone at age 19. After his two-year ban, Zakarin showed glimpses of talent as he rose through the ranks at Rusvelo. In 2012 he was ninth at the now-defunct Girobio, taking a stage win along the way, while he won the 2014 Tour d’Azerbaïdjan and was Russian time trial champion in 2013.

Zakarin is a strong climber — this season has seen him win a summit finish at Paris-Nice, finish fifth at Liège-Bastogne-Liège, and match Nairo Quintana at the Tour de Romandie — but it’s his time-trial ability that sees him viewed as one of the favourites on this time trial-heavy parcours, even if riding for GC over three weeks is an entirely new challenge for him. Joining Zakarin on the list of stage winners last year was young Italian Davide Formolo. The 23-year-old Veronesi has impressed ever since turning pro with the team in 2014. Formolo finished seventh at his first ever WorldTour race, the Tour de Suisse, and almost became national champion as a neo-pro a few weeks later, beaten only by Vincenzo Nibali.

Last year’s Giro stage win was equally as impressive, attacking the breakaway on the final climb of the day and riding solo for 15 kilometres to the finish in La Spezia. It will be harder to replicate this time around though, as now everybody knows what Formolo is capable of.

The 2016 season hasn’t gone quite as smoothly, with Formolo crashing out of the Tour de Romandie. Otherwise, 15th at the Volta a Catalunya is his best result, though with three weeks of racing up ahead, there’s still time for Formolo to find his form.

At the Giro, he’ll be riding in support of team leader Rigoberto Urán, but will also be allowed to take his own chances, said team boss Jonathan Vaughters, who has tipped Formolo as a future Giro winner.

“He’s got a shot at the young rider jersey, sure, but that’s a byproduct of riding well,” Vaughters said. “He’ll be a superdomestique for Rigoberto Urán, but I’d look for him to take some chances, too.”

As for Formolo, he’s gunning to go.

“It’s Giro time, I’m good,” he said. “It’s unlucky that I crashed in Romandie, but everything will be fixed before the Giro. I’m ready to fight.”