Find a store Blog
‹ back
Home
Blog
News
We Didn't See That Coming!

We Didn't See That Coming! 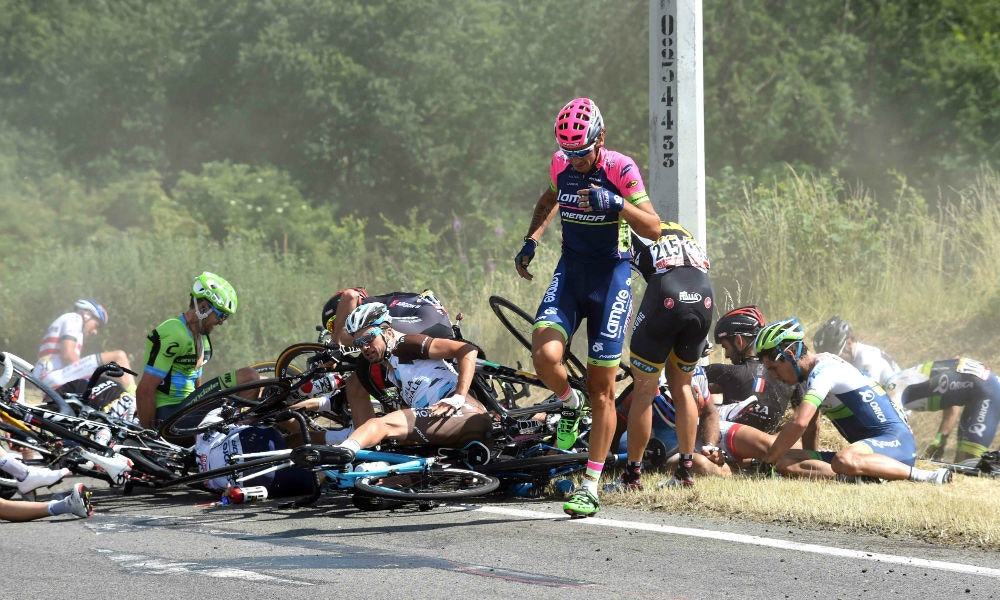 Halfway through the 2015 Tour de France and there has been a seemingly endless stream of drama. Crashes, abandonment's, miracle stage wins, and lots of great racing.

We take a look back at the first 12 stages, and give you the top 5 surprises of the Tour.

1. Froome hasn't been the best performer for Team Sky

The form of Geraint Thomas in the 2015 Tour has been literally unbelievable.

His ascent of Plateau de Beille had to be seen to be believed. The former track star and Team Sky rouleur was putting the best climbers in the world into serious difficulty up one of the toughest climbs in the tour. And he wasn't doing it with attacks, he was doing it with brute force riding strong tempo on the front. Late attacks from the elite climbers dropped Thomas momentarily but he showed incredible fight and strength to catch back up to the leaders and continue his charge at the front of the group. The sight of Quintana and Contador struggling to hold his wheel in the final 3km's was remarkable.

When the Sky train goes to work, it does so in order of strength. Normally Luke Rowe or Leopold Konig first, followed by Peter Kennaugh, Wouter Poels and Nicolas Roche. Remarkably this tour it has then been Porte to take control, followed by Thomas and Froome, suggesting that Thomas is on better form than Porte. And considering after Stage 12, Thomas sits fifth on the general classification, it's hard to argue. Currently he is ahead of Contador, Gesink, Nibali, Rodriquez, Rolland, Bardet, Talansky, and Pinot. And this is after back to back stages of over 15,000 ft of climbing.

We can only speculate, but with three of the hardest days of the tour over, and only 54 seconds off third place, it's not inconceivable to think Thomas could be joining Froome on the podium in Paris.

Who would have thought that 2 weeks ago?! Have you missed any of the action? We have you covered with interviews, race reports and team profiles here

The surprise has not been the form of Nibali, it has been his attitude. When things are going well, Nibali looks the goods.

On the cobbles of Stage 4 he was super aggressive and looked like tearing the tour apart, just as he had done the year before. He was fearless in his approach to the cobbles, not waiting for team mates to set the tempo, he attacked each sector and on several occasions split the peloton, causing problems for Froome. As good as Froome was on the day, you thought that the Shark might have had enough weapons to shake his confidence.

The team time trial was another example of Nibali's form, he rode up the final climb in second gear. While all of his team mates were churning their gears and clearly in distress, Nibali wouldn't have blown out a candle.

But time and time again this tour, when things have got tough, the Italian has dropped his bundle and seemingly given up without a fight. The Mur de Bretagne on stage 8, the La Pierre-Saint-Martin of Stage 10 and the Cote de Cauterets on Stage 11. These are all moments that got the better of Nibali, each time the pace increased and the moment came to fight, he didn't. You could see it in his face, almost a look of disinterest. He wasn't hurting, he wasn't suffering, he did not look like a man that was prepared to give everything in defence of his 2014 title.

Rumblings of disharmony with Astana Pro Team director Alexander Vinokourov have suggested this might have something to do with it, Vino even quoted as saying, "something is broken in his head." But even so, the 2014 Tour de France title belongs to him, not Astana, so you would think pride would overrule spite, and Nibali would give everything to defend his title. The 2014 Tour was an exciting time for French cycling. At the completion of the tour they had taken second and third step on the podium, the top two positions in the best young rider competition and French team, AG2R La Mondiale had even won the team classification.

Jean-Christophe Peraud has been a shell of his 2014 self, currently sitting over 42 minutes down on GC. Last years runner up has not looked likely in any of the mountain stages, and has cracked very early on all of the serious mountain passes. Team mate and future star Romain Bardet suffered heat stroke and was visibly sick on the bike as a result. There's no doubt this zapped his energy, but even before that he didn't have the strength when it mattered.

Thibaut Pinot has probably been the biggest disappointment of the tour. He came into the race on white hot form, winning a mountain stage at the Tour de Suisse and performing the best of the GC contenders in the opening time trial. But it has been all down hill from there.

His tour was effectively over on Stage 4, following a disastrous day on the cobbles. He had a mechanical, which he could not be blamed for, but his reaction and consequent result was largely due to his attitude. He would not accept a bike from a team mate because it didn't fit him just right, so he waited for the team car. Too long as it turns out. Contrast that to Tony Martin, who also has a mechanical and also had the option of taking a team mates ill-fitting bike, and who went on to win the stage. 4. Next Porte of Call

Richie Porte labelled it, "the worst kept secret in cycling", but in actual fact it was a pretty good secret until he let the cat out of the bag... on national TV!

There were rumours, as there always are when riders (or sportspeople for that matter) are out of contract, but nothing confirmed and we still don't know where he is actually going. The talk of the town has been BMC Racing Team, but with Tejay and Dennis both hoping to lead the team into the future, it seems a strange choice given Porte will be chasing GC victories.

What made the 'announcement' even more surprising was that it came during the tour, immediately after a stage, and in a very matter of fact way. Initially it appeared as though it had slipped through without notice from the broadcasters, but soon became headline news.

Porte's performance so far has been flawless and he has only increased his worth on the market (if indeed he is still on the market).

We'll watch on with intrigue to see where the Aussie ends up. We all know the Tour de France doesn't give out gifts or favors. Just take a look at the casualty list from the first week of racing. Everything the riders achieve is only done through incredibly hard work and attention to detail, and even then it's not guaranteed. Tony Martin can vouch for this better than most.

On stage one he finished five seconds off the stage win, and it appeared his opportunity to wear yellow was over.

On stage two he worked tirelessly for his team and had it not been for time bonuses, he would have been wearing yellow.

On stage three, the epitome of heartbreak, less than a second off wearing the jersey. 0.6 second in fact.

If you believed in things happening for a reason, you would think the universe was conspiring against Martin.

And then came Stage four...

Again, it seemed fate was working against Martin. He had a mechanical late in the stage and it looked as though the race was getting away from him. He quickly jumped on a team mates bike, and began the chase in earnest. Amazingly he was able to rejoin the front group, and then with 2.5 miles to go and most riders "on their hands and knees", he attacked. And as they say, the rest is history. It was an emotional win for Martin and the team, three days of heartbreak followed with elation.

Martin was eventually forced to withdraw from the race with a broken collarbone, but his time spent in yellow was a reminder that fairy tales do come true... sort of. Thanks Graham Watson for the great images.