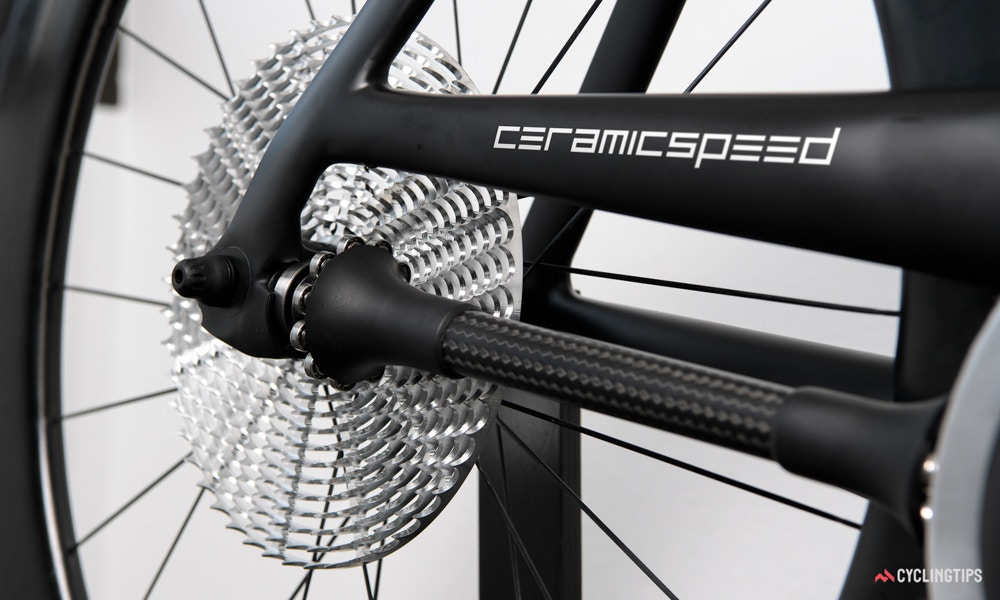 Eurobike is the world’s largest cycling trade show, and for 2018 it’s been moved forward seven weeks from its traditional date in late August. Overlapping with the Tour de France, July now serves as a melting pot of new and exciting bike tech for us two-wheeled fanatics to drool over.

With more than 1,500 exhibitors, the show serves as the launching pad for thousands of new products, across the cycling industry. E-bikes increasingly dominate the floor space, however, there’s still more than enough new and emerging bike tech on show to appease everyone from purists through to purveyors of the cutting edge.

With thanks to our mates at CyclingTips who were on the ground walking the halls, we’ve rounded up our picks of the best new bike tech on show at Eurobike 2018, Queue the bike-envy. 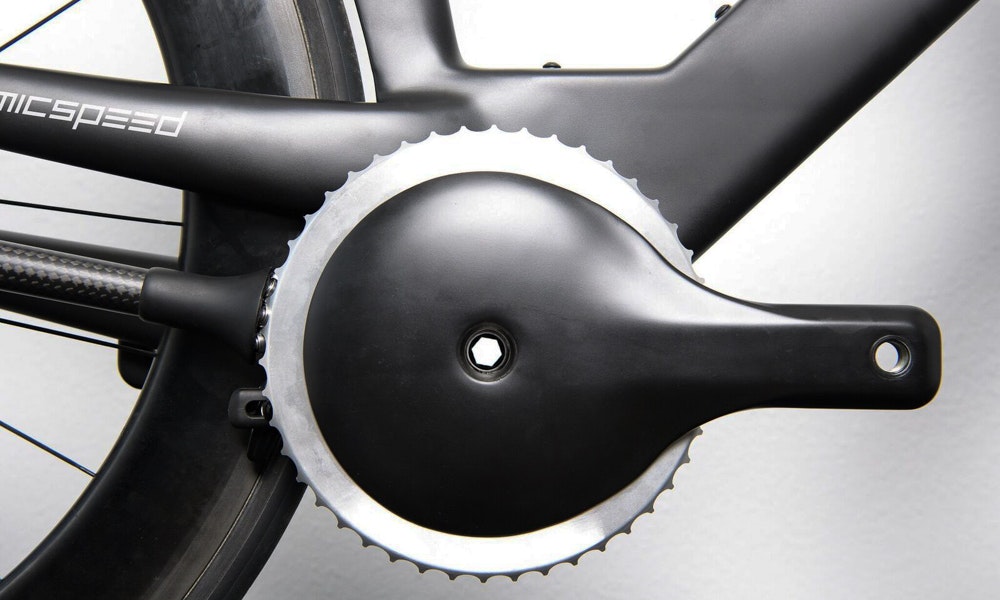 CeramicSpeed’s new DrivEn drivetrain concept — developed in cooperation with a student research team at the University of Colorado in Boulder, Colorado — uses a novel shaft-drive design that the company says eliminates sliding friction almost entirely. For more details, check out CyclingTips who covered the DrivEn in detail. 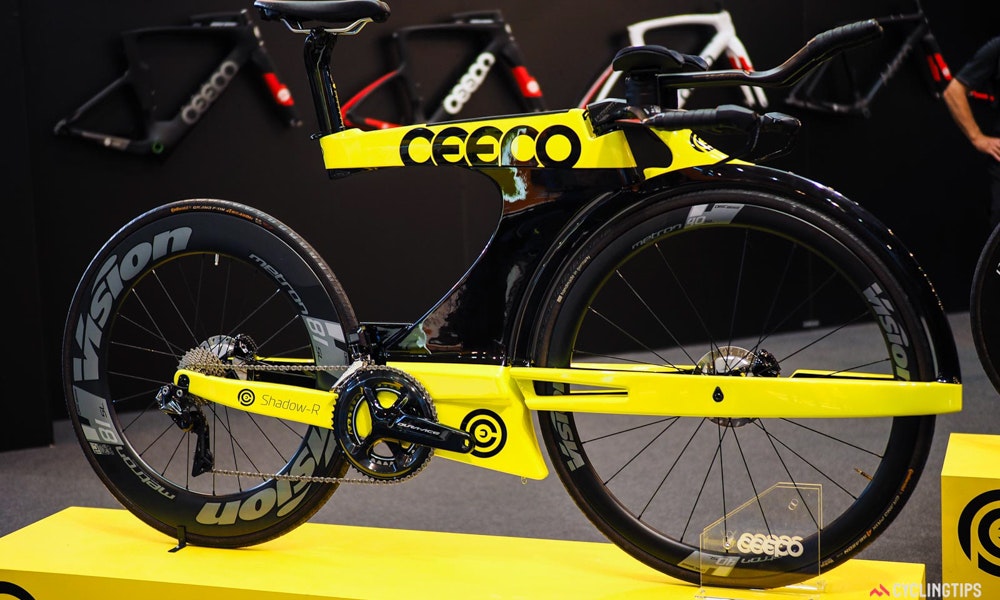 The Ceepo Shadow-R triathlon bike is a perfect example of what’s possible when bike companies aren’t restricted by UCI technical guidelines. The radical shape – and especially the wild fork – is specifically designed to minimize how much surface area is presented to the wind.

Ceepo says the fork on the Shadow-R is not only more aerodynamic than a conventional double-legged fork, but also more comfortable since the whole structure basically acts as a leaf spring on bumps. That said, the fork also weighs a whopping 1,450g despite being made of carbon fiber, while the frame adds another 2,230g. 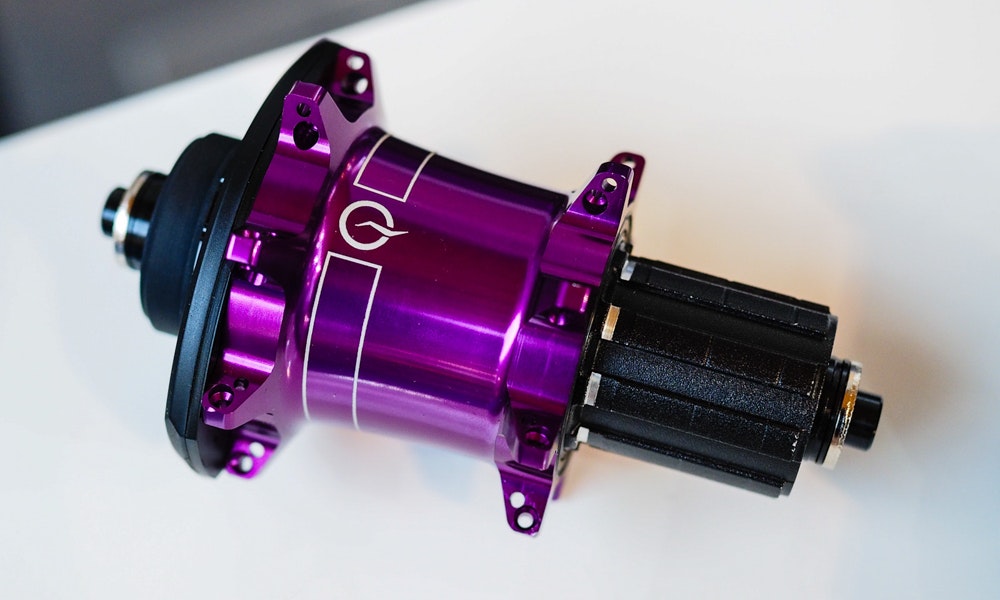 PowerTap finally has a disc-compatible power meter hub again. The new G4 works with standard Center Lock rotors, not the proprietary ones from before. And before you get too excited about the purple hue, keep in mind that it’s basically just for show. Production versions will be matte black.

The new PowerTap G4 power meter rear hub will also be USB-rechargeable via a magnetic dongle, and you won’t need to remove the rotor to access it. 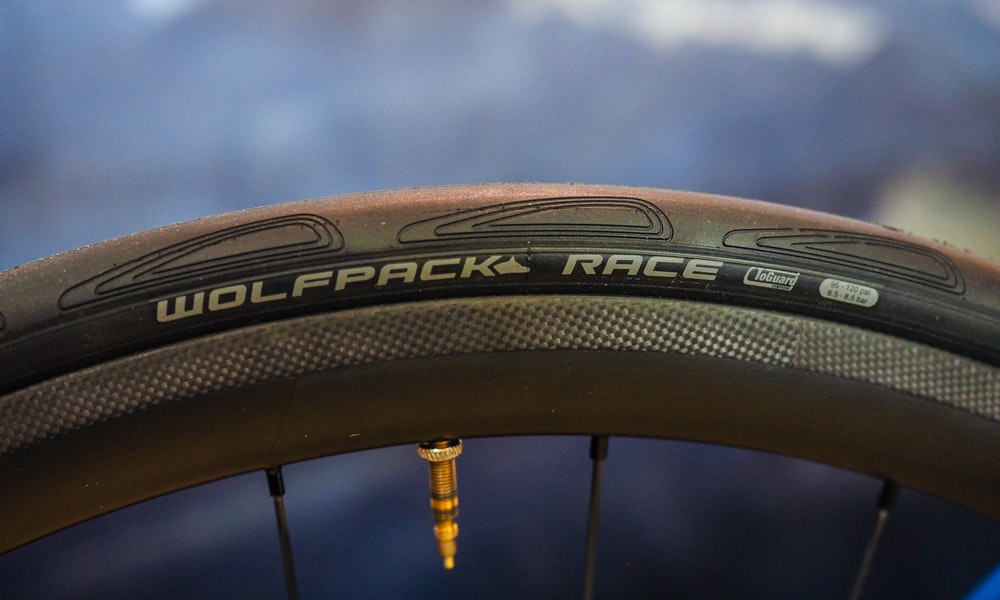 Wolfpack is a new brand created by Wolfgang Arenz, the tire guru responsible for the Continental Black Chili, Specialized Gripton, and Schwalbe Addix rubber compounds. According to Arenz, tires have gotten efficient enough in terms of rolling resistance, so he’s focused on improving grip for better handling and improved safety.

The brand is launching with just three road tires (two clinchers; one tubular) and three mountain bike tires for now, but more are certainly on the way. It seems safe to say that despite Wolfpack’s modest launch, the other tire companies for whom he’s worked in the past may be just a little bit concerned with where the brand goes from here. 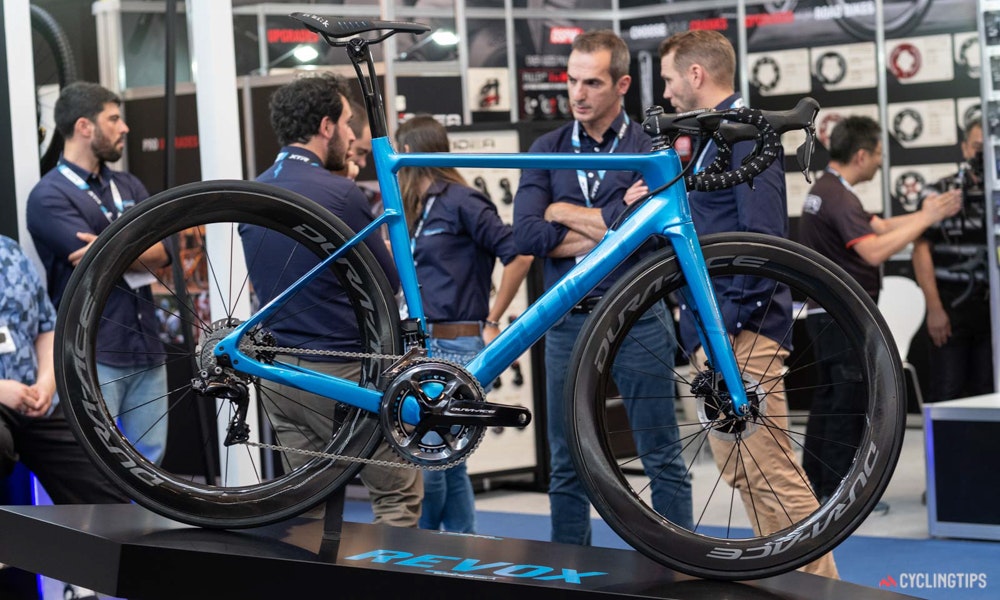 SwiftCarbon was founded in South Africa but now has a Portuguese owner. The Revox is the latest road bike from the company, designed as an all-around race bike. There are some aero elements, but it’s not a wholly integrated design. Most interesting, there’s just one frame that features mounts for both flat-mount disc brakes and direct-mount rim brakes. The fork is changed depending on which way the customer chooses to go. Like that paint? All SwiftCarbon frames are now painted in Portugal. 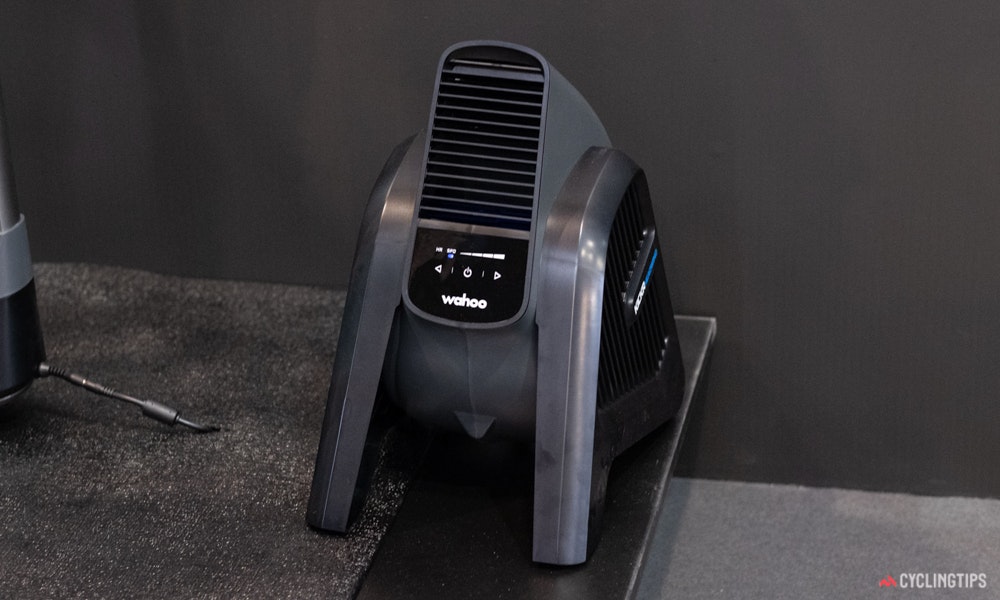 Wahoo Fitness had a busy Eurobike, pulling the covers off two new products and giving an update to its flagship KICKR Smart trainer.

Eurobike. The new KICKR Headwind (US$249), something many will be a fan of (pun intended). This fan directs air at the rider and can sync with a heart rate strap, speed sensor, and/or KICKR trainer to automatically ramp up the fan speed based on your exertion level. Flip-down legs at the back allow it to be mounted on the floor or a table, while still aiming air where it needs to go. The next phase will be for third-party platforms to work it into the experience, offering headwinds and breezes on descents. 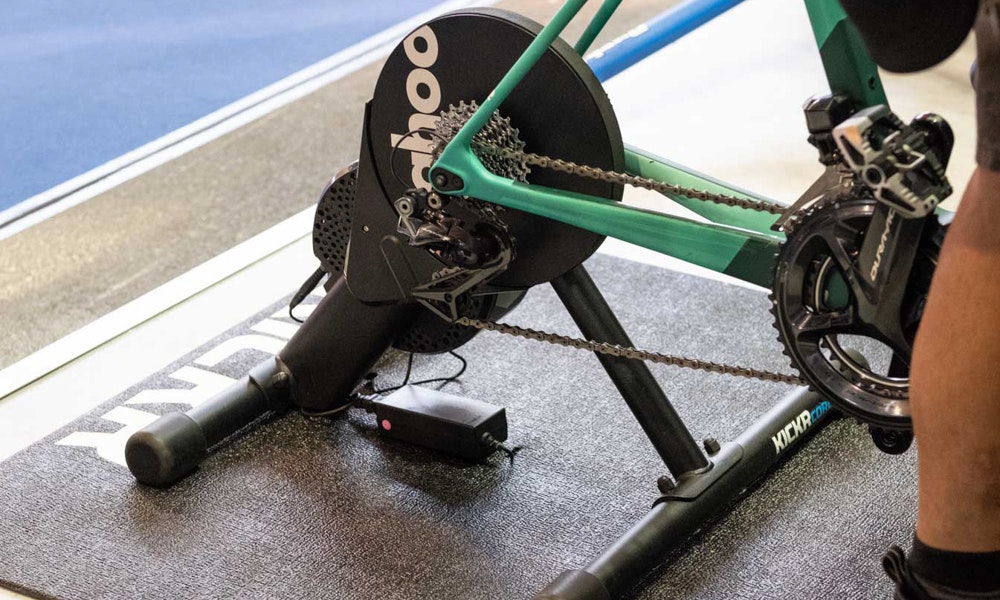 The new Wahoo Fitness KICKR Core fills the gap between the top-tier KICKR and the budget KICKR Snap. At US$899, it’s a pared-back version of the flagship version, offering a lighter 12lb flywheel, a simpler frame design, and 1,800W of maximum resistance. 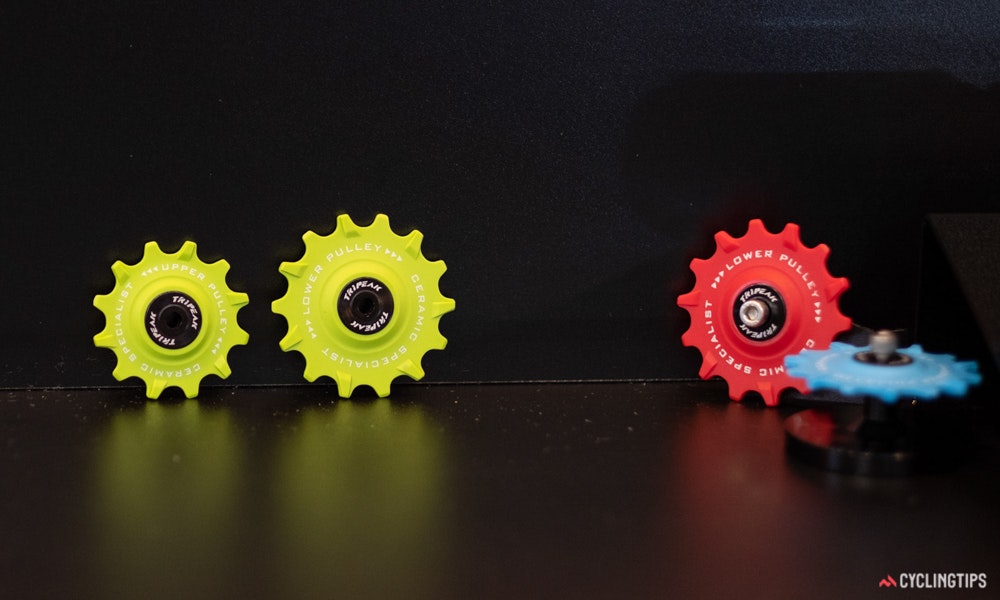 Tripeak was one of the first companies to offer thread-together bottom bracket solutions for press-fit shells. New to the catalog are oversized rear derailleur jockey wheels with hybrid ceramic bearings that fit within existing Shimano R9100 and R8000 derailleur cages. The 12-tooth upper and 14-tooth lower pulleys replace the stock 11-tooth wheels, which should slightly decrease drivetrain friction. If there’s as much extra room in the stock cage as claimed, such a component upgrade will likely become available from a number of other manufacturers. 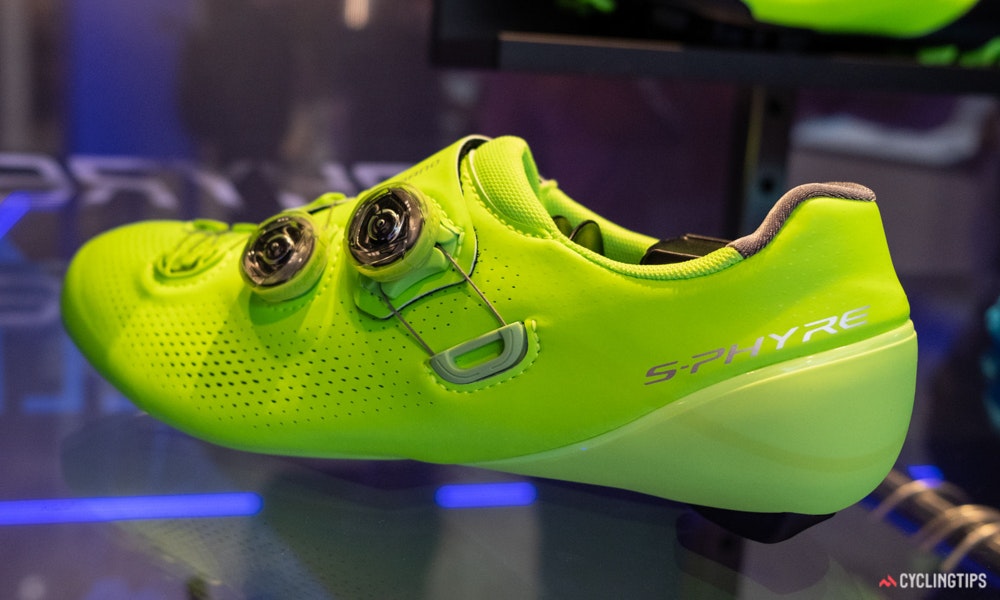 Last year’s Shimano S-Phyre RC9 race shoes have been updated for this season. The new RC901 see just a handful of small improvements, including a heel cup that’s said to be more forgiving of various foot shapes.

The biggest changes are made up front. Gone are the mesh panels, replaced with generous perforations in the material. This is said to keep the shoe more aerodynamic and prevents the material from creasing. The larger perforations at the ball of the foot are designed to allow a little material flex, something that should be welcomed on a hot day with swollen feet.

The off-road crowd hasn’t been ignored by Shimano, either. The new S-Phyre XC-901 receives similar tweaks to the road version, but most notably, the treads are now molded with the sole, and a more generous toe guard protects the foot from rock strikes. 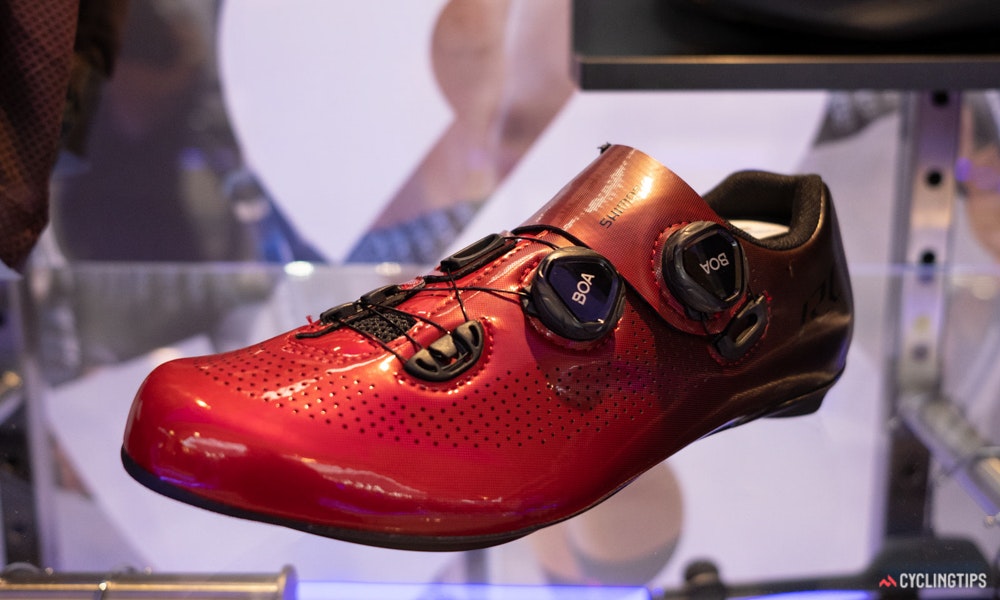 New for 2019, the S-Phyre RC-701 is Shimano’s second-tier road race shoe. It’s now more similar to the RC-901 in both aesthetics and performance and features a carbon fiber sole that sits at 10/12 on Shimano’s stiffness index. 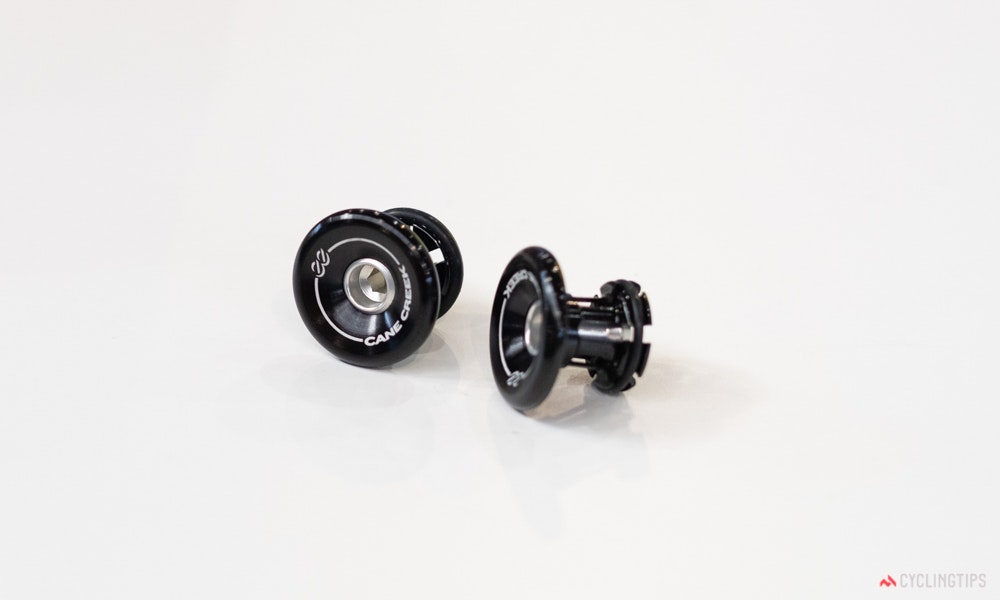 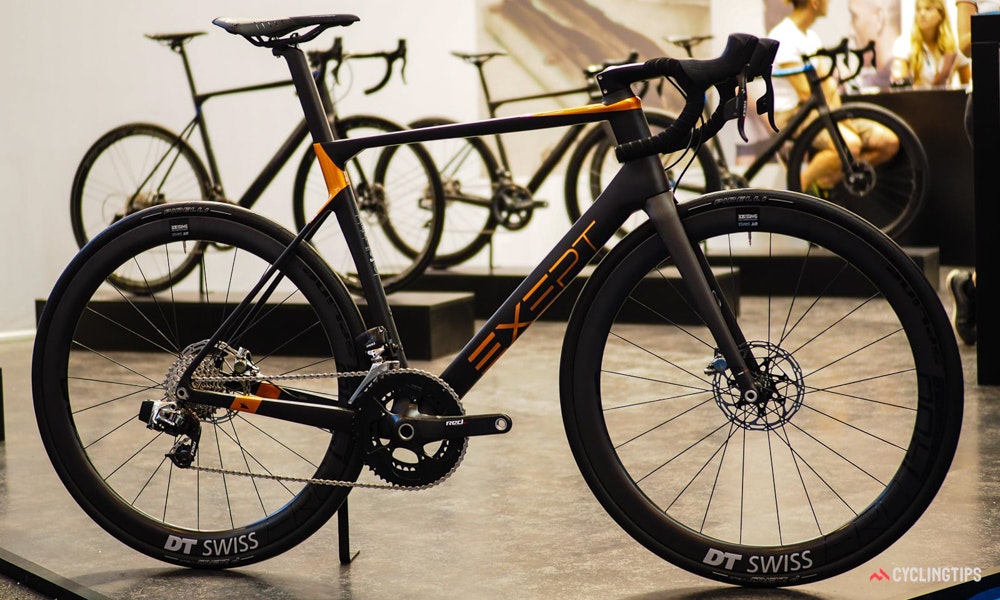 New Italian company Exept is crafting modular monocoque carbon fiber road frames in Italy. That in and of itself isn’t hugely groundbreaking, but what’s interesting is that the company is also offering fully custom geometry. The company is currently offering two main styles of bike: a more race-oriented model with more obviously aero-inspired tube shaping and a more integrated fork and cockpit, and this more classically designed version that uses more rounded tube shapes, a conventional cockpit, and a round seatpost.

Since Exept doesn’t do stock bikes – and has no plans to produce in higher volumes – the company can get away with novel handwritten specs on the seat tube of each frame it produces. The frames also have ISO testing certification, which is not only very rare for a small custom builder like this but very reassuring for the rider.

Since every frame is built to order, customers have their choice of color accents and cable routing as needed. Want rim brakes? Best to look elsewhere, Exept has launched exclusively with disc-brake frames 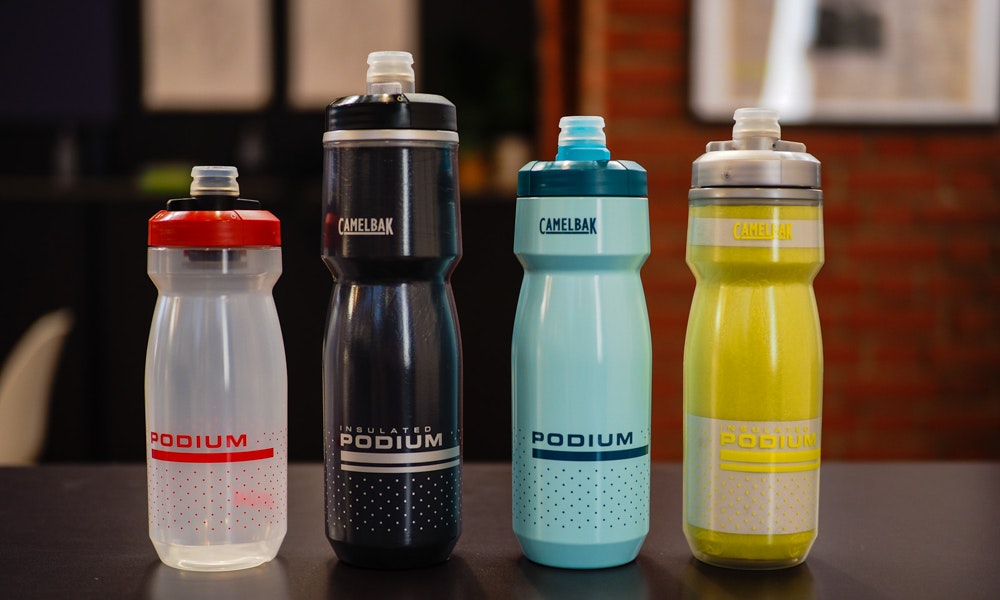 Camelbak has redesigned its popular Podium water bottles. This third generation features an all-new shape that’s compatible with more cages, it’s more squeezable than before and even easier to clean. As before, there will be both small and large sizes, plus insulated versions.

The new cap can be easily and completely disassembled for very thorough cleaning – perfect for riders who regularly fill their bottles with sugary energy drinks, whilst there is also an optional rubber cap that helps keep trail debris out of the nozzle 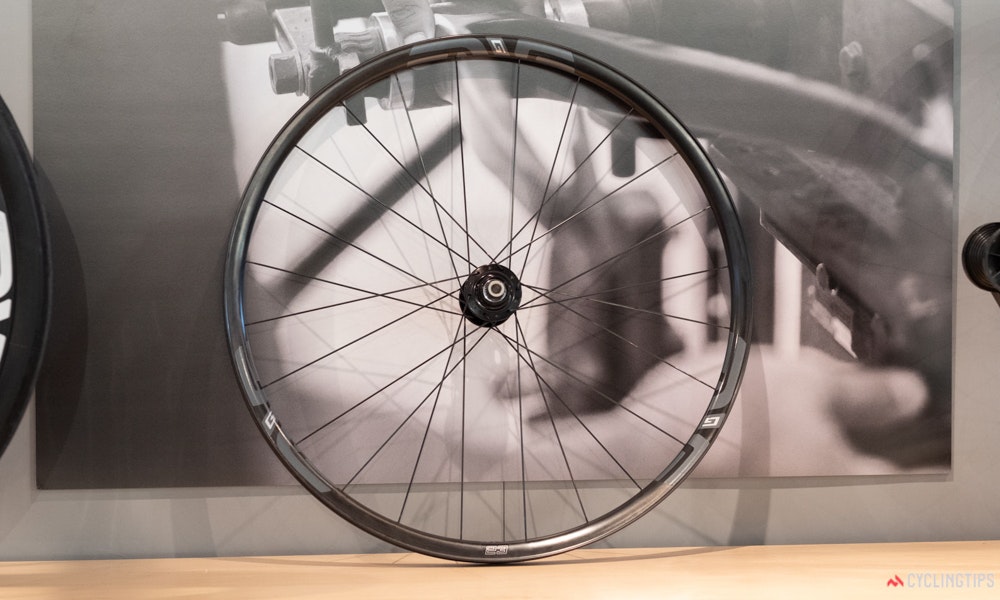 Announced at Dirty Kanza, Enve’s G Series wheels are one of the first truly dedicated gravel wheelsets on the market. Super light and designed to prevent pinch flats at the tire, these provide clear insight as to where gravel wheels are headed. 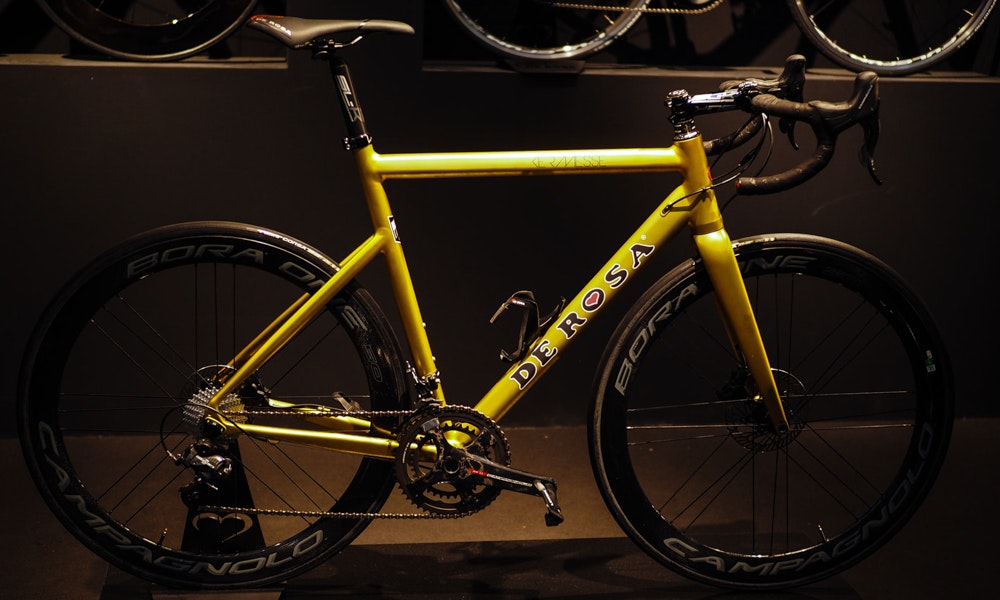 De Rosa’s Kermesse welded aluminium road bike is designed to be a workhorse racer – just as the name suggests. There’s no word on pricing just yet, but it sure does look pretty. 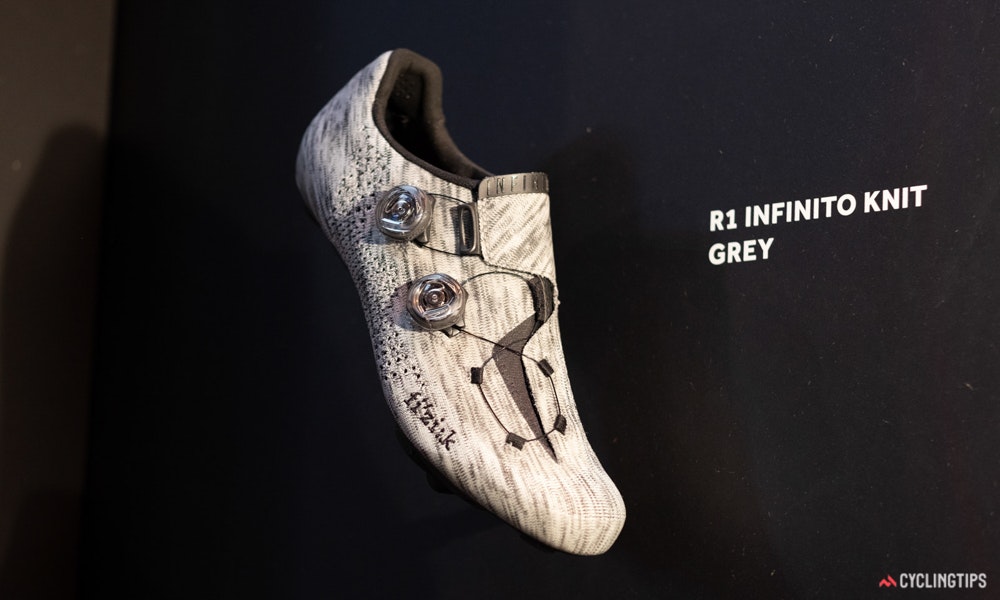 Fizik has expanded its R1 Infinito Knit shoe color range. Being able to design such patterns is one very obvious benefit for the new knitted technology. 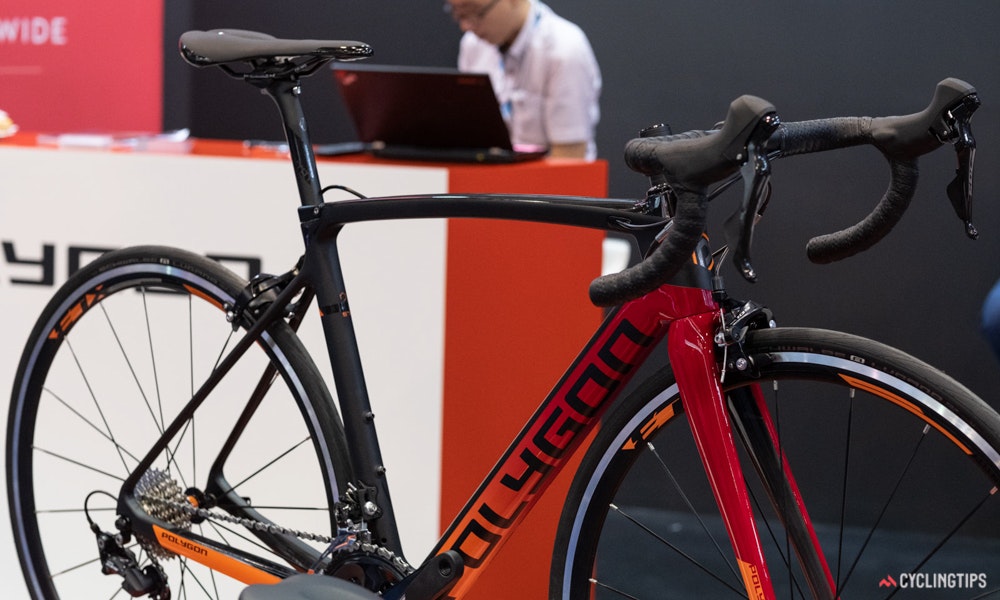 The new Polygon Stratos S7 offers stellar value with its full-carbon frameset and Shimano 105 groupset for under AU$2,000 (€1399). The S7 offers a number of high-end features, such as a tapered fork steerer, an integrated seatpost clamp, and internal cable routing. 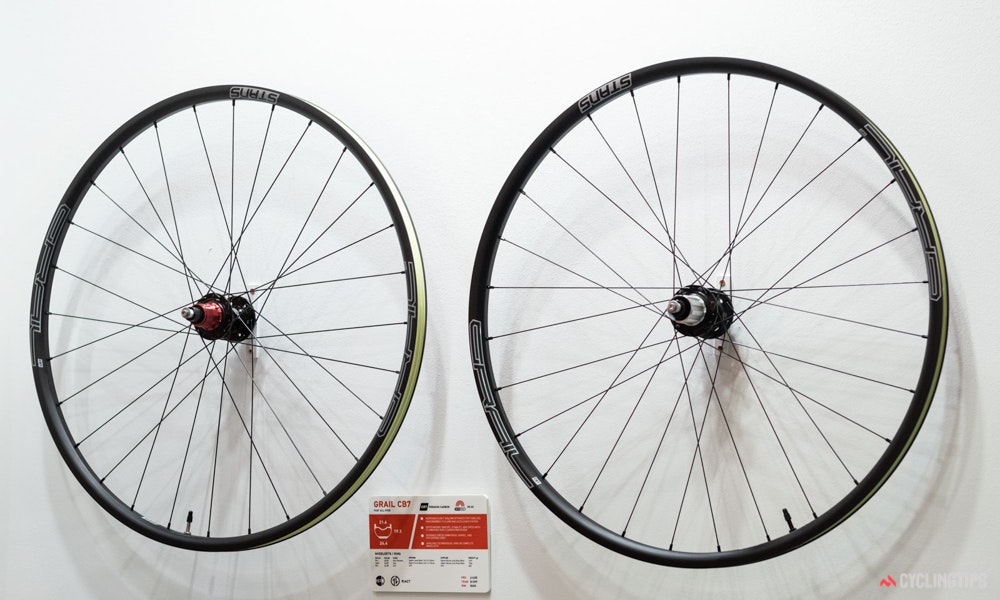 Stan’s NoTubes has updated its gravel range. The Stan’s NoTubes Grail CB7 is built with a 21.6mm internal width that’s meant for tires between 25-40c. Claimed weight for the top-tier version is just 1,277g, and retail price is US$1,635. The wheels are said to be more compliant and stronger than the alloy Grail wheelsets. 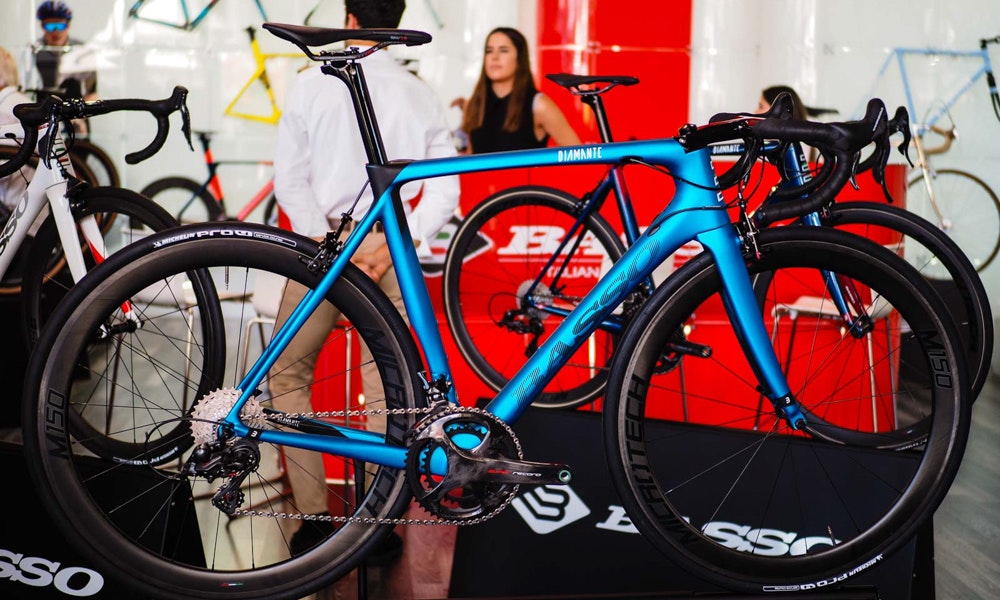 Basso’s latest Diamante uses more rounded tubing than before in order to make a more structurally efficient (read: stiffer and lighter) frame than previous editions. The “monolithic” front end still looks unusual despite the fact that several other brands have adopted similar design philosophies in recent years. According to Basso, the frame is wholly produced in Italy, from lay-up to molding to paint and assembly. 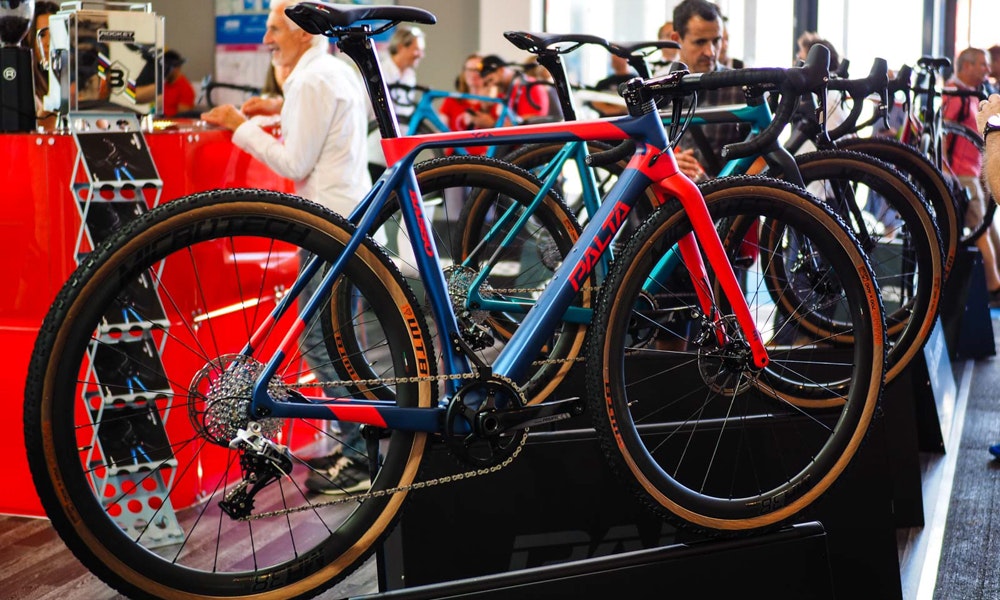 Gravel bikes are definitely hot in the United States, but they’re definitely not quite on everyone’s mind in the halls of Eurobike. That said, Basso’s new Palta model is one of a handful we saw from European companies that seems to properly fit the bill.

Tyre clearance is said to be very generous on the Basso Palta, with plenty of space around the 38mm-wide WTBs the bike was shod with. The Palta also featured a hidden seatpost binder and a third bottle mount on the underside of the downtube, perfect for those considering the steed for bikepacking duties. 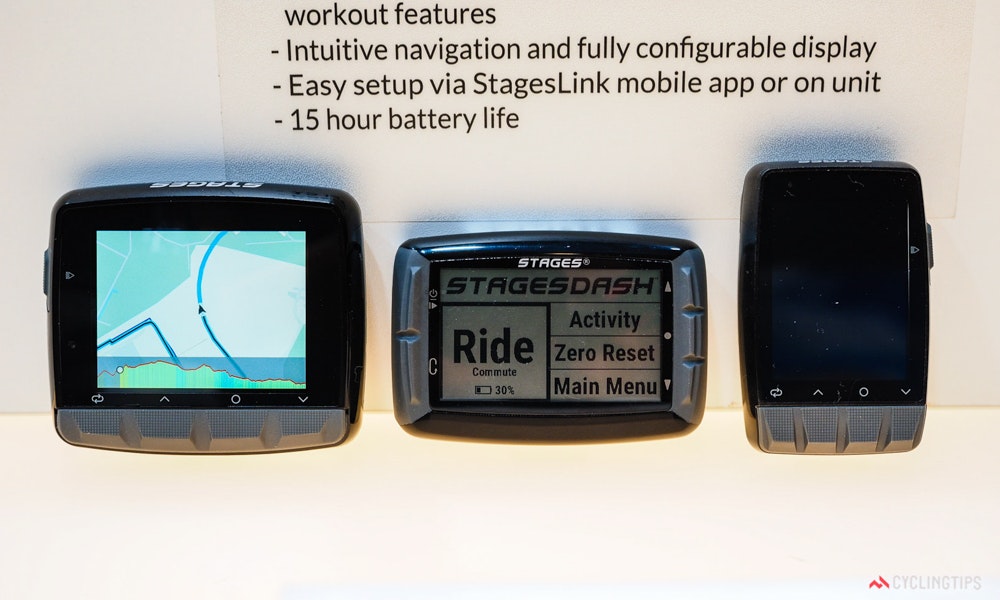 Stages Cycling expands its range of computers with the new Dash L50 (left) and Dash M50 (right). Both are still focused on power-based training like the original Dash (center), but now have GPS-powered mapping functionality and easier-to-use interfaces that should appeal more to riders that are less accustomed to training with power meters.

Both new computers have aluminium external frames that not only add a bit of visual flash but allow the computers to be mounted in either landscape or portrait orientations. A standard out-front road mount is included with each of the new Dash computers. Stages also offer a full range of other mounts to suit nearly every cycling application. All of them are made of machined aluminium, too, so there’s little motivation to look for aftermarket options. 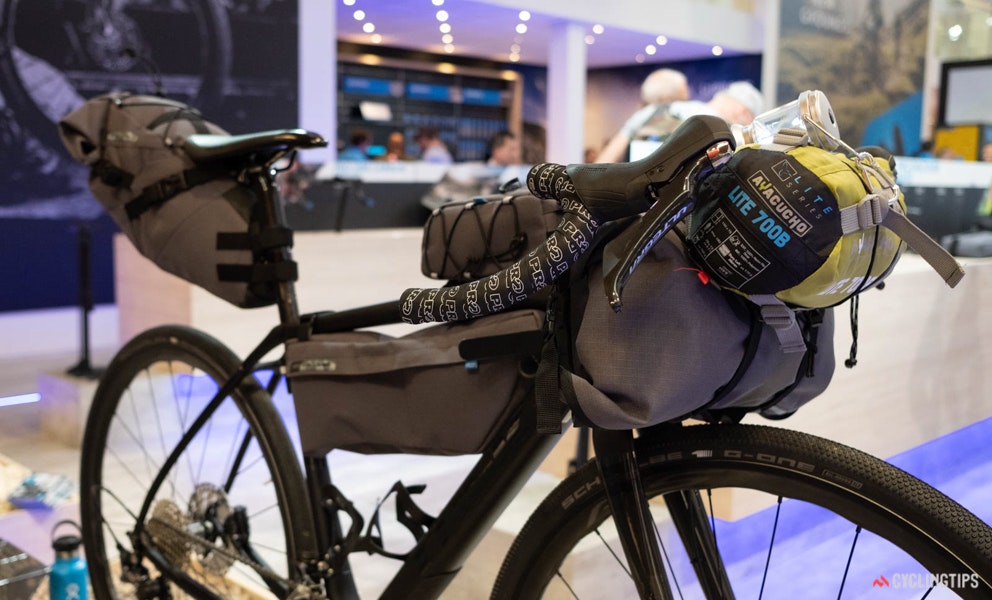 Has scouring the latest bike tech ignited your desire to procure goodies for your two-wheeled pride and joy? Browse the extensive range of cycling products available from leading retailers across the country right here, at BikeExchange