Find a store Blog
‹ back
Home
Blog
Features
The supertuck, super sprinters, and the Running Man: The 10 most memorable moments of the 2016 Tour de France

The supertuck, super sprinters, and the Running Man: The 10 most memorable moments of the 2016 Tour de France 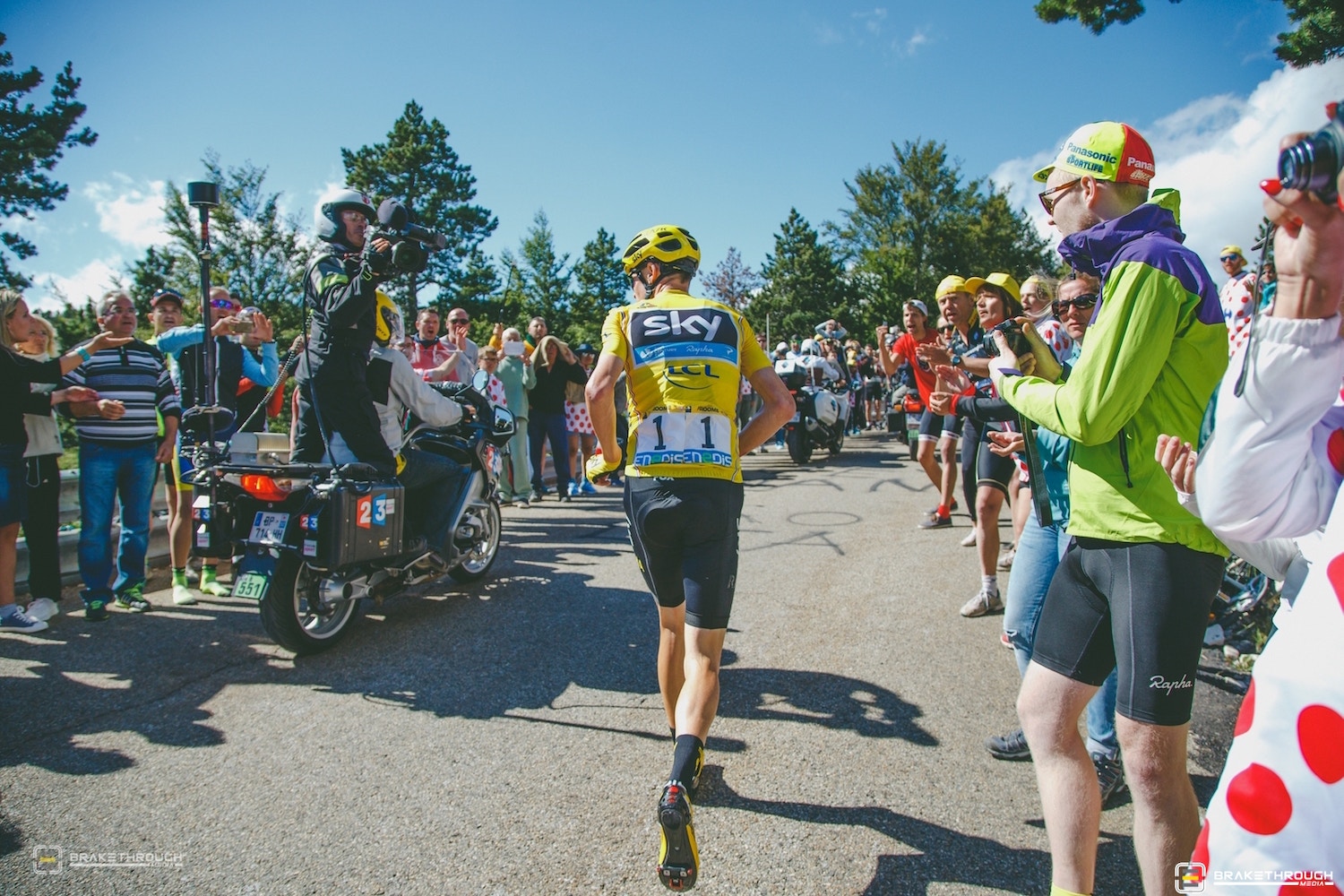 For a rouleur known for animating and then falling just short at one-day Monuments, BMC Racing’s Greg Van Avermaet unexpectedly took advantage of a hilly day to ride to glory on Stage 5. On a long traverse of the Massif Central, a grueling day that marked the end of Alberto Contador and Vincenzo Nibali as GC contenders, GVA and fellow Belgian Thomas de Gendt emerged as the strongest of a nine-man break. Then, on the category 2 Col du Perthus, Van Avermaet took off alone, grinding 17 solo kilometers to the finish, crossing the finish with his arms aloft and a five-minute gap to the field. Van Avermaet pulled on the yellow jersey and kept it for three days, a bright spot in an otherwise disappointing Tour for BMC.

The general classification battle heated up in bizarre fashion on the Peyresourde near the end of Stage 8. The climb itself was less torrid than it could have been, highlighted by Chris Froome punching a well-deserving “fan” in a Colombia jersey and a yellow mullet wig, but things took a surprising turn right as the select group rolled under the banner at the top of the climb. Just as Nairo Quintana, in second wheel, grabbed a bottle from a soigneur and took a long drag, Froome got out of the saddle and opened a small gap. There was a moment to react, and it passed. Froome had a 54-tooth oval chain ring on his bike and he churned it and then spun it with his body hunched on the top tube. It was not pretty, but it was effective. Alejandro Valverde, Richie Porte, and Tejay Van Garderen eventually gave chase, but Froome was able to supertuck his way to a 13-second stage win, plus a 10-second time bonus, and the yellow jersey, which he would not relinquish. At the time it seemed like a lot of effort for a little bit of time, but it foreshadowed the way Froome would dominate the Tour with aggressive moves.

Team Sky expertly controlled the GC battle but did it in a measured way that let quite a few breakaways stay away. In addition to GVA’s long solo, we were treated to dynamic wins by Jarlinson Pantano and Ilnur Zakarin. But perhaps the most impressive foray was from Dimension Data’s Steve Cummings on Stage 7. As the survivors of a 29-man breakaway got down to business, Cummings bridged up to Dani Navarro and Vincenzo Nibali (a stage hunter at this Tour who still couldn’t quite find his legs) and then dropped them with 25 km to go. From there, Cummings rode up the Col d’Aspin alone and descended to a magnificent solo win in Lac de Payolle. A week later, Cummings was selected to Great Britain’s Olympic team after Peter Kennaugh gave up his spot.

To say that Nairo Quintana, a dynamic climber who has legitimately challenged Froome in the past, was not at his best would be an understatement. Quintana’s entire Tour seemed like a lackluster disappointment. And yet, he somehow ascended the podium in Paris, an achievement that reflects his raw talent, his grit, and his tenacity as a stage racer. He had lots of mediocre days, but not one truly bad day or big mistake like Bauke Mollema, Richie Porte, Fabio Aru, and other riders who seemed poised to finish the Tour in a podium spot. Sometimes you can take measure of a racer not by how they perform when they are at their best but by how they survive when they are struggling.

Stage 11 concluded in Montpellier, a city that has hosted many bunch sprints in Tour history. But brutal crosswinds and a viciously smart attack flipped the script. With about 12 km to go, and the peloton already fracturing, Tinkoff’s Maciej Bodnar rolled off the front of the field. Teammate Peter Sagan immediately seized the moment and jumped on his wheel. Behind Sagan, Froome and teammate Geraint Thomas took chase. The time and effort it took for the Sky duo to close that small gap reflected the effort involved. With Froome and Sagan chatting — and Bodnar taking huge pulls and making pain faces — the foursome held off the field into Montpellier. Froome’s aggression did not subside in the final 200 meters and he sprinted for the line, forcing Sagan to work for his victory salute. Froome’s gap to the GC favorites was tiny — six seconds, plus six seconds in time bonus — but the statement was resounding.

Mark Cavendish’s run as the dominant sprinter of the Tour de France appeared to be riding into the sunset — or at least that how it seemed until the 2016 edition got underway in Normandy. There, at Utah Beach, Cavendish came off Sagan’s wheel and beat the world champ, as well as Marcel Kittel and Andre Griepel — in other words, the best in the world — to win Stage 1, and take the maillot jaune, one of the few accolades in the sport he was yet to achieve. He went on to notch three more wins — he nosed Greipel in a photo finish on stage 3 in Angers, beat Kittel on Stage 6 in Montauban, and then shut the door on Kittel on Stage 14, in Villars-les-Dombes Parc des Oiseaux. Cavendish left the Tour on the second rest day, before the Alps got nasty, with 30 career Tour stage wins, two more than Benard Hinault. Only Eddy Merckx, with 34, has more. The flat world championship course in Qatar will be one for the sprinters, meaning Cavendish could, hypothetically, wear yellow and rainbow stripes in the same season. Not bad for a has-been. On some key climbs, Team Sky paced and surrounded Froome with so many quality teammates that it was hard not to evoke the second coming of the dominant — and now discredited — U.S. Postal Service squad. But the reality was that Sky’s dominance was far more calculated. Movistar and Astana spent a lot of time (and, perhaps, a lot of wasted effort) at the front trying to soften up a stronger opponent (or dislodging contenders for minor placings). When attacks went up the road, the reaction from Sky typically was a minor but withering acceleration. Mikel Landa, Geraint Thomas (who handed Froome a bike when his captain slid out on the descent before Mont Blanc), Sergio Henao, and Mikel Nieve were present when it counted, and Wout Pouls was just a beast. The end product suffocated the race — hardly the ideal for fans hoping for a thrilling GC prize fight — but that ultimately was the failing of other teams and riders. Or the byproduct of Sky’s massive budget. Or all of the above.

While it was nearly impossible for anyone with GC ambitions to find a chink in Sky’s armor, Romain Bardet powered to a impressive win that no one saw coming on the tough slopes of Mont Blanc on Stage 19. With about 10 km to go, Bardet, who began the day in sixth overall, slipped away from the select main field and then bridged up to Portugal’s Rui Costa. When the road got truly steep with a few kilometers left, Bardet rode off alone and onto the GC podium. He ended the day in second place overall, leapfrogging Mollema, Yates, and Quintana – a totally unexpected triumph.

Wearing the rainbow stripes — until he settled into his customary green jersey — Peter Sagan won three tough stages in a dynamic show of force. On the painful looking uphill drag that concluded Stage 2 in Cherbourg, Sagan out-sprinted wunderkind Julian Alaphilippe, Alejandro Valverde, and a select group of classics specialists, to take yellow. Sagan was the key protagonist (and the winner) in the virtuoso crosswind attack that shattered stage 11. And he ended Stage 16 with a textbook bike throw that nudged Alexander Kristoff in yet another photo finish. Sagan took over the green jersey after Stage 10 and never gave it up, his fifth consecutive maillot vert. To underscore his speed and unmatched versatility, Sagan nearly overhauled Griepel on the Champs-Elysees. It was a beautiful three-week-long display by the world champ, who was rewarded as the race’s Most Combative rider, as well.

If there is one moment from the 2016 Tour de France that will be remembered for eternity, it surely will be the sight of Chris Froome clattering up the steep slopes of Mont Ventoux without a bicycle. It was chaotic, unfortunate, hilarious, gutsy, and destined to be achieve YouTube glory while set to the Benny Hill soundtrack. Of course it highlighted institutional problems with crowd control and motorcycles in the race, but it also demonstrated what’s so oddly special about the Tour de France — an elite sporting event where truly anything can happen. Since Froome went on to ride the Champs Elysees in yellow, the episode can safely be archived as a bizarre and immortal footnote to the 113-year-old Tour de France.