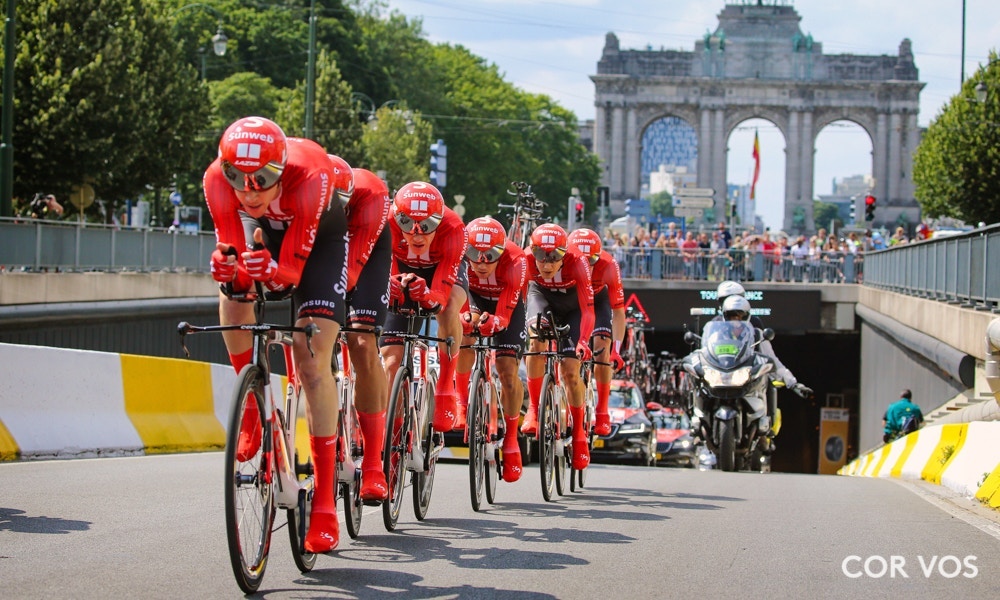 BRUSSELS, Belgium – Mike Teunissen and his Jumbo-Visma squad have taken out the sole team time trial on stage two of the 2019 Tour de France. The win increases Teunissen's advantage in the race for the Maillot Jaune with the Dutchman now holding a 10-second advantage over teammate and former cyclocross prodigy Wout Van Aert. Despite being a man down early, with Dylan Groenewegen still struggling from his fall in stage one, The Dutch squad put in a powerful display over the 27.2km long course, eclipsing equal stage favorites Team Ineos and world team time trial champions, Deceunink-Quickstep, who both rounded out the podium. All 22 teams remained in Brussels for stage two, rolling around a relatively flat course that passed by many local attractions in the Belgian capitol city. Team Ineos was the first squad to roll down the start ramp, setting an impressive pace early that would see them sitting in the figurative hot seat for much of the day with a time of 29m 17sec. As teams continued firing shots at the British squad, one-by-one they missed the mark. Katusha-Alpecin was the first squad to eclipse and Team Ineos at any checkpoint, starting out with a hot pace to take the first checkpoint by four seconds. However, the squad began to fade with the time gap dwindling to 1 second at the halfway mark with the team finishing six seconds off the pace.

It was bad news for GC hopeful Ritchie Porte, as his Trek-Segafredo squad languished towards the bottom of the timesheets, finishing over a minute down on eventual winners Jumbo-Visma. “It’s not ideal,” Porte said. “Obviously we lost Koen quite early, maybe after his crash yesterday. We’ve done the reconnaissance and the Pyrenees are always hard, but the Alps this year; the last three stages are brutal. Whilst the Tour isn't one on stage two, Porte remained optimistic, adding that “The last week is definitely where it’s going to be won. It’s never nice to lose time like that, but there’s still a long way to go.”

Mitchelton Scott was also slightly off the mark finishing 42 seconds down in 11th place. The Australian squad was one of the headline favorites to win the stage; however, a hard start on the fast course caught the team out with Luke Durbidge adding “We maybe started a little too hard and blew up a bit towards the end. But we gave everything for Adam (Yates) and Adam was very impressive today.”

Jumbo-Visma was the last team to roll down the start ramp. The eight men of Ineos could only watch on in amazement as the Dutch team obliterated Katusha's time at the first and second checkpoints, going ten seconds up at 13.2km, and 15 seconds up at 20.1km. The stage win was enough to move Wout Van Aert up into the white jersey, as well as extend Teunissen's lead in the GC the hot favorites.

Stage 3 from Binche on the Belgian frontier to Epernay will have the roleurs such as Peter Sagan (Bora-Hansgrohe) and Michael Matthews (Sunweb) champing at the bit for a chance to spray champagne in the region that makes the drink world-famous. The majority of the 215 km stage follows a relatively flat parcours, but the finale is anything but, with the last 50 km serving up four categorized climbs and another four just as tough. The finish looks set to be technical, with narrow roads, and a sharp rise up to the line that may see a surprise winner atop the podium yet again. 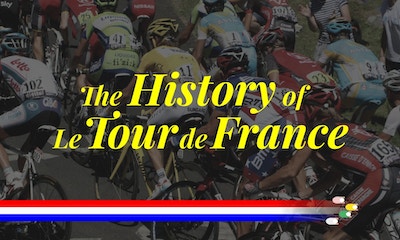