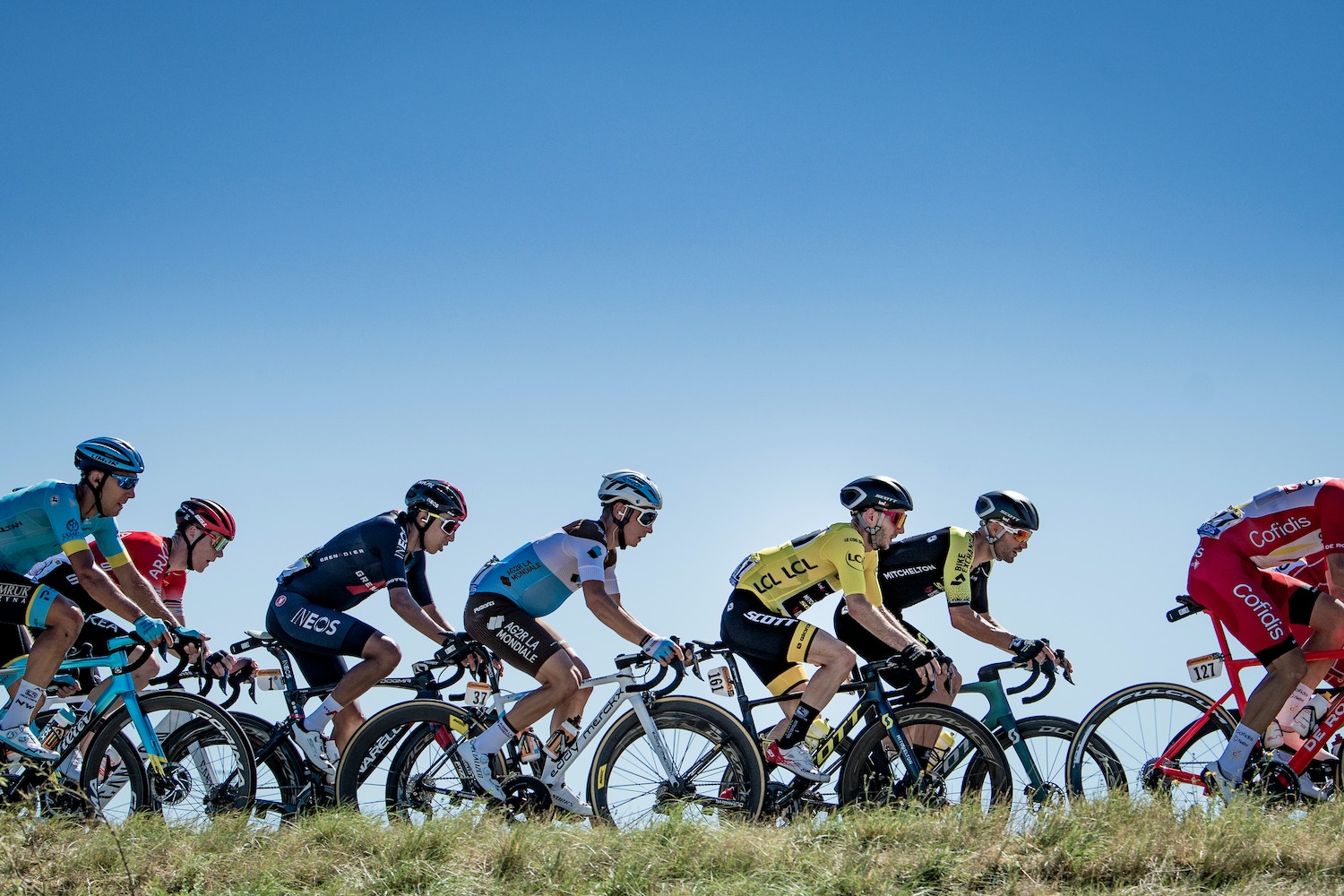 From a small select group at the front of the race, Wout van Aert (Jumbo-Visma) takes his second stage win of the 2020 Tour de France.

The strongman from Belgium bested the remains of a select group, including Peter Sagan (Bora-Hansgrohe) that rode through devastating winds, at blistering pace all day. 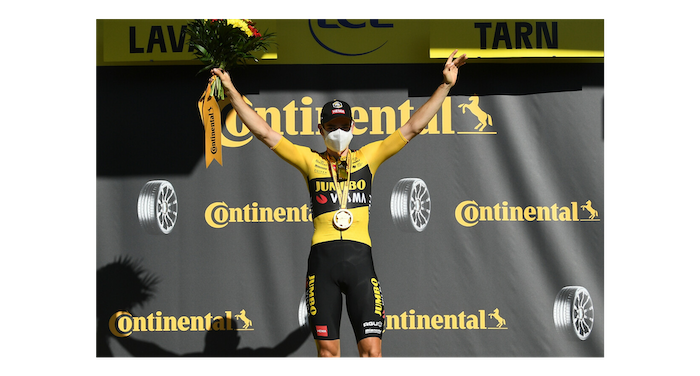 After his second stage win, the Belgian said, “I’m really proud of this one. Straight from the gun, it was all-out, actually. I have to say impressive stage from Bora-Hansgrohe. They went flat out on the first KOM and made sure that a lot of sprinters were dropped. Afterward, it was always hectic and everybody feared the crosswinds, and in the final, we saw it was worth it to put a lot of energy in the position.”

Sagan reasserted his authority over the green jersey, despite a mechanical issue in the final 100m of the race which cost him precious additional points

Taking second in the intermediate sprint and then winning the day, the seven-times green jersey champion seemed to be back in his form of years past.

From the gun, Bora-Hansgrohe attacked, fracturing the peloton.

And this was just the start of the troubles for so much of the peloton, when Bora’s attack and relentless paced was aided by devastating winds. 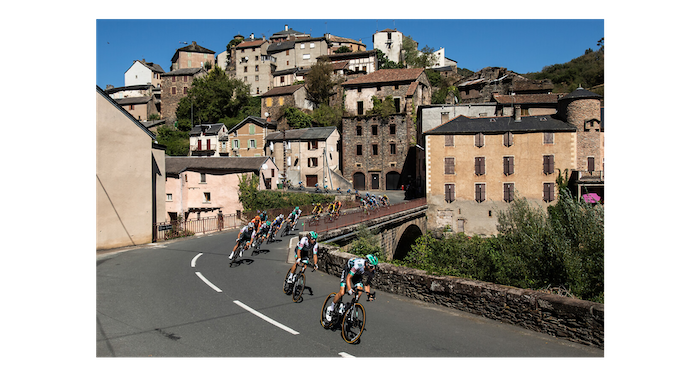 Julian Alaphilippe (Deceuninck-Quick-Step) and the current wearer of the yellow jersey Adam Yates (Mitchelton-Scott) made the initial split with Bora-Hansgrohe driving the front.

The green jersey of Sam Bennett (Deceuninck-Quick-Step) and the polka dots jersey of Benoit Cosnefroy (Ag2r-La Mondiale) were put in serious jeopardy before the stage hit the halfway mark.

Further behind the KOM and points jersey group with 120km to go was the winner of stage 3, Caleb Ewan (Lotto-Soudal).

By 100km of racing left, Bora-Hansgrohe had put 71 riders in jeopardy of not making the time cut.

Seeing an opportunity for a break, Thomas de Gendt (Lotto-Soudal) attacked the yellow jersey group which was still being driven by the Bora-Hansgrohe train, and got a maximum advantage of 45 seconds.

B&B Hotels came to the front to help Bora-Hansgrohe keep the break-neck pace.

De Gendt played keep-away for 60km until Dylan Van Baarle, Michael Kwiatkowski, and Jonothan Castroviejo (all Team Ineos Grenadiers) went to the front to pull back this break, and they then upped the pace into the crosswinds section, blowing up the front of the race.

This move split the bunch — Alaphilippe and Yates found themselves on the right side of this, while Tadej Pogačar (UAE – Team Emirates) Richie Porte (Trek-Segafredo), and Mikel Landa (Bahrain-McLaren) found himself on the wrong end of this split at 35km to go.

This left the front of the race in tatters, with just 38 riders, with Astana and Jumbo Visma having the best numbers in the final 10km.

Taking advantage of these numbers — and a wind that was shredding the peloton — van Aert made his way to the front with fresher legs, and timed a late-launched dash to the line. 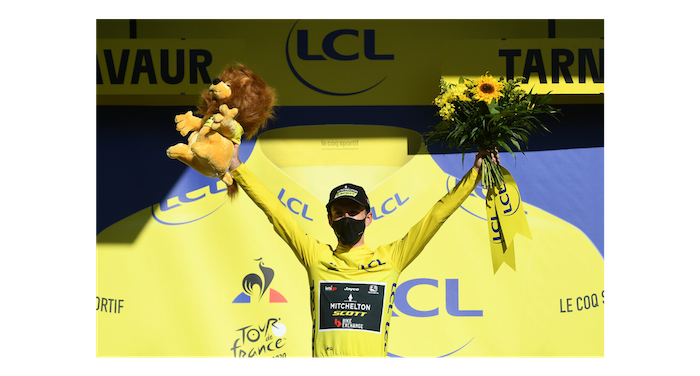 “I was with Primož [Roglič] the whole stage in the front. It was a good day for the team, and a few favorites in the GC lost some time. And a good finish as well, so incredible. wow.”

Peter Sagan, who looked to be in perfect position for a stage win, and who was protected by his team all day long, suffered mechanical misfortune, costing him precious green-jersey points.

“I’m disappointed. We controlled the race today, with my teammates doing a super job. Everything seemed very good and then I had bad luck in the final. My chain just dropped and I didn’t earn as many points as I wanted… but that’s cycling. I’m proud of all my teammates. They fought very hard from the beginning until the end. I can win the green jersey on stages like today, although with a different finale. Everything was very nice but the end was… f*cking cycling.” 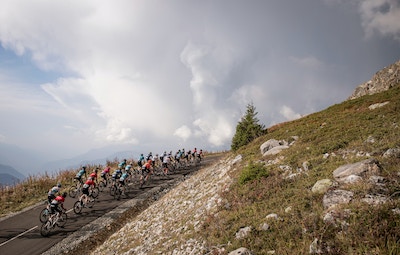