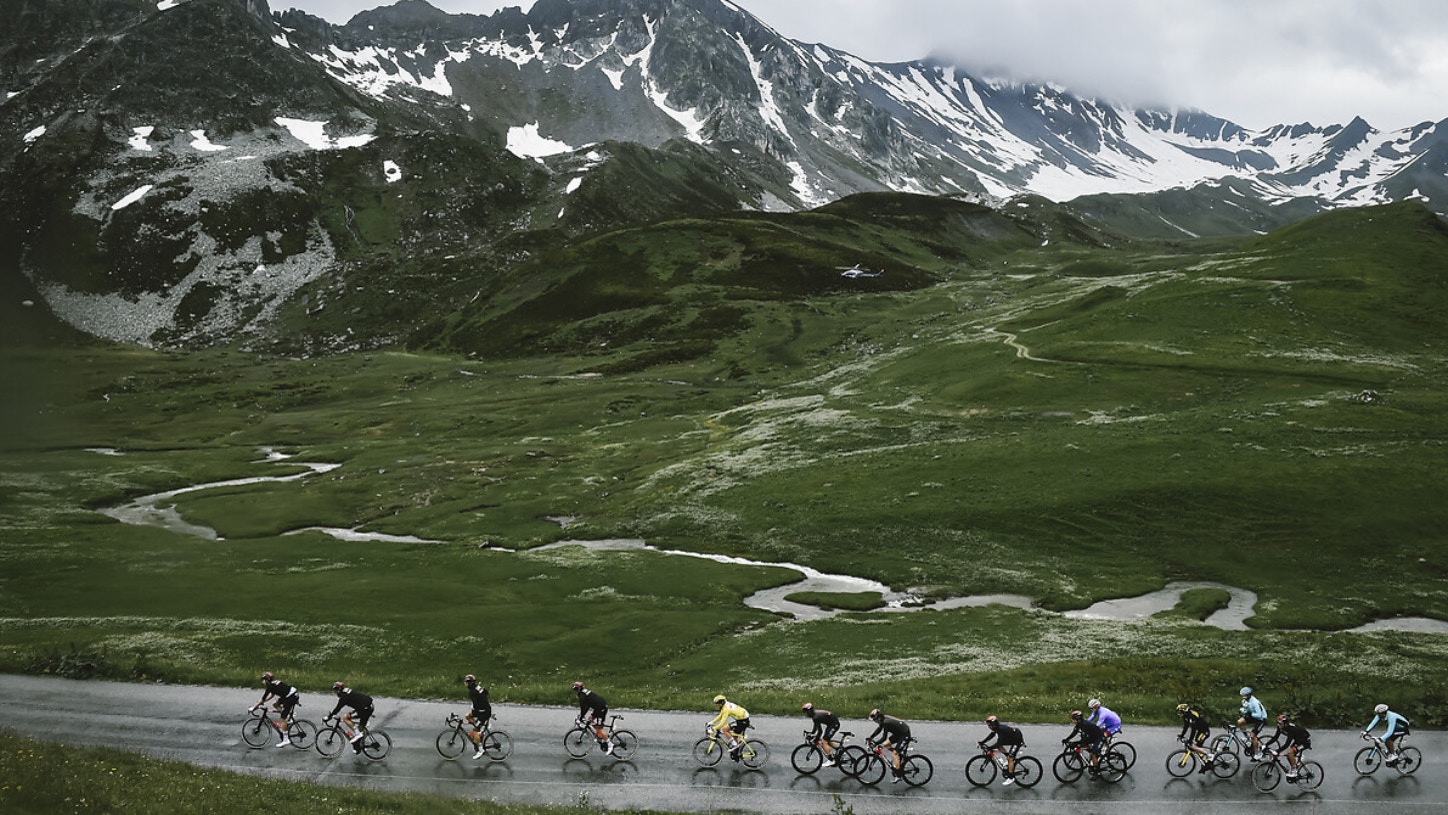 The young Aussie rode his breakaway companion Sergio Higuita (EF Education-Nippo) off his wheel to win atop the monster climb to Tignes and vault up the GC in his first-ever Tour. 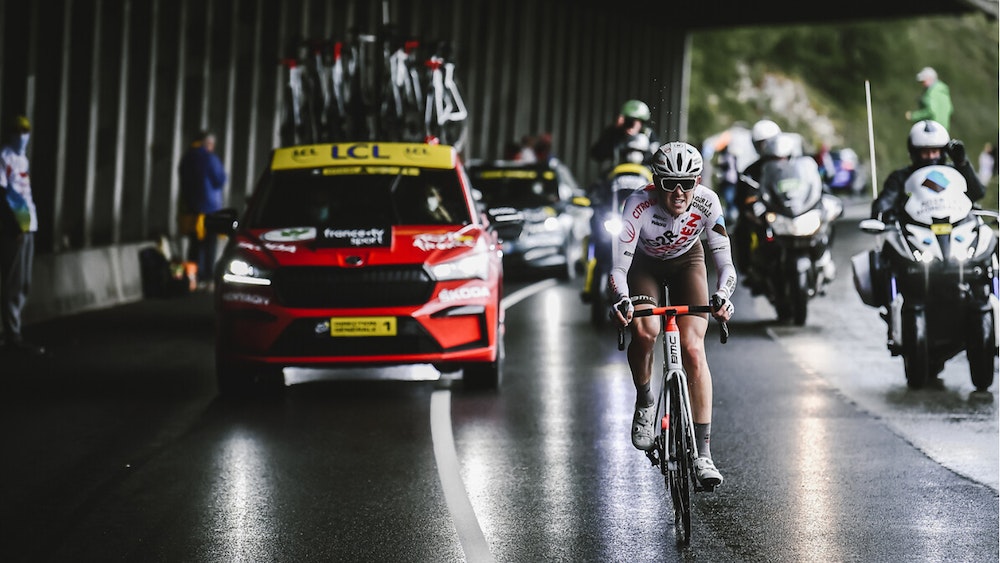 Mattia Cattaneo (Deceuninck-Quick-Step) hit out from the break in the final five kilometres to come past Higuita and claim second place. Sonny Colbrelli (Bahrain-Victorious) defied his billing as a classics sprinter to finish third.

“Just to be here was a dream, but to be here today is testament to everyone who put faith in me through the years … it’s been a wild ride, it’s mind-blowing,” O’Connor said after an emotional celebration with his team.

“This is what you dream of, it’s so fulfilling and brings so much joy. I’m loving every moment, and I’m so happy for the team, they had so much faith in me.”

Tadej Pogačar retained his yellow jersey after riding away from the GC group in the final kilometres of the tough multi-mountain stage in the Alps.

O’Connor and Higuita had taken on the 21km climb to Tignes as a pair after dropping fellow escapee Nairo Quintana (Arkea-Samsic) at the start of the marathon ascent.

O’Connor was relentless on the long grind to the ski resort, distancing Higuita at 17km to go and ploughing on alone to win by over five minutes.

“I wasn’t meant to be in the break today, but a big group went away, and I wanted to be there,” he said. “I knew that in a long hard stage like today I would have a chance to win. It’s amazing to have won.”

With O’Connor a threat to Pogačar’s yellow jersey with his long lead over the peloton, UAE Emirates had cranked the pace through the summit finish with three riders shepherding their team leader.

Ineos Grenadiers only attempted to take control at the front with around 8km to go. Carapaz briefly accelerated in a bid to regain time only for Pogačar to mark the Ecuadorian challenger and blast away from the small GC group in a crushing statement of intent. 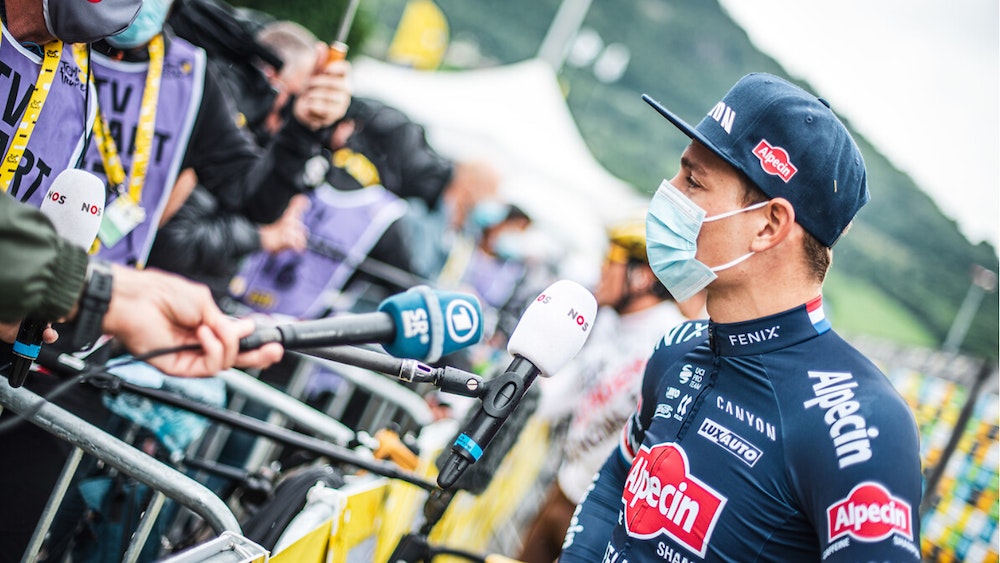 Two of the peloton’s biggest names did not start the stage Sunday. Primož Roglič abandoned, succumbing to the injuries he sustained on stage 3. Mathieu van der Poel also quit the race to rest and rebuild for a charge at the Tokyo Olympic MTB race. 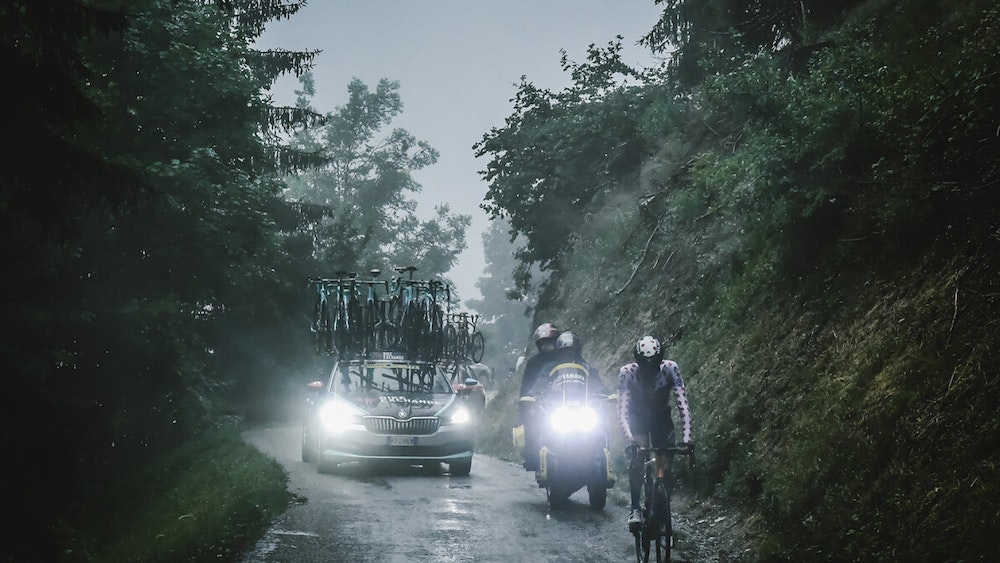 The bunch was met with another cool, sodden day in the Alps after also suffering gritty conditions Saturday.

A frantic opening 50km of the race saw Colbrelli and Michael Matthews contest a controversial intermediate sprint that where the Aussie took a wild and wayward line en route to second in the small bunch kick.

After suffering on Saturday’s stage, Geraint Thomas was struggling early in the day but rallied to hang tough in the peloton and the work on the front in the road to Tignes.

O’Connor, Quintana, Higuita Wout Poels, Michael Woods, and Lucas Hamilton attacked out of the day’s early 40-strong breakaway and Quintana, Poels, and Woods scrapped among themselves for mountains points.

Quintana pressured the break up the tough climb of the Pré and eventually clipped away with Higuita, and O’Connor bridged across shortly afterward. O’Connor had started the day at 8:13 back on Pogačar and the Aussie was motivated to push the pace as the lead trio worked up an eight-minute gap on the peloton.

O’Connor was briefly dropped by Quintana and Higuita on the long, rain-soaked descent off the Cormet de Roseland but was able to bridge back ahead of the huge haul to Tignes to set up his standout solo victory.

The team kept control through the first half of the massive climb to Tignes before Ineos Grenadiers took over at 8km to go. All of a sudden Pogačar’s teammates melted away, leaving the yellow jersey isolated – but that wasn’t enough to stop Pogačar with his searing late move.

A rest day comes Monday. After an opening week of crashes, cruel weather, and aggressive racing, the peloton will breathe a sigh of relief Sunday night.

Stay up to date with the latest from le Tour with our dedicated Tour de France Hub.