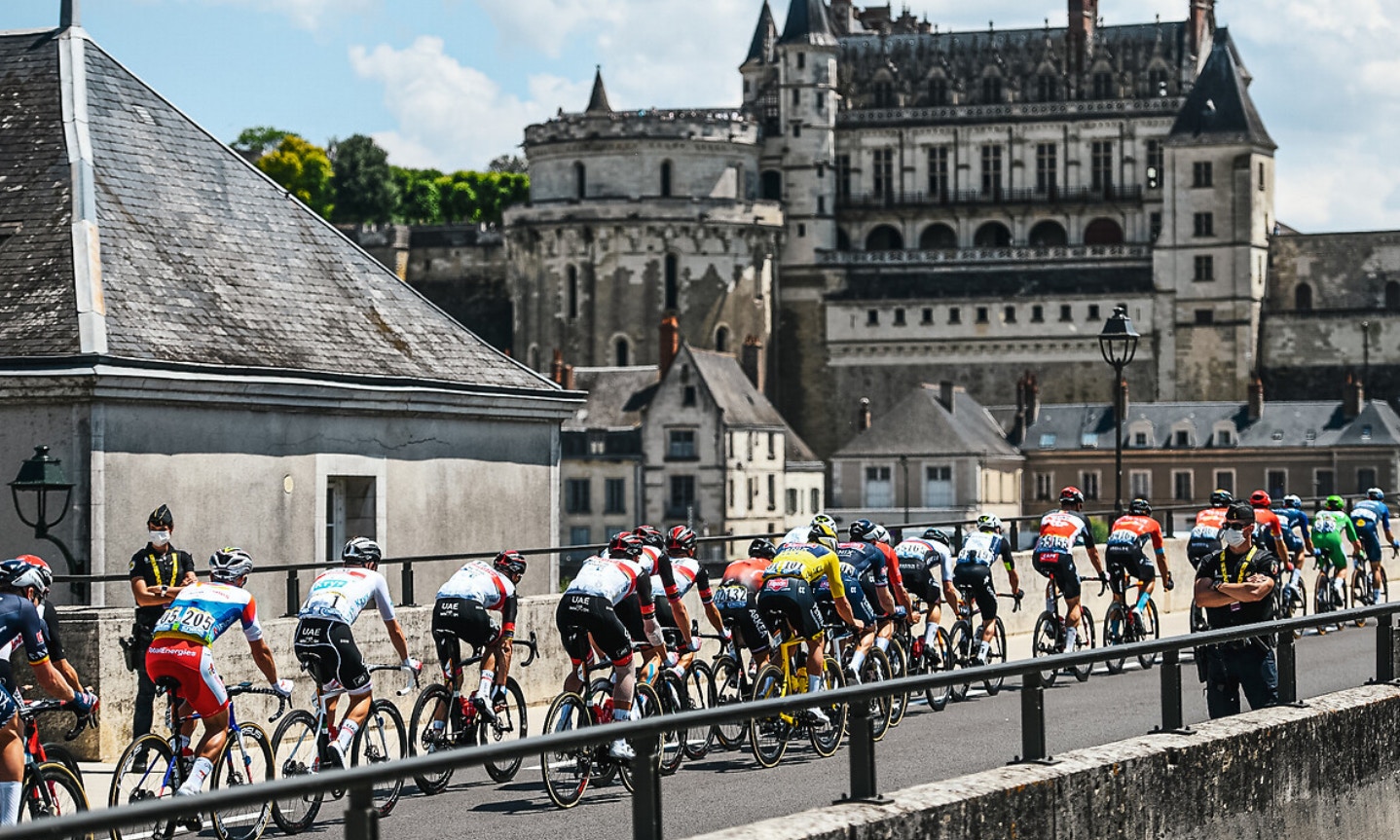 With his second win in this year’s Tour, Cavendish is within two victories of Eddy Merckx’s record of 34 career Tour de France stage wins.

“It’s [been] 10 years since I last won here. It’s pretty special. We were talking about what to do in the final because there are so many strong sprint teams here that were wanting to go on the front to take it on is a big ask because you get swamped at the finish,” said Cavendish. 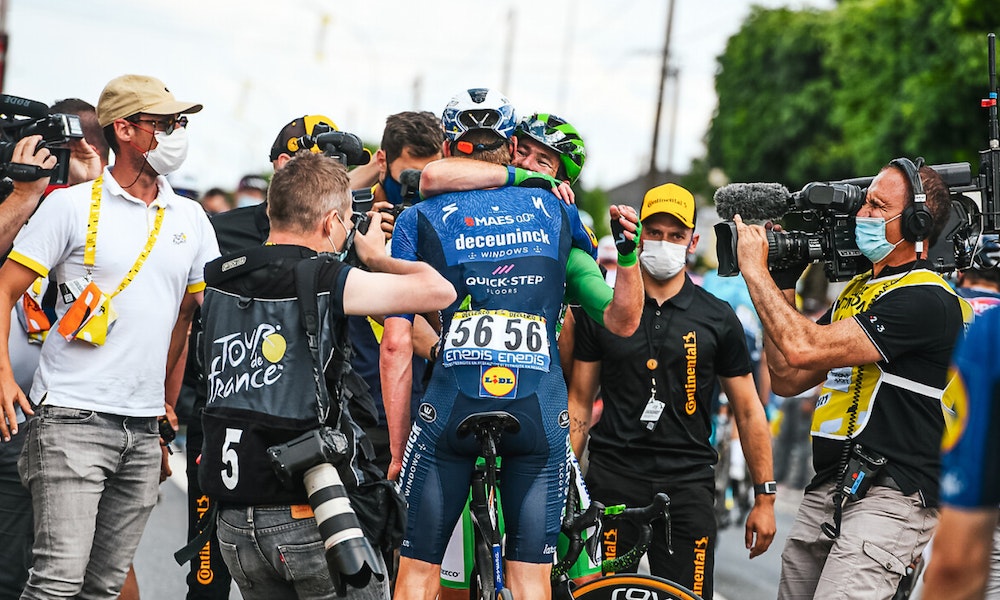 Cavendish previously won two stages that finished in Châteauroux — stage 5 in 2008, and also stage 7 in 2011. 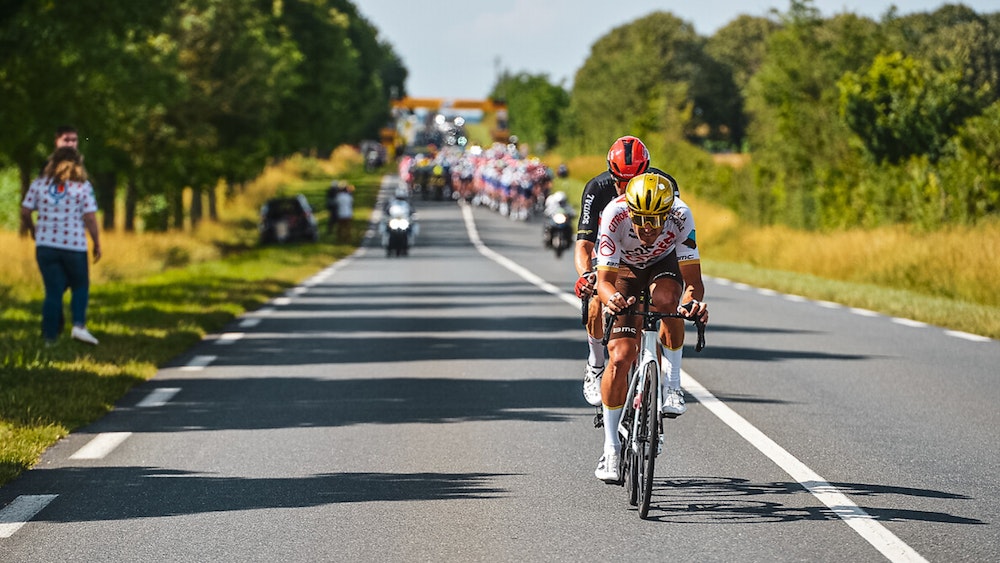 An eight-man break established itself just 4 kilometres into the stage.

This small bunch had one minute at 150km of racing remaining, and they worked so hard to bring the eight men back, they split into two groups of four over the following 15km.

Cavendish’s teammate Kasper Asgreen, 11th on the GC, worked to get Cavendish across the line in first again by disrupting the breakaway. Over the ensuing 10km, the gap to the peloton was brought back to 20 seconds.

Van Avermaet did all he could to keep the break working together to stay out front. As the others with him one-by-one “tossed in the towel,” he soldiered on, solo, until Roger Kluge (Lotto-Soudal), bridged up to the Belgian.

The two then extended the gap to the peloton from just 15 seconds to nearly two minutes at 110km to go.

Van Avermaet led through the intermediate sprint point, uncontested by Kluge. The main bunch had again shortened the leash to set up the sprinters and was just 40 seconds back.

Michael Mørkøv aggressively tried to deny Jasper Philipsen (Alpecin-Fenix), Peter Sagan (Bora-Hansgrohe), Michael Matthews (Team BikeExchange), and Nacer Bouhanni (Arkéa-Samsic), while Sonny Colbrelli (Bahrain-Victorious) took the remaining points from the far right side of the road. Cavendish did a bit of a move for the points, however, when he saw the potential for chaos, backed off.

The race never relaxed following the acceleration for the intermediate sprint points. At 40km the situation was much unchanged, with the two men remaining 50 seconds off the front. 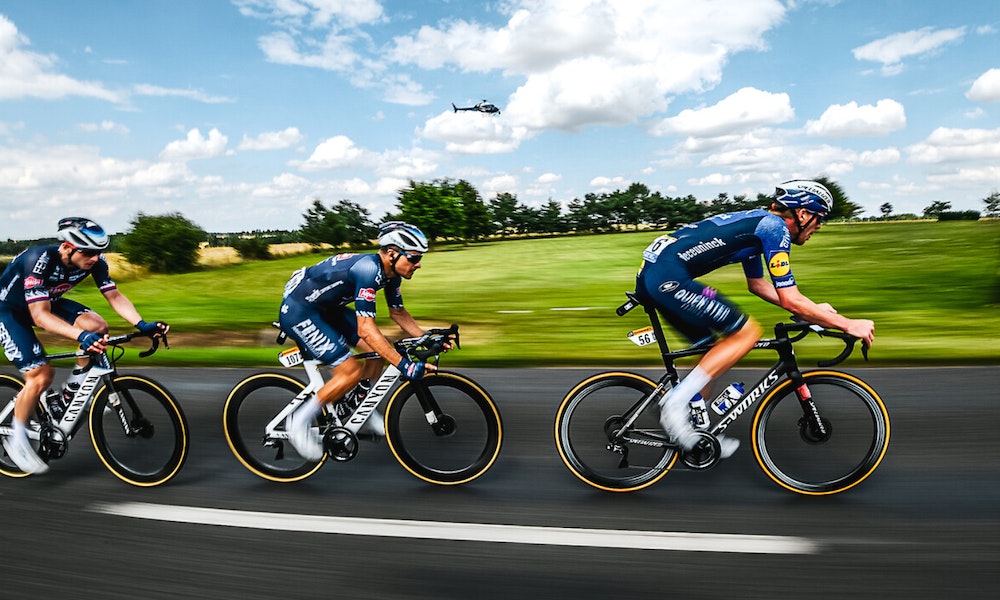 Sagan’s lead out man, Daniel Oss, had a mechanical and a bike change at 22km to go just as the main group brought Van Avermaet and Kluge to within 15 seconds.

A final, right turn at 1,200m to go, then a straightaway into the line meant that lead out trains would need to be in place well before the final three-quarter-mile straight drag.

At 12km remaining, the “Wolfpack” was all over the front, side-by-side with Movistar Team and AG2R-Citroën. With half of this remaining distance gone, Oss had made his way back to the front on a new bike, and Sagan was again on his wheel as they trailed the Deceuninck-Quick-Step train.

Tim DeClerq (Deceuninck-Quick-Step) swung off the front, his work done, and world champion Julian Alaphilippe did the work to deliver the green jersey to striking distance.

A crash at the back of the field brought down Miles Scotson (Groupama-FDJ) outside of 3km to go, but this did not affect the front of the race. Scotson would not get the same finishing time as the main bunch.

At 2.5km to go, Nacer Bouhanni (Arkéa-Samsic) was riding on Sagan’s right, and moved to the front, just as the break was caught, before a series of turns on the route.

Mathieu van der Poel (Alpecin-Fenix) dropped off teammates Jasper Philipsen and Tim Merlier in the centre of the road with 1,000m remaining, while the Deceuninck-Quick-Step train put Cav directly behind them.

Cavendish found a hole to the right of the Alpecin-Fenix train, and as Merlier and Philipsen faded, Cav timed his kick perfectly, again dropping Bouhanni in the kick to the line.

So sure of his win, the “Manx Missle” had time to sit up and celebrate with his hands in the air.

“I don’t understand why you bring a full sprint team here and not ride for a sprint. The break went with all of our guys in there, all the sprint teams had someone in there, and then all of a sudden FDJ and Arkéa panic because there is a group gone, then but then when there is a breakaway to challenge the sprint they don’t pull,” Cavendish observed. “So, they got everyone in the final there, and you expect them to come and as usual, it’s Alpecin-Fenix that share the work with us and they came with the strongest team in the end.”

Working for his teammates while also wearing yellow, van der Poel offered some insight into the stage conclusion.

“Today normally it was not supposed to be too hard, but the start was hard,” van der Poel said. “I still felt good [in the leeadout] but [Merlier and Philipsen] unfortunately lost my wheel, otherwise we would have had a good chance.”

Friday’s stage 7 is the longest of the 2021 Tour de France and the longest stage in 21 years.

The 249.1km route from Vierzon to Le Creusot takes riders over an undulating course that suits one-day racers like van der Poel, Van Avermaet, and Alaphilippe.

The first half of the stage heads due east on flat terrain, where a big breakaway is sure to form. The second half of the day, through the Morvan forest, features five climbs with almost no respite between them.

Stay up to date with the latest from le Tour with our dedicated Tour de France Hub. 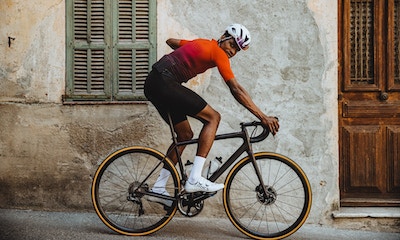 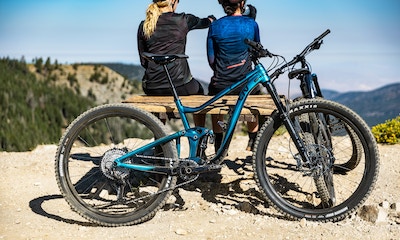