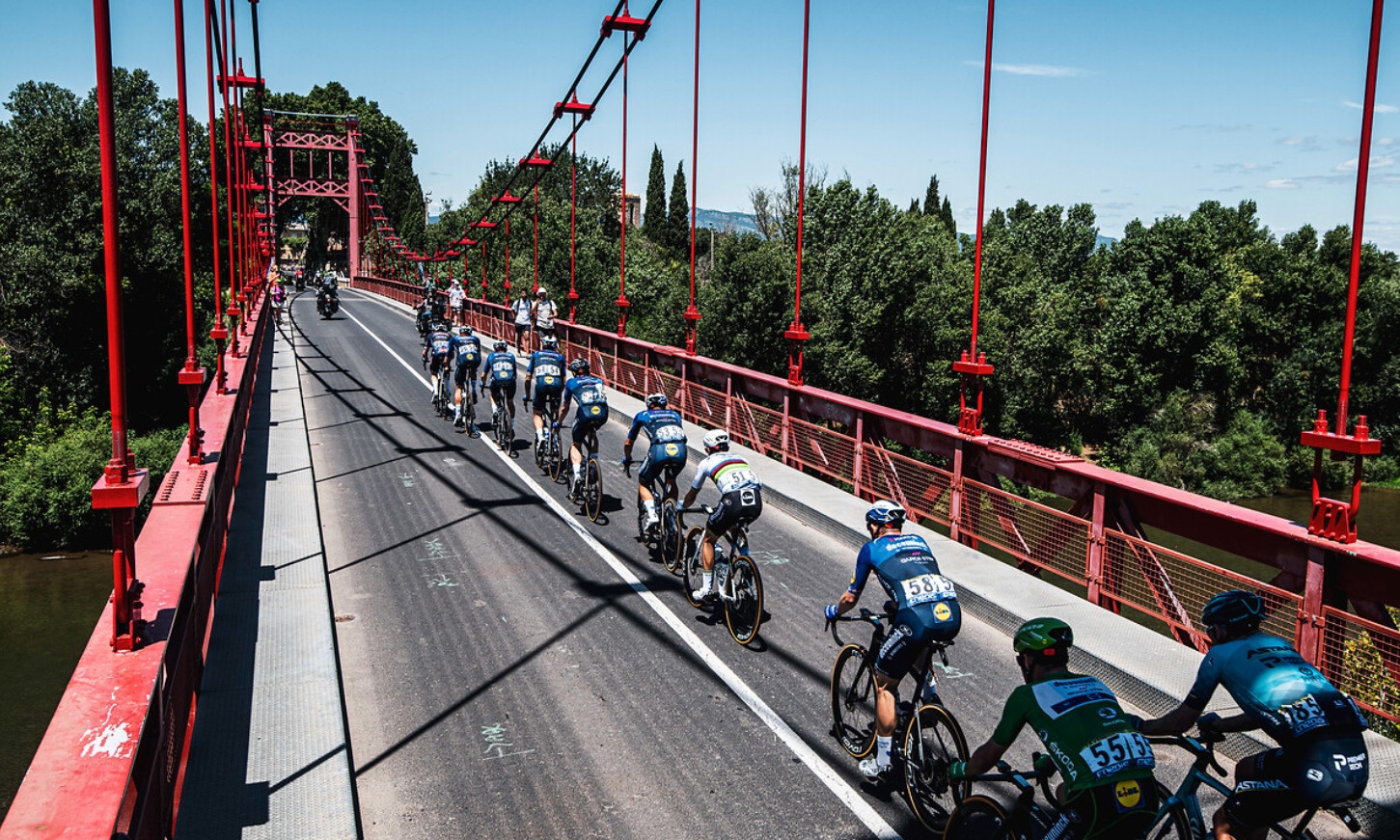 Cav won the chaotic downhill sprint to the line, after 219km from Nimes to Carcassonne, staying ahead of several crashes in the final hour of racing.

“It’s tiring. That’s it. I can’t even think about it. I’m afraid I’m so dead. 220 kilometres in that heat, that wind, that final. Woah. I went deep there, I went so deep there. The boys were incredible. I cannot believe it,” Cavendish said. 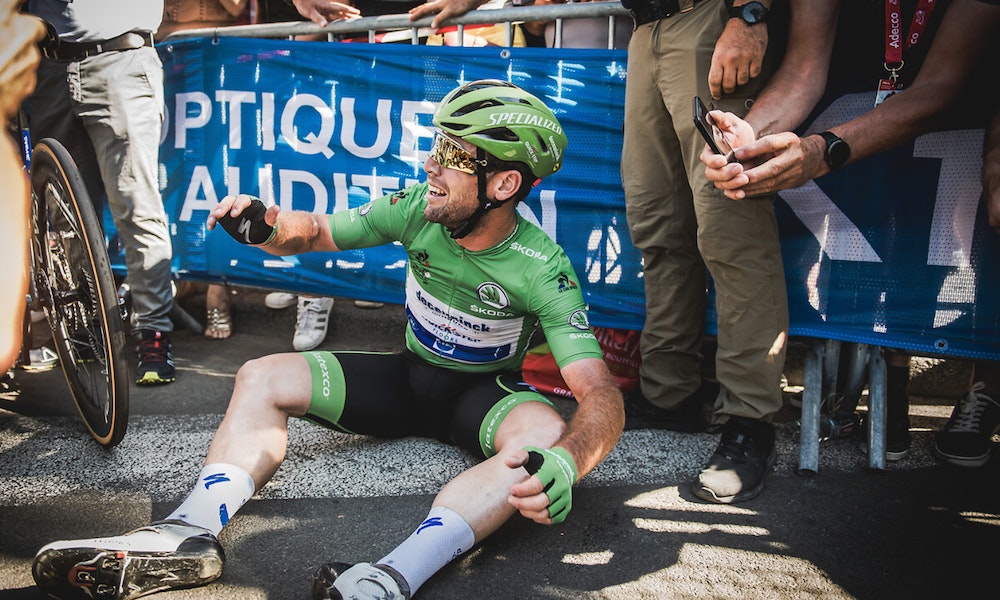 The stage 13 win was Cavendish’s fourth of this year’s Tour. 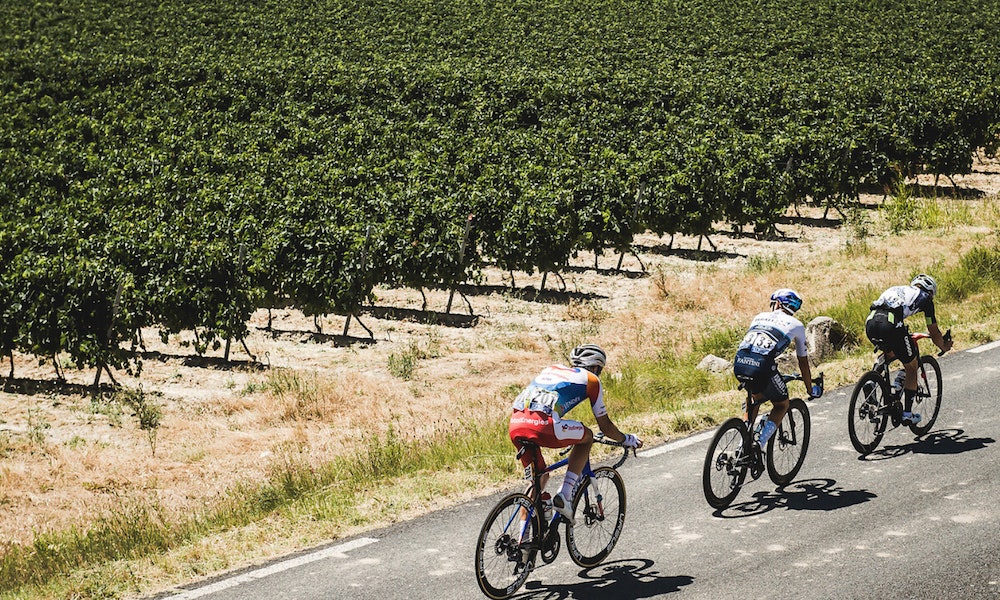 After 100km of racing, three were off the front — Omar Goldstein (Israel Start-Up Nation), Pierre Latour (TotalEnergies), and American Sean Bennett (Qhubeka-NextHsh) — battling the crosswinds at 2:42 ahead of the peloton. The trio had a maximum gap of four-and-a-half minutes, but this lead was brought down under the pressure of the Wolfpack.

The gap between the break and the bunch steadily came down, and by 100km, the margin was two minutes.

The front of the main group pressed hard on the breakaway, At 65km to go the break attacked itself, and Bennett was dropped by Latour and Goldstein, who had designs on staying away from the main group for as long as possible.

A crash at the back of the bunch took down a dozen riders at 62km to go. Tim de Clerque who does a massive amount of work for Deceuninck-Quick-Step was caught upon this big tumble when riders rolled over gravel on the shoulder of the road around a bend to the left.

Søren Kragh Anderson (Team DSM), Nacer Bouhanni (Arkéa-Samsic), Simon Yates and Luke Durbridge (both Team BikeExchange) were also caught in the crash, as was 2018 Tour winner Geraint Thomas (Ineos Grenadiers). Yates suffered for some 5km more before he abandoned the race along with Roger Kluge (Lotto-Soudal), leaving only four of his teammates remaining in the race.

On the news of the crash, Wout van Aert (Jumbo-Visma) went to the front to put pressure on the Wolfpack, and the attacks started to fly while the group was just 40 seconds behind the two men remaining on the front of the break.

Mads Pederson and Toms Skujiņš (both Trek-Segafredo) went to the front and ratcheted up the pace to try to put pressure on Cavendish, who stayed in the shelter of teammate Julian Alaphilippe, in the world champion’s colours.

With the peloton breathing down their necks, Latour and Goldstein shook hands at 53km, right before they were scooped up by the bunch.

Quinton Pacher (B&B Hotels) escaped off the front with 45km to go when the peloton was recovering from having just brought back the previous break.

Cav’s plans seemed to be in jeopardy when he needed a bike change at 38km to go due to a flat tire. However, a quick change for the Quick-Step rider had him back in the race.

With 25km to go, Pacher had put nearly 45 seconds into the group that contained the four leaders of the jersey competitions. This was his maximum advantage, as the teams with riders who had GC ambitions — Ineos Grenadiers, UAE-Team Emirates, EF Education-Nippo, and others — came to the front to keep their favoured teammates safe.

Another crash caught two Qhubeka-NexHash riders at the back of the race at 22km to go, and this caused a split in the race, greatly reducing the size of the group pursuing Pacher.

From 20km to 12km, no single team controlled the race, with the GC squads and sprint trains all entangled, using any paved or grassy surface to find the safest position. 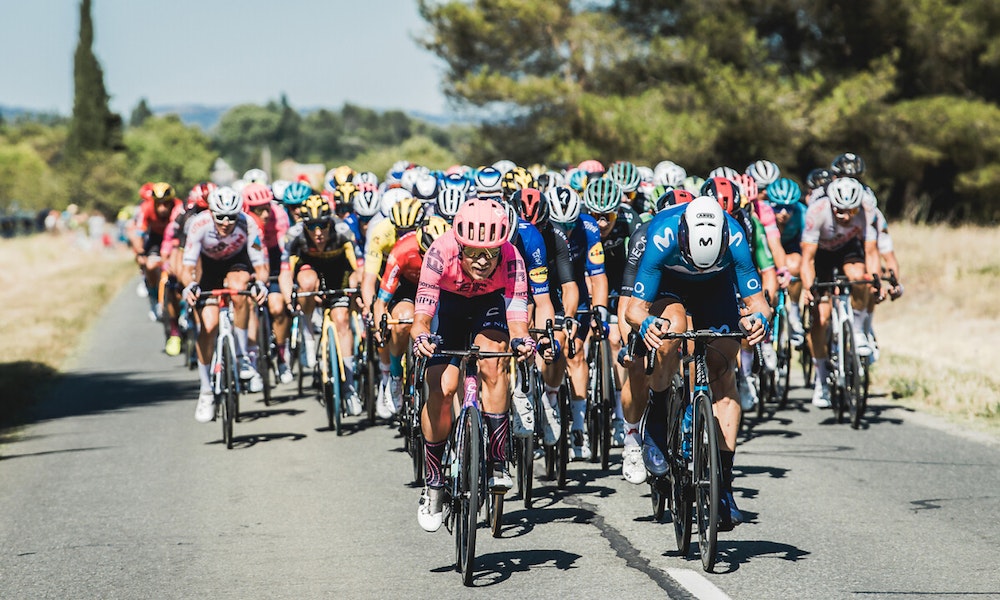 At 7km to go, the several dozen riders on the front navigated narrow and twisting roads in the ancient city of Carcassonne. Pacher had already been brought back, and the fastmen were jostling for position near the front, as Ineos-Grenadiers, EF Education-Nippo, and UAE-Team Emirates teams backed off the gas.

The Deceuninck-Quick-Step train had re-established itself but was shadowed by Team DSM and Bahrain-Merida. At 4km to go, the new “safe-zone” (should a crash, mechanical, or flat occur a rider would be given the same time as the main bunch) for stage 13 only saw the GC riders slip backward as the sprinters reestablished themselves.

Van Aert and Sonny Colbrelli (Bahrain-Victorious) came to the front with 1.7km to go as the speed increased.

The final 1,000m was a dead straight run-in. The blue train of Deceuninck-Quick-Step re-formed ahead of Cavendish.

Riders from Bahrain-Victorious, Team DSM, Jumbo-Visma all swarmed the front from 800m to 500m to go.

Just inside of the 500m to go marker with the front of the race in chaos, Cav’s leadout man Michael Mørkøv came from one side of the road, and Cav from the other. The two came off of David Ballerini’s wheel, still gaining speed, and passed Team DSM who had tried to deliver Cees Bol to the line.

Seemingly coming from nowhere, Cavendish emerged from several wheels back and stuck himself to Mørkøv’s wheel from 150m until the last moment with the Dane swung off to let Cav come through the finish first. Mørkøv continued to press, and even stabbed his bike at the line, into second place, denying other riders any points in the green jersey competition.

Cavendish demonstrated why he is one of the best sprinters in the history of the Tour, finding a hole, and sticking with his leadout man to take another stage win, and equalizing the record set nearly 40 years ago by Eddy Merckx.

“Ballerini was there, and Cortina went and had a good jump. I was lucky I had Mørkøv there to drag me back. I lost a little on the last corner, I thought I had punctured,” Cav said.

The first stage in the Pyrénées starts with 60km of undulating roads which may see a break put time into the main bunch. The stage ends after a 12km descent followed by 3km in the streets of Quillan.