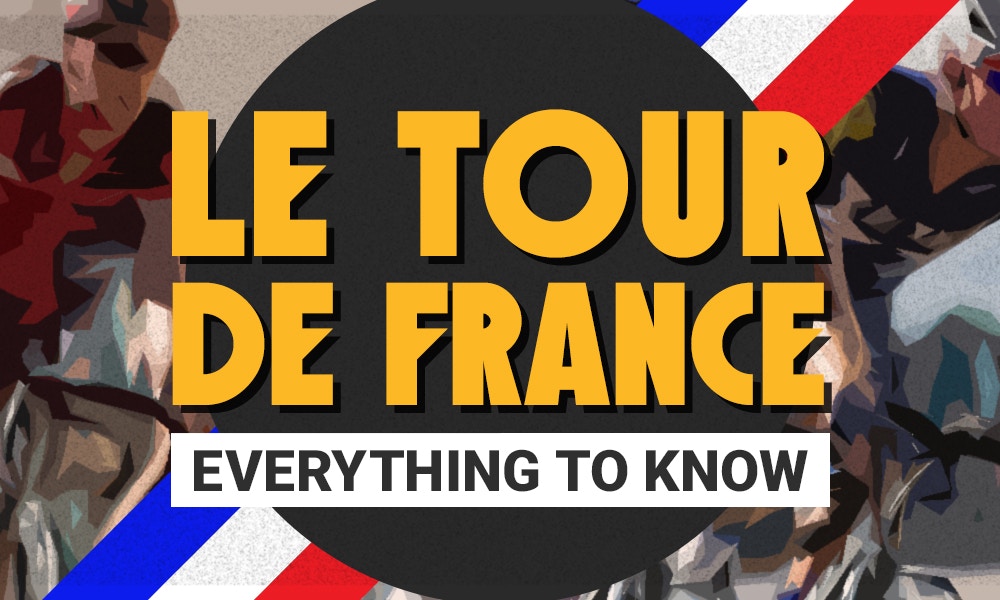 The Tour de France is the world’s largest annual sporting event comprising of almost 200 riders, covering in excess of 3,300 kms over 21 race days and reaches a television audience of 3.5 billion viewers each year.

The flag was dropped to start the first edition of the tour at 3:16 pm July 1, 1903, after an elaborate plan from local newspaper L’Auto to create a cycling race across France that would capture the hearts and imaginations of the French (and also increase their readership).

The Tour de France primarily navigates its way around France but surrounding countries including Andorra, Belgium, Great Britain, Germany, Ireland, Italy, Luxembourg, Monaco, Netherlands, Spain and Switzerland have all featured in the race route at some point.

The Tour de France is simply referred to as ‘The Tour’ or ‘Le Tour’ and is the second of three Grand Tours (the Giro d'Italia the first and La Vuelta a Espana the third) on the WorldTour calendar. The Tour is the oldest of the trio, and widely renowned as the most prestigious of the three.

Stage locations change from year to year but the format remains consistent; a mixture of flat and mountainous stages, time trials in the form of individual and team, and since 1975, a finishing stage on the Champs-Élysées in the heart of Paris.

Each year the rider with the lowest accumulated time for the 21 stages wins the Tour de France and collects the Maillot Jaune (yellow jersey). In addition to the overall winner, there are three other sought-after classifications to reward riders for their efforts; the mountains (red polka dot jersey), points (green jersey) and young rider classifications (white jersey).

In addition to these individual classification accolades, there is also a team’s classification and a most combative rider award for the rider who showed the largest fighting spirit across each stage of the tour. 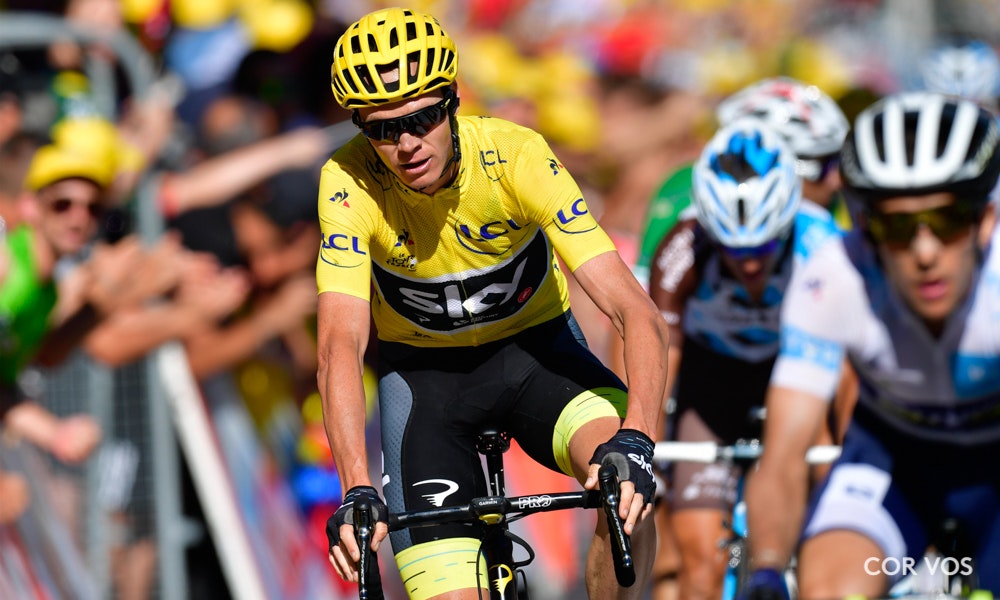 The general classification is the overall competition awarded to the rider with the lowest accumulated time across the 21 stages. The Maillot Jaune is the most coveted prize in professional cycling alongside rivaled only by a World Championship title or an Olympic Gold Medal. The color yellow was chosen to pay homage to the yellow paper L’Auto newspaper was printed on. Riders wearing the yellow jersey will often have custom details on their bike to not only show off their standing in the race but also showcase sponsors products associated with the race leader. 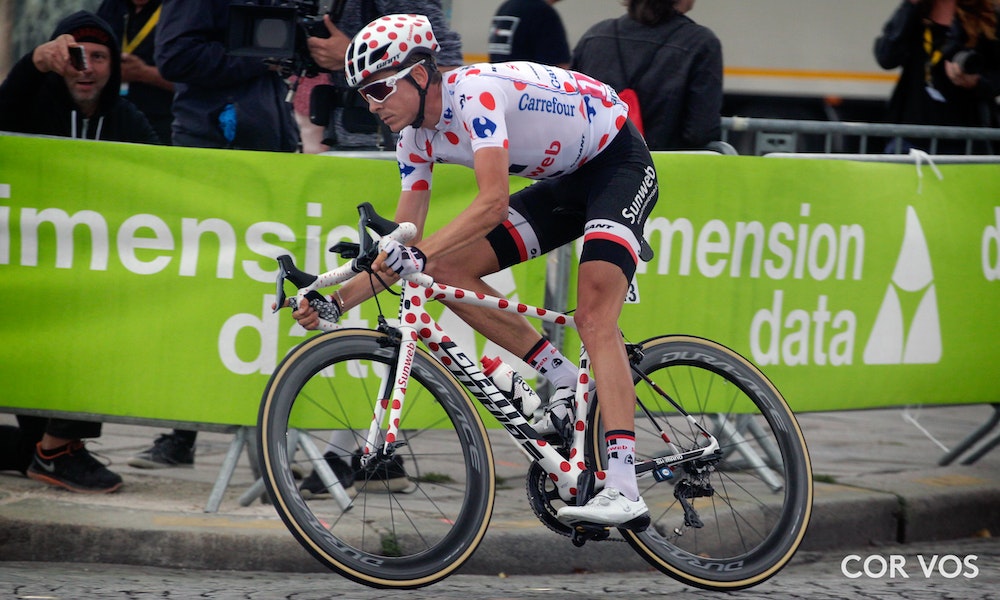 The leader in the mountains classification is represented by the Maillot à Pois rouges or polka dot jersey. Points in the classification are awarded for reaching the top of selected categorized climbs with points allocated to riders first across the top.

Points allocated to each climb differ depending on the difficulty of the climb. The most difficult climbs otherwise known as 'HC' or 'Hors Categorie' climbs (a French term meaning beyond categorization) are awarded the most amount of points. Category 1, 2, 3 and 4 climbs will have decreasing points allocated to them and fewer positions available to earn points. 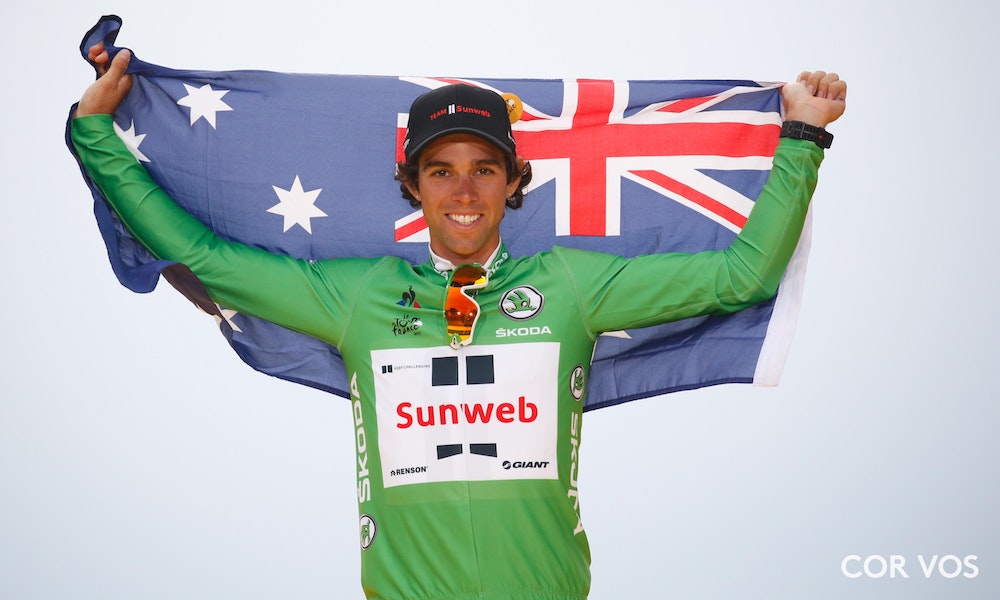 The leader in the points classification is represented by the Maillot Vert or green jersey. It’s commonly known as the sprinters' jersey. Points are awarded at the finish line or at specific locations along each stage, commonly known as intermediate sprint points. Points accumulate along the way and the rider with the most amount of points at the end of the Tour wins the classification. It’s a jersey hotly contested among the sprinters, who typically carry a little too much muscle mass to be competitive in the mountains. 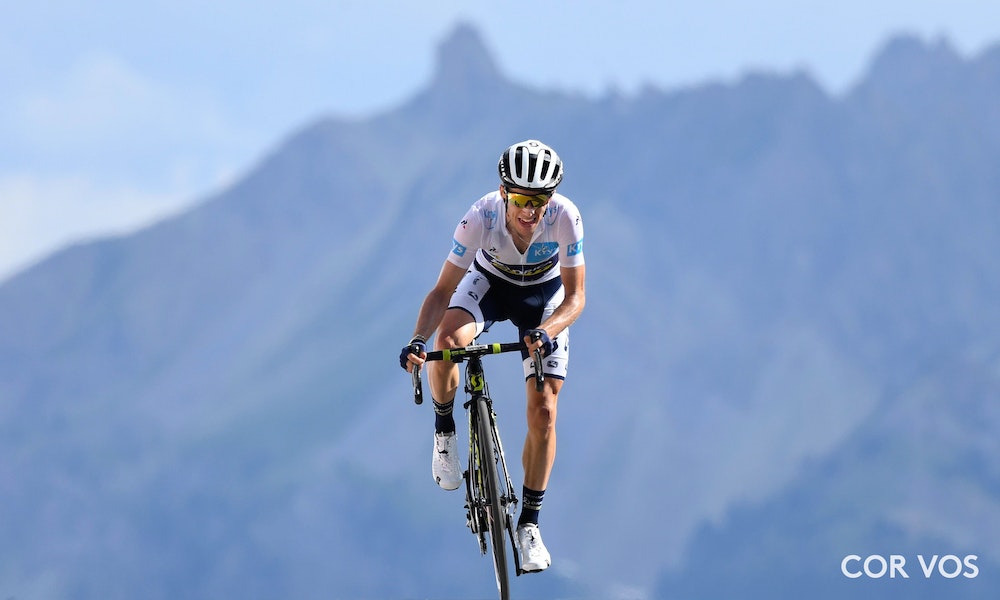 Prior to 1975, in place of the white jersey was the Combination Classification. This was handed out to the rider with the highest position across the general classification, points and mountains classification. 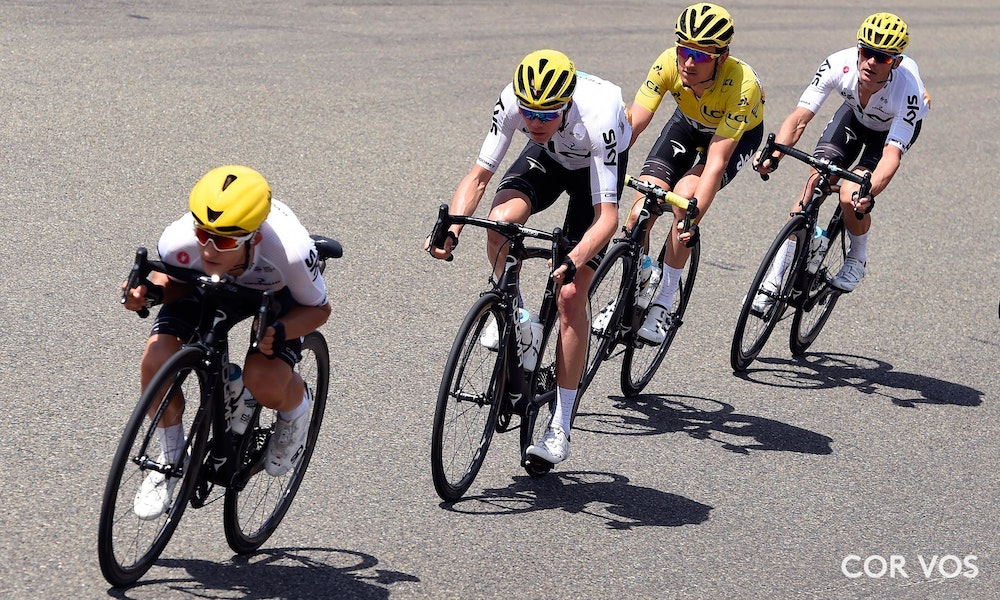 The Teams Classification is won by the team with the lowest accumulated time, a result of adding the times of the three best cyclists per team on each stage. The team leading the classification will wear yellow numbers instead of the traditional white numbers. You’ll often also see the leading team proudly wearing yellow helmets. 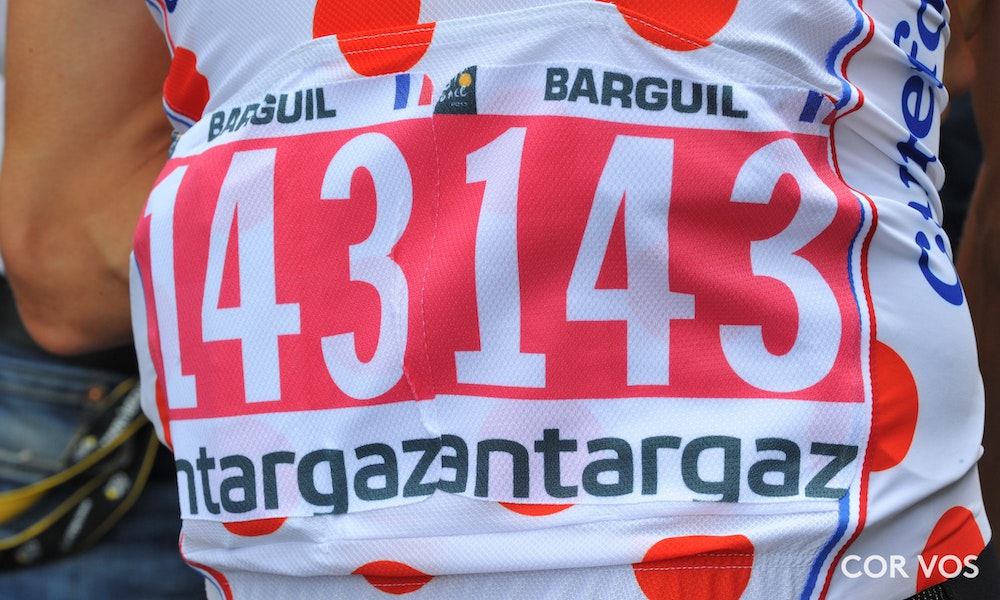 The most combative rider is awarded by a panel of judges to a rider that has stood out on each stage of the tour. Handed out on completion of each stage, a rider might win the award because they were in the breakaway all day, was the last rider to attack or did something else notable during the stage. Michael Matthews famously won the most combative jersey on stage five of the 2015 Tour after finishing the stage despite two broken ribs he suffered as a result of a crash on stage 3. The most combative rider from the stage will wear a red number the following stage. 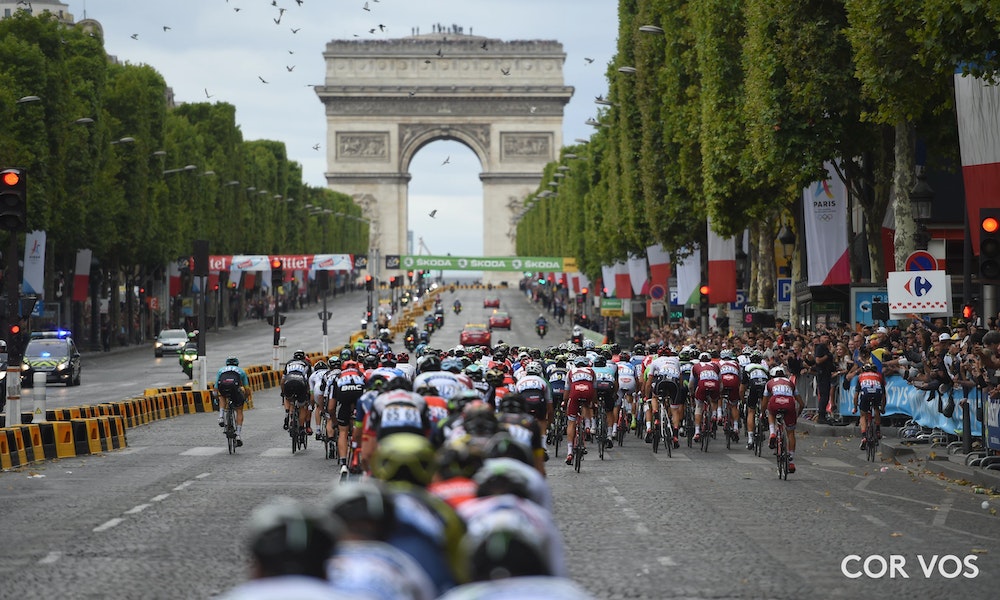 Each year 3.5 billion people tune in to watch the Tour over the 21 stages via 188 broadcast countries and 121 different channels. The coverage comprises of almost 5,000 hours of content which grows every year. On top of the enormous television audience, over 12 million spectators are expected to line the route.

The closest ever winning margin of the Tour was by Greg LeMond over Laurent Fignon in 1989 by a mere 8 seconds! Contrastingly, the largest winning margin set back in 1903 between Maurice Garin and Lucien Pothier was 2hr 49min 45 seconds.

The total prize pool for the 2017 Tour de France was a whopping €2.29 million. The winner (Chris Froome) received €500,000 while every rider that participated in the Tour at least went home with €400 in addition to their salaries.

Mark Cavendish holds the record for the most stage wins (not including time trials) at 30, while Eddy Merckx holds the most amount of total stage wins with 34 (16 of them time trials). Thanks to his remarkable winning record, Eddy Merckx has worn the leader's yellow jersey for 96 stages of the Tour, the most of any rider in history.

41 kph was the average speed on the 2017 Tour, which is nearly 1 kph slower than the fastest ever Tour average speed. That record is held by Ivan Basso who averaged 41.79 kph in 2005. 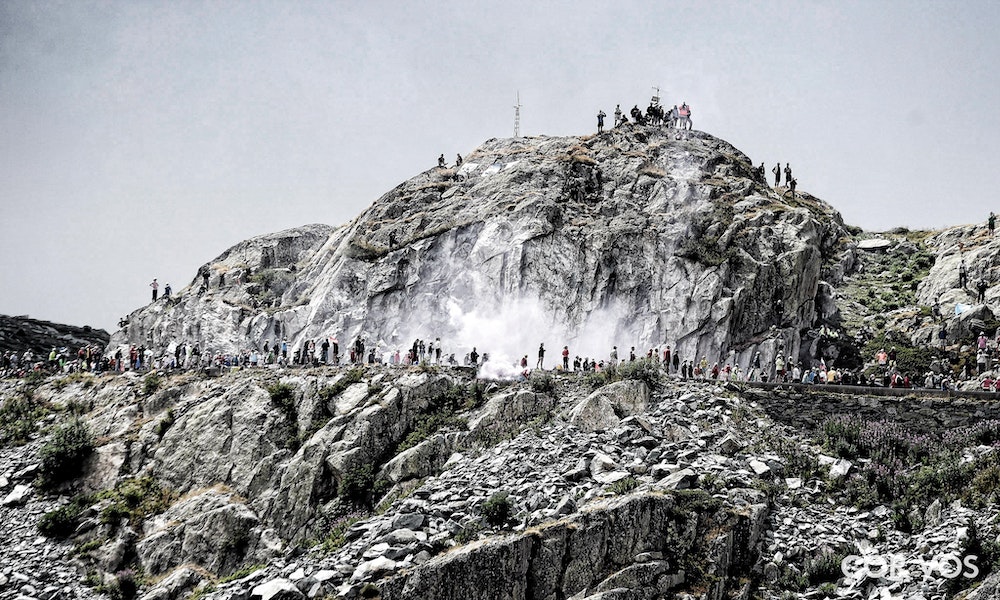 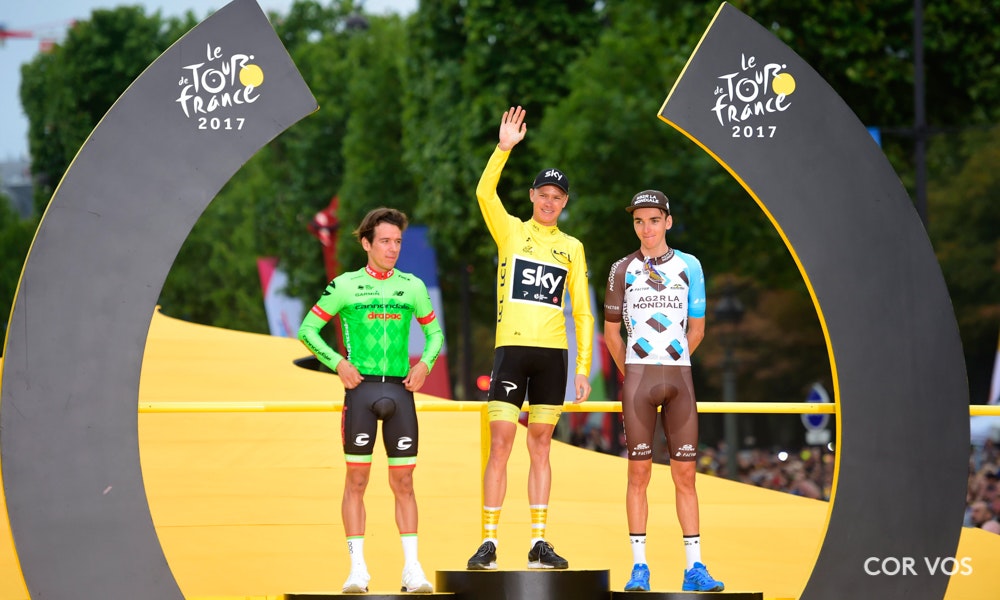 The 2018 Tour de France starts on Saturday, July 7th in Vendée department, in the region of Pays de la Loire with a 189 km flat stage. The traditional Champs-Élysées finish will take place on Sunday, July 29.

Time trials will be influential in deciding the general classification winner, 76.5 km in total split into 35.5 km on stage 3 and a hilly 31 km on stage 20.

Time bonus seconds are back up for grabs. Time bonuses of 10, 6 and 4 seconds allocated for the first three finishers of each “normal” stage. A new point scale for the Points classification will also be in place with more emphasis placed on winning a stage.

Defending champion Chris Froome will be back to try and win a fifth Tour de France title, but he will have strong competition from Adam Yates, Nairo Quintana, Rigoberto Uran, Richie Porte, and possibly even his own Sky teammate Geraint Thomas. 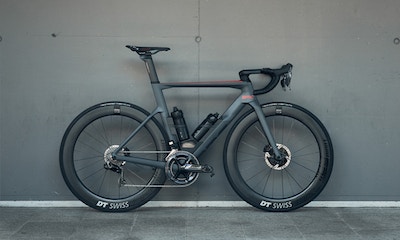